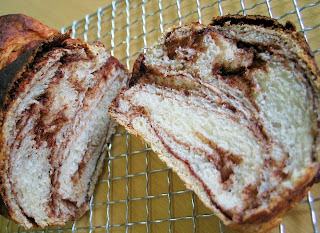 Ventured into making this challenging Chocolate Swirl Bread this morning.

When I first saw this recipe, posted by Ida of Baking Fiend, I thot I should only give it a try after I am more comfortable with bread-making. With the little success I had earlier with my wolf berries bread, I though I should be able to manage, although this is only my 4th attempt in bread-making. Little did I know, it turned out to be a really challenging task!

After more than 30 mins of continuous kneading, the stubborn dough still remained very sticky! Since I had already gone so far, I refused to give up. I continued to wrestle with the dough for another 10 more mins and it became less sticky and slightly smoother. By then, I was too tired, and had to surrender to the dough...I left it to proof, hoping for the very best.

I took out the chocolate filling which I made last night and tried to follow the instructions to wrap the dough with it. It appeared easy before the actual hiccup surfaced. While trying to roll the dough to the required size, the chocolate paste came oozing out. I tried to "patch" out with dough from the other sides, but it didn't really help. I quickly folded the dough as instructed and left it in the fridge for an hour...hoping it would help to freeze up the chocolate paste a little. The final step was real messy...I had the dough all covered with chocolate paste, after trying to twist and plait it...and the dough really looked horrendous!!!

Since I was already at the final step, I give it a shot and sent the dough into the oven after the final proofing. As I was attending to my younger son, I didn't have a chance to remove the bread from the oven on time. The top was almost burnt :'(

Naturally, with so many hiccups along the way, I wasn't able to achieve the numerous beautiful swirl as compared to those made by Ida. Luckily, other than the slightly burnt crust, the texture and taste of the bread was surprisingly good...soft, light, airy, and almost feathery! Half of the loaf was gone by tea time and my elder boy gave me a rating of 4.5 out of 5 stars :)) 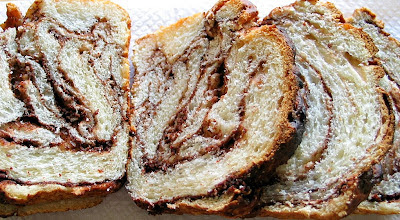 It was only after making the bread that I managed to get to the original recipe in Japanese. The photos posted on the Japanese website will certainly help to give a better idea how to roll and shape the dough correctly in order to get the nice swirls. There is also a tip that says to cover the top with foil when the bread starts to brown to prevent it from getting burnt.

Thanks for posting this. I was able to access both the recipe site and the Japanese site with photos and now I feel prepared to do it!
~Vicci

Hi Victoria, thanks for popping by!
Just to let you know, the dough happens to be rather sticky and you'll have to make sure the chocolate paste is quite firm. Looking forward to your blog posting on this :))

Hi kwf, on the contrary, I thot yours look better :)
Yes, you will have to make your own paste...if u use nutella, it will be too soft. Do take note that when u make the chocolate paste, you have to make it until it is very thick and dry...the consistency should be something like a red bean paste...thicker than jam/kaya. Hope you get what I mean.

Hi,
I'm new to your blog and I'm impressed with all your breads and bakings....

I've tried baking this bread and the texture was not very soft and the top of the bread was actually hard kind...is this suppose to be the right texture?

Hi Vanessa, this bread is quite soft, and although there is a crisp to the crust, it is not hard like those baguettes. Hope I have answered your doubts?

Wow kind of complicated! I skipped the milk powder as I had none, I used milk instead. I also started too late in the afternoon to do all the fridge time. It is still soft and light, but not as airy.

I had a fright during the second round of folding as the chocolate burst from the dough and looked very scary. It clearly didn't form a solid enough paste.

However it is tasty and soft, and well marbled inside. Next time I will make it sweeter and change the chocolate to get a more chocolatey flavor.

Hi, May I know what brand of bread machine are you currently using? I was using a breville one but it broke down and I thought of changing to a new one. Please advise. Thank you.