Just a loaf of bread 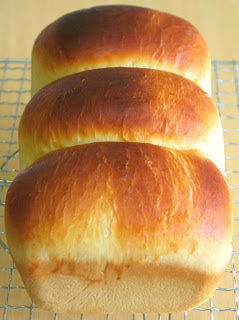 It's been quite a while since I last made a bread. I've wanted to try making one last week, but due to the rainy weather, I didn't attempt. I doubt the dough would rise properly when the weather was so cooling. My friend has told me that I could leave the dough in the oven (turn to a low temperature) to proof, but I was afraid that I might "kill" the yeast. Not that I am afraid of failure, but I didn't want my energy spent on 25mins of continuous kneading gone to waste ;p

I bought a loaf pan last week just so that I could make a loaf of bread. So far this is my 3rd attempt in bread-making. I made buns previously. This is my first try on loaf making. I was very happy with the result. The loaf looks so "traditional", like those bread made by traditional bakery shops.

I saw a toast bread recipe from this site and thought what a wonderful idea to have wolf berries (枸杞子) in the bread as they are supposed to be good for vision. I didn't follow the bread recipe as it didn't state how the texture of the bread will be like. I used the sweet buns dough instead, as my kids prefer breads that are soft and fluffy.

The effort spent on kneading the dough was really worth it. After popping the loaf into the oven, in no time, my kitchen was filled with a familiar aroma of fresh bread baking...just like the alluring aroma coming from a bakery. The bread is soft and fluffy, but somehow, I couldn't achieve the same kind of "swirl" inside the loaf as shown by this photo. Nevertheless, I thoroughly enjoyed the entire bread-making session this morning. This little success really gives me the boost to try more challenging bread next time. 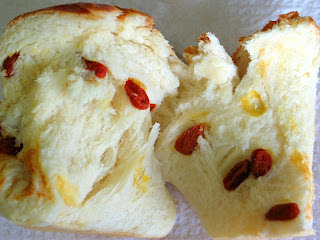 Your loaf of bread is just perfect :) It sure looks soft and fluffy. I missed bread making after seeing your post. Hopefully when I get the time, I can make one.

Hi SH, this look so soft and fluffy. I'm gonna try this recipe real soon. lolz... I couldn't resist a soft loaf of bread, can I? =)

Hi Angie, thanks for dropping by :)
I like those rustic and country-style bread you have made. However, I won't be trying them soon, as my kids can't really appreciate the texture yet :(

Anne, I understand...I must "time" my bread-making session, so that the kneading, 1st proofing, 2nd proofing, etc, don't clash with my other chores and duties ;)

Hi Jacelyn, do try it! The bread is still soft this morning, although, it's a bit compact if I slice them into slices...got to eat by "tearing" the loaf into bite size, then it will be fluffy. Maybe this recipe is not really meant for loaf, more for buns?

hello!
you have got a nice blog!
inspired me to wanna be a 'can-cook' mum in th future!

its nice to watch your love ones enjoy the food you make!

Hi there, thanks for dropping by! I can't really cook ;) I am lucky that my family members are not picky eaters, they'll just eat whatever I cook...even if it is not nice ;D

Hi Hi, Can i check with u, can we bake from normal oven(for baking cakes) or need to hav a oven thats only bake bread?

Hi Samantha, you can bake the bread in a normal oven, you don't need a special oven. Happy Baking!