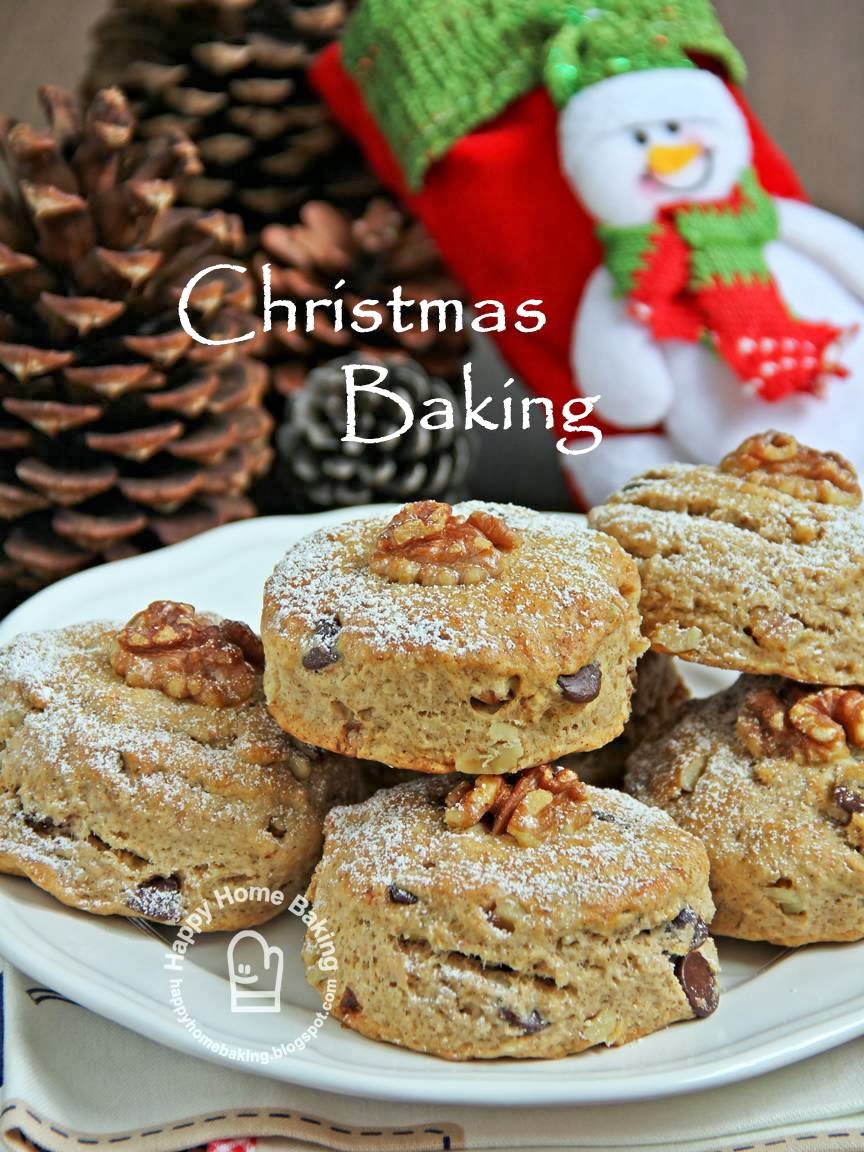 It was a quiet and peaceful Christmas eve. There was no Christmas dinner or any junk food party last night. In fact, this is the first time we are not spending the Christmas with my better half. He is away and had to work through Christmas and didn't get the chance to get back to the hotel until the early hours of Christmas day.

Being a positive person, it means I didn't have to prepare anything special for Christmas night. It was a golden chance for me then, to keep myself busy baking on Christmas eve :)

I managed to make a batch of scones and a test batch of hotdog corn bread which I will share in my next post. 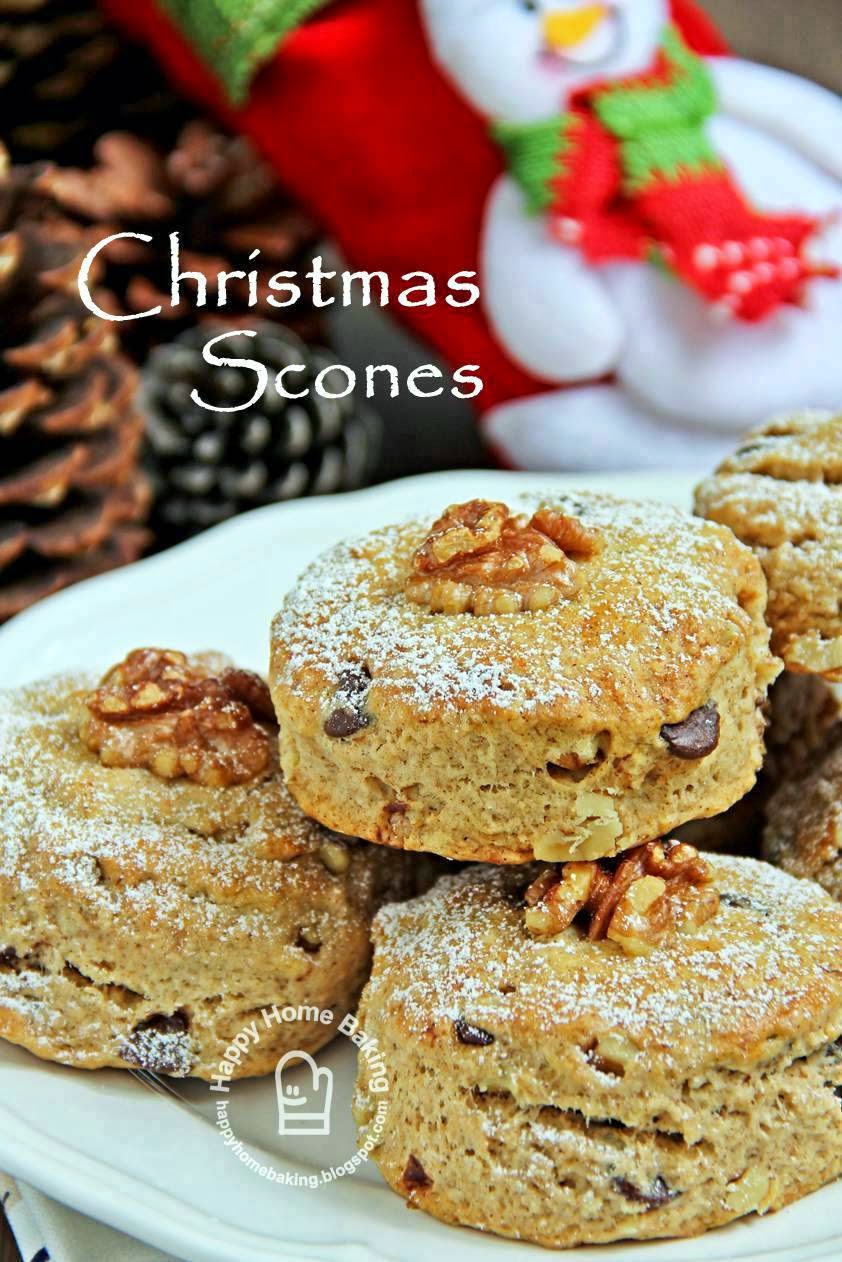 I tweaked the original scones recipe from a cookbook to suit the festive mood. By simply adding some ground cinnamon, walnuts and a light dusting of icing sugar, these scones are great to serve on Christmas day. It would certainly be nice if I had some dried cranberries, but too bad I ran out of any type of dried fruits(!) and had to settle with chocolate chips instead. On hind sight, I believe they would be cuter if I had cut them into smaller rounds. 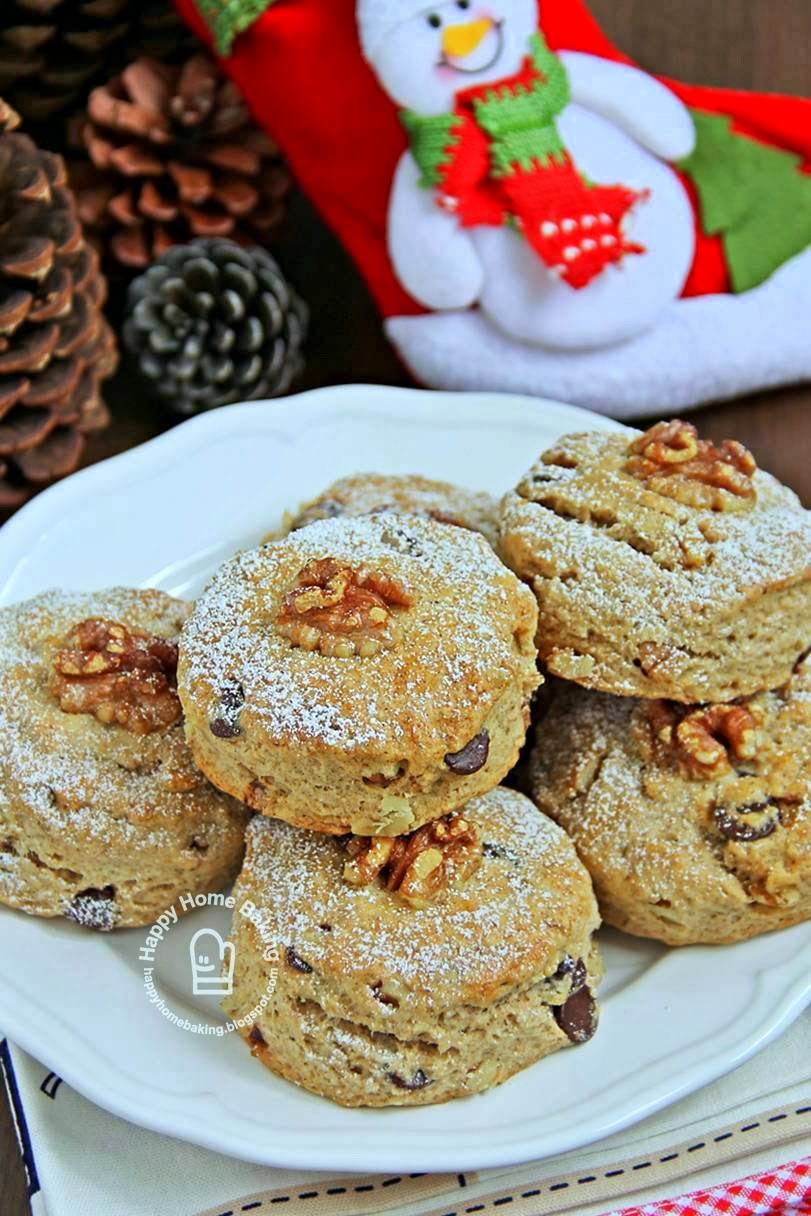 Never judge a scone from its appearance...I am speaking for myself. I was quite certain that I may have to feed the bins with these bricks of doughs when the exterior 'feel' hard and 'rocky'. Due to the ground cinnamon, they appear a little over baked too, giving the false impression that they would probably taste like cardboard, hard and dry. Thank goodness, after the first bite, it proves that my worries are completely unfound! Unlike the crust, the crumbs is soft and tender. The scones are buttery, yet, without leaving any greasing aftertaste. I adore the walnuts, chocolate chips combo and I am so glad that the cinnamon flavour is not too over powering. These scones taste good enough on its own, without any jams or cream. I had two of these big, delicious scones with my cup of breakfast coffee on a lovely Christmas day. I will always remember this morning in years to come, even if my memories fail me, I can always come back to read this post.

Merry Christmas and an early Happy 2014 to all!

I am submitting this to the "Baby Sumo's Christmas Recipes Collection 2013" event which is hosted by Baby Sumo of Eat Your Heart Out.

Method:
Note:
*Scones are best served freshly baked. Any leftovers can be kept in airtight container. Brush or spray some water over the scones and warm them in the oven before serving.

Recipe source: adapted from Scones and Biscuits by Morioka Ari

It has been a really busy and eventful month...I felt like I was on an emotional roller coaster ride for the most part of it ;)

It started off with the agonising wait for the release of the psle (primary school leaving exam) results, followed immediately by another few days of decision making...choosing the secondary schools for my younger child. We then flew off for our year end holiday trip to Seoul and Jeju. We had a great time visiting or rather re-visiting the places in Seoul, not forgetting the great eating places and the fun self drive tour in Jeju. It snowed when we were in Seoul and it was a winder wonderland at the Hallasan national park in Jeju, the place was covered with thick snow!

I came down with a cold during the trip and developed skin rashes after we came home :( Despite the discomfort from the itchy rashes, sinus and coughing, I still had to carry on with washing and clearing the piles of laundry...the usual aftermath of a holiday trip. It took me more than a week to recover and I went on to work on the year end spring cleaning chores.

My roller coaster ride ended on a high note with the good news that my child has been offered a place in his dream school. It was really icing on the cake as we received the good news on the eve of his birthday. 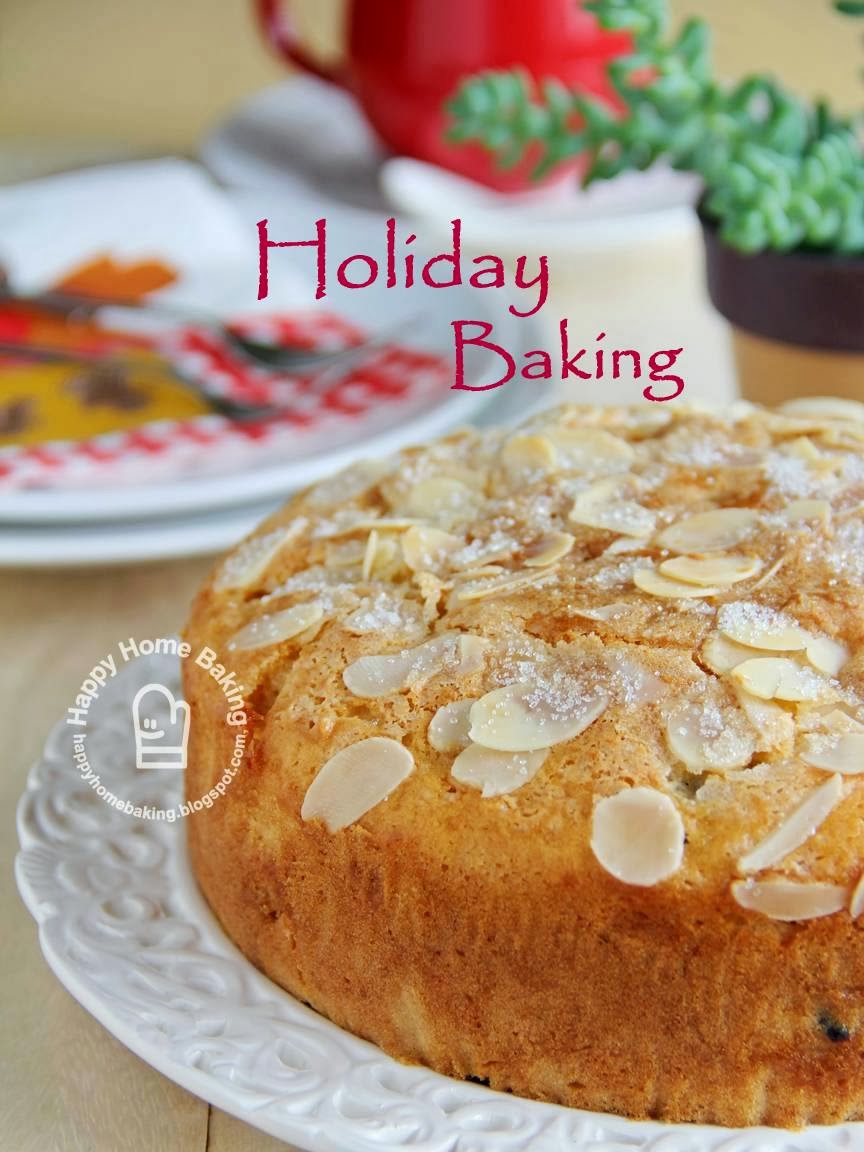 With so many things going on, it was hard to find time to do much baking. It was even more difficult to keep up with blogging. 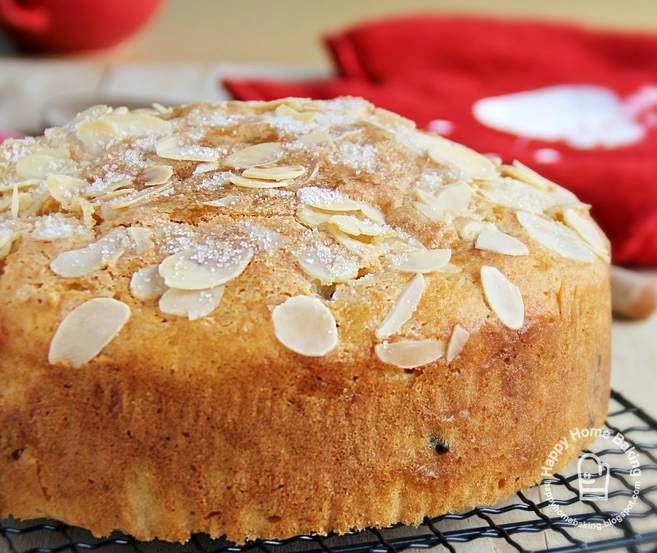 Just when I thought my absence would be gone unnoticed, I received a warm comment from a well wisher...an anonymous reader :) My heartfelt thanks to you for checking on me and my apologies for not updating my blog as regularly as I wanted. 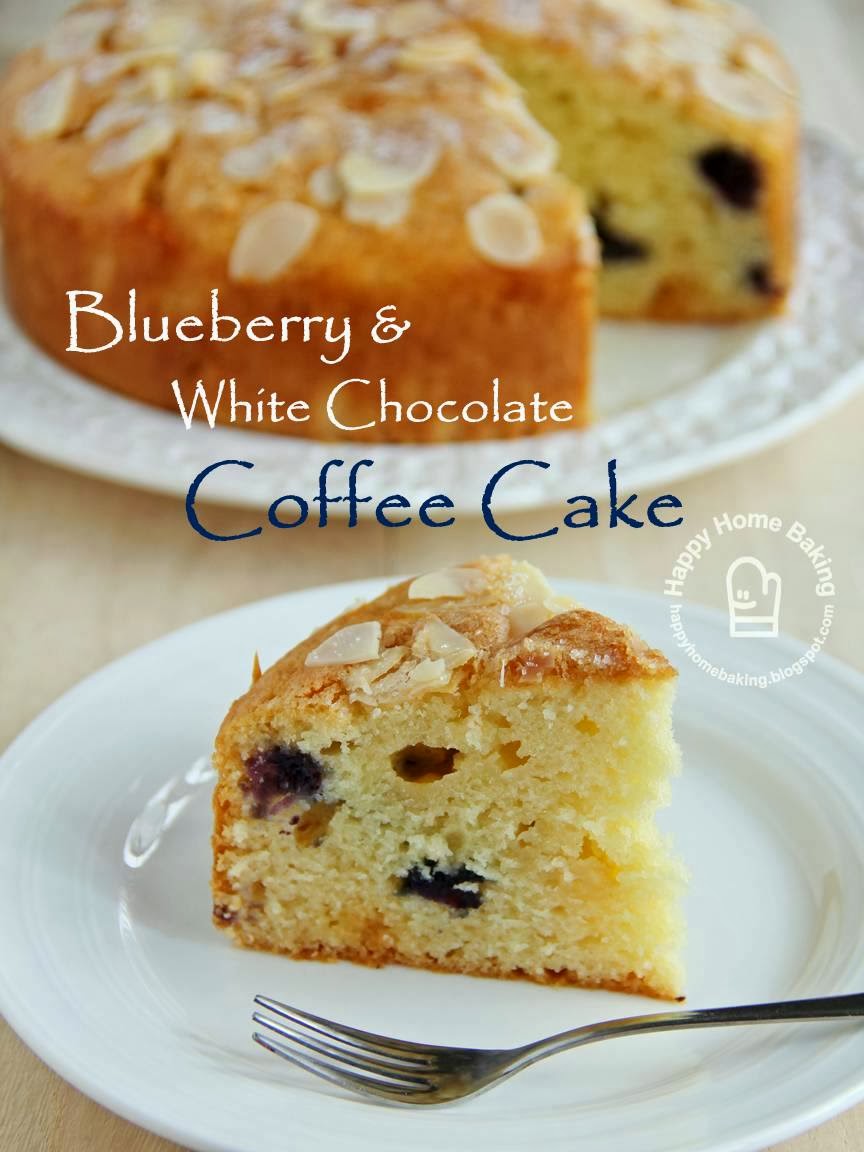 A couple of days ago, I finally managed to squeeze in some time to bake this delicious Blueberry and White Chocolate chips coffee cake. In case you are as ignorant as me, there's no coffee in this coffee cake. The term coffee cake refers to a moist, tender cake that is served alongside coffee or tea during breakfast or anytime of the day. One of the characteristics of most coffee cake is the inclusion of either yogurt, buttermilk, or sour cream in the batter. The cake is usually topped with some kind of streusel topping from a mixture of flour, sugar, and butter, or nuts, and sometimes various fruits may be added as well. 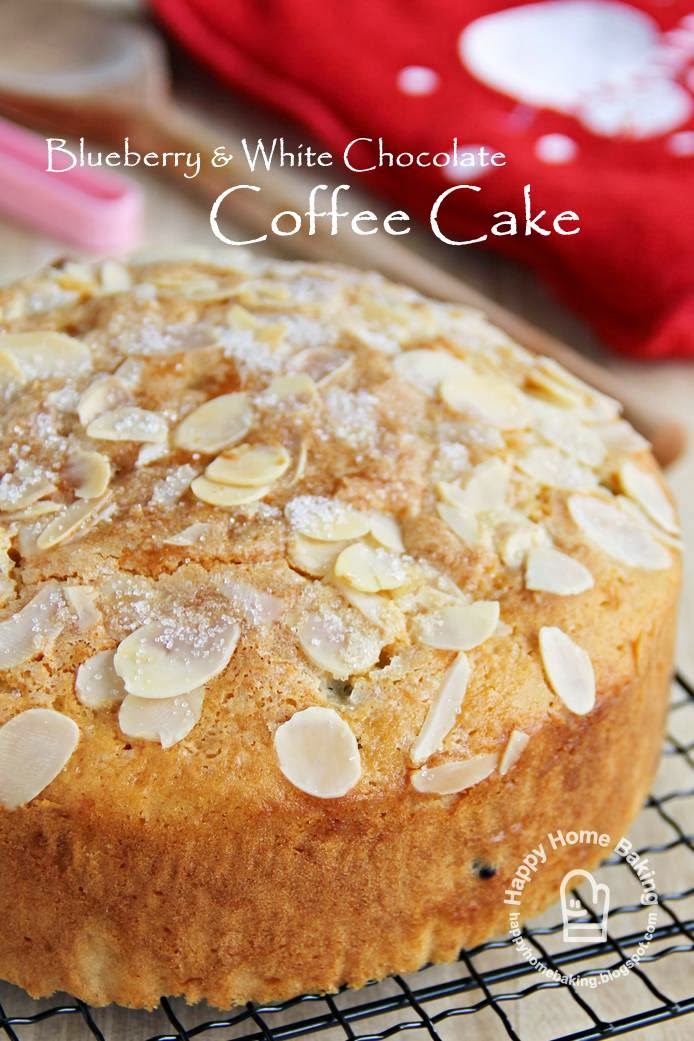 I followed the recipe from Baking Bites but adapted it to suit my baking pan, the ingredients I have on hand and reduced the sugar amount. The result was fabulous. I am not sure whether it was the 'drought' (the lack of homemade cakes for the past weeks), both my boys were all thumbs up after they took the first bite once I gave the go-ahead permission to cut up the cake. 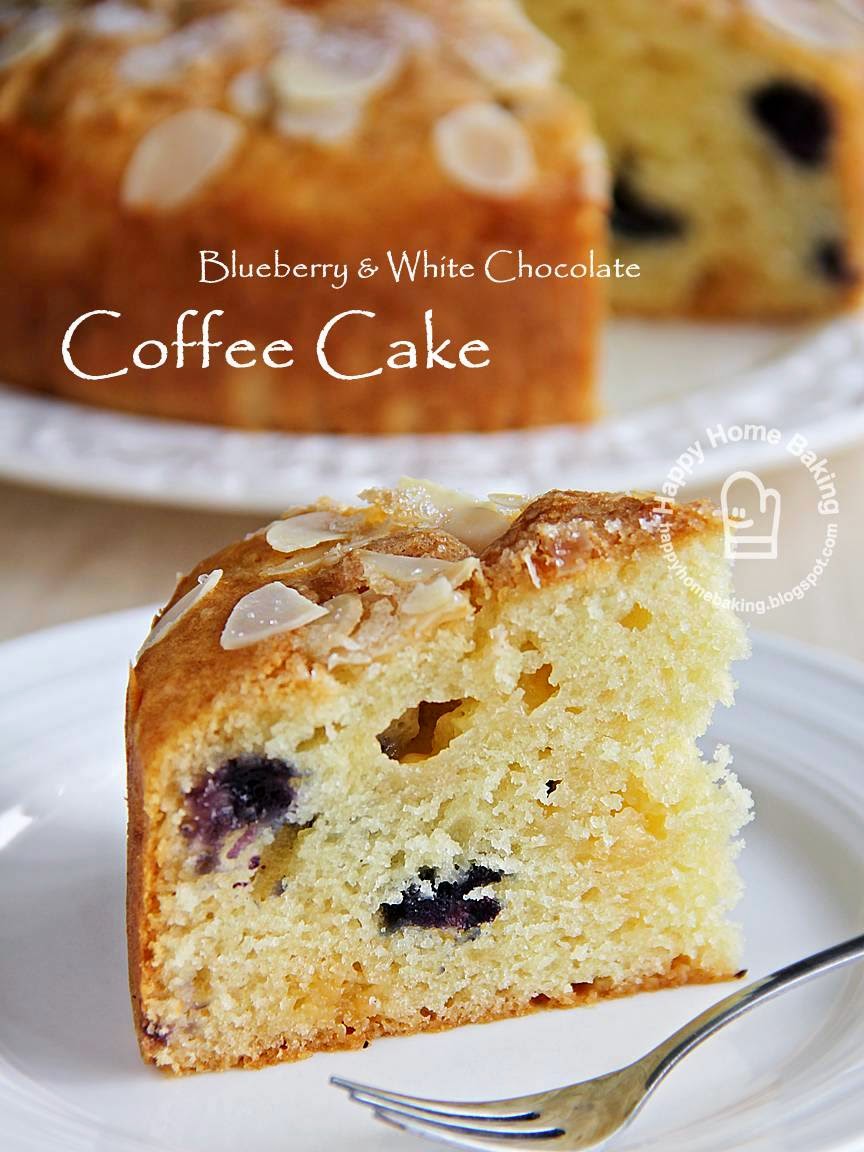 The cake was surprisingly moist, tender and even tasted so buttery although I have cut down on the sugar (by at least 80g) and it doesn't calls for much butter. I guess the yoghurt has made wonders again. The blueberries was on the tart side, but the sweet white chocolate chips paired it off really well. You can't go wrong with sliced almonds as toppings, it lends so much fragrance and flavour to this simple and easy to put together cake.

If you have the ingredients on hand, why not whip this up for your breakfast, tea or after dinner dessert? It will be a nice centre piece if you have guests coming over, and certainly great to bring for potlucks or gatherings during this festive seasons. I am quite certain it will be a crowd pleaser :)