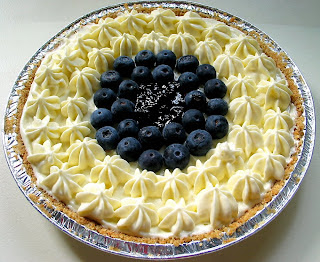 When I saw a picture of this very delicious looking blueberry tart from a Chinese cookbook (甜心小妙厨), I thought I should give it a try. I like the way the tart is decorated, and it will be a good chance for me to practice my piping skill. The recipe looks simple, as it is quite similar to the no-bake oreo cheesecake I have done before. I have came across a low-fat cheesecake recipe, where cream cheese is mixed with yogurt. Hence, instead of the fresh cream called for in the recipe, I replaced it with non-fat plain yogurt. I was glad with what I did as the taste is really awesome, and it is a much healthier version. 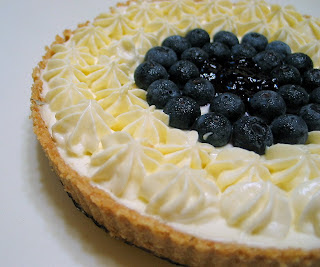 The recipe in the cookbook didn't give any instructions on how to decorate the tart. I tried to follow by studying the picture. It turned out that my "stars" were too big, as such, after lining the blueberries in 2 circles, there was little room for the blueberry jam! I should have used a smaller piping tip. The tart was really out of proportion, as the "stars" were bigger than the blueberries :(

The cream cheese mixture was a little soft to handle when I tried to do the piping. In the end, some stars were big, some were small. It didn't help when my younger boy came over to have a hand in squeezing the piping bag. He found it rather interesting. We had fun placing the blueberries as we tried to look for those which were of the same size...he happily finished up the remaining "unwanted" blueberries.

My elder boy couldn't wait to eat the tart when he saw the finished product in the fridge. He missed out the fun as he was busy catching up with his holiday homework...poor fellow! He finally got this slice after dinner. He likes it very much and the slice was gone within seconds! 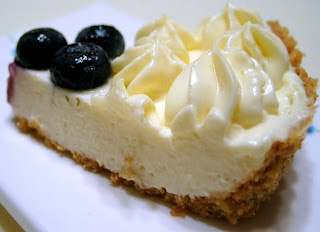 for the base:
125g digestive biscuits, crushed into fine crumbs
60g butter, melted

I love cheese! Fantastic! Was it your first attempt? If yes, you have done a great job. Blueberries and cheese.. yum. Your sons are so blessed. I wish I can have a nice SH!

Wow! This looks really great! Congrats for creating such a beautiful and healthy tart ; )

Hi lavender cupcaker, yes it was my 1st attempt...to make a tart and to frost with cream cheese. The decoration is not that good, as compared to the original photo in the cookbook. Do give it a try as it is quite simple to make.

Hi Sandy, I think this can be considered "low fat" dessert...but I ate 3 slices in a go, so won't do much help to my waistline, hehe ;)

May i ask which brand of non-fat plain yogurt shld i buy & where so that it won't give a sourish taste after bake (oso suitable for non-bake cheescake).

Hi ChezzyHeart, hmmm, I am not too sure about the sourish taste, and I am afraid I won't be able to comment much on this, as taste is quite subjective, and different people has got different preference? But I usually use Marigold's non-fat yoghurt, and you can get them from supermarket. Hope this helps :)

One more qns =pp Sori if i ever ask before ('blush')

For the double boil method. Can the bowl touches the simmering water when placed in the pot? thks again =)

Hi Chezzyheart, yes, you have asked about this under the post "no-Bake Oreo Cheesecake".
In case you didnt refer to that post, I'll repeat the reply here. For dissolving gelatine, is is alright for the bowl to touch the simmering water. Hope this helps!

Hi, can i know how can us take out the tart from the pan nicely? did u line the pan?

Hi Elmo, no I didn't line the pan. For this tart, I used a disposable pan...the sides are quite soft, so I simply bent the sides/rim and trim it away to remove the tart.

Are the measurements US or AUS cup sizes?

I tried the recipe. Easy, yummy and not too sinful caloric wise (my wishful thinking :P). Thanks for sharing.

Love your blog. All the cakes are so beautifully decorated and look delicious. Keep it up!