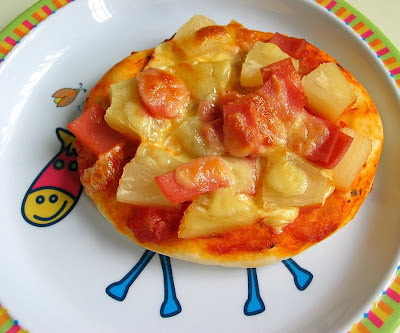 For the past few days, I have been hosting sleep-overs one after another for my niece and nephew. It happened that all 4 kids were at home yesterday...and we decided to have a made-your-own Hawaiian pizza lunch.

All 4 of them love Hawaiian pizza...they only wanted ham and lots of pineapples, and nothing else on their pizzas. After comparing a few pizza dough recipe, I decided to go back to the same recipe that I tried earlier, as it seems like the recipes don't vary too far from one another. Furthermore, I knew that the recipe will yield a thicker, pan pizza crust which the kids prefer. Although I would prefer a thin crust. Only my younger boy helped me with the kneading of the dough...the rest were too engrossed with whatever games they were engaged in! 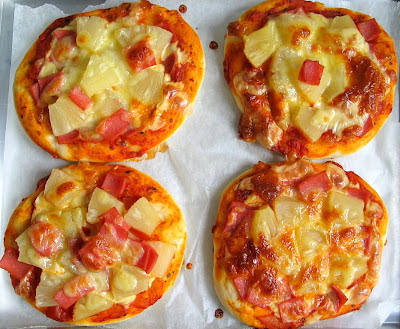 I was a little stressed when all 4 crowded around the kitchen to wait for the dough to be punched down and shaped into small dics. Then it was followed by a few minutes of chaos when 40 fingers were scrambling all over for the toppings. Each of them came up with their own way to 'mark' their personalised pizza. 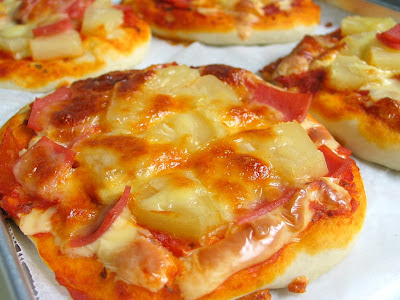 This was my niece's personal pan pizza...she was clever to top hers with lots of cheese :) 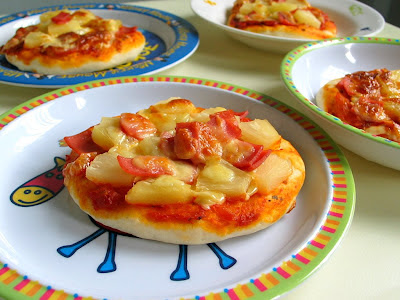 and the rest...served in assorted kiddy plates.

Naturally they enjoyed their own food, and there was not a single word of complaints. I guess, even if they didn't like it, they wouldn't make a noise since they made these themselves ;) From the look of of their faces, and the way they ate their food in such hearty manners, they must have thoroughly enjoyed the meal together! 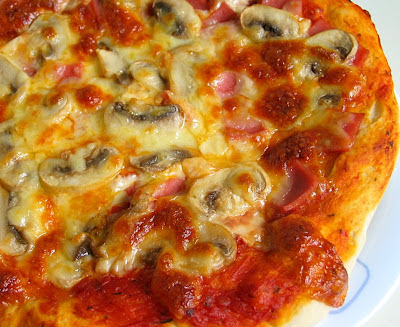 I sauteed some fresh button mushrooms with butter, added some soya sauce and pepper to taste....and with some leftover hams, I made my own mushroom pizza :D 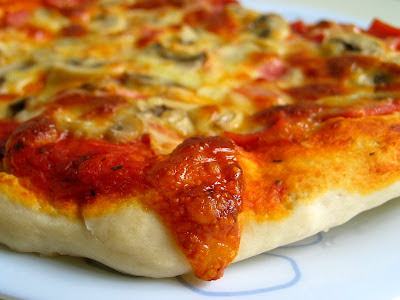 I took note not to make the same mistake as my previous attempt, and grated the mozzarella cheese coarsely this time. I tried rolling the dough as thinly as possible, hoping to achieve a thinner crust, but the edges were still quite thick and puffy. 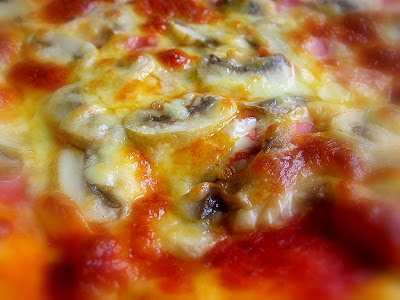 With the melted cheese layer on top, the pizza looked so much more appetising as compared to my 1st homemade one. 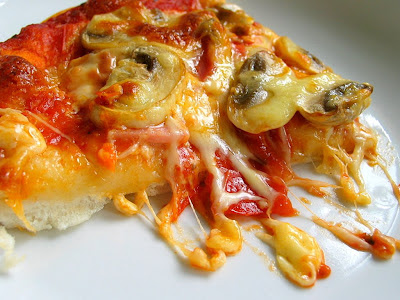 Even though I didn't use that much of cheese, it will be too fattening if I were to follow the amount stated in most pizza recipes, to my delight, I was able to achieve a small amount of the 'cheese pull' effect. Although this was really nothing compared to those pizzas that you get from pizza outlets!

This pizza was so delicious that I ate 3/4 of it all on my own...without a single feeling of guilt ;p

Hi Happy Homebaker!
the pizzas look fantastic!
especially the one with mushrooms!
*drools
i'm sure the kids had fun making their own pizzas, makes me feel like making my own too :D
haha

Wah, my whole family likes hawaiian pizza too. You are right when kids bake/cook their own food, they complain less and willingly eat it haha. I have to try to bake myself someday..:-P

Hi! I like your pizza. Will try it out next weekend. This week I've been baking quiche. It taste really good. If you're free, have a look at my quiche here http://www.singaporemotherhood.com/forumboard/messages/353638/437150.html?1197105109

Hi Sweet-tooth, the kids didnt really make their pizzas...they just added the toppings! next time I will get them to knead the dough!

InspiredMumof2, the great thing about making your own pizza is, it's a meal on it's onwn...I had fun playing with the dough, and settled one meal at the same time!

Hi Pat, it sure is! I discovered this far too late ;)

Serena, I saw your quiche! lovely! and it's so simple! I will love to give it a try! May I ask where did you get fresh basils? I don't seems to be able to get fresh herbs easily, not even in NTUC or Cold storage outlets.

Thanks for the compliment. This is the first time someone says she wants to try my recipe. Ha!! Anyway, fresh basil can be bought from NTUC too. But you need to go to big NTUC. For example, the one in Bukit Timah Plaza. Try to find one near your place.

Hi Serena, thanks for the info!

No matter how you slice it, there is just nothing wrong with homemade pizza. :0)

If I'm not making pizza from scratch, my husband is whipping up some quick and easy pizza rolls. :0)

Thanks for sharing your beautiful pictures of those tasty pizzas.

Hi HHB! Just want to let you know that Mustafa Centre sells herbs too! I was there today and alot of baking ingredients!! A must shop place for bakers!!

Hi Serena, thanks for the info! I have been to the baking section at Mustafa...but not the fresh veg/fruits area. Will take a closer look the next time I happen to be there. Thanks so much!

thanks for sharing this... damn tasty!!