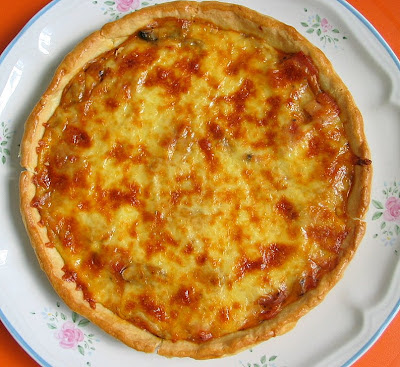 No, this is not a Quiche Lorraine, but a Mushroom Pie. Made this pie for lunch yesterday, using a recipe from a Chinese cookbook. It was a breeze making the pie crust as the pastry was not overly soft or sticky. The only problem I had was the fillings! I didn't follow the recipe to use dairy whipping cream and milk to make the sauce as I ran out of cream. So I thought I could replace it with a ready-made pasta cream sauce which I bought recently. 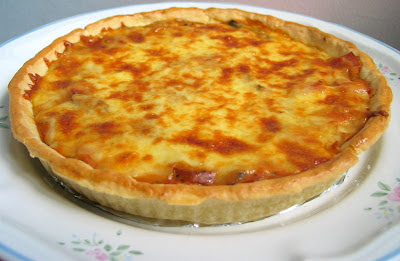 To our great disappoint, the sauce didn't taste very good! Not only there was too much sodium, the taste was a bit off! 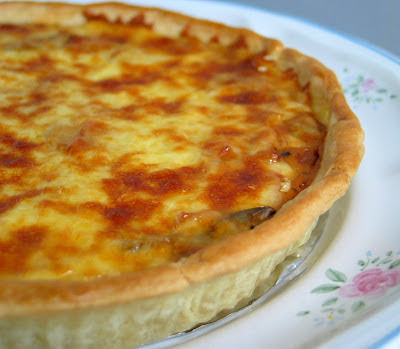 Thanks to my "temperamental" oven, the sides of the pie crust was not very browned, it was still quite pale when I unmold the pie. As a result it was not very crisp. 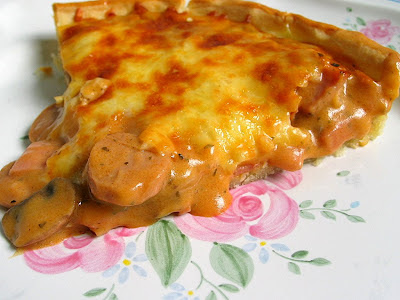 Here's a photo of the innards. Not very appetizing...as the sauce was not white but light brown...it was a "grilled chicken sausage" flavour. I added fresh button mushrooms and some picnic ham to the sauce. I am lucky to be blessed with 2 boys and a cute niece who are not fussy eaters. The four of us gobbled down the entire 8" pie in no time!

For those who are interested to try this out, I have posted the recipe here. I am sure if I were to make the fillings from scratch, this pie will really taste much better!

Your pie looks yummy! I don't quite understand about adding the beans part. I bake your chicken pie the other day and the potato inside was uncooked!! Sigh! I also tried baking croissant and it was so hard!! Another failure!

thanks for your helpful comment. may i know if emborg uht whipping cream is the non-dairy whipping cream you used for the mango and peach charlotte? if not what brand did you use? i want to try that recipe.. thanks again cos i'm a novice

I disagree - I think this looks delicious, the oozing sauce is mouthwatering!

Hi Serena, the beans are used to weight down the pie crust while baking it before the fillings are added. This will help prevent the crust from puffing up.
So sorry to hear about your pie. Did you follow Bakingmum's recipe? You will have to cook the filling ie the chicken, potato before filling it in the pie and bake. You can't add raw, uncooked fillings in the pie...the heat will not be able to cook thru before the crust turns golden brown. Do try it again, it's a very good recipe!
Oh yes, I have been wanting to try croissant too! but I have yet to pick up the courage to do so!!! You are very brave :) and what went wrong?

Hi Kat, if I am not wrong, emborg is dairy cream. I have not tried it though. For non-dairy cream you can try this brand "Pour & Whip" available at cold storage, there is another brand 'Aveoset' too. I got my non-dairy cream from Phoon Huat, it's under their house brand "Redman" comes in a 1 ltr pack. Hope this helps.

Hi Pat, you are very kind :) The sauce really spoilt the pie, but it was still edible ;)

Sweet-tooth, this is the first time I have eaten mushroom pies! I am not a pie or tart person. But lately, I am getting very interested in pies, as I can make them for lunch :)

My name is Shannon and I'm the editorial assistant at Foodbuzz.com. I am very impressed with the quality of your posts and to that end, I’d like to invite you to be a part of our newly launched Foodbuzz Featured Publisher program. I would love to send you more details about the program, so if you are interested, please email me at Shannon@foodbuzz.com.

P.S. Your pie looks delish, as does your biscotti! Mmmmm...

What is cheese powder? Can I use grated parmesan instead?

Ji Ka..t, yes, do try bakingmum's chicken pie, it's very nice!
I use the same term as the cookbook, direct translation :) I use Kraft's grated Parmesan cheese in powder form (in a bottle), but not the freshly grated ones. Can you get them over at your place? Hope this helps :)

i'd love to try to make this: what mushrooms are best for this recipe? also, how do we cook the mushrooms - just sautee them in a bit of oil in a saucepan, or...? what is cheese powder? is it okay to substitute it with grated cheese instead? i'm not too clear on what that is... lastly, is dairy whipping cream the same as thickened/heavy/double cream? should the cream and the milk be left to come to room temp before use or does it not matter? i wonder if ice water can be replaced with cold, refrigerated water?

Thanks for the recipe :)

Your mushroom pie looks so yummy! It makes me so wanna make one too :)

I think I'll dig myself making this for our snack this sunday ;)

Hi Jo, I used fresh buttons mushrooms (what I had in the fridge!). The recipe uses fresh assorted mushrooms, like button, oysters mushrooms, shiitake etc. You can use whichever based on your preference :) You will just need to sautee them in a bit of butter or oil till they term soft, add pepper & salt to taste.
As for the cheese powder I used Kraft's grated Parmesan cheese (dried powder form). I think this term is rather confusing, I will change it! Ice water refers to cold water (without the ice), and yes, it's just cold refrigerated water ;P
Dairy whipping cream is the same as thickened/heavy/double cream, as long as it is Dairy. You need not leave the cream/milk sauce to room temperature. Hope this helps :)

I love mushroom! I must buy some this weekend to make a mushroom pie!

This dish is so yummy, I have made it twice already....
Sharon

Hi! It's been a long time seen i post a comment on ur blog ..lol...this pie look delicious...especially after seeing the photo ...it looks so creamy!! but i have some questions AGAIN..lol

What do you mean by
" Line the pie crust with a piece of foil or parchment paper, and fill it with dried beans, uncooked rice or metal pie weights. "

Do you mean put some uncooked rice , etc ON THE TOP of the pie?

Hi Tasmin, this is to pre-bake the pastry before filling it, and then bake again after the filling is added. This will help to make sure the crust is cooked and stay crisp.
You place a piece of parchment paper which is big enough to cover the whole pie, then put the pie weights or beans or uncooked rice on the parchment paper, and place the pie into the oven to bake. You can google with keywords "How to Blind Bake" and there should be photos to illustrate the steps. Hope this help :)

Hi i tried making this tart today and i did not using cheese powder.I used Romano Cheese and the tart turn out really nice! But the sauce was white not brown and i cover it with Romano cheese as well . Did not use mozeralla

Hello!thanks for sharing this recipe! I tried it and it tasted great! just that the crust wasnt very well done. My second time will be better i hope! Thank you!! =D

I love anything with mushroom. However, I found out sometime my dishes or the mushroom itself taste bitter. Do you know what happens? Is there any specific way to clean or cook mushroom? Even my mushroom soup taste bitter :(

Thanks for posting recipes. Yesterday I made the Jellyhearts Cheesecake. Beautiful but the cheesecake taste too heavy for me. As for my daughter, she is only interested in jelly (as I predicted).

Hi, I am not sure what went wrong, so far I have not encountered this problem. Maybe you have over cooked the mushrooms? As for the cheesecake, I used Philadelphia cream cheese, it is quite light. Which brand did you use?