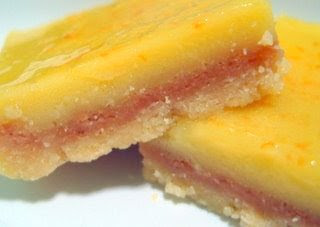 Both my boys like lemons. Whenever they have fish & chips, they would reserve the wedge of lemon till the end of the meal. They like to lick and suck on the lemon! So when I came across the lemon bars recipe by Alice Medrich, I thought I would try it someday. A few days ago I bought some lemons specially to make the lemon bars. While I was gathering the ingredients, a thought suddenly came into my mind. Why don't I substitute lemons with oranges? Personally, I prefer oranges. I didn't foresee any problem since the only change was to replace the juice and zest of lemons with that of the oranges and cut down on the sugar. With that in mind, I set off making the orange bars.

Since this is my first attempt, I have no prior knowledge how the base or topping would turn out. While making the base, I was a little hesitant to add in the flour all at once. So I just added a little at a time. Small little lumps began to form. I got worried and thought maybe I should just throw all the flour in as the recipe didn't state that the flour should be added in gradually. Fortunately, once all the flour was added, with only a few stirs, a soft dough was formed. When the crust is baking in the oven, I prepared the topping. I wasn't sure whether I could let the topping "sit" and wait for the crust to be ready. So I waited until the crust was already in the oven for 15 minutes before preparing the topping. When the topping was done, I became worried whether the topping would set. With 3 eggs, half cup of orange juice and only 3 tablespoon of flour, the mixture was very thin. Luckily the topping was able to set within 30 minutes in the oven.

I was a little disappointed with my little experiment. They were not as thick and certainly looked far from those made by Evan. Even though I have cup down the sugar by half, the topping still tasted too sweet for my liking. My boys were all thumbs up though, kids simply like sweet stuff! I like the crust though, very buttery and crispy. As I have not tasted any lemon bars before, I have no idea how these orange bars would compare to the real McCoy? I will definitely try out making the actual lemon bars very soon.

This sounds really tasty. I'm going to try this for the weekend. Thanks!