This is the subtitle of a cookbook, which means, 'How could that be possible?! It still tastes as good without adding butter or oil?!' 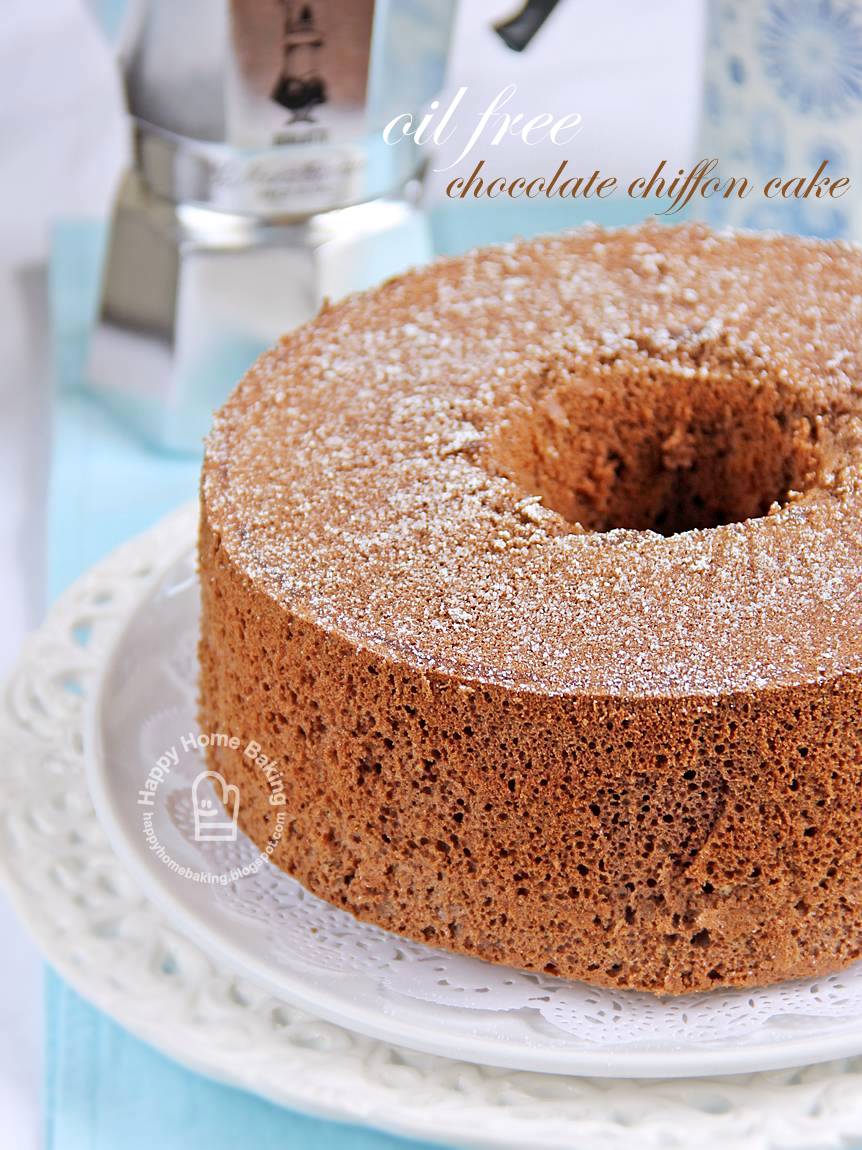 When my baking friend showed me her oil free chocolate banana muffins made following a recipe from this cookbook, 好吃不发胖低卡甜点 (loosely translated as: delicious low-calories desserts), I got really interested. 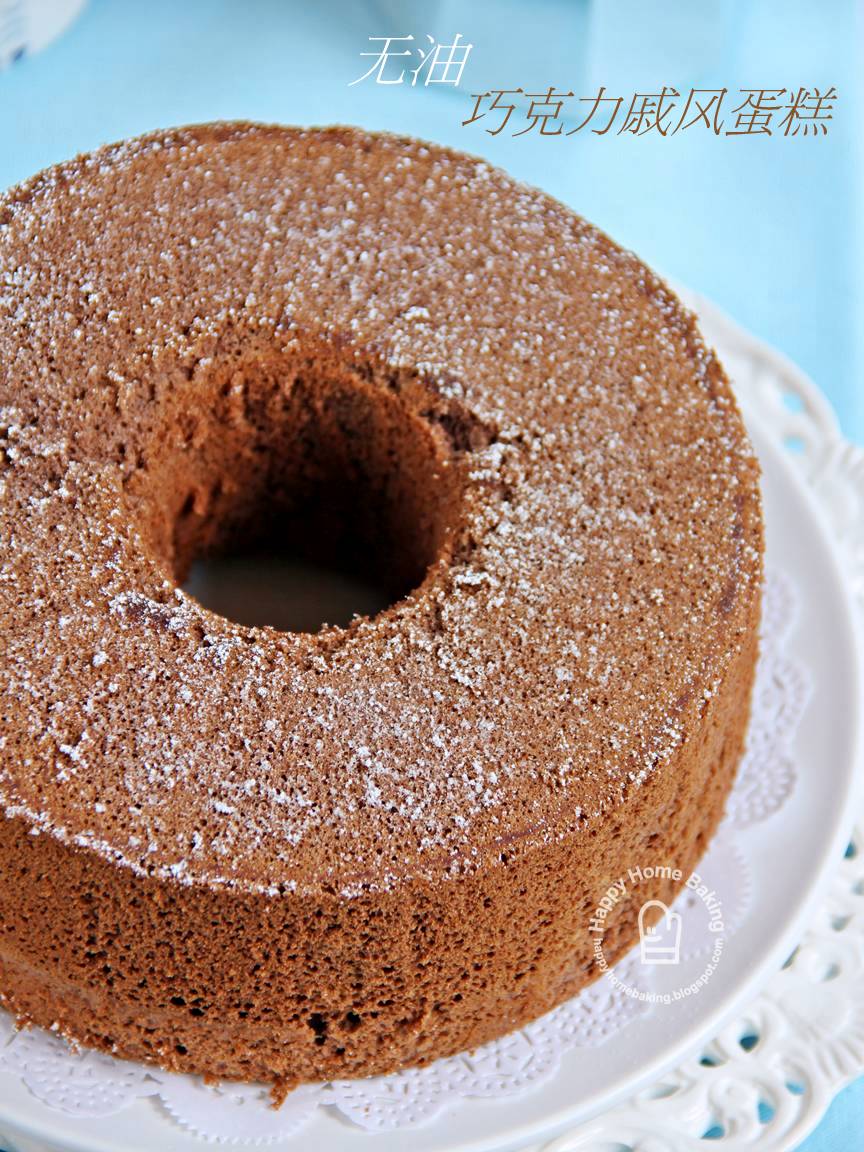 I bookmarked a few recipes and one of the first few I tried is this Chocolate Chiffon cake. The ingredients list is typical of a basic chiffon cake recipe, the only difference is, there is no oil in the list. There are no other special ingredients other than the usual eggs, sugar, flour and liquid. Whenever I make a chiffon cake, I would usually prepare the egg yolk batter first using a manual balloon whisk before beating the egg whites with an electric handheld mixer. The instructions for this recipe however differ from my usual method as is it necessary to use the electric mixer to beat the egg yolks. Without having to wash the whisks/beaters of the mixer, the egg whites are first beaten before preparing the yolk batter. Hence, it is important to get ready the necessary ingredients so that the yolk batter can be prepared quickly, otherwise, the beaten egg whites may probably deflate if left aside for too long.

Other than the sequence, the rest is quite straight forward. Yet, I made a hiccup while preparing the egg whites. I over beat the whites, just slightly, but it still affected the finished product! What a major no no, and really unforgivable for someone who bakes chiffon cakes so regularly. I learned not to take things too easy or for granted, even if I am very familiar with the process. 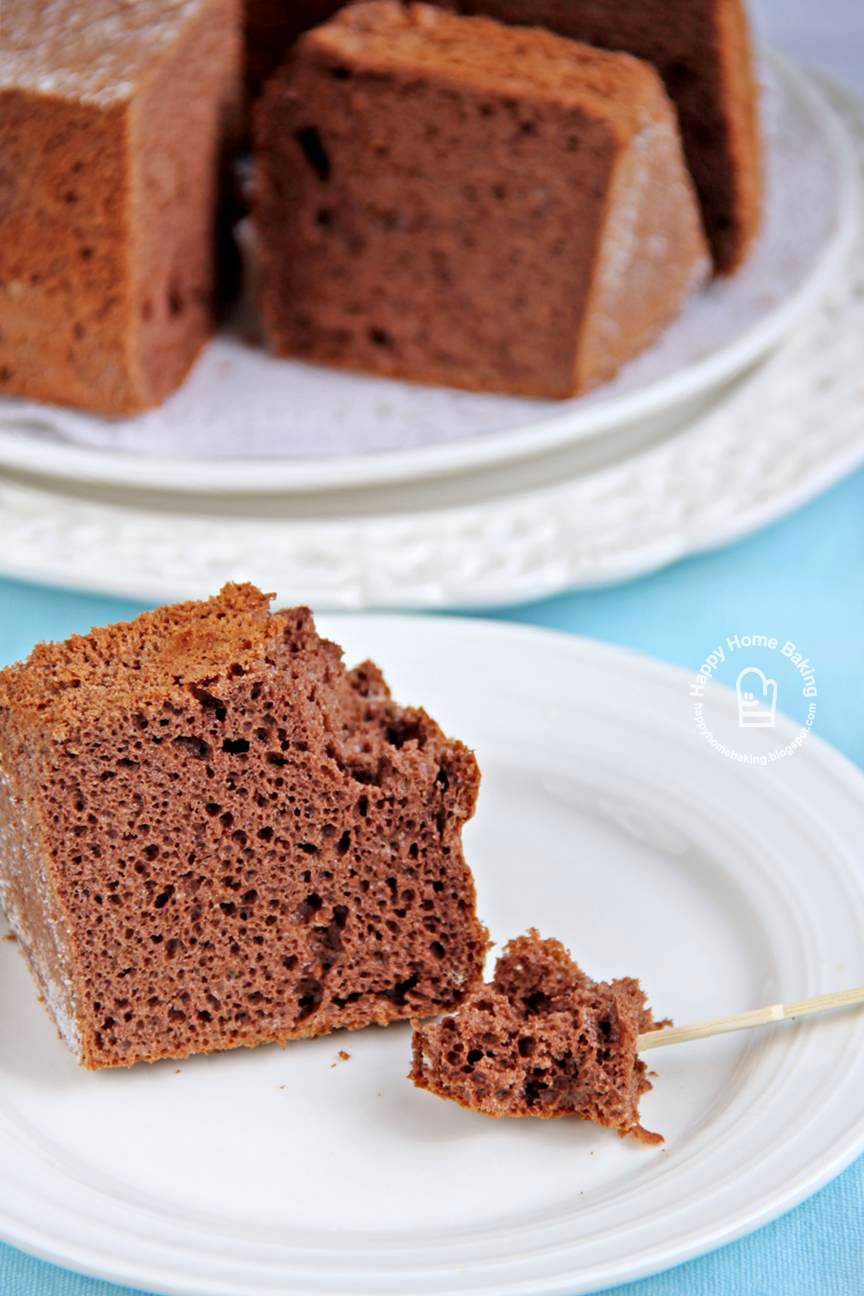 Since I over beat the egg whites, I deflated the batter while folding the whites to the yolk batter. The finished batter was still thick but it could only fill up the pan to just 3/4 full. The cake didn't turn out as tall but fortunately, the texture was not really affected. Even without the use of any oil, the cake was still moist, soft and fluffy. If someone were to give me this cake to try, I would never be able to detect that it was made without oil. The only tell tale sign is that there wasn't any oil stain on the doily paper which I used to line the cake. Another thing I noticed is, the cake was a little more difficult to unmold, or is it just me? 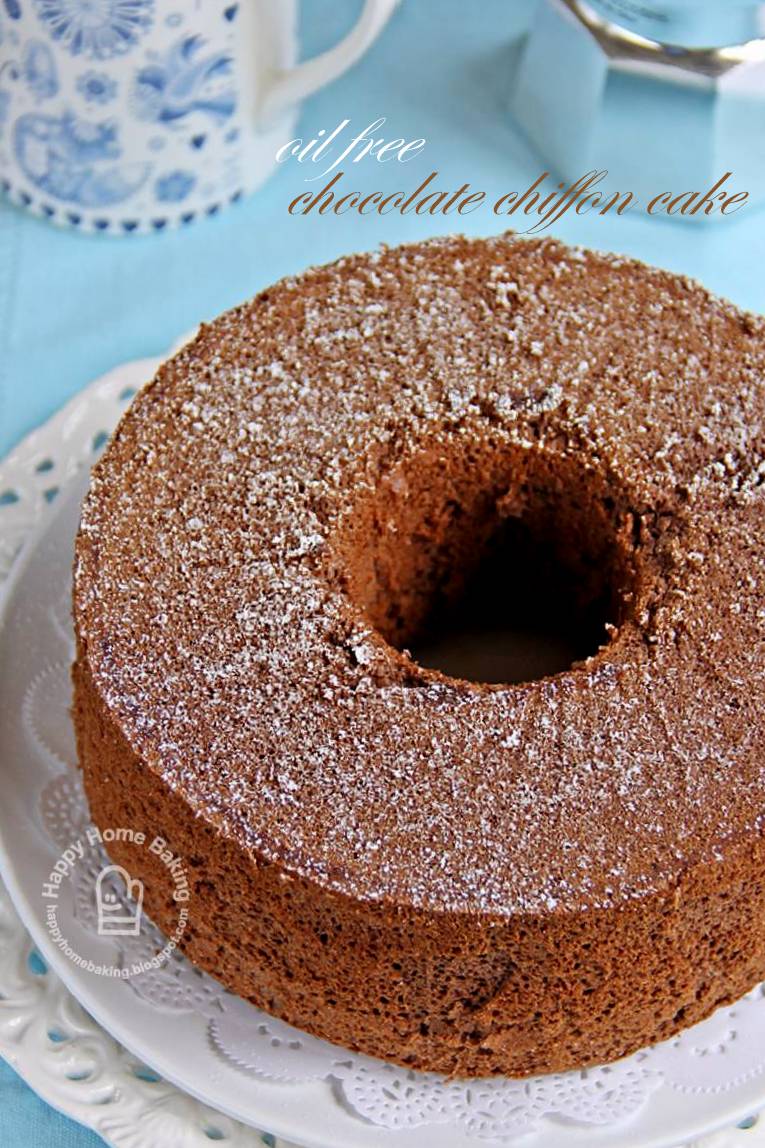 The book states that 1/8 of this 17cm cake has got 113 kcal compared to 180 kcal for a similar chocolate chiffon made with oil, lower calories without compromising on the taste and texture. I used valrhona cocoa powder which lends the cake a richer and intense cocoa flavour. The cocoa powder also gives the cake a deep mahogany color. The pictures I took show a lighter shade as I had to adjust the brightness and contrast as the original images were too dark. I also took the liberty to add in some rum besides the pure vanilla extract. This recipe is a keeper and it will be my go-to chocolate chiffon cake from now on.

Hi HHB, it's possible to bake very good oil less chocolate chiffon. I have came across a recipe for this cake with oil and went ahead to bake it. It turned out very well and nice. Nobody knows it is a fat free cake. I don't know if it is the same recipe but I have bookmarked this to try. Thanks for sharing.

Hi Kimmy, nice to hear that you have great experience with no oil chiffon cake too :) Isn't it amazing? baking is indeed science ;)

Thank you for the oiless choco chiffon recipe.

I always beat the white first before I beat the yolk part in preparing chiffon and I did not rush for fear that the 'set aside' white will deflate. From my experience, the white will not deflate so quickly, esp. when it has a pinch of cream of tartar in it.

Very interesting I shall try this recipe. I know there is flourless cake... No oil or butter chiffon?..😑, your cakes's texture look fine crumb..I got to try it once to find out for myself. Thanks for sharing. Sure will cut down on lots of calories for my office workers😀

Hi Priscilla, thanks for sharing! Glad to hear that the egg whites won't deflate easily :)

What a great recipe! I'll have to put it on my to do list too :)

awesome..!! thanks for sharing

Hey that looks good! Last time I baked Chiffon Cake was several weeks ago and I use a lot of oil that time. Guess I need to bake some more, with your recipe. It looks very spongy!!! Thank you for sharing, HHB! :)

Hi Sharon, hope to hear from you after you have tried it :)

Hi HHB, will love to try this recipe. I don't enjoy the "oily" feeling after eating chiffon cakes too - so this is good news for me :D Thanks for sharing.

HI..can you please advise what milk do you used? Thanks!

Wow~ Making chiffon cake w/o oil!!! Yeah!! I also want to try because my boy is a huge chiffon cake fan. Thanks for sharing this wonderful recipe friend :)

Hi Ellena, hope you can give it a try!

Hi Mary, the batter would be too little for your pan. To avoid any disappointment, do follow recipes that suit your pan as chiffon cakes are more delicate bakes.