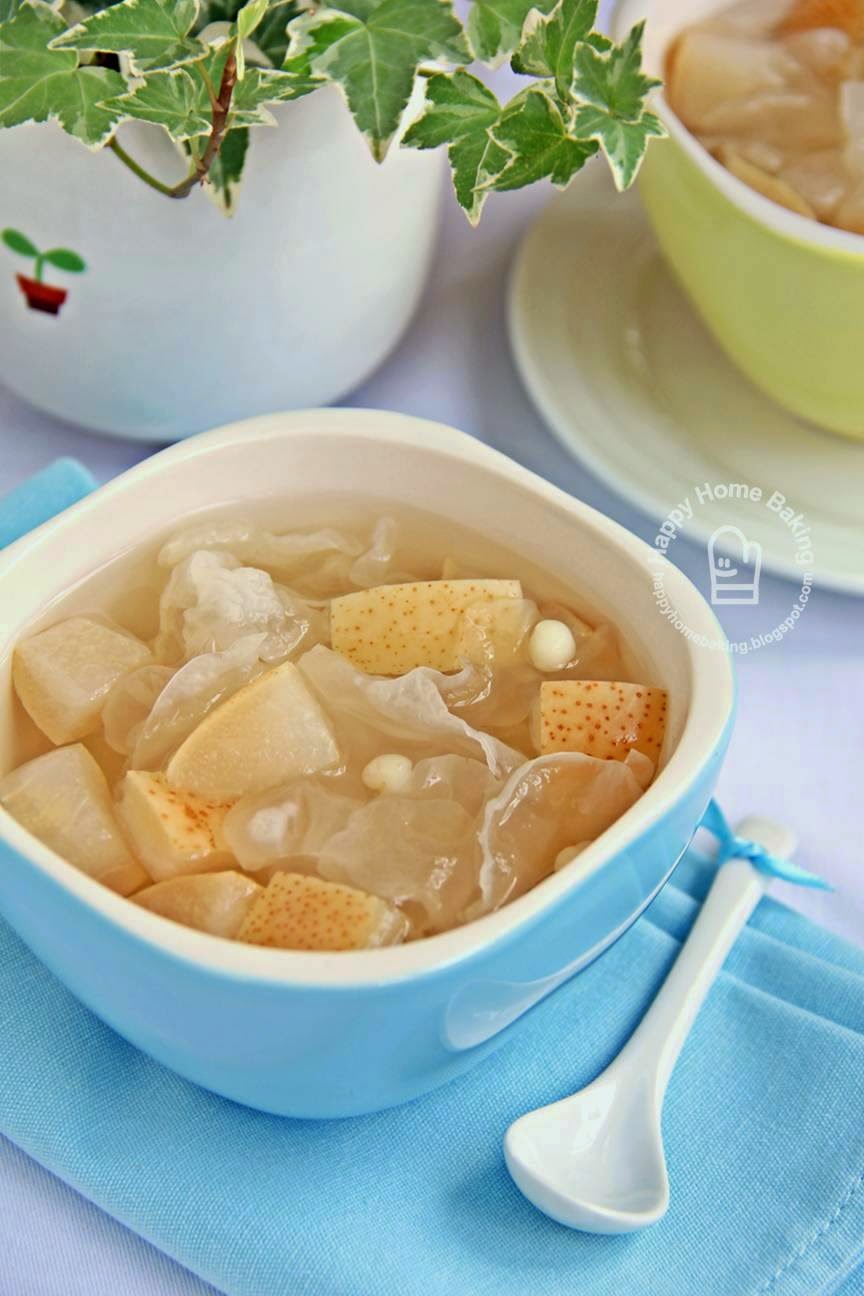 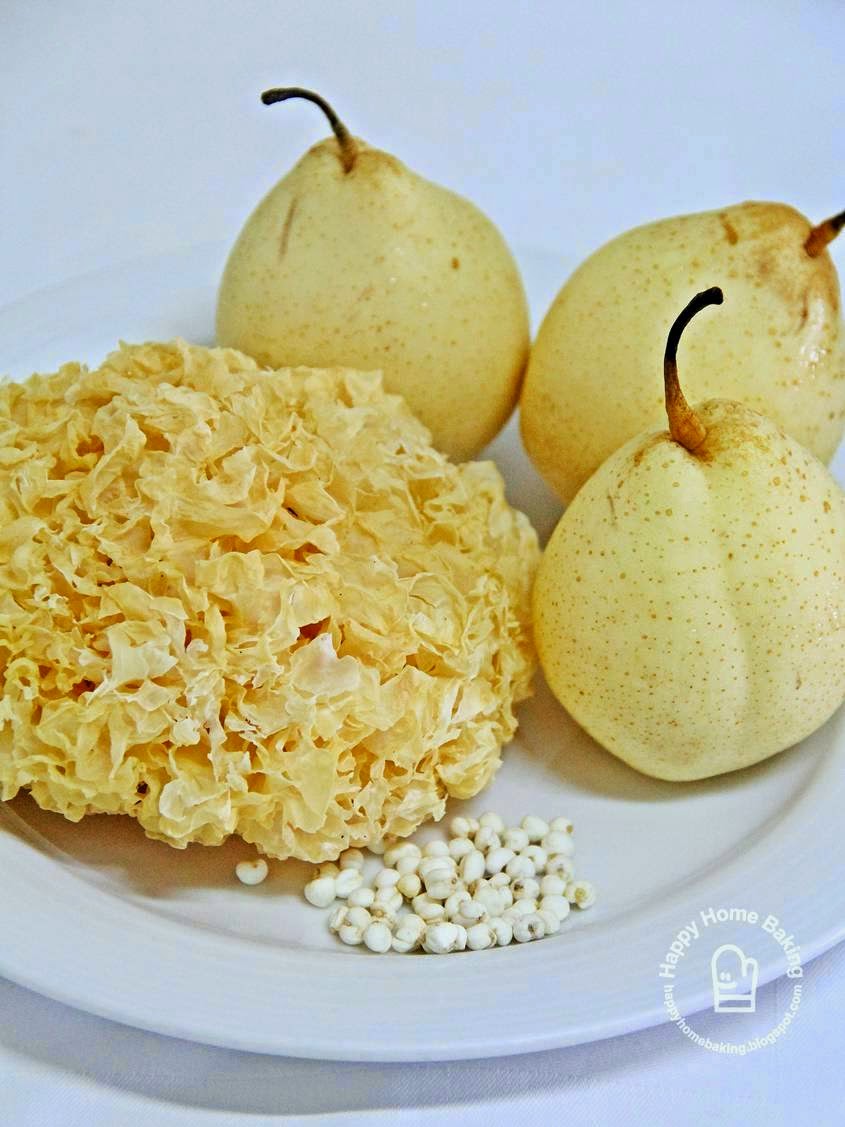 The basic ingredients include asian pears (I used ya pears 鸭梨 as they are readily available), chuan bei (fritillaria bulbs), dried snow fungus and rock sugar. 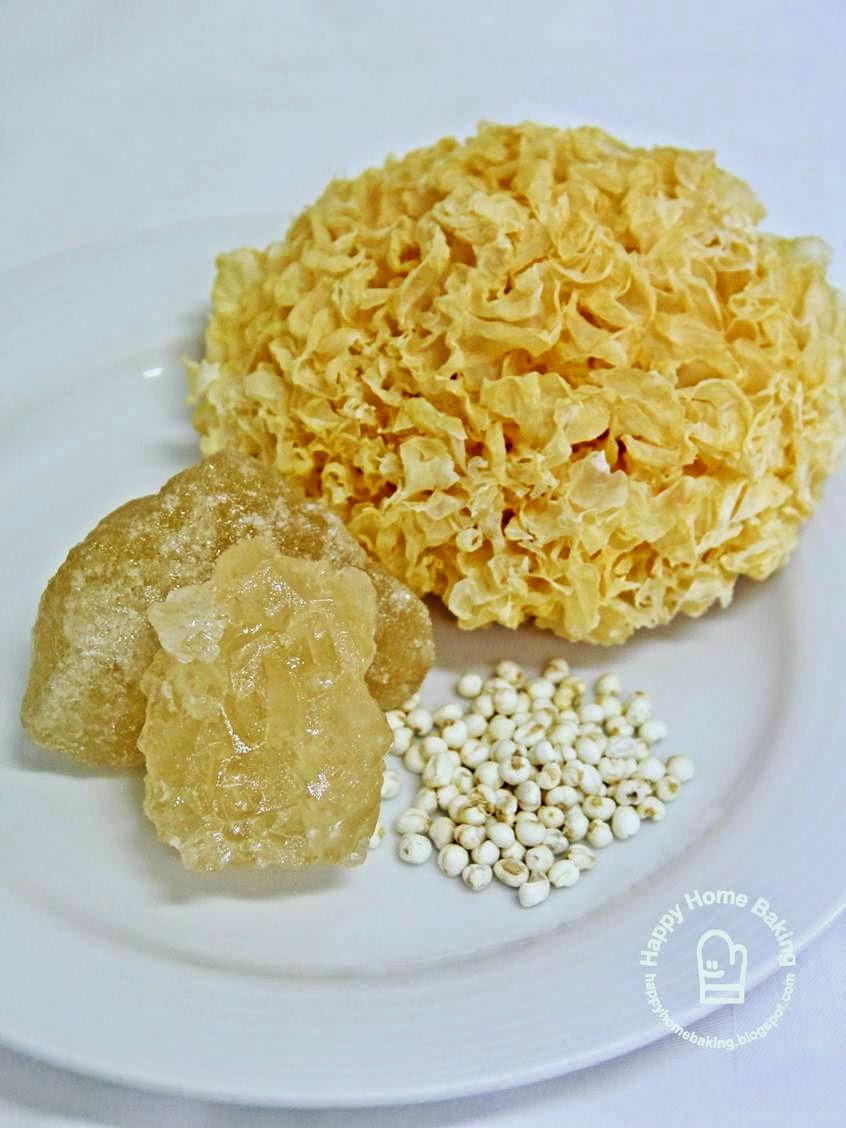 These ingredients has medicinal benefits to help remove heat from body, clear phlegm, relieve cough, bring moisture to the lungs, soothes and nourishes the respiratory tract. 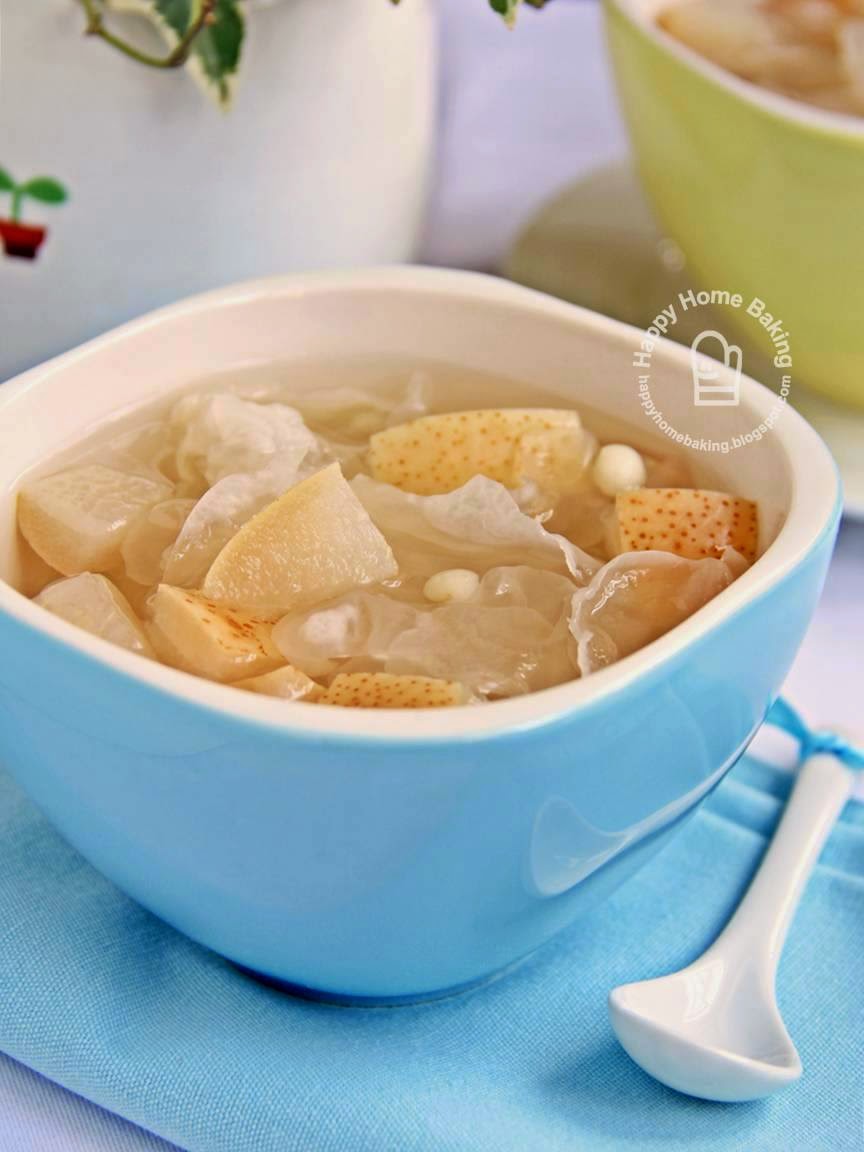 This nourishing dessert is very quick and easy to prepare, simply by simmering the ingredients for about 30 minutes. Due to the short cooking time, the snow fungus will be slightly crunchy and not overly soft or gelatinous in texture. The soup will remain clear and not 'cloudy'. Although I prefer to cook snow fungus in savoury soups till it turns very soft, silky and gelatinous, for this sweet dessert, I like it that the soup is clear, making it very refreshing especially when served chilled. The shorter cooking time also means that the pears still has a slight crunch and not soft and mushy.

Do note that this dessert is good for treating cough (热咳) developed from heaty cold (风热感冒). However, it is not meant to treat cold cough due to 风寒感冒 as chuan bei is very cooling to the body.

If the chuan bei is omitted, it is still a nice and refreshing dessert to help remove heat and quench thirst especially during such hot weather. 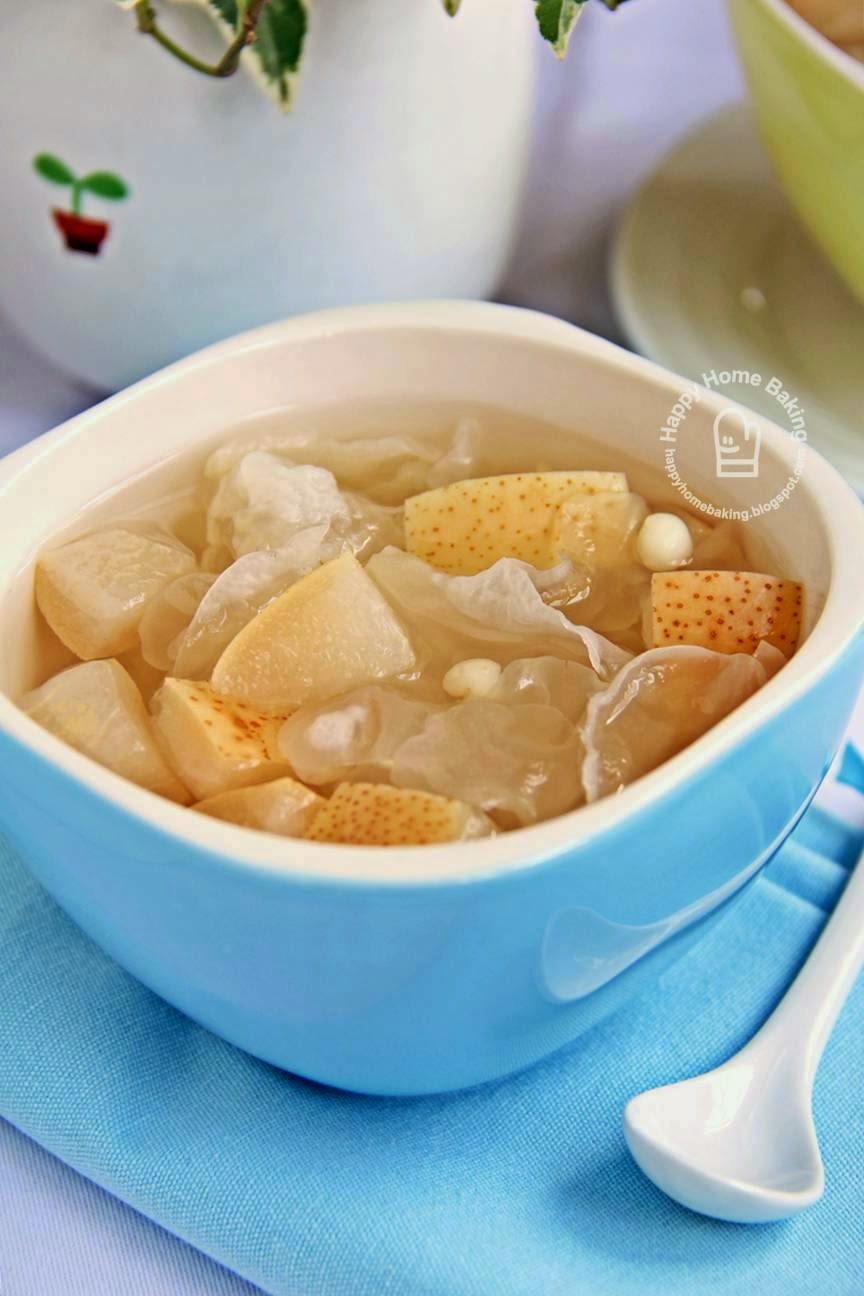 Method:
*Note: Chuan bei is not suitable for those with weak spleen and stomach and is not for treating cold coughs.

You can also try adding some yacon into the soup, it will give some sweetness to the soup in a form of natural sugar that diabetic patient can take and has prebiotic effect/good for colon;)

Hi Wei Ling, thanks for the advice! I have not tried cooking with yacon will keep a look out for it :)

Can I have a bowl? I am down with cough :( hehehe

So cooling and a much needed dessert for this terrible hot weather!

Hi...im marzita from kl.i just bought a small 21 liter oven with option top & bottom heating.when i bake cake especially sponge cake the cake will rise nicely however when the cake nearly cook the top of the cake will sink.when i take it out it continue to sink..is this because i over beat the mixture or underbeat it...or it because of oven temperature...i reduce temp to 150 degree celcius & only use bottom heating ...i also try to adjust the rack to the middle...but it get worse.when i bake choc cake the cake not rise properly so it result of a very heavy & wet cake.please help me...i really need ur opinion.tq

Hi, I am no professional baker and learn only through cook books and food blogs, as such I am only able to share what I have learned through experience and it may not be helpful. It is normal that the cake will expand and rise during baking, and when the baking time is almost up, it may start to sink a little and continue to sink and shrink (from the edges of the pan) a little after it is out of the oven. As long as the cake doesn't sink or collapse, and the texture is not dense or kuih like, it should be ok. For sponge cake made with whole eggs method, when beating the eggs with the sugar, beat the mixture until it doubles/triples in volume and when the beater is lifted up the batter should leave a ribbon like trail and will not disappear immediately. As there is no baking powder used, the cake may sink if the batter is deflated during the folding of the flour into the batter. The finished batter should be thick and has volume and will leave trails when you pour it into the baking pan. If the batter is prepared correctly, the cake shouldn't sink too much.

Every oven works differently, as such, you will need to try out and get a feel how your oven works. It is also best to use an oven thermometer to make sure the oven is preheated to the correct temperature.

For baking cakes, I usually put the pan in the middle rack and use top and bottom heat for even circulation of heat. For chocolate cake, it depends on which type...if it is chocolate sponge cake, it can be tricky because the batter will tend to be deflated when folding cocoa powder to the batter, how is the consistency of your chocolate cake batter? if the cake is wet, I suspect it could be under-baked. Make sure your oven is well preheated and do not open the oven door during baking as it will cause the temperature to drop and it takes time (may take 10mins) for the oven to heat up (this is based on my own experience with my old 20 litres tefal oven).

Hope this helps and doesn't confuse you too much ;)

Oh tq for your detail explaination.i think i have to get an oven termometer to know the exect temp of my oven.i usually use a bigger oven to bake (40 liter) & never encounter any problems in my baking.however after i move in to my new house the oven broke.so this is my temporary oven before my new kitchen cabinet & build in oven ready.i will try my best to be friend with this oven.;)...tq so much.

Congrats on your new house and your new oven :):)

I spoke to a chinese herbalist he said avoid eating eggs, oranges, deep fried & pan fried foods for "heaty" cough with yellow phlegm.
Consuming cold/ chilled foods & drink, sleeping under a fan for 8 hours
can also lead to coughs.Sleeping in air-condition room is okay if you're feeling hot.

Hi, thanks for sharing these useful tips!

Hi! Would u know how to tell the difference between heaty cough and cold cough?thanks!