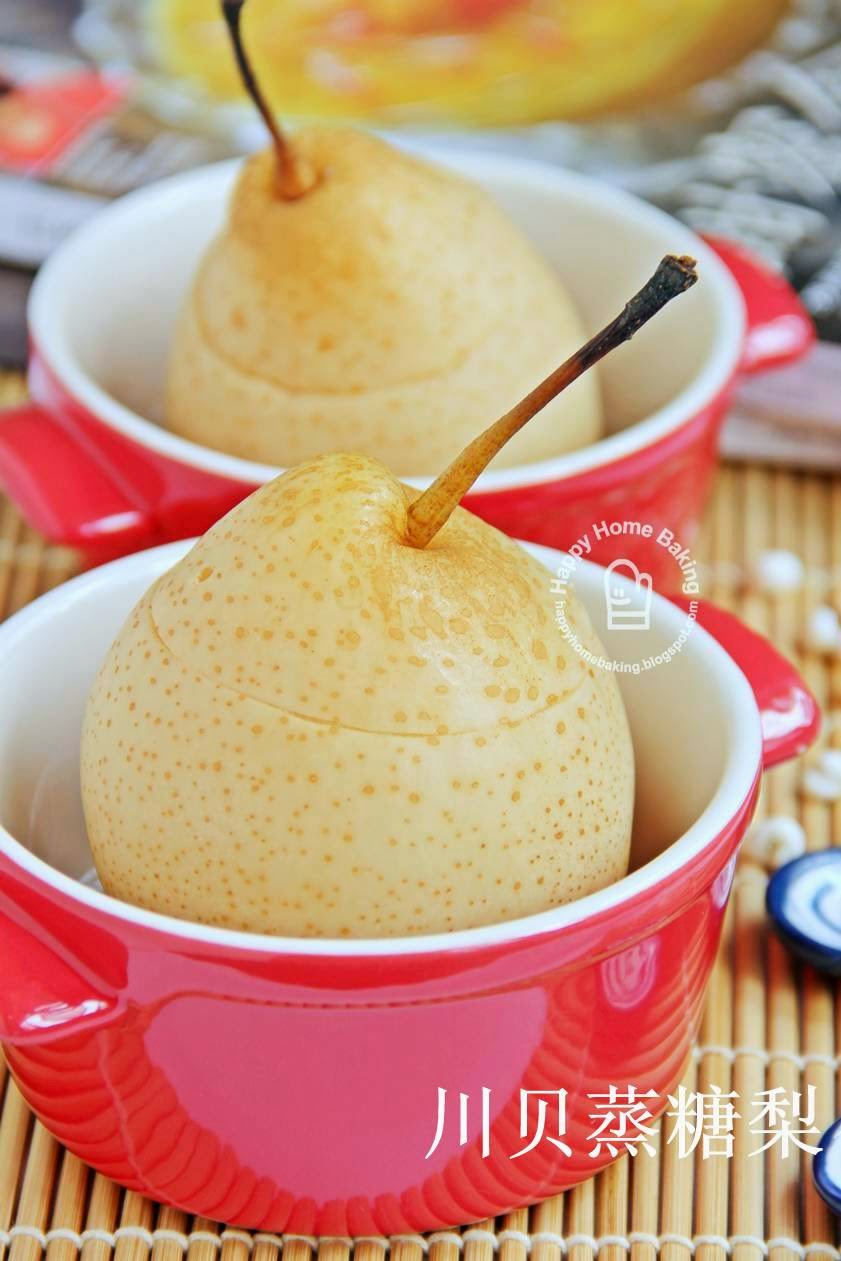 Last week, I received a gift from my blogger pal Sherlyn. She has sent me a handy pineapple tart mould and a cookbook filled with delicious dessert recipes. Thank you Sherlyn for your kind thoughts! 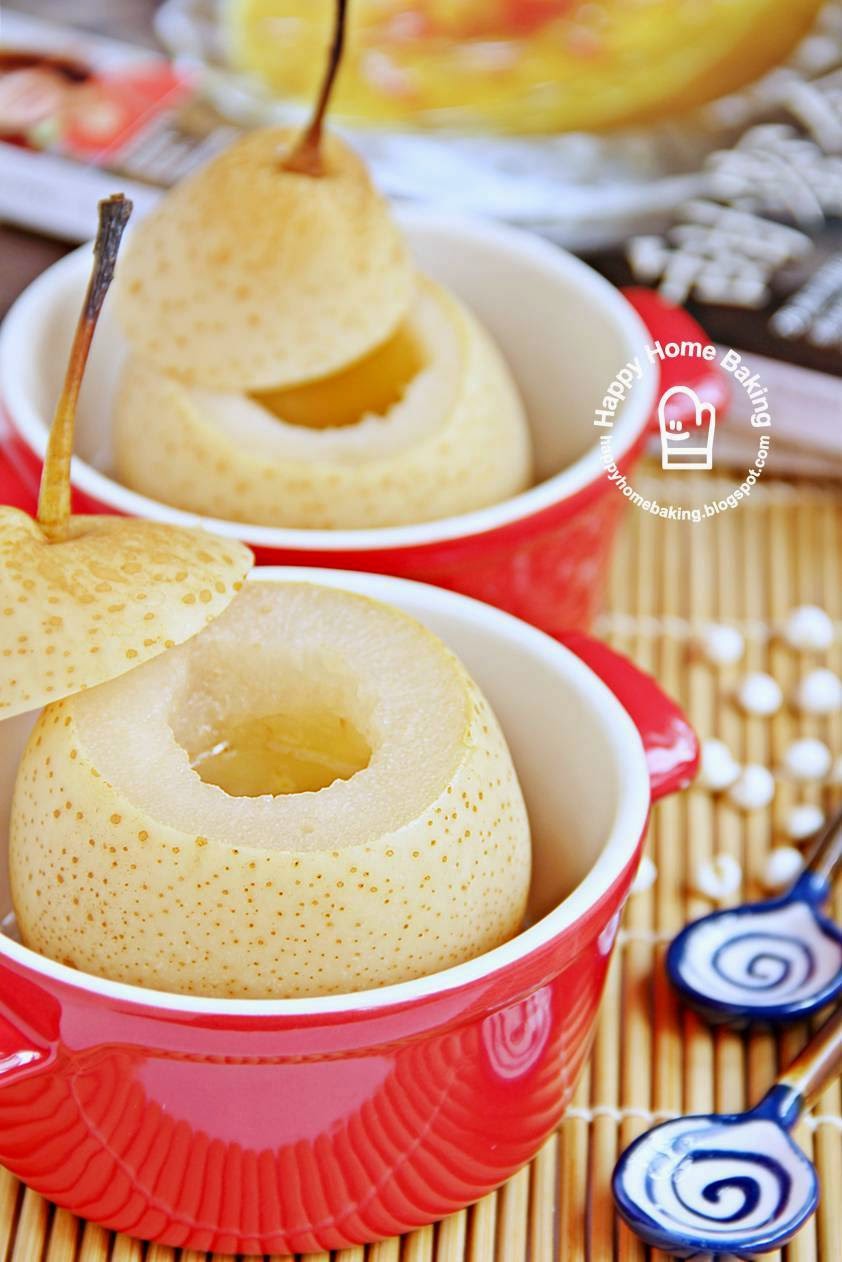 I flipped through the cookbook and this steamed pear recipe caught my attention immediately. Due to the hot weather, my elder child was down with a 'heaty' cold(风热感冒)...that is, he started having sore throat, followed by runny nose and soon developed cough. Besides giving him cold tablets, brewing cooling herbal tea, I also drowned him with lots of plain water, chrysanthemum tea and barley water. It will be a nightmare if the cough gets more and more serious as he is prone to wheezing. 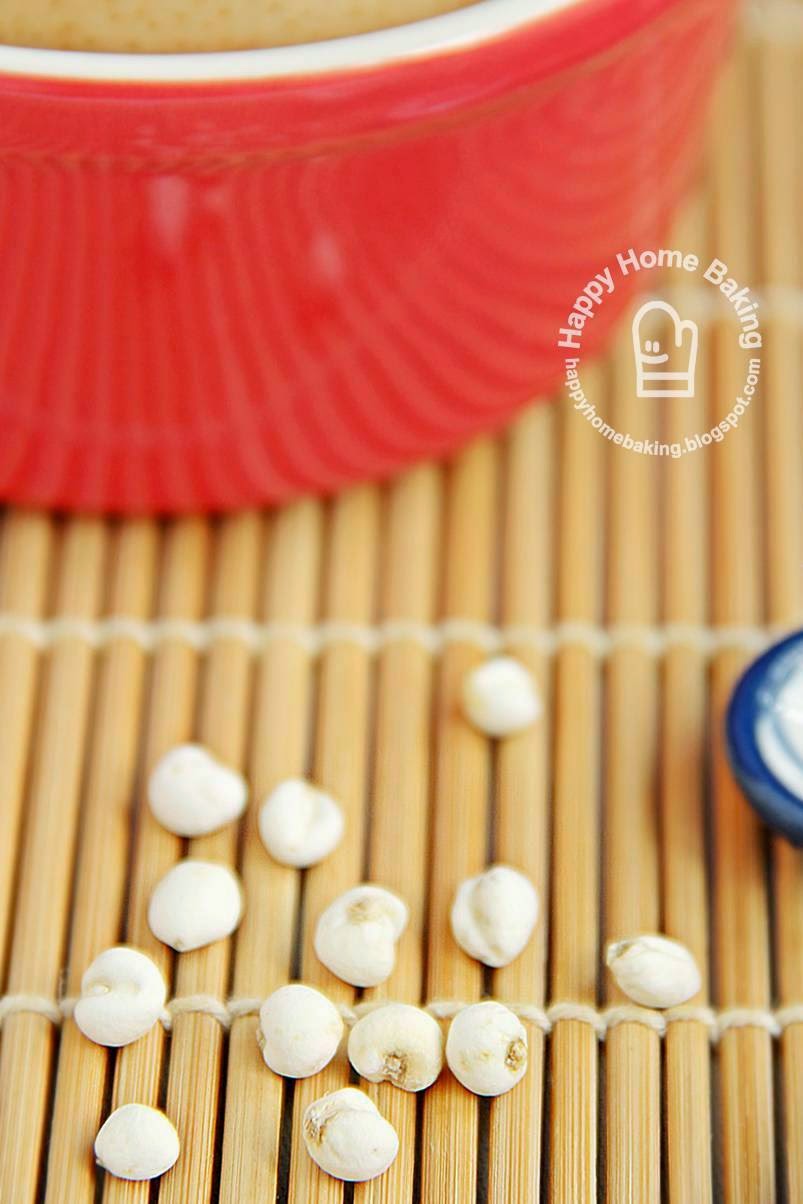 This steamed pear with Chuan Bei (川贝) or Fritillaria Bulbs recipe is great for treating cough (热咳) developed from heaty cold (风热感冒). It is not meant to treat cold cough due to 风寒感冒 as chuan bei is very cooling to the body.

The dessert consists of 3 main ingredients: asian pear, chuan bei and rock sugar. Chuan Bei helps remove heat from body and bring moisture to the lungs (清热润肺), loosen phlegm and suppress cough(化痰止咳). Asian pear and rock sugar also has similar medicinal benefits in removing heat, clears phlegm and relieve cough. As such, it is not recommended to replace the rock sugar with normal granulated white sugar. I used cane rock sugar which is yellowish compared to white rock sugar. 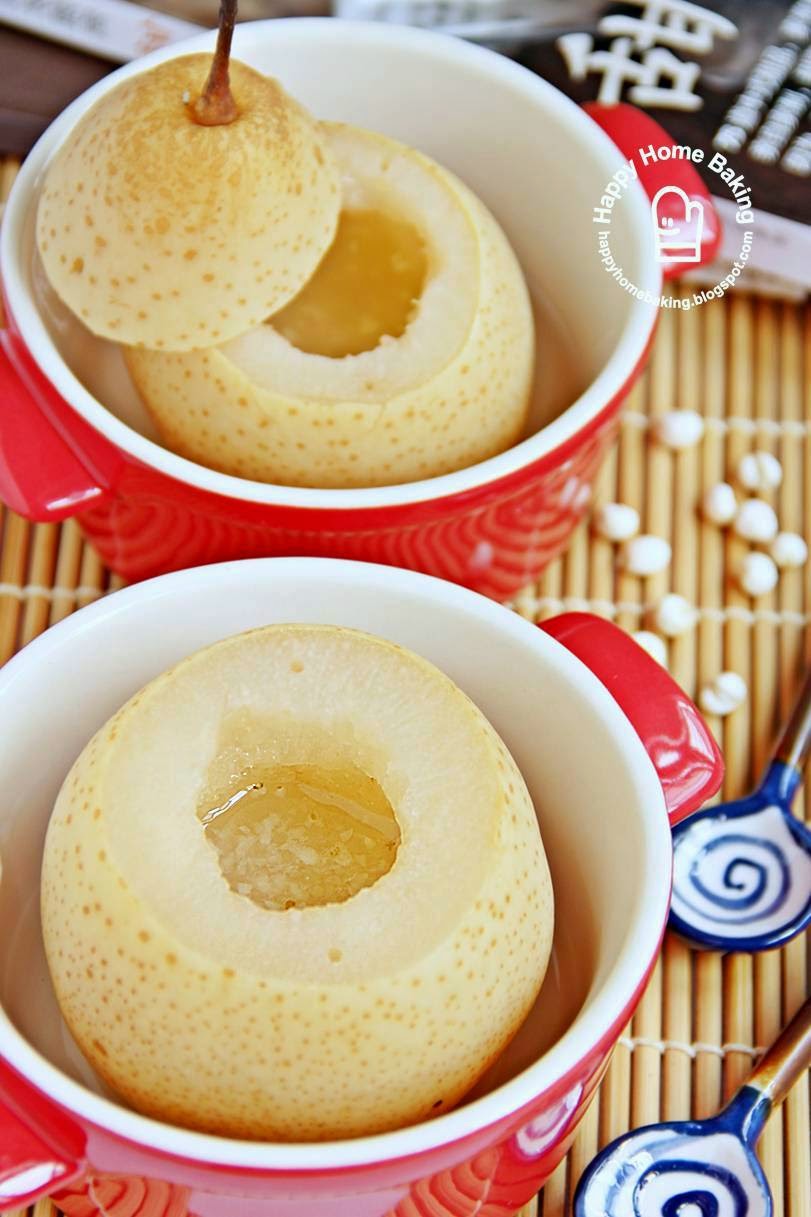 The preparation is quite straight forward and doesn't require long hours of brewing or double boiling. Basically it just involves cutting the pear to form a 'lid' and a 'bowl', remove the core and place crushed chuan bei and rock sugar inside the pear. The 'lid' is then secured to the 'bowl' with toothpicks (notice the two toothpick holes on the photo above?). Place the pear in a deep dish or bowl and steam for 30 minutes. It is advisable not to remove the skin of the pear as it helps to retain the juice.

The recipe says to place some water inside the dish, I believe it is meant to be drank together with the pear. However, it is tasteless so I discarded it before serving. Chuan bei is rather bitter but the rock sugar helps sweetened it and the dessert is really delicious and refreshing especially served chilled. For my elder son, I left it to cool and served warm, while the rest of us enjoyed it as a after-dinner cold dessert. What a wonderful refreshing treat to chase away the heat on a hot and humid evening!

Besides this steamed pears I have also prepared another similar dessert using chuan bei, pears and white fungus, will share the recipe in my later posts.  I made desserts with chuan bei four times over a week and my son has since recovered from cough, I didn't give him any cough syrup at all. I do not know whether it is really because of the healing power of chuan bei, but at least the dessert is a great way to quench thirst and a better dessert option than anything too sweet or heaty.

(the ingredients amount is for 1 pear, increase the amount by multiples depending on the number of pears)

Method:
Note: Chuan bei is not suitable for those with weak spleen and stomach and is not for treating cold coughs.

HHB, I always think that such 'remedy" is used for treating, never come across my mind to serve as dessert, thanks for sharing.

Hi Jess, I think if you leave out the chuan bei, it is a nice dessert for hot weather.

This is such a great idea! I am loving this!!