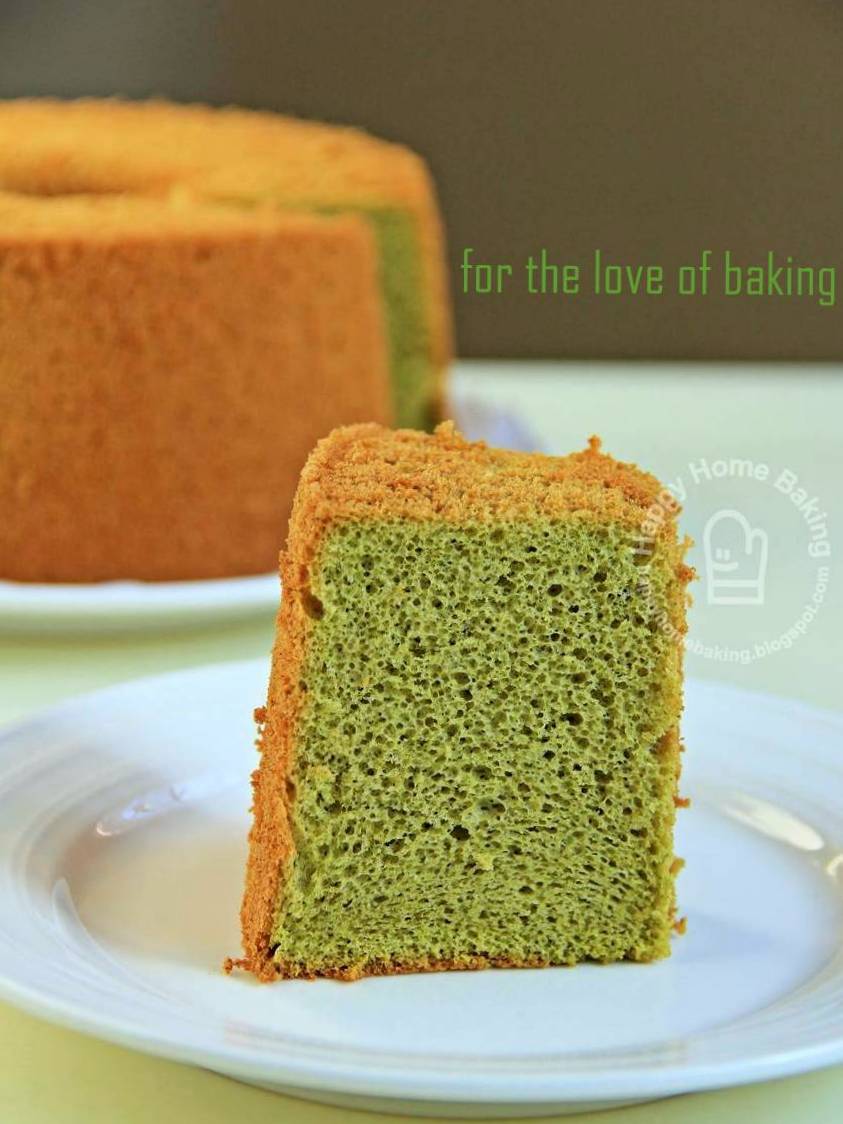 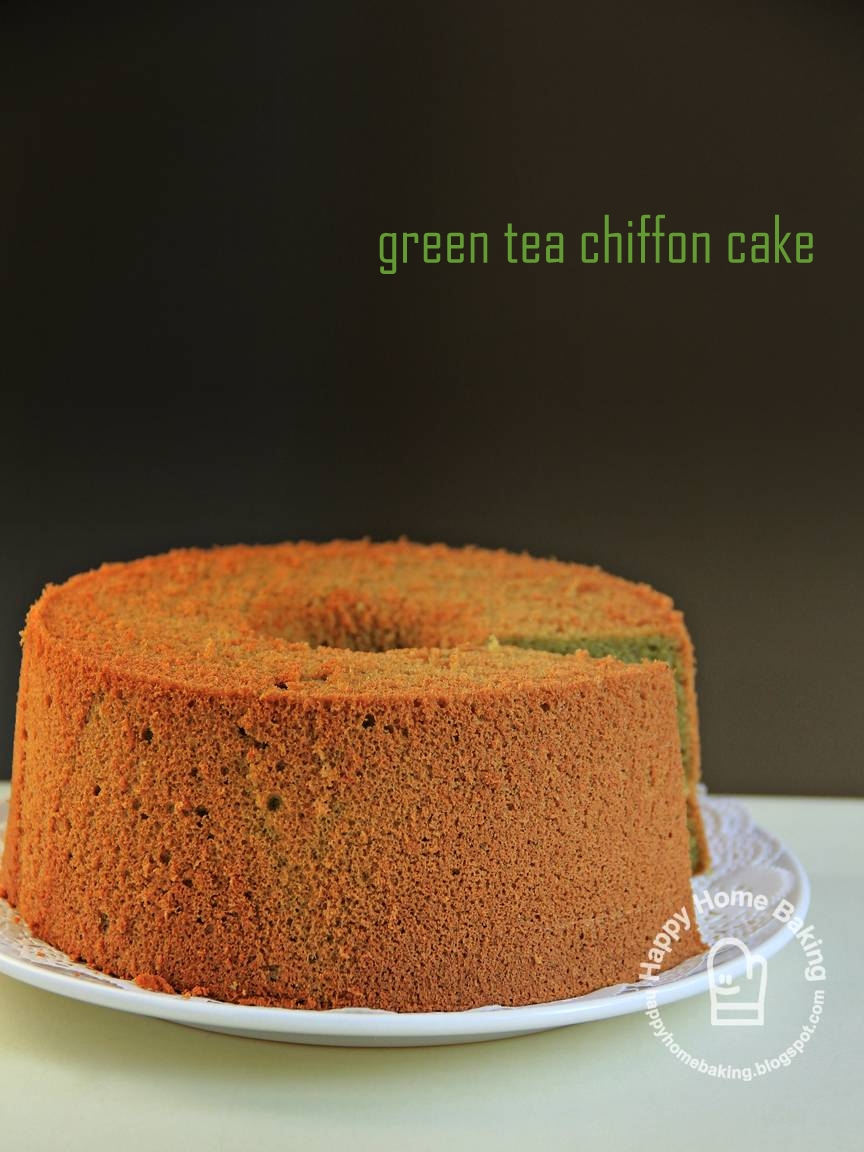 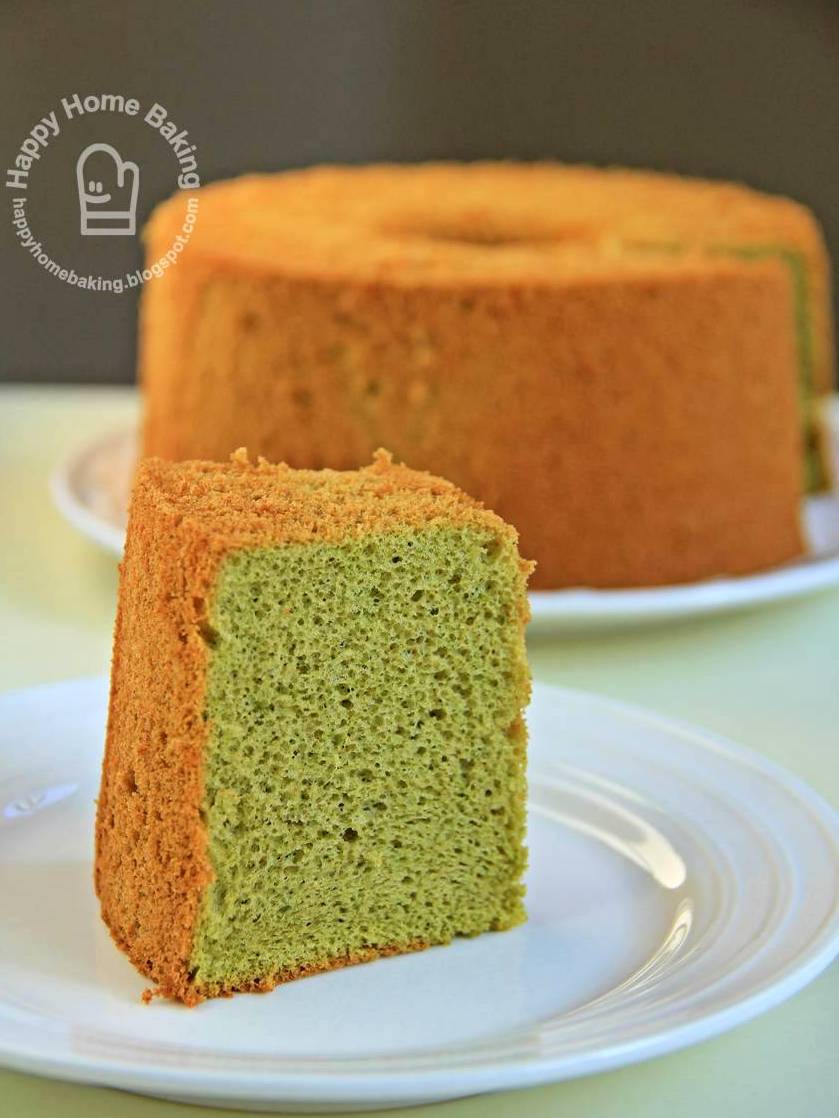 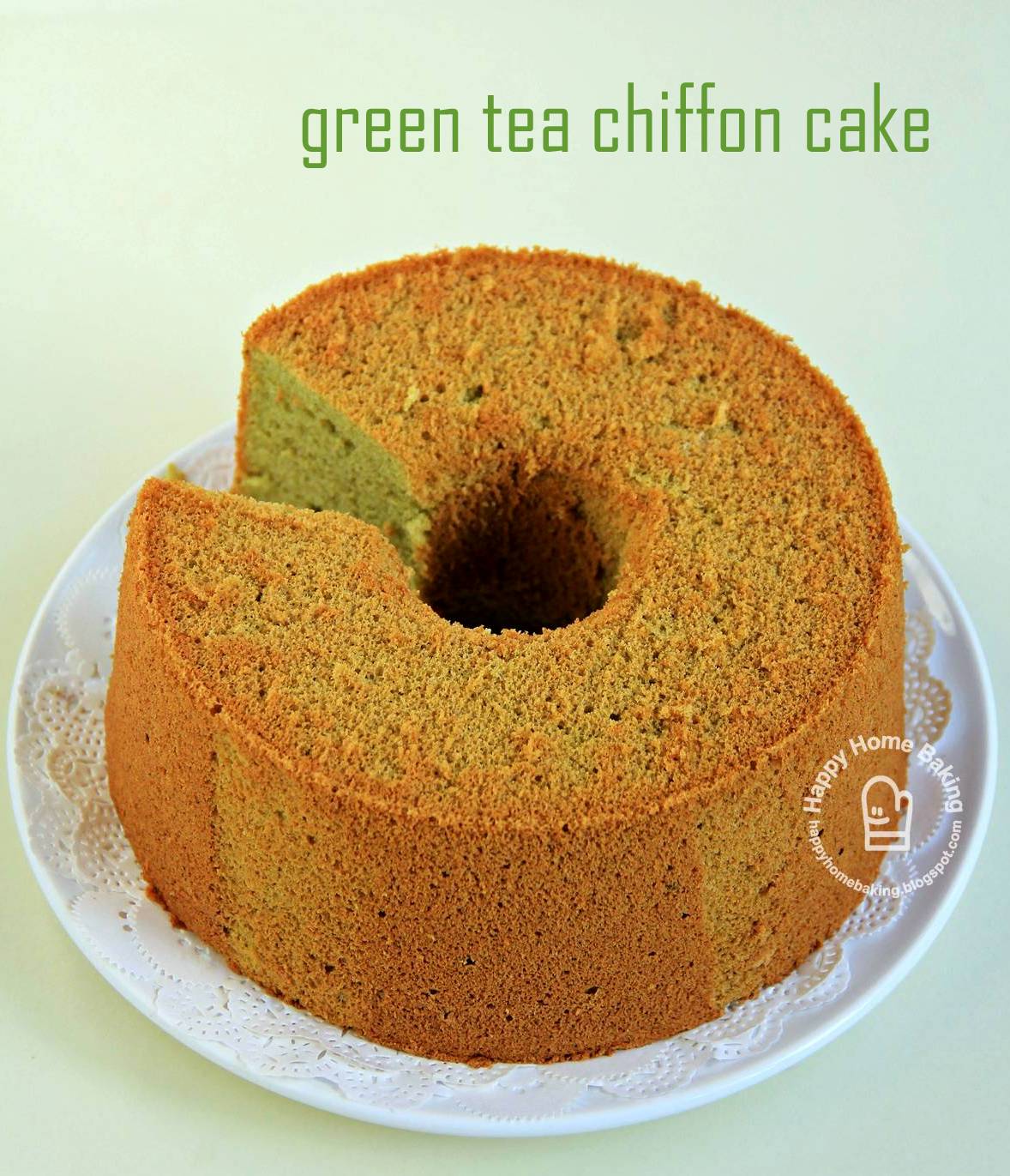 Yours look much better than mine! I think I always have the same problem when adapting recipes with more eggs (the original recipe uses 5 eggs). The result of reducing the recipe proportionately always results in a very short cake. I have better results with 1 extra egg white like what you said.

Ya, your chiffon cakes are always so tall and nice.

doesn't look bad at all ^_^" I love the green colour! Mine always seems to look more a browny green ><

Looks so delicious. The green color is so pretty.

I love all your chiffon cakes!

Your chiffon cake looks so soft! Seems like mine is not that successful as the top was wet after I left them in room temperature for half a day... will have to try again :p

I saw your post that you are planning to make a Jap soya bean chiffon cake. May i know where to get Kinako. Thank you.

Michelle, I have not bought soya bean powder yet...but I heard that it is available at Daiso plaza singapura.

Hi HHB, I just checked into my domant blog and saw your msg. Thanks for dropping by.

BTW, your matcha chiffon is looking good. I like the intense green.

with fresh milk, do you leave it at room temperature or use straight from fridge?

looks yum. Green tea anything is always good. I haven't made chiffon cakes for awhile. Your post has reminded me it's about time :)

Hi, I left the fresh milk at room temperature for about 10mins while I gather the other ingredients.

Hi HHB, your chiffon cakes always look so beautiful :) I am still trying to experiment more on chiffon cakes - so far my chiffon cupcakes always tasted good on the day I bake but the tops will turn wet the next day.. :|

Hi Baking Scientist, could it be due to condensation? I leave my bakes to cool completely before storing in air tight containers. Maybe u can try warm your cupcakes in the oven to heat up before serving hopefully it helps.

Thank you for sharing this. I am wondering if you are able to suggest alternatives for using eggs for baking, or is it possible to simply eliminate eggs (thus making the baked goods eggless). I came to know of one alternative which is buttermilk from other websites, but I am hoping to know what you think. x

Hi Amelia, I am sorry I hardly come across bakes that do not require eggs...so far I have only tried a couple of bread, cookies or scones recipes that do not use eggs.

I wonder if you could divulge the type of tube pan you use? (e.g. the dark kind, or the gray type you can get from Phoon Huat, or are there others?)

I've been wanting to get that nice crust on my chiffons (my favourite part of chiffon cakes) but can't seem to get it!

you can take a look at the picture of my chiffon cake pan here: (http://happyhomebaking.blogspot.sg/2011/10/another-lesson-learned.html)

I bought it from PH, it is a 7" pan. I usually bake my chiffon cakes (7") at 180degC, using top and bottom heat (no fan) for 30mins. Hope this helps. Use a thin bladed knife to unmold the cake, you can take a look at my picture here on how I unmold the cake (http://happyhomebaking.blogspot.sg/2010/10/purple-sweet-potatoes-chiffon.html)
Hope you find this useful...

Hi!
I was just wondering why you used milk instead of water? Does it make it more moist or something?
Thanks!

Hi, don't think milk will make it more moist...I used milk thinking that it may be more flavourful...

Tried this, it was fluffy and not so sweet, it's really good although I have the same problem with baking scientist, the top is kinda wet?:0

Hi Kaygiene, could it be due to your oven temperature? or you could have under baked the cake?

Hi any reason why do we add corn flour into the meringue? Thank you

It helps to stablise the meringue.

Thank u for your prompt reply! :)

Just wondering if I can bake this in a normal 7" round cake pan instead of a chiffon tube pan ?

Hi, you can use a 7" round pan but the batter will probably fill up to slightly more than half the pan. The resulting cake would be shorter and probably more dense...the texture will be more like a sponge cake than a chiffon cake. Line the base of your pan with parchment paper but do not grease or line the sides. Hope this helps.

Hi hi, just wanna tell you that i baked this twice and the second time is better. Just need to understand my oven better and i just bought an oven thermometer to help me ascertain the actual temperature of the oven! thanks for all your wonderful recipes...definitely will follow you for more yummylicious bakes :)