While I was flipping through my chiffon cake book, I found a newspaper cutting between the pages. It is a recipe which I had taken from a local Chinese newspaper several months back. I have totally forgotten that I had wanted to try this easy home cook dish when I first saw it. 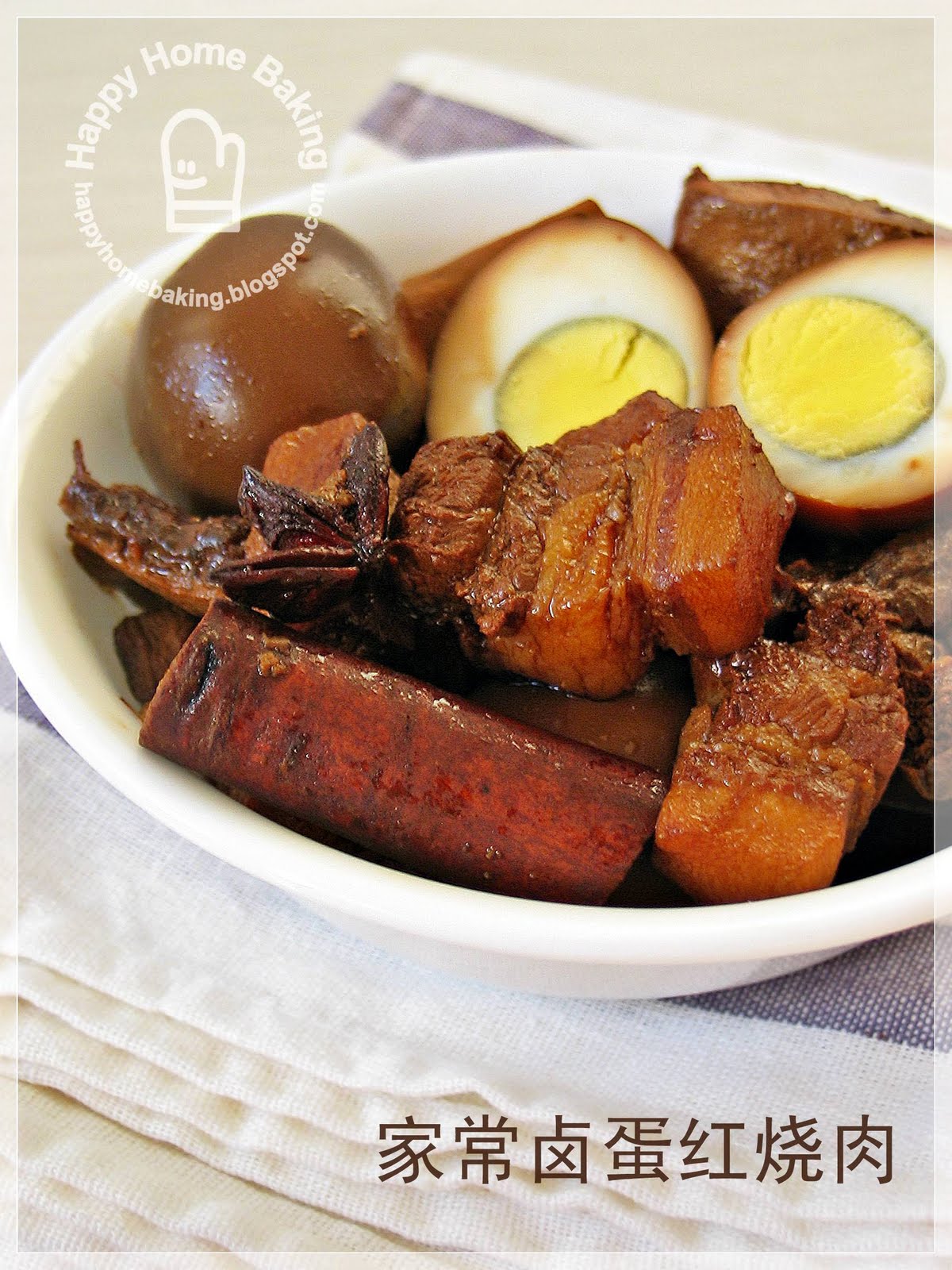 After seeking my children's opinion, I gladly went ahead to prepare this dish...Braised Pork Belly with Hard Boiled Eggs, 卤蛋红烧肉.

This is not the first time I have tried to cook this dish, but my first attempt produced something that was just edible (^^') I didn't follow any recipe or rather there wasn't any good and easy recipe for me to follow. I added whatever ingredients, spices and seasoning according to my own whim and fancy. Naturally the food was just passable not because it tasted ok but rather I have kids who are very accommodating to my cooking ;) 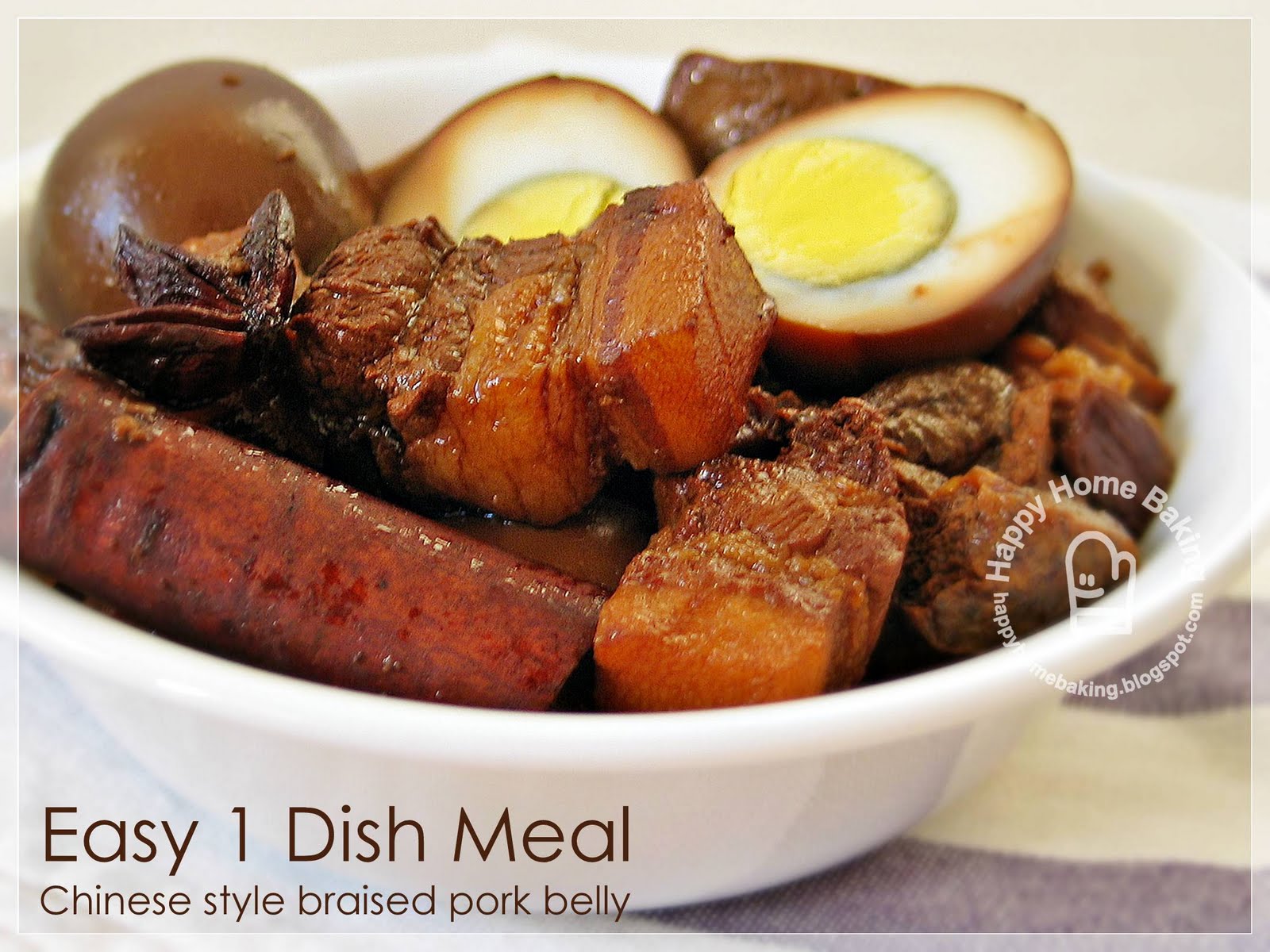 This recipe is really simple even a lousy cook like me is able to put it together without much effort. The best thing is, there is no stir frying involved, making it a 'no-fume', hassle free home cooking meal. The original recipe only calls for pork belly and hard boiled eggs as the main ingredients. I have taken the liberty to add in tau kwa (firm bean curb) and tau pok (fried bean curb puff) to make it a hearty one pot meal to go with plain rice.

The one cooking tip that I have picked up from this newspaper article is that, the pork belly has to be cooked in a pot of boiling water for five minutes to get rid of the impurities (I usually place pork ribs in cold water and bring it to a boil to remove the impurities, rinse and then place in boiling water to prepare the soup). To prevent the meat from losing its juice, the water has to be boiling before the pork belly is added in. While the pork is cooking, the sauce is prepared in another pot and brought to a boil. When ready, the pork belly is then transferred to the pot of sauce. The important thing to note here is, the sauce has to be boiling before the pork belly is added, that is, from one hot pot to another. By doing so, the meat will cook faster and will be tender soft. 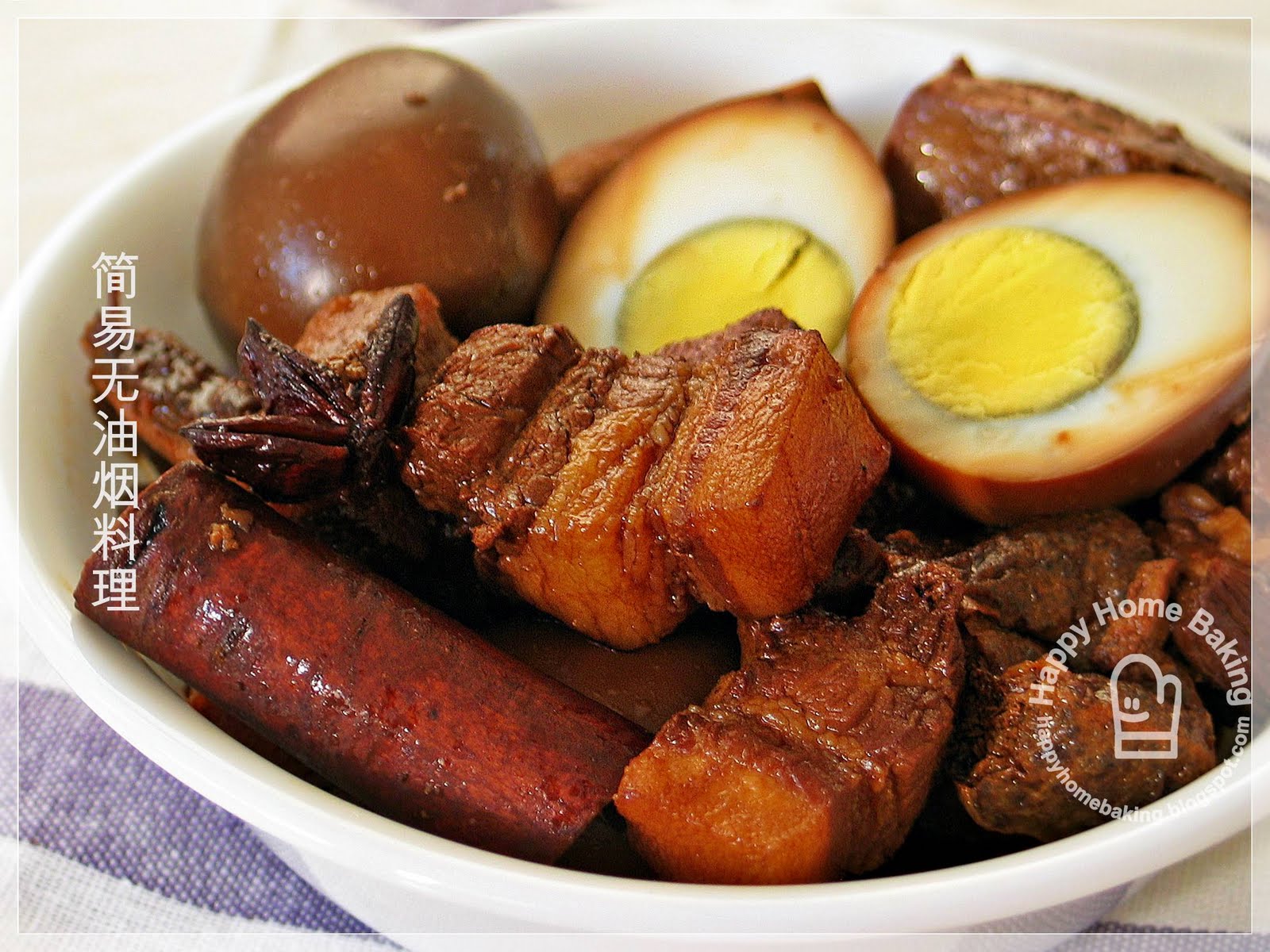 I was so proud of myself when the dish was ready :) It was even more satisfying to watch my kids savour every bit of the food. My younger son is never a fan of pork dishes, I was pleasantly surprised that he could finish all the meat I placed on his plate of rice. My elder son loves pork belly and I am sure he will keep asking for this dish. 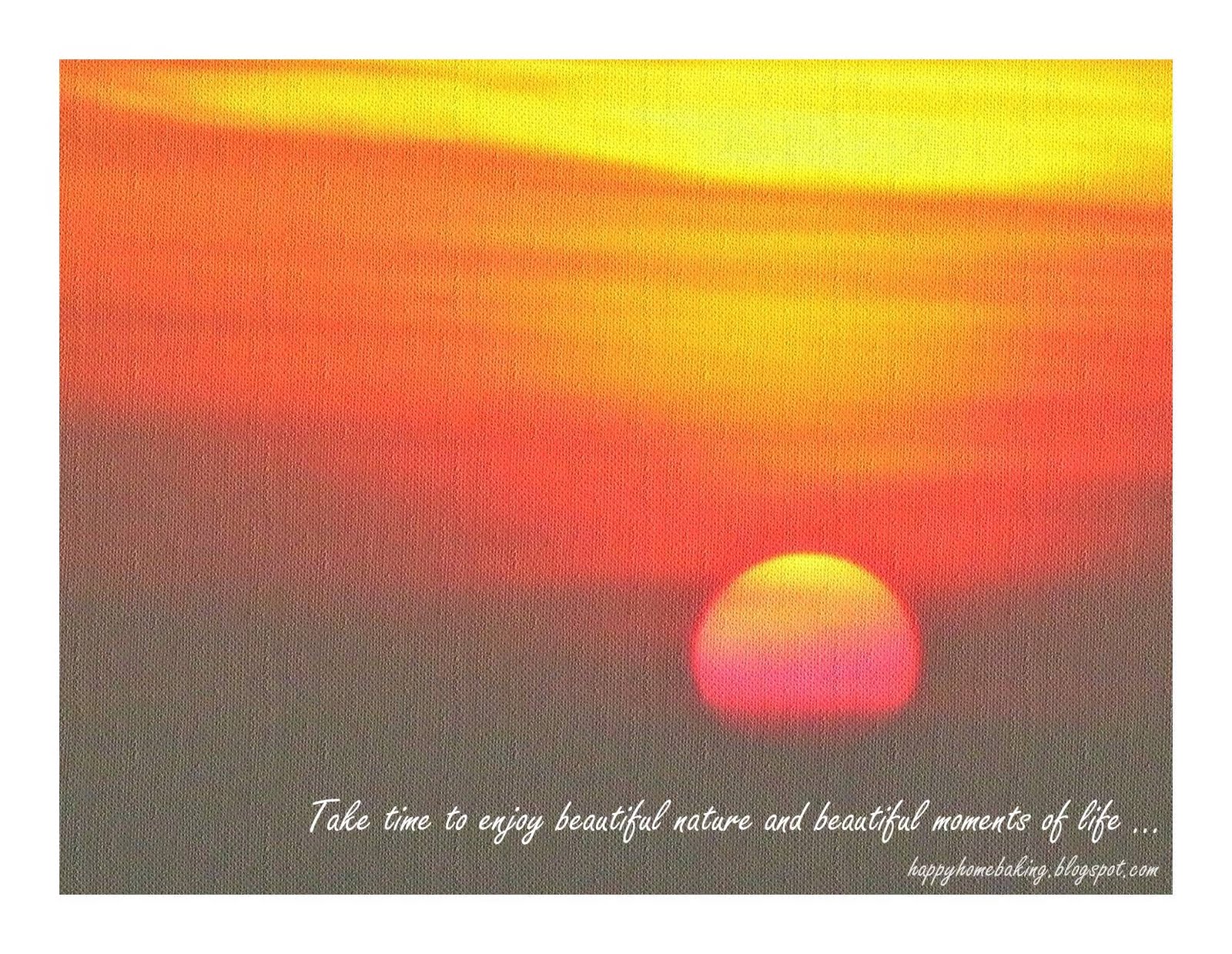 After I was done taking pictures of the dish, I noticed the sun setting. I get to enjoy sunset every evening. It is impossible for me to miss it since I am someone who likes to pause every now and then to enjoy the beautiful nature, be it the sun, moon or tiny flowers on the road side. I have so many times stood at the window to watch the golden yolk disappear into the horizon. Do you know? It doesn't take too long for the sun to set, it is gone within a few minutes. I was not even fast enough to get decent shots, and this is the best my very old point-and-shoot camera could produce.

I hope you have enjoyed reading this little snapshot of my life...thank you for visiting.

This is my all year round favourite dish ! I love both the meat and the 卤蛋 ！

Gee, this loooks really yummy HHB! My mum makes this really well too! And my parents-in-law cook this often. So I'm a happy recipent of the good food, that I didn't bother to cook them myself! But reading through how the pork belly is being cooked, it's really another good technique to acquire! I'm sure this dish won't last long no matter how big a pot you made!
I totally agree with you that adding tau-pok and tau-kwa definitely taste good!

Wow!Thanks for the nice pix and recipe. This is a quick, delicious and all time favorite for both young and old! It'll be on my menu this week ;)..
Good day!
cupcake

This is my son's favorite dish! I hv to learn from you to take moments to enjoy nature.

Your dish looks delicious! I'm sure it has " 妈妈的味道＂. I llove such dish, having all the ingredients in one pot. Best still, goes well with plain rice. Usually, I will add tau-pok, tau-kua, tauki, peanuts and quail eggs. Usually i din't put star anise and cinnamon stick, will follow your recipe the next time I cook this. Thanks for sharing.

Miss B @ Everybody Eats Well in Flanders said...

Super like! Reminds me of my mum's cooking. I can imagine eating that with porridge. Pour lots of the tau you bah juice over the porridge... Drooling already:)

Will try this recipe next time, thanks for sharing.

I just had this dish, but it never taste the same twice, only BLACK. LOL. I throw in any herbs of-the-day I have in the house, that is why.
Your method may help put some consistency in my Lor-Bak. Do you braise it in a pressure pot or slow cooker ?

I love this comfort dish to. My dad use to cook at least once a week and i missed his braised duck and pork belly which i can never achieve that homely fragrant taste.

Thanks for sharing the recipe.

this is gorgeous! thanks for the recipe and the great pics!

SSB, you can use leaner meat eg the 'muscle' cut, ask the stall owners in the market and they will know. If not you can use chicken wings instead.

neyeeloh, do drop me a note if you try it :)

edith, this is indeed a popular dish!

Jessie, this certainly reminds me of my mum's cooking.

Bee, yes the 'lor' is best for plain porridge…Teochew style!

The Experimental Cook, I cook it over gas stove, I don't own any pressure pot or slow cooker ;)

Ellena, yes, thanks for the reminder, I like braised duck too…someday, I will love to try cook it.

Oh I love this dish - not made it with tau pok before, thanks for the great idea. Must pick some up from Chinatown!

This recipe rocks. My girl, who is usually picky, actually loves the sauce. No polite "hmm, it tastes interesting" kind of stuff.
This, even when I discovered I left out the cinnamon stick after polishing everything.

I just cooked this last week! I don't have a recipe, just dump in whatever I can find in my kitchen. That explains why the taste is never consistent :P

I usually blanch the meat before cooking. Let me try your method next time.

My kids like tau pok as they find it very juicy after soaking in the sauce. They dislike hard-boiled eggs so I omit that. But without eggs, somelike unlike the regular lu rou.

i like this recipe. so much!! thanks for sharing this perfect menu.

I thought this is a delicious dish that me & my husband would love. Would definitely try it sometime this week. Thanks for your sharing.

i tried pork muscle but the meat turned out to be quite tough, can you tell me what went wrong?

Tried this recipe yesterday for a gathering. It was third dish that I prepared since morning, I am pretty exhausted when doing this dish for 1kg pork belly, and went back to take nap after putting it to simmer. Fortunately, when I woke up an hour later, it was nicely done. And in the evening, every one said this dish nice. Thanks for sharing!