Missy over at Sweet Crumbs made herself an awesome SPAM sandwich for her dinner. I was so inspired that I made it almost right away! 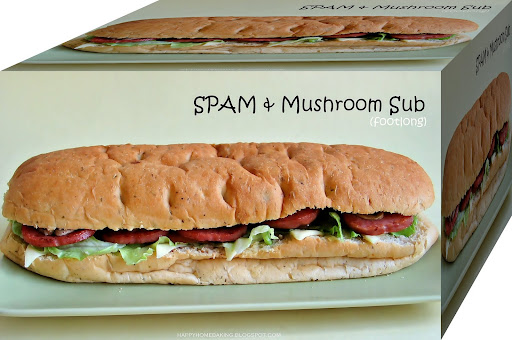 I was glad that I did not just bookmark her recipe and put it aside, otherwise I wouldn't believe that I could actually create a deli-style sandwich at home :) 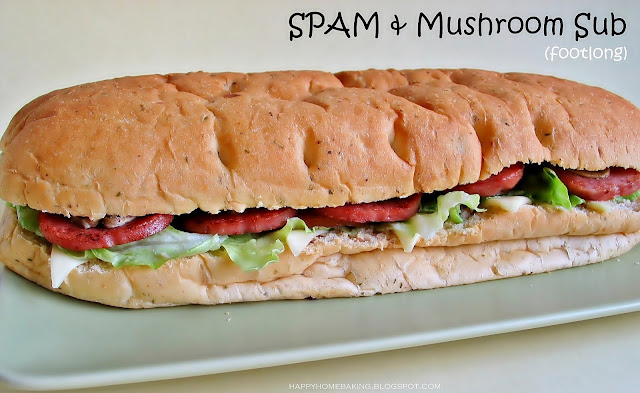 No, I didn't make the bread, just like Missy, I bought a loaf of Gardenia focaccia, which happens to me my favourite bread before I started baking bread at home.

I really like her idea of pairing luncheon meat with mushrooms. Even though we all know that we should cut down on processed food, I just can't resist the temptation of a SPAM sandwich. I believe as long as we eat everything in moderation, we should be fine...and it is not as though we have luncheon meat every other week, I couldn't even remember when was the last time we had luncheon meat in our meals, it must be many moons ago. And, I bought SPAM Lite, which claims to contain less fat and less sodium (well, it still taste loaded with sodium!) Yes, yes, I am trying hard to justify that I am not a bad mom because I feed my kids with junk food ;') 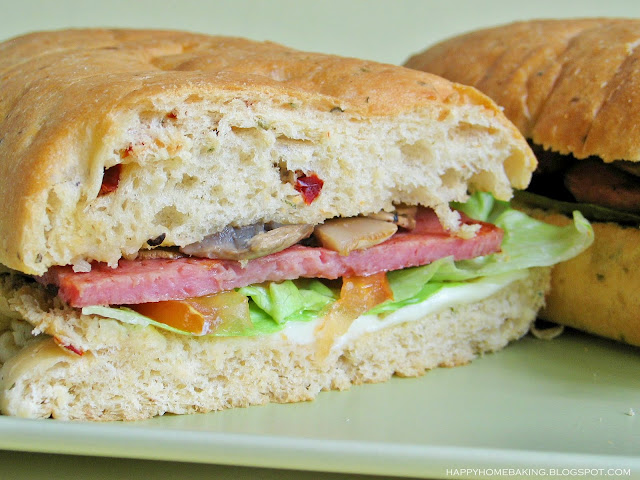 I sliced the loaf into half, spread some butter on the cut-side, arranged slices of cheese on one side of the loaf and toasted them in the oven for a couple of minutes. This step does wonder to the bread, the crust is slightly crisp and the bread tasted freshly braked. I then layered it with lettuce, tomatoes, sauteed fresh button mushrooms (seasoned with some pepper) and pan-fried-till-golden SPAM slices. 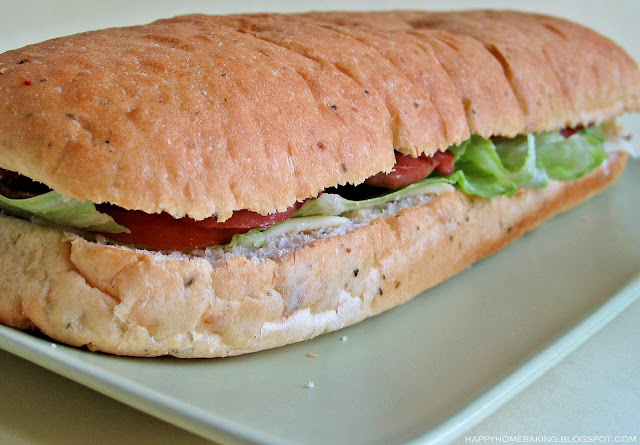 I have never been a good cook, but I was so proud to be able to put together a foot-long sandwich. During the preparation, I felt as though I was a sandwich artist ^_^" 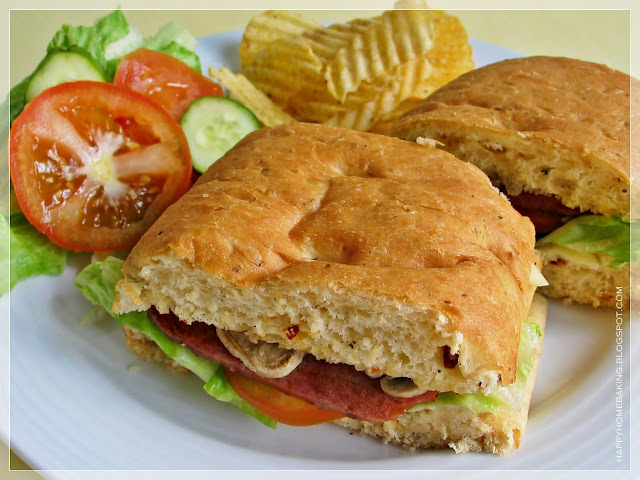 So here's another quick-fix meal, the kids were all bright eyed and bushy tailed when they saw their yummy 'deli-style' lunch.

Thanks Missy for sharing such a great meal idea!

Looks like a professionally made deli artisan sandwich HHB! I used to work in a sandwich parlous previously so if you need sandwich idea, why not try turkey cranberry sandwich or chicken avocado sandwich. Cheers!

Wow! After I saw Missy's SPAM s/w, I was already tempted to buy SPAM to eat. And now, you've also made it! Gee, looks like I really cannot resist the temptation too! Similarly, I also usually buy SPAM Lite as there are supposedly to have less sodium. I'm sure anyone would love to have this sandwich! Yummy!

Coincidentally, we had this for dinner too! It's another of my lazy days :P Your sandwich looks appetising!

Hi HHB,
You make the sandwich looks so PRO!!! Can beat the subway already! I love sandwich a lot, it could be my 3 meals for everyday :) I've not tried the gardenia foccacia before, it looks like very good. I should give it a try. Thanks for sharing! Cheers!

Sandwich artist, surely you are! Now I'm craving for subway. I never thought of making one of these myself. You have given me an idea too. Thanks HHB :) They look absolutely delicious! Sandwich definitely my kind of thing :D

I like your photos, great work :)I seldom eat luncheon meat nowadays, although I like it very much:)

Oh, HHB!! Your kids are truly blessed with a great mommy like you!

The sub looks great and delish! I've always wondered though why the brand name SPAM. I think it makes the whole deal sound so cheesy ...

Lovely writing! Keep it up!

Hi HHB
How did you manage to shot these pictures? It is as though the sandwich is on my PC screen...I wanna take it and have a bite?
Must learn how you take it the pics.

Your house must have lots of direct sunlight.

Thanks Quinn for the suggestion :)

Hi Jane, I agree it is so difficult to resist the temptation ;)

Hi Blessed Homemaker, you are not lazy, after that little accident of your DS and DD2, you still took the trouble to prepare dinner, if I were you I would have dinner at the hawker centre.

Hi Grace, I can have sandwich for 3 meals too! You made lovely focaccia, you should made your own! Nothing beats homemade bread :)

Hi tracieMoo, I love sandwich too...especially the bread. I wonder whether there is any bread recipes out there so that I can make my own subway bread?!

Hi Min, so far I have not heard of anyone who doesn't like luncheon meat ;)

Hi Pei Lin, I agree with you about the brand name!

It really looks easy to prepare, and most importantly it looks yummy...make me think of Subway sandwich..hehe

Great shot! Now I've another great menu to prepare for lunch/dinner for my family, besides your "sushi sandwich". My 2 kids love the later very much! The portions they eat are quite amazing! :D

Your sandwhich looks actually like the one from Subway!!
My family love the Gardenia Focaccia loaf too, in fact 2 loaf is not sufficient for us :p

Like you, I am always think giving luncheon meat, ham, saugage to my boys make me a bad mummy. I try not to buy it too often and thankfully I am not a luncheon meat fan and I try to subsitute with Chicken / Egg Mayo or Tuna instead.

Please keep the post coming, you never fail to inspire me with your simple & nutritious meal

I love how you make the simplest food look so delicious! Thanks for sharing these great pictures!

Spam or even just the good old Luncheon meat is always a trusty(albeit unhealthy) favourite for anything. I can't think of anyone who don't like it. Your sandwich is visually scrumptious and I tempted to double deck it with more Spam! haha...

WOW HHB Its good to have so many positive reviews about your SPAM Subxxx sandwich!! it looks fantastic and definitely a great treat once in a while for kisd!. doesnt take very long either! and luncheon meat is BEST :)

wow my bf would have love this! he love luncheon meat. I've not tried gardenia focaccia even though I've been wanting to buy it lately. Looks so delish like my favourite subway. ;)

Your sandwich looks really yummy!!! I like your photography style ;-)

That's one big yummy sandwich!
Please check my blog, there is an Award for you.
Cheers,

It is so lucky to have a mother like you who can cook up diffrent and delicious food EVERYDAY! Also, you seem to choose healthier food, which is also what good mothers do to their child. If i could choose mothers i would'nt mind choosing you.(I am only 13.)