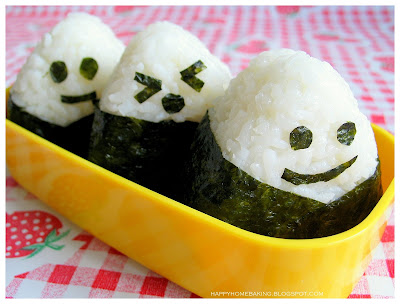 Whenever I run out of idea what to prepare for lunch, I will just make some Onigiri or Japanese rice balls. These are just so simple to make...you will only need to cook some Japanese rice or use any short-grain rice like CalRose. I made these Salmon Onigiri with a brand of Australian CalRose rice...which I spotted on a supermarket shelf. I bought it to try as it's available in a 1 kg small pack.

One good thing about onigiri is that you don't have to add any sushi vinegar to the rice, it takes away the hassle of mixing the rice and fanning it at the same time...you will know what I mean if you have tried making sushi rice. In order to make good onigiri, there is this extra step which I'll follow, that is, after washing the rice, I will drain away the water, and set the rice aside for 30mins to an hour. When ready, I cook it with a rice cooker...using the ratio of 1 cup of rice to 1 cup of water. Just like cooking our usual long grain rice, I will not open the lid until 10-15mins after the rice has been cooked. I'm not really sure what's the reason behind, but it has long became my habit to do so. 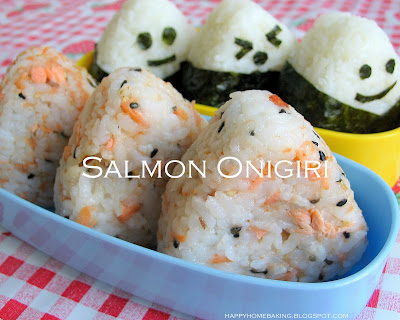 The salmon fillings is very easy to prepare too. You will only need to season the salmon with some salt and/or ground pepper...pan fried it till cooked and flaked it with a fork. I used the salmon fillings in two ways. I used some to wrap inside the rice balls, and the rest I mixed them with rice, some black sesames, and some furikake (Japanese rice seasoning), before shaping them with a set of onigiri rice mould. 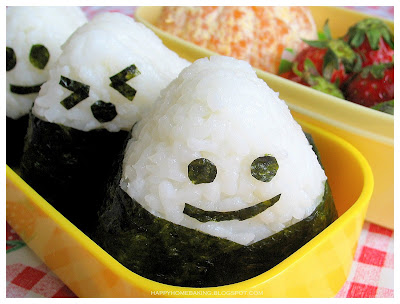 I dressed up an otherwise plain looking rice ball with seaweed, and with a kitchen scissors I cut out some eyes and mouths. I thought they look like little men in tuxedos?! My kids love rice balls...especially those I made using fillings such as pork floss or otah ;) We find these salmon version a little bland on it's own...so we dipped them in some Japanese soya sauce. 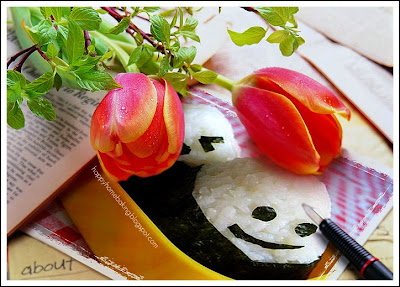 I can't remember how I stumbled onto this site, which provides many fun image effects for free. Thanks to FunPhotoBox I am able to create such a lovely photo effect. Hope you will also have fun playing around with your photos too :)

Ha, these are precious! An aesthetically-pleasing and yummy lunch. I love it.

It's really an eye-catching photos !

The salmon onigiri is also an easy-to-make riceballs.

The rice balls look very cute. I love it.

omomo sooo adorable! I'm not a fan of fish, however with another filling these would be such a cute lunch! ^-^

Hi HHM...adorable rice ball! is actually the correct way of not opening the cover immediately after the rice is cooked which i usually do also but dunno y the reasons hahaha...thanks for the funphotobox link also :)

Your rice balls are so cute! My kids also love sushi rice with lots of lots of pork floss too! :D

Hi HHB,
I've been reading your blog but never post. This is my very first posting ;)

I make salmon onigiri whenever I'm too lazy too cook. I steam the salmon instead. Also, I add ikan bilis powder for extra flavour.

I bought similar moulds but find that it's very difficult to keep the onigiri in shape (the rice keeps falling apart when you try to bite it). Probably bcos I didn't soak the rice before cooking? Or possibly bcos I added too much salmon flakes :P

Like the idea of adding pork floss as fillings. Will do that next time, I believe my kids will love them too.

Very cute, what a good idea for lunch boxes.

Hi, Reena, it's great that you finally break your silence :)

Yes, if your filling is too much, the rice will not keep it's shape. What I do is, after adding some rice in the mould, I will use a spoon to make a hole in the middle, add the fillings in the hole to keep it in the centre, then cover with rice. Press the mould down real hard to compress the rice. If you find that the onigiri is still too loose, you can compress it further with your wet hands or use a clingwrap.

As for the pork floss, I will mix it with some mayonnaise...it helps to make the floss stick together. dont worry about the taste, it is delicious! I will love to hear from you more often :)

I follow Bakeling and reach your home.
Thanks for sharing, and my kids love sushi and always ask me to prepare. I will try your recipe this weekend.

Hi,
Thanks for sharing, don't mind can you tell me where to get the mold?

Hi Happy homebaker
May I ask where can I get the mould?

As I was reading your post, I was hoping that I am one of your kid to have a share of those lovely sushi! It jus look so yummy-delicious!

Thanks for the wonderful...I shall be a good mum and make for my kids instead :-)

My mum says that by not opening the lid when the rice is just cook.. it allows time for the rice to absorb the steam back.. making the rice nicer. (or something like that).

But why drain and leave it for 30 mins? This I wonder why?

Hi Anonymous, you can get the rice mould from Daiso.

Hi lizziebeth, for the Japanese rice, you will need to wash and drain and leave it for at least 30mins...this way it will help absorb moisture...but Don't soak the rice with water.

Hello, I came across you blog today by looking for photos for a pie. Your blog name caught me eye and I am very happy I stopped by. Your recipe here looks very easy and I will try it. Also I am very intrigued by your list of Simple Dishes. I hope to try the Baked Japanese Croquettes first.

I am glad I stopped by and I hope to be a regular visitor!

Thank you,
MaryAnn from UAE

I love your spirit, turning an ordinary thing into something fun!
You made me smile. Thank you!

Hi
After I saw your picture of salmon onigiri, I went to daiso to buy the mould immediately. will also buy the ingredients for this weekend. Really admire your spirit!

they are so cute!

I recently came accross your blog and have been reading along. I thought I would leave my first comment. I dont know what to say except that I have enjoyed reading. Nice blog. I will keep visiting this blog very often.

May I point out that your salmon onigiri photo has onigiri spelt as 'origini'. ;)

Hi Roll, this is so embarrassing :') Thanks for pointing it out, I have changed it :)

I made some salmon onigiri yesterday for my small cousin, but i added carrot, broccoli, celery, mushroom dices into the rice mixture to add more flavour. My cousin like them alot. Thanks for sharing this recipe.

Hi HHB
Make this yesterday. I used the Calrose rice you recommended as above. I mixed in some sushi vinegar. I find the rice is more fragrance after the vinegar added into it. Yes, my son loves the onigiri very much! I need not have to feed him when onigiri ws served to him! Thanks for another lunch idea!

Hi Min, it is always very rewarding when you see your little one enjoying the meals you prepare for him :) My kids love onigiri too!

Hi HHB, I tried this on Saturday and my little one love it so much that he ate 3!!
Thank you so so much for the recipe

Thank you very much - photofunia is really nice site. Another site like this is Picjoke.com - funny pictures - they make a new effect every day!

owh..the onigiri you made is so cute..i wanna try as well! :)

Oh this looks so cute, love it!

I found your really appetizing Onigiri-Pictures via Google and I wanted to ask you If I could use one of the pictures for our student magazine?