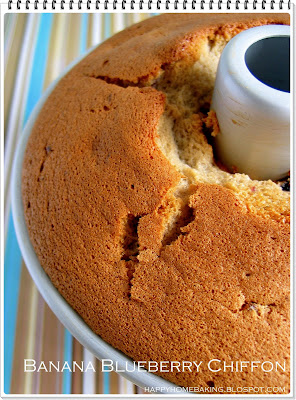 I wasn't in the mood to make any bread recently...in fact anything that appears too complicated would be strike out from my to-do list. I sat down one morning and spent some time running through my pile of recipes before I finally decided to make a chiffon cake. Although the steps are pretty straight forward, I always find it very challenging when it comes to making a chiffon cake. I have to keep my fingers crossed all the time...from the beating and folding of the egg whites, the baking temperature and even the unmoulding. I would only heave a sigh of relieve after I cut a slice of the cake. I would never know whether I got a chiffon cake right until I have tasted it. 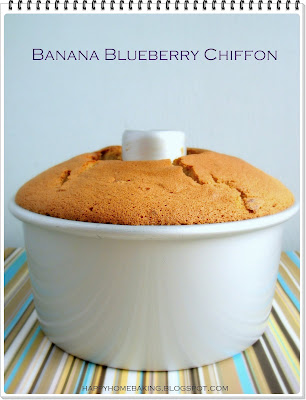 I adapted the recipe that was meant for a strawberry chiffon cake and turned it into a banana blueberry flavour by using my homemade banana & blueberry jam. The preparation of the cake was uneventful...as the ingredients are really very simple and the steps easy to follow. The only thing that I am still not sure was when to stop beating the egg whites! 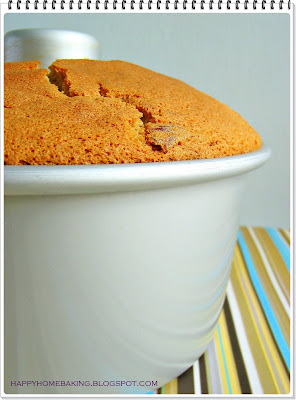 I was lucky that my oven was under a rather stable condition...the cake rose high and mighty during baking...and even when it was close to the finishing time, it didn't deflate too much. This is indeed a rare occasion, most of the time, my chiffon would start sinking even before I removed it from the oven. I would also attribute it to the recipe, as I find that recipes from this Taiwanese author, 曾美子 are very reliable. 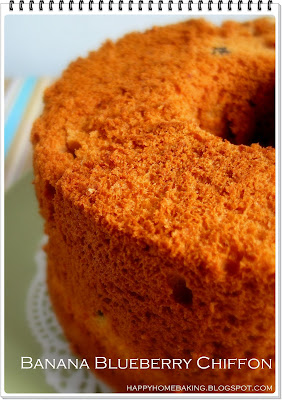 I allowed the cake to continue to bake for a further 5 mins beyond the recommended time as I have little faith in my oven ;) I was glad I did the right thing as the cake has got this lovely golden brown crust after I unmoulded it. 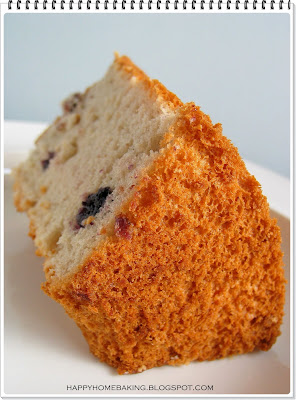 The texture of the cake was wonderful...light, cottony and very fluffy. It was an instant hit with the kids. However, I find the cake a tad too sweet, likely due to the sweet jam. I like the chunks of blueberries embedded in the cake though. I'd made a mental note that I'll have to cut down the sugar a little the next time I were to make this again.

hi HHB,
Yummy, shall try this recipe.
Thanks for sharing.
Rgds
Mayvis

Wow thats interesting. using ur own home made blueberry jam for yuor own blueberry chiffon cake! Im sure that would be yummy.. !

maybe u can try home made kaya, with a pandan kaya cake too? just a thought ;)

Hi HHB,
I'm in the same exact thoughts as you whenever I want to bake chiffons! I don't know when to stop beating the whites! I don't how it will turn out...I don't know if my folding will cause the bubbles to burst! Gee... Your cakes are always so beautifully baked, I didn't think such thoughts will run through your mind! Now I know... Thanks for sharing your thoughts, at least I know I'm not alone! :) Your chiffon looks very yummy...

Thanks for posting. Interesting that this chiffon recipe does not use cake flour or cream of tartar. First time I am seeing plain flour here. I think I will adapt it to make a normal cake without the beating of egg whites which I find a chore as I don't want to attempt a flopped chiffon cake go to waste after putting in so much effort.

Is the fruit juice the substitute for vanilla essence & also acts as a softening agent for the cake to so that is it moist?

Is this a Taiwanese author cos the name sounds Japanese?

Hi Passionate About Baking, there is so much things that I do not know about baking! I learn everything from cookbooks and it is kind of difficult to imagine how the egg whites should look like from photos ;)

Hi Anonymous, you can use cake flour instead of plain flour. Most baking books written in Chinese will state 'low-gluten flour' which can be taken as cake flour. I tried with plain flour for this recipe and it was ok. I am not sure what's the purpose of the fruit juice...but I doubt it is used in place of vanilla essence. Yes, the author is a Taiwanese.

Hi HHB,
Oh dear! That makes me a late "adopter". :( I've been to numerous workshops and I'm still not familiar of how the egg whites will be. Oops! That means, you're better & more talented! ;)

Yum! This cake looks delicious. I love the flavors you've combined with the wonderful texture of chiffon cake!

Your cake came out so fluffy and delicious looking :). Yummy flavors, too!

i like this Banana Blueberry Chiffon, i will try to do this weekend...thanks for the recipe...

Hi,HHB,
Your chiffon cake looks very yummy and can't wait to make one. Have made a Coffee Kahlua Chiffon cake over the weekend, definitely for coffee lover only.
Got a bit of advice for beating egg whites for chiffon cake, u need to beat (i use handheld mixer)egg white till it is standing peak(ie, the peak of the egg white doesn't flop when you lift the whisk up as if you are licking an ice cream, it will look very glossy and satiny ..), and at this stage when you turn the bowl around , the egg whites will not fall out of the bowl! Got to stop beating at this point otherwise it will separate.Once you are at ease with making chiffon cake, then there will be a great variety of flavour for you to explore.
Hope it helps.
Sem

Hi Sem, thanks so much for your valuable tips :) I did beat the egg whites till standing peak, and I even turned the bowl around. But I am still not very sure whether I was doing it right? I am just very terrified of beating egg whites!

Hi,HHB, all your chiffon cakes and sponge cakes look fine to me, so you must have done correctly then.I would recommend another chiffon cake recipe- Gula Melaka Chiffon Cake by Kevin Chai, I have tried it and it is very yummy and easy to make too.

Hi Sem, thanks for assuring me that I am doing fine :D

Hi HHB! I tried your recipe last weekend using the lemon marmalade jam and it was a succesful! The chiffon was very air and light and the taste was just right. Nw I have a good chiffon recipe using jams!

hi :) I tried baking this today but, I found the texture of a cake a bit too hard. Any tips on how I can improve? Should I have beat the egg whites for a longer time?

Hi Van, I'm sorry I am no expert in baking chiffon cakes. I am not sure what causes your cake to had a slightly hard texture? Do you suspect it is due to the egg whites? Did your cake rise up high, if yes, then maybe it is not due to the beating of the whites? It could also be due to the baking time, baking temperature, etc.

Hi Sue, I got it from Phoon Huat a couple of years ago, I don't think it is available now.

You are probably right that it's no longer available now. I checked with Phoon Huat, Sunlik and Ghim Hin Lee and found only 6" is available. Thanks for your prompt response.

Hi Happy Homebaker,
I have tried a couple of your recipes and they are really good. Thanks for sharing. You have a very nice written blog with lots of details, love reading your blog.
Have a question for you, i am trying to bake chiffon cake, but don't know where to get the rack to hold the cake when it is done and need to be inverted. Can you share how do you normally do it? Thks!

Hi CatLover, thanks for following the recipes I posted here :)
I don't use any special rack to hold the chiffon pan. As the height of the tube of my pan is quite tall, I simply leave it to stand inverted on the table. What I have read from chiffon cookbook is, you can invert the pan over a bottle, see here for illustration (http://www.flahertywines.com/chile/lemon-chiffon-cake/). Hope this helps.

hi HHB, would you be able to post up a video on the proper way of folding egg whites into thick batter? Mine didnt raise as nicely as it did like urs..highly suspected its due to my folding technique..I really have no clue on how "gentle" I should be with my folding! THanks:)

Hi HHB, my chiffon just came out of the oven..turned out as suspected- hard and raise at most only a third of the pan!~ Has everything a chiffon is not to be. Followed the recipe but duno what went wrong. Help~

Hi Anonymous, I am not able to post video on folding of whites, as I do not have extra pair of hands to take the video...but you should be able to find many demo videos on youtube. The finished batter should be thick and airy, not thin and runny, and it should fill 90% of the pan. Sorry, I am of not much help.