from Waves to Forest to Floral

It was a public holiday yesterday, and since the school's exams were over, we couldn't wait to start the ball rolling for our list of outings scheduled for the coming school vacation. Top on our list is the Southern Ridges...a 9-kilometre trail spanning from the Mount Faber, Telok Blangah Hill, Kent Ridge Park before ending at the West Coast Park. I knew I wouldn't have the stamina to complete the entire length of the trail so we only took part of it which links the Henderson Waves to the HortPark. 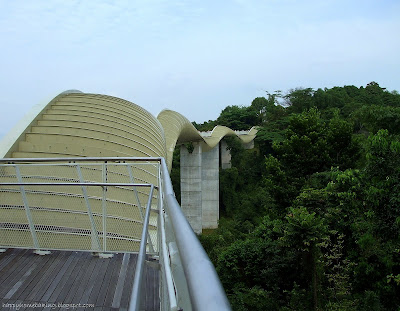 This photo was taken at the Henderson Waves...a pedestrian bridge that connects the Mount Faber and the Telok Blangah Hill. This unique structure got its name from a series of undulating 'waves' which are made of curved steel “ribs” that rise over and under its wooden deck. 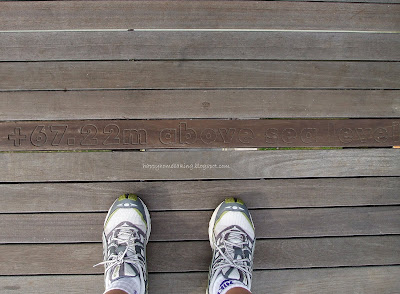 The bridge is 36 metres above Henderson Road and close to 70 metres above sea level, making it the highest pedestrian bridge in Singapore. 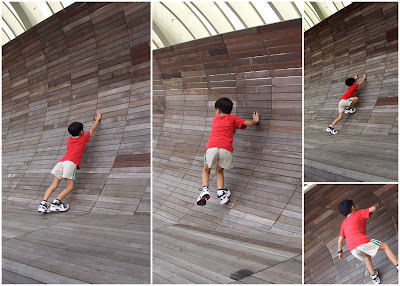 The seven 'waves' along the bridge are meant to be shelters...but many kids, including mine, turned it into a slide instead. They had fun climbing up and sliding down the waves. I was expecting to spend a quite morning getting close to the nature, but to my greatest surprise, the place was flooded with throngs of enthusiastic crowds like us. It was as if we were walking along busy Orchard Road!

After the Henderson Waves, we continued our journey to the Forest Walk...which was indeed a very easy walk (if not for the crowd) along an elevated walkway through the forest of Telok Blangah Hill which was not accessable in the past. 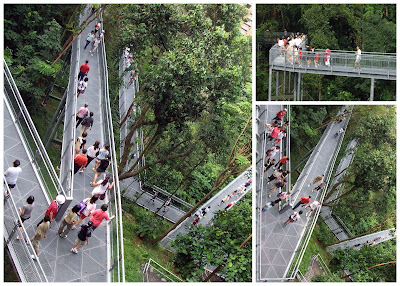 Due to the never-ending stream of crowd and the narrow walkways, we hurried along the major part of this trail...stopping only occasionally to admire some creepy crawlies along the way. 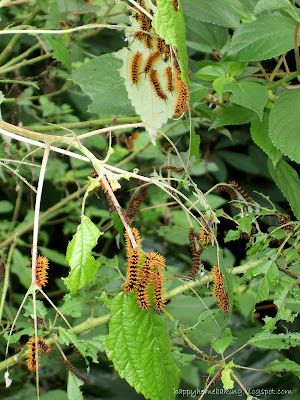 In no time, we arrived at the next landmark, the Alexandra Arch...yet another bridge...in the form of an open leaf that spans across Alexandra Road and connects to HortPark. 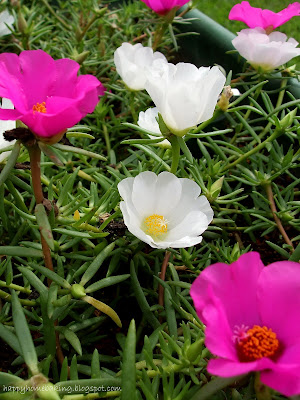 I would consider the HortPark as the 'jewel-on-the-crown' of our trip yesterday. We were greeted with vast open spaces and many lovely flowers and plants in this huge gardening hub. I was delighted to spot this planter box of portulaca...a stunning flowering plant which I have tried keeping as a container plant several years ago. I love the bright fuchsia flowers, and the white ones looked so pretty too. 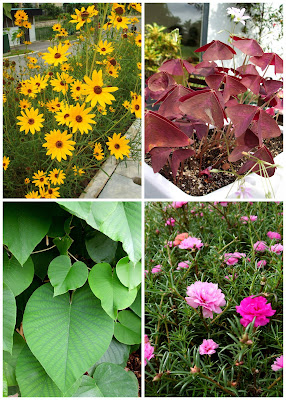 There are many types of flowering plants in the garden, I have only posted those that are less commonly seen on the roadsides...a climber plant with huge heart-shaped leaves (the same one we saw at the Children's Garden), bright yellow daisies, more portulaca with ruffled double petals...just to name a few. There were several greenhouses in the park, too bad they are not opened to the public, so, I could only admire the beautiful flowers through the glass panels:( 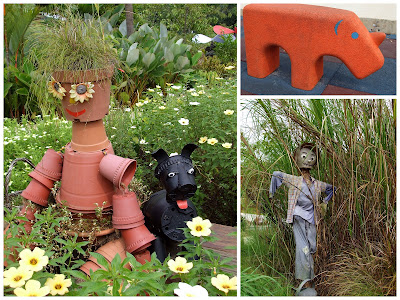 Besides a few playgrounds catering to the forever energetic kids, there are also many outdoor display plots showcasing gardening concepts and designs...a great place for gardening enthusiasts. 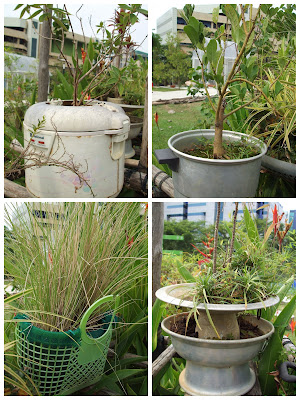 Look at the clever use of old and unwanted kitchen utensils...I never know that a steamboat can be transformed into a flower pot...and look at that rice cooker, wok and frying pan! 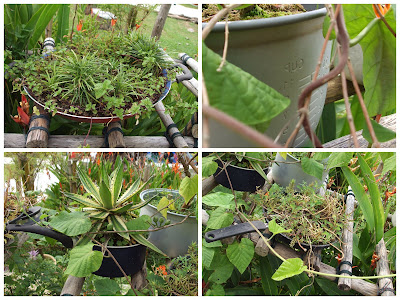 It certainly gives me a fresh perspective to container gardening :) 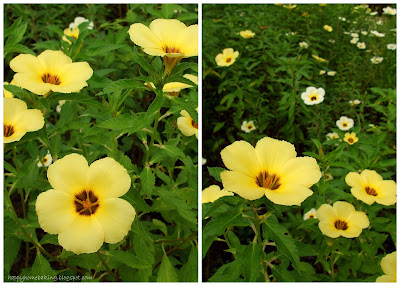 It was a wonderful morning, we had a great time, and that was despite the heat and humidity. Even though I spent the rest of the afternoon resting my sore limbs (in bed!) I have already made plans for us to cover the rest of the trail soon.

Email ThisBlogThis!Share to TwitterShare to FacebookShare to Pinterest
Labels: Others

looked around for ur email but couldn't find it so hav to leave you a comment. i've tried making the everyday bread from your blog for twice but somehow, the end result was a very dry and coarse loaf. i did follow the recipe accordingly, gave it a good knead and it proof fine. but then my loaf just wasn't as beautiful as yours.worse is after the bread cools down, it turns stale and even more coarser immediately!

really very sad... really appreciate it if you can post up something like a tutorial for all amateur bakers like me? btw, i do not own a bread maker so everything is hand made =)

I really didnt know Singapore had such warm beautiful parks .. only know it has loads of good shopping malls ... hehehe.

chanced upon your blog and i am very impressed with your baking talents! Will definitely drop by very often from now.

Fong
(a working mum, who loves to cook and bake)

Oh ... your adventure looked really fun! ... now I'm extra bummed we didn't make time to explore this "hike" when we were in Singapore in Sep. My uncle raved about it, but we just ran out of time. Will have to check it out next time. Do post more pictures when you return to complete the hike.
-v

Thanks for another good outing place for my kids during the holiday. BTW, is it convenient place to move about with the pram for I thought of bringing my 16 months old toddler. And is the playground appropriate for kids for that age. Thanks.

Hi Auntie (hope you don't mind me addressing you this way),

Was the weather really warm? I've been begging my mum to bring me there but uhm we're afraid of getting tanned (such vainpots we are, tsk tsk)!

I've always wanted to go to HortPark, but never got around to going. Your photos are definitely enticing! I should try the Henderson bridge too! Come to think of it, they really look like slides :P

Hi Katherine, I suspect it could due to your kneading. Did you knead till the dough was fully developed? That is, it became smooth, and elastic (wont tear off easily if you stretch it)? It usually take me about 30mins of continuous kneading if I were to make bread by hand.
As much as I would like to share my experiences with my readers, I am afraid I am not qualified to post a tutorial as I am also a novice. I have not attended any courses so I don't think I can in any position to do that as I am still learning. Having said that, I have posted some step-by-step photos under the post "Matcha Red Bean Loaf", hope you will find it useful.

Fong, Thanks for dropping by :)

Hi V, what a pity, I hope you can visit these places on your next visits.

Hi JT, yes the major part of the walk is accessible by pram, I saw many parents pushing the prams. There are about 3 playgrounds at the HortPark, one of them is suitable for small kids. You can get further details from the National Park Board website.

Hi Jermaine, if you are only seven years old then I wont mind you calling me Auntie, haha, nah, just kidding! I won't expect you to call me 姐姐 ;)
It depends on the weather...it was not that hot when we were there, either you go early in the morning or go in the evening. I read that the Henderson Waves is beautifully lighted-up at night.

Hi Ovenhaven, if you like flowers, do visit the HortPark, you can even do a picnic there :)

thanks for the reply! yea i think could be due to kneading coz normally i stop kneading when i think the dough looks okay already. everything came together but definitely not smooth and elastic as what you've mentioned. shall give it a try again tomorrow! =)

btw, i saw alot of bakers include you and E'joie using this bread making book called something like '孟老师' 100 ways of making bread. is it good? heh so far i only got one by alex goh.

Hi Katherine, looks like you did not knead the dough well enough. For most of the asian kind of soft bread, you will need to knead it for at least 15~30mins, as the doughs are most of the time quite wet and sticky.
I borrowed that book from the library and it came with a CD, it's quite a good book. I find it useful as the recipes are mostly meant for smaller loaf size, good for small families like us, we can finish it within 1 ~ 2 days, as homemade bread don't keep well.

yea gotta agree they dont keep well. what my mom did was to freeze some of the bread i made in the freezer and when we finish those that were outside,we will toast up those in the freezer and make them into french toast. but still home made bread and definitely better than store bought ones. thanks hhb you had been really very helpful! btw, the honey buns looks great too! will definitely post bout my 3rd attempt for everyday bread making =)