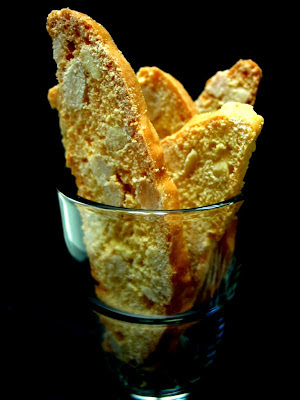 My first encounter with biscotti was dated several years back. It has been a while since I last had biscotti. To quell my cravings for these Italian cookies, I tried making a batch based on Audrey Tan's book, LUST - for love of chocolate.

Since it was my first attempt in making biscotti, I didn't expect the dough to be so sticky and wet. After mixing the ingredients to form a super sticky mess, I left it in the fridge to chill for 1 to 2 hrs, according to the recipe. While waiting for the dough to chill, I started searching on the internet to see whether I was on the right track. It eased my mind a little, after reading a few blog postings that the biscotti doughs are usually quite sticky.

I followed one of the tips from a flogger, ie, to use a pair of damp hands to shape the dough into a log as opposite to 'floured hands' as recommended in the recipe. Apparently, the dough didn't stick as much if your hands are slightly wet and damp. Yet, I still wasted some cling wraps, a plastic sheet and two sheets of parchment papers during the entire process. Yes, the dough stuck onto parchment papers like super glue! I had to use a spatula to scrape off as much dough as possible from the parchment sheets.

Fortunately, the energy that went into wrestling with the sticky dough was not wasted as the biscotti tasted great...very crisp and crunchy. The kids, especially the younger one, love the cookies to bits...and I mean literally...he salvaged whatever crumbly bits that he left on the table ;)

I didn't coat the biscotti with melted chocolate as I realised that I've cut them way too thin (the recipe says to slice into 0.3cm slices). These are definitely not the kind of biscotti that I was craving for. If I were to make this again, I am gonna slice them into thick, fat fingers. On the other hand, the thin slices meant that the kids could enjoy the cookies without dipping them into any beverages. I'll certainly try make another batch using another recipe real soon!

These are perfect looking biscotti's and you've captured it beautifully :)

Hi Anne, thanks :D
I was just experimenting with this shot...I used a black paper bag as background...which my boy is currently using to carry his school files ;)

Love biscottis, and nice shot! When I make biscotti, I simply use spatula to drop the dough onto the parchment and form a log from there. Wet fingers are definitely the way to go. :)

All I need to accompany this is a perfect espresso!

I love your this shot. Izzit taken at black background or what ?

hi Mandy, thanks so much for the tip :) I'm sure it will come handy when I bake biscotti again the next time!

Anh, I had them with a cup of coffee shop coffee, and it tasted great too =)

Sue Sue, yes, I took this shot by placing the glass of biscotti in front of a black paper bag ;)

I have never had biscotti!! Can you believe it, sweetie?

I wish I could try these - they look fabulous!

Pat, oh really?! do try make a batch...it's actually quite easy, if not for the stickness!