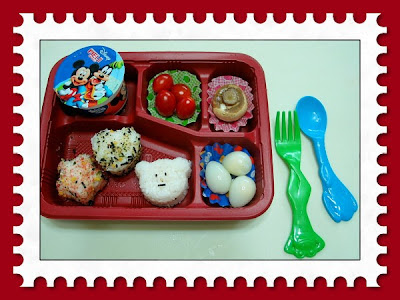 This is my first attempt to assemble one. I have not thought of making a bento for them until I came across a fellow flickr pal's beautiful bento sets she made for her husband.

Was indeed very pleased that I could finally use those cute paper liners which I bought from Daiso many months ago.I don't have a proper lunch box at home (my boy seldom pack any food to school), but I managed to dig out some disposable food trays from my cupboard full of disposal containers;) 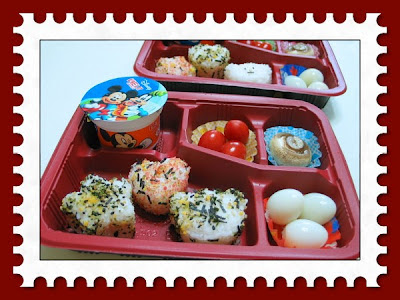 I made the rice balls with the help of a rice mould which I use occasionally...the mould is a 3-in-1, that comes in 3 different shapes. The rice balls were filled in the middle with salmon flakes...by toasting some fresh salmons...seasoned with only a tiny pinch of salt & pepper in the oven. The rice balls were then sprinkled with different flavors of furukake (rice seasoning). I also toasted some fresh button mushrooms in the oven. The mushrooms didn't require any seasonings as they tasted very sweet just on their own. Filled up the other compartments with cherry tomatoes and some hard boiled quail eggs. A little tub of yogurt completed the set.

My boys were so pleased to see their colourful set lunch when they came home from school. It's definitely a nice change from our usual porridge, noodle soups meals.

Wow! Can I be your kid for a day ; ) ha ha
The bento set looks really good. Where did u get the rice moulds? Did you use japanese rice?

Your kids are so blessed to have you as their mum. Always so creative in your thinking and coming up with so many ways to spice up their lives. :) I really gotta learn a few tricks or two from you! And yes, NZ is a nice place to raise up kids but I think Singapore isn't so bad either! In fact, I might migrate to Singapore next time just so my twins will get to learn some Chinese and not be a banana like me! :P

U are a very energetic and creative mother!!! Lucky kids!!!! BTW, where's my share of the lunch box???? Hahahahah...

Sandy, sure, can make one set for u, but only self-collect ;p I used Jap rice...long grain rice will not stick together nicely. I got the rice mould a few years back...maybe from NTUC? You can get from Daiso...but I've only seen those that come in triangles and long round shapes.

hi Zoe, no, I am the blessed one to have both of them :) I actually enjoyed doing this kind of things...and they have their fair share of boring stuff for many many months.

hey vb, I am far from energetic! Just that I spend most of my time on my hobbies than taking care of the household chores, haha!

Thank you so so much for commenting on my blog! I used the receipe from yours! I was inspired by your cake and then changed it just a bit to make it suite my friend (the birthday girl). Thanks for all the inspiration!

hi autumn, thanks! How nice of you to bake a cake for your friend! Your friend is so lucky =)

Your bento set is so lovely and I bet your kids love it so much. Love all your baking.

So cute and looks delicious too! No wonder your boys were so pleased =) And thank you for linking to my bento photos!! (*^_^*) I feel honoured!

Was wondering how u manage to cut the seaweed to make the mouth and eyes. (:

Hi Shuying, I didn't cut from seaweed, the eyes were black sesame seeds while the mouth was a tiny flake of seaweed from the furukake sprinkle :)

And i thought u cut from seaweed. =p So furukake sprinkle is tiny flakes of seaweed?

Love your blog and the photography. May I ask where did you get these containers from? Do they come with a lid? TIA!

Hi Rosyln, you can get this kind of containers from SKP, a company that sells partyware, plastic bags and office supplies. There are many outlets, you can visit their website at: http://www.skp.com.sg.
and yes, it came with a lid, hope this helps :)

Thanks for the info! Alamak! Should have chanced upon your blog when I was in Singapore 2 months ago. Now, can only see, cannot buy.

Where did you buy the Japanese rice ? What brand and also is it the same as cooking normal rice ?

Hi Anonymous, I get Japanese rice from cold storage or ntuc, I use either 松鹤 (Shokaku) brand or Kokuho brand. It comes in 2.5kg packs. It is the same as cooking normal rice. Although some brands will require more water...just refer to the instructions on the package.