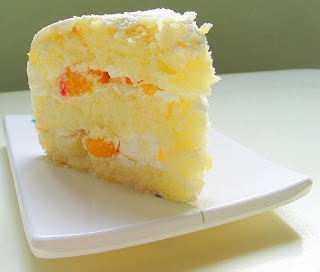 As I had some left over whipping cream, I decided to have another go on a layer cake. I made this Mixed Fruits Sponge Cake with the same recipe as that of the strawberry sponge cake which I did last week. 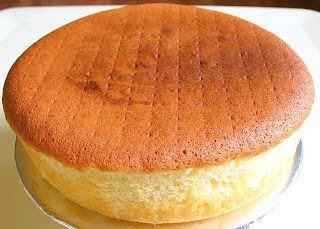 I am proud to say, this sponge cake was baked to almost close to perfection (in my own opinion, of course!) The top was not burnt as I baked it on a lower rack position this time. I also used less sugar, only 165g as compared to the 206g stated in the recipe. However, it still took another 10mins more for the cake to be done. The recipe stated that the baking time should be around 35mins. My oven always seems to take at least another 5 to 10 mins longer for most of my bakes :(

After the cake was ready, I let it cool in the pan for around 5mins. Then, I unmould it and let it cool Inverted. That is, the cake was placed on the cooling rack with the bottom side up. I couldn't recall where I have read it...but it was mentioned in some cookbooks that the cake should be let cool inverted so that a slightly domed top could be flattened, and the final cake will be very even and nice. True enough, the cake looked great when I flipped it over :))

I sliced the cakes into 3 layers and filled with whipped cream and canned mixed fruits. Everything went well until I was ready to cover the exterior with cream...I realised that I didn't have enough whipping cream to frost the entire cake! I was thinking whether I should go get some more whipping cream from the supermart...but my elder boy told me not to bother. He told me as long as the cake tastes good, why bother about the appearance. Well, after giving it some thots, I kind of agree with what he said, and left the cake as it is...with only a thin layer of frosting on the exterior. Luckily, the taste and texture of the cake didn't disappoint us...it was light, soft and not too sweet :p 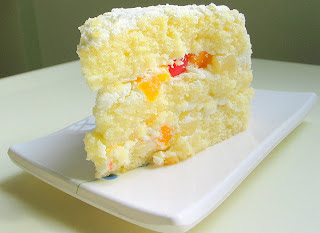 Oh ... yours look sooo much better than mine! And I think taste will be better than my mango mousse cake, imagine the layer of cream *envy*. And you get such a perfect top, I used PH super sponge cake mix but I din manage to get a golden brown like that and probably I din beat enough so the cake din hv that height too.

It's just so presentable! So wat are u going to attempt next? :)

Hi Elyn, I have not tried making sponge cake with PH's cake mix yet. It's quite easy to make the sponge cake from the recipe...just need to ensure you beat the eggs & sugar to ribbon like and fold in the flour and oil gently.
I am thinking of making a charlotte cake for my next little project. I find it a very pretty and elegant cake. I've yet to find the ready-made sponge fingers though...the one I saw at carrefour is too big a pack for me...we won't be able to finish it...unless I want to make like 4 charlotte cakes in a row, haha!

Do you mean those sponge fingers used in Tiramisu? Check them out at NTUC, the brand I use is something start with Vicenzi, about 20 fingers per pack.

Have not seen that cake before, how does it look like?

Elyn, yes I was referring to those sponge fingers used in Tiramisu. Thanks for the info. I've dropped you an email on the charlotte cake.

hi, may i know at which store/which part of Mustafa's can i find "Hershey's Mint Chocolate Chip"?

Hi Wanching, thanks for dropping by :)
You can get the mint chocolate chip at Mustafa's supermart level(sorry, I can't remember which level)...you can find it at the baking supplies section. It's also available at Sheng Shiong supermarts...hope this helps.

this sponge looks great..im trying it out now.. i hope its the type i wanted..
thanx a lot

Hi karlsfoodie, thanks for dropping by! I visited your blog, your cakes and bakes look so delicious!
Hope this is the sponge cake you are looking :))

I loved this tip on inverting the
cake for it to cool down.

Oh, and I had a similar problem with my oven a while ago. I bought an oven thermometer and with it I noticed my oven wasn't very sharp at temperatures. The technician came to my house and after that, no more problems with my baked goods!

Thanks for your compliment!
I also suspect that my oven temperature is not accurate...I'll check when I get an oven thermometer, thanks!

unfortunately it did not turn out right for me.. was rather heavy n rough... urs looks really good
i will try again =)

Hi Karlsfoodie,
Did you beat the sugar and eggs till ribbon like stage? This step is critical to get the sponge cake right...as it doesn't use any other leavening agents such as baking powder. The egg mixture has to be beaten until pale-like, and you could feel that it has become thicken. The folding in of the flour is also important...the folding in has to be very gentle in order not to deflate the volume of the egg mixture. Hope you get it right the next time. Cheers!

What a beautiful looking sponge! I suddenly feel hungry...

Your sponge look so soft. Can you tell me how do you cut your sponge horizontally? Do you use a equipment?

Hi Shirley, thanks for your compliments :) I used a long serrated bread knife to layer it.

May I know what equipment do you use in frosting a cake. I recently bought a cake ring which i find it very useful. I was wondering should i get a turntable. what else do i require?

Hi Shirley, I have a palette knife which I bought from Daiso for frosting. Some piping tips and disposable piping bags. I have also gotten a decorating 'scrapper' (I do not know what to call it?) from Daiso which you can make some patterns on the frosted cake. But I do not have the skills to use it! I do not have a turntable or a cake ring, and I use a serrated bread knife to layer the cake (also from Daiso). Hope this helps :)

Looks like I have to do some shopping at Daiso.

looks yummy! will have to try this soon :D

would like to link you if you dont mind!

I want to make a chocolate layer cake, so how much cocoa powder should I add?

Hi, I am sorry, I have not tried turning it to a chocolate sponge cake, I am not able to comment on this.

hi,if reduce the amount of sugar for the recipe will it be influence?i always beat til the egg lift up d trail abit wont dissapear,isit overbeat it?if the egg beat too stiff not wil be more stable?for the mixing bowl,use deep bowl isit ok?

Hi, I didnt have problem with it. No, I don't think you over beat the batter. I am no professional baker, every thing is self taught, but I have read that over beating the batter wouldnt make the cake more stable. Yes, do use a deep mixing bowl for easy folding. Hope this helps :)