Happy Lunar New Year to everyone!

Pardon my tardiness in updating my blog and thousand apologies especially to those who still hop over to this tiny blogosphere once in a while.

I do bake regularly but I am always going back to my favourite recipes such as pandan chiffon, the usual bread loaves and buns, simple muffins and cookies. Nothing inspiring or worth mentioning... 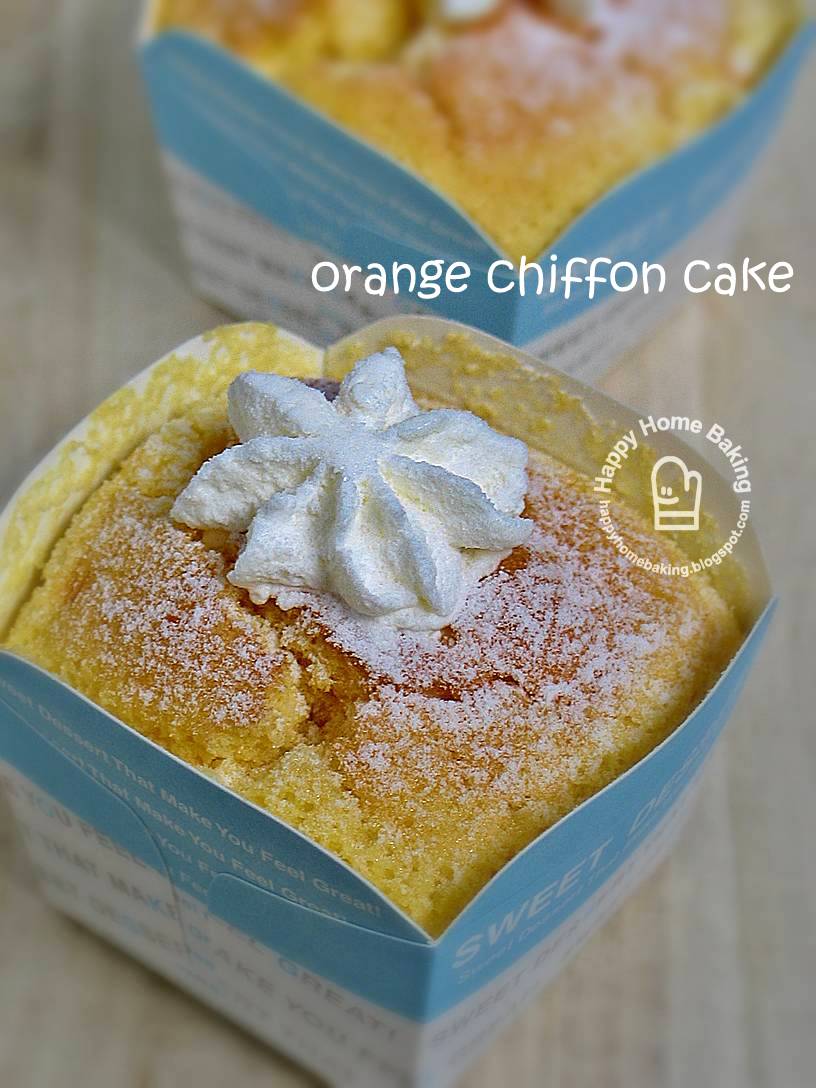 except for this latest Orange Chiffon cake which I baked in paper cups instead of the usual tube pan. I have meant to give the cake away, and what better way to present the cake using these lovely muffin cups :) 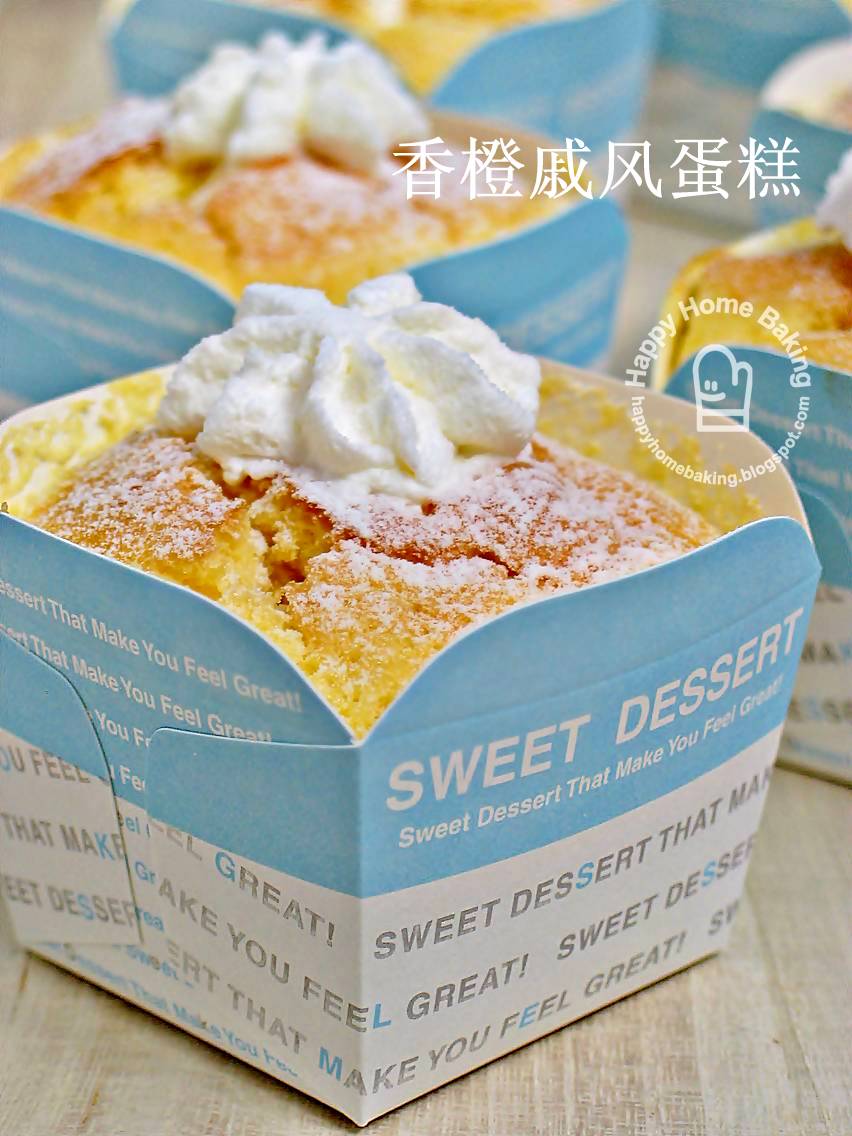 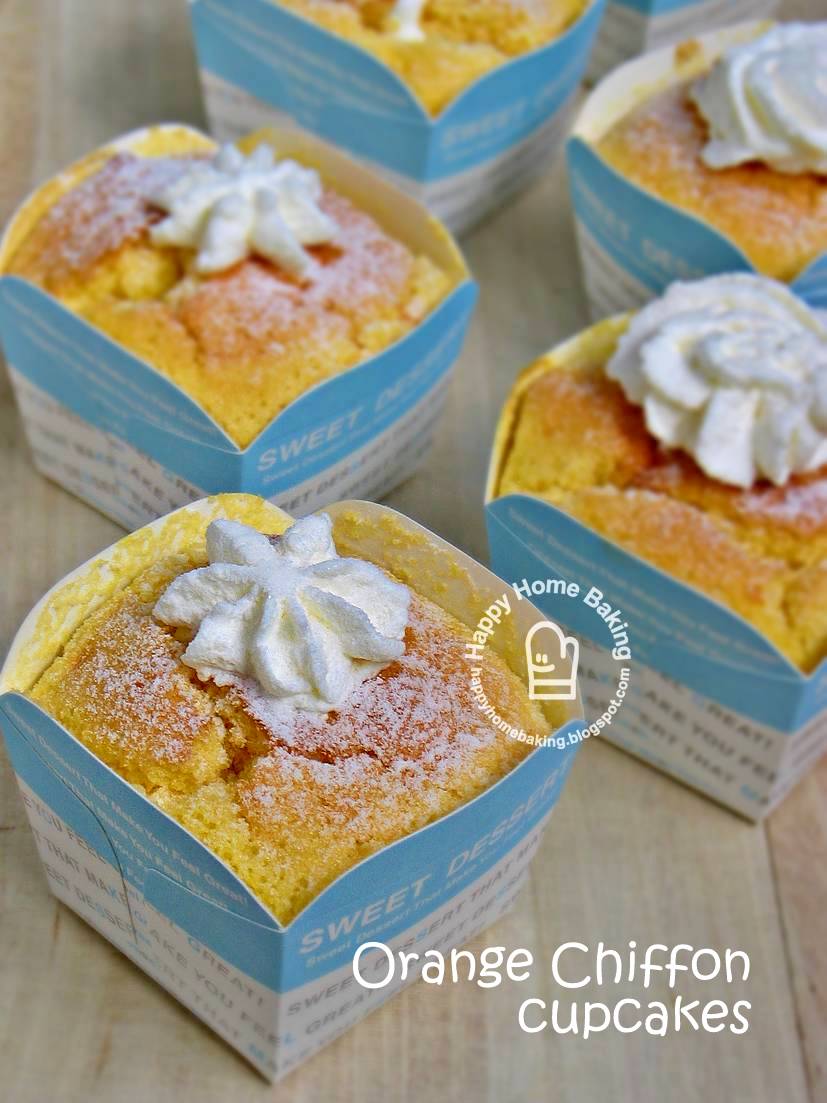 I piped whipping cream into each cup cakes. just so to start using the carton of non-dairy whipping cream I bought a month ago. The end result looks quite similar to the popular Hokkaido chiffon cake though. 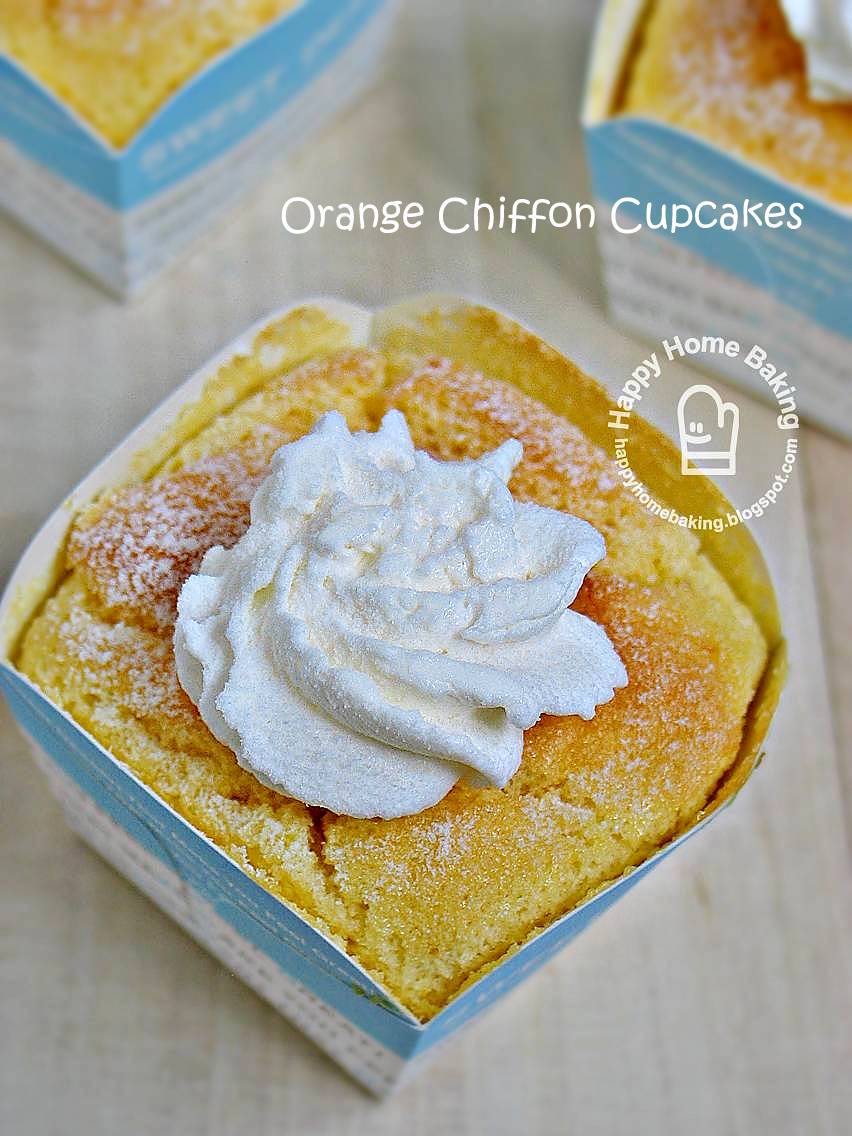 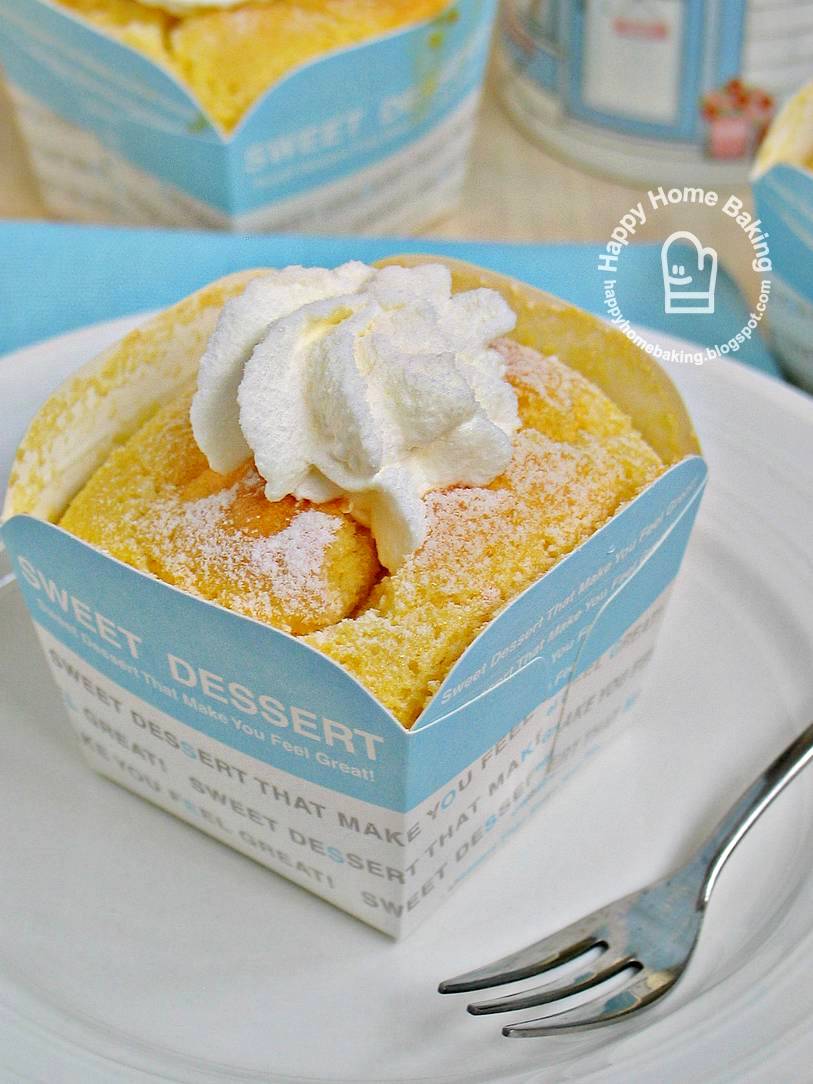 The chiffon cake texture was soft and light although they were baked in paper cups. While baking in the oven, they rose beautifully over the rim, almost on the verge of overflowing. Most of them cracked...but I have no issues with cracked chiffon cakes, in fact I love the cracks ;)

Once out of the oven, they started to shrink, I didn't invert the cakes (or should I??) and left them to cool right side up. Very soon, the cakes deflated to just the right height...not falling short of the base of the four flaps on each square cup. It was my first attempt at piping cream into a cup cake. I have no idea how to go about it but to rely on my gut feel. I simply forced the piping tip into the centre of the cake and squeeze in as much cream I could, I stopped piping when the cream started flowing out from the side of the piping tip. I used the remaining cream to pipe rosettes on the tops, so as to cover the holes. I kept my fingers crossed that I was doing the right thing...that I got enough whipping cream into the cake. Fortunately, these little cuppies were meant for family, I have no qualms about giving away half-filled cakes to family members, actually I didn't even taste one before I gave them away, something I wouldn't do if they were meant for friends ;) 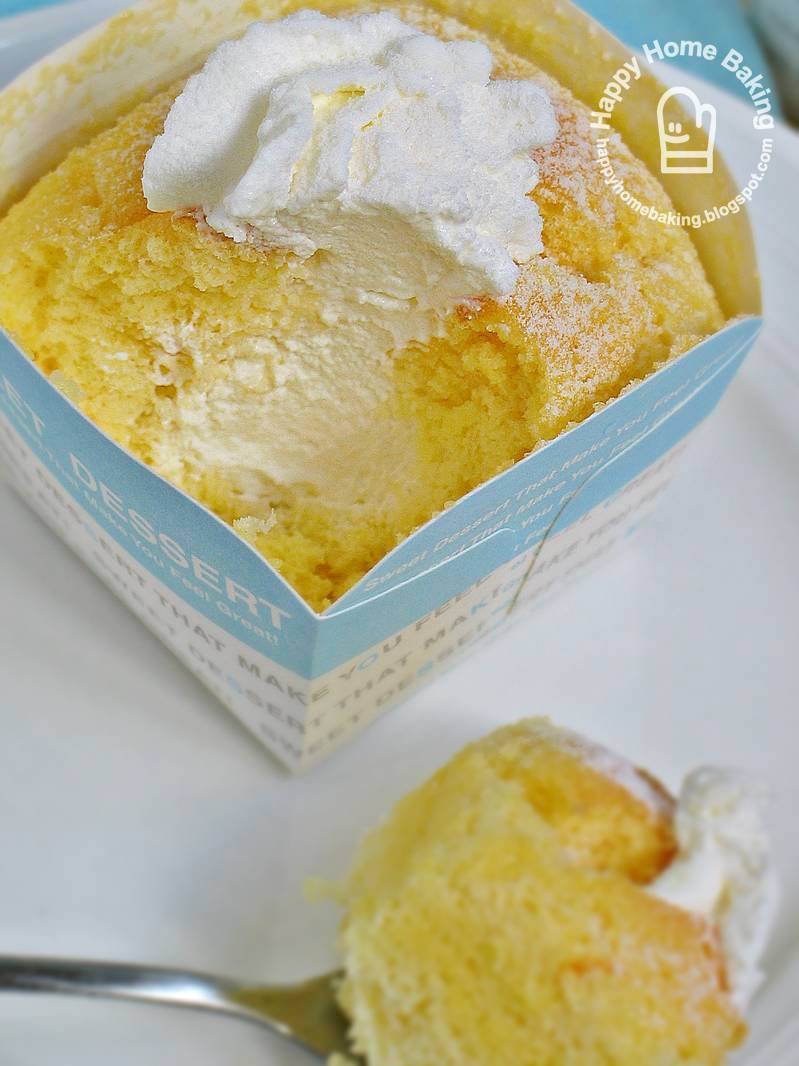 It turn out that I got the piping right as the cuppies were filled with quite a substantial amount of cream, although I think the cakes could take in more. The taste, at least the whipping cream, was rather close to those store bought Hokkaido cake which I have tried. I received positive comments such as...'they taste better than store bought ones'. Credit must go to the orange chiffon cake recipe which I have taken from my favourite chiffon cake book, 好吃戚风蛋糕轻松上手. The cake was delicious and full of flavors as they were made with orange juice, orange zest and Cointreau (an orange-flavoured liqueur)...another baking ingredients which I have just used even though I bought it more than a year ago.

With this little experience I have gained, I expect myself to bake some real Hokkiado chiffon cupcakes soon...

Wow I didn't think a cake could take in so much cream. The chiffon looks beautiful dusted with icing sugar.

By the way, where did you buy such pretty paper cups?

Where do you get your cointreau? Are there any particular brands good for this recipe? :)

Hi Joey, I got the paper cups from Phoon Huat.

Hi, I got the Cointreau when I went overseas. It is actually a brand of a type of orange liquor, see here (http://en.wikipedia.org/wiki/Cointreau). You can get it from Changi airport duty free shop which is cheaper than if you were to get if from local supermart. Hope this helps.

Hi, HHB, when I first learned chiffon, I baked them in the these paper cups as I didn't have a chiffon pan at that time and I also like the end result. My successful rate in baking chiffon is like 80% niak, haha! I like the flavour of this chiffon cake! Gong Xi Fatt Cai!

This is lovely. It doesn't look any different from hokkaido cupcakes though. Wish I were there to try these,

Hi HHB, I love what you have done to your chiffon cakes, I will try baking my next chiffon in paper cups too!

HELLO! glad to see a new post after many disappointed visits. *^^* HAPPY NEW YEAR AND THOSE LOOK DELICIOUS.

Hi HHB, without inverting the cupcakes after baking will it shrink alot? Tried baking chiffon in cup casings but wasn't satisfied with the results.

Thanks to this great concoction. I simply got there that's why sampled terrific: -) Excellent web page by means of torte directions other people when you're planning to pursue. I have a blog with cake recipes myself if you are interested. You can find it at http://recipes-for-food.com/

Hi Kimmy, during baking, the cake rose over the rim of paper cups, but upon cooling, it sank to just below the base of the flaps, I think it is quite normal as my chiffon cake in pan also usually shrink until just below the rim of the tube pan. btw, I just read from a cookbook, if u are using this similar square cup, fold the flaps down a little before filling it with the batter, this way, when the cake cools off, the flaps will prevent the cake from sinking too much. will test it out to see whether it works.

It certainly look like Hokkiado chiffon cupcakes. MY chiffon tin has been sitting in the dark corner...still cannot summon the courage to try beating yolk and white separately .. haiz.... Looks very tasty .. can imagine the orange fragrance in the house when the cakes are baking.

Hi HHB, is it possible to pipe in the cream without using a nozzle?

Hi, I am not sure...but I think it will be difficult to pipe as you need the piping tip to push it inside the cake. Without a tip, maybe you can try make a small hole in the cake and try piping in the cream.

Hi HHB, will like to ask can i use self-raising flour instead of cake flour to make chiffon cake? =P

Hi, self raising flour contains baking powder, whereas cake flour does not. For this chiffon cake recipe, it is not necessary to use baking powder.

I wan to try baking tis weekend. Can I go w/o the orange liquor or is there any substitute? Coz it's meant for kids.

hi, other than using Cointreau, can we substitute with any other non-alcohol, such as juice?

Hi Amy, yes, you can replace it with same amount of orange juice. Hope this helps :)

Did you youse top and bottom heat to bake this cake? Or just bottom heat?
Thank You