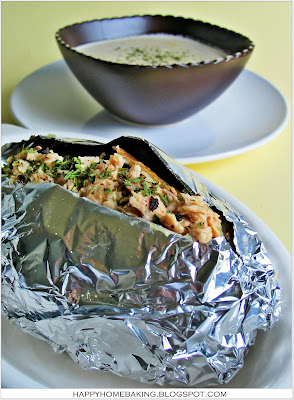 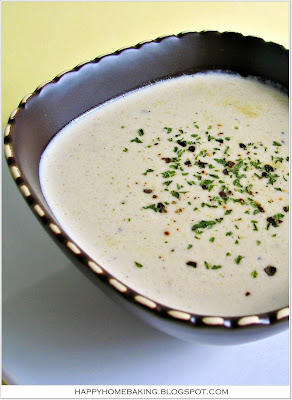 It was my maiden attempt at making creamy soup. I have always wanted to make cream of mushroom soup but most recipes would call for an electric food pureer, be it a food processor, a handheld pureer or a blender. I do not own any of these kitchen gadgets, and I don't have any intention to get any of them as I know I would probably use them once in a while. A couple of months ago, I borrowed a blender (on a long-term loan basis) so that I could make smoothies for the kids. It didn't occur to me until much later that I could actually use it to make creamy homemade soup. 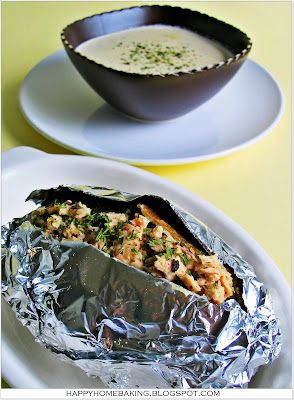 To cut down on baking time, I boiled the Russet potatoes until they were fork-tender before wrapping them up with foil and baked in the oven for another 10 mins or so. I served the baked potatoes with some butter and tuna flakes sprinkled with black peppers and dried parsley. 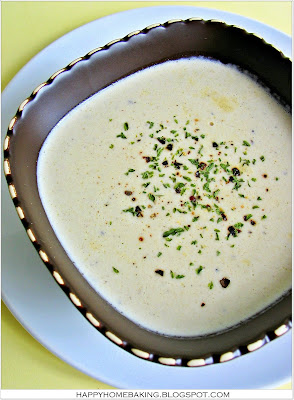 This soup was also a short-cut version! I simply stir-fried some garlic and fresh button mushrooms with some salt and black pepper, then add cream and water and cooked the mixture for about 20mins. The mixture was then pureed in the blender before returning to the pot to bring it back to a boil. The consistency was not as thick as I would like, so I added in two slices of Emmental sandwich cheese...which was what I had in the fridge. It tasted good! The next time I were to make this again, I would have to use more mushrooms; and probably make some crusty buns to go with it. It was indeed a hearty lunch, most importantly, my kids enjoyed this simple meal as much as I did.

WOW this looks yummy. I also used to boil the potatoes, the method same as yours.

Thanks for sharing your trial on the mushroom soup, nephew took a liking on this kinda cream soup recently but I try to avoid giving him can ones so this is a good chance to give this a try! The cream you mention is which type?


Just my two cents since I'm a student and quick, fulfilling meal is always a must,

Next time try adding a tablespoon or two of plain flour into the stir fried mushroom and mix into submission. Then only add in the chicken broth/water and bring to boil. It will thicken up.

Just turn heat off and cool it down a bit and puree it to your consistency. I usually leave half out unpureed cuz I like the chunky bites.

I'll then pour the soup back into the pot and bring it to boil again. Add in the cream now and turn heat off when cream is all warmed through.

A bay leaf added alongside the chicken broth/water also makes a whole lot of difference.

Do try it if you were to remake it!

hmm..very yummy indeed...but I do not have a plender.. so I could only look and virtually 'drink' it

Those are my favorite foods and you made it look so yummy! The lunch must be full of joy with these yummy soup and bake potato. I couldn't imagine how nice the food would be in the dinner :P

Good try HHB. Try using stock instead of water. I was taught to toast garlic and mushrooms too, but of course, have not tried :P As for electric gadgets, you are so right, use once in a blue moon and they take up so much space! :P

Hi HHB,
I wrote some comments yesterday and my connection died on me! *sob* Not to disappoint myself, I had to re-write now.
What Quinn quoted was what I did last time. The recipe I used was from "Prepared Pantry".
Another way was to grind some uncook white rice or uncook brown rice and throw it into the soup to thicken it. I learn it from one of the chefs though.
Anyway, cream of mushrooms is my favourite soup. You've managed to done it so yummy! Yum yum. Lucky boys you have!

Wow, I like baked potato esp serviing with bacon.

Hi HHB, loved this place as its my first time here. U rock! :)

Just want to ask, how many grams of shortening to replace 250grams of butter?

I love baked potatoes, and yours look really good! I never thought of boiling the potatoes first to cut down baking time. Thanks for the tip!

Thanks Quinn for your very useful tips :D

Yuri, I am so lazy to make stock, so I use water ;p

Thanks Jane for taking the trouble to retype your comments! I didn't know that rice can help to thicken soup! But I doubt I will be able to try this as I dont have a grinder ;')

Hi Cook.Bake.Love, yes I have tried with bacon...it's delicious!

Hi Anonymous, I am sorry I do not know how much to replace. It depends on the recipe, and some recipes specifically requires shortening (eg Chinese dim sum pastries), and it won't be advisable to replace it with butter. Sorry I am not of much help here.

Hmmm, this would be lovely now as it's wintery and cold today in Perth! Jacket potatoes are a huge hit with my kids as well!

I love your blog!!! your baking recipes are delicious. I gave you an award on my blog, go and snatch it.
http://rkitchen.blogspot.com
enjoy!

The bake potato is my favourite and the soup is my kids' favourite. If only my kids and me are your kids too.

Can I have the mushroom soup recipe ?

Hi Anonymous, I am sorry I didn't follow any specific recipe, so I am not able to share it.