My elder son can swim far better than his brother, but when it comes to running, he is not better off than me. He went for his 'long-distance' run early this morning. It was part of his school's annual physical fitness test. Although it was only 1.6 km, to him, who has got a pair of elephant's legs, is almost equivalent to a mini-marathon ;)

In order to give him an extra boost of energy, I made something with banana for his breakfast today. 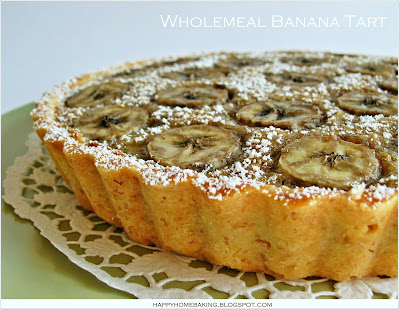 I have planned to make a banana tart using the same old Peach Tart recipe. However, when I was gathering the necessary ingredients, I realised that I have ran out of ground almond. I was not prepared to get out of the house to buy a pack of ground almond, and neither was I keen to bake a banana cake. So I looked around for a suitable substitute...and when I spotted the pack of wholemeal flour, I knew instantly that my problem was solved. 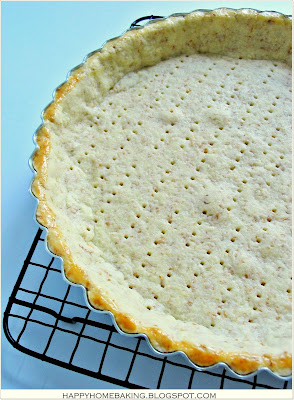 I was a little hesitant to use the wholemeal flour for the pastry base, my main concern was whether the pastry would be able to form a dough or hold it's shape. But I went ahead and gave it a go. Lady Luck was with me, the pastry dough was not very much different from the usual ones using ground almond. I was also surprised that even without the almond, the finished tart shell was emitting a nice buttery aroma when it was cooling on the rack. 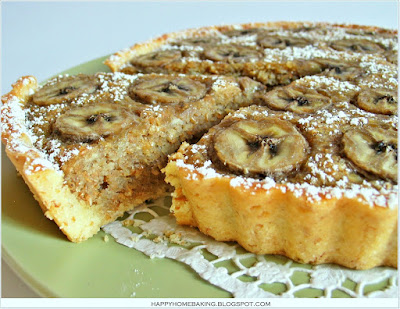 This Wholemeal Banana Tart is not as pleasing to the eyes as compared to the lovely Peach Tart. The banana slices turned black upon baking, no amount of icing sugar could cover up the undesired appearance :'( 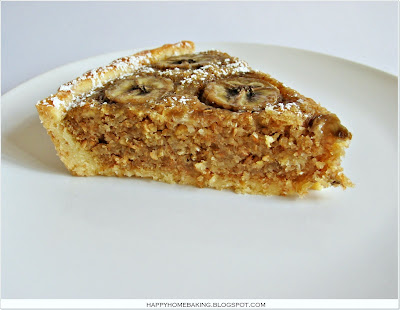 Nevertheless, it smells and tastes really really delicious. I love the nutty texture of wholemeal flour, although the filling was slightly sweet due to the generous amount of bananas I have added to the filling. My kids have no complaints though. The tart shell was crisp on the day it was baked, sadly, it softened when left over night, I wonder whether the mashed banana was the main culprit?

My boy clocked in 10min 4sec for his run which is 1.5mins faster than his usual timing. No, I won't attribute it to this tart, I think it was his determination and the set of goals that he had set that made him pushed himself to his limit. It is my wish to see him having the same zeal in everything he does.

What a yummy looking tart! Your son can run even faster than me...hahaha. Love the new blog header HHB!

I read from Agnes Chang Cookbook, a post on banana loaf bread cake, she used 1/2 lime to 2 bananas.

She sliced the bananas and squeeze lime juice to evenly soak them in and use them to scatter on top of the loaf cake.

The end result did not turn black. It was still very yellowy. I hope you will try this simple trick the next time you bake something with bananas. Lemon juice will work too. I used those bottled lemon juice and it was also alright.

Hi Ellena, I hope you will like this tart :)

Hi Quinn, thanks for the tip! Oh yes, I am aware about adding lemon juice to prevent bananas from browning, but somehow I forgot about it until you mention it. Thanks for reminding me, will try it next time :D

Hi Charmine, thanks for your comments ;')

I think adding the wholemeal flour is a good choice. You're really smart! It had given the tart extra nutrition! Fantastic!

what a coincidence! my eldest also went for his 1.6km run on 23 may very early in the morning! he was at toa payoh stadium. what about your son? if he also did his run there, they may be from the same school:) and another coincidence, i also made a tart on friday for breakfast on saturday. but i didn't use your peach tart recipe because i couldn't afford spending too much time. the difference is, i didn't let my kid eat the tart before his run in case he vomits...
regards
octopusmum

Banana tart looks really very delicious and its healthy too :)

Hi HHB,
Your bakes are getting more and more healthy. A wholemeal tart is really wonderful to have!
It's quite a coincidence too, my eldest boy also went for his NAPFA 1.6km run at Toa Payoh Stadium last Saturday too! It seems like he is in the same school as "Octopusmum's" son. And perhaps, your son too? ;)

Oh, btw, I love your new header. Can you teach me how to do that? :p It's a gallery of your beautiful creations! :)

Hi Jane, please see the comments under my previous post on "When a fruit is not a fruit". I have left a brief comment on how I went about creating the header. Hope it helps :)

Hi HHB,
Thanks for your info. I wanted to make it a point to comment in your posts, but just couldn't find the time to do it sometimes. In the event that I didn't comment in your blog, just want to let you know that I have been faithfully following your posts! :)

for the finish look of the banana slices on top of the tart, you can actually try to coat the bananas with caramelised sugar before placing on top.

The banana tart looks stunning! You always bake the loveliest tarts :) And it's so sweet of you to take into consideration your son's run when contemplating his morning meal. Your sons are very lucky to have you :)

This looks wonderful. Never had a banana tart like this, would love to try it

This banana Tart looks delicious!!!!!!I love any banana dessert, I really have to make yours.

You are truly a good baker and your photos are so attractive and inviting , thanks for sharing !

Looks delicious!! I'm sure this gave your son lots of necessary energy to do the school's long distance run. And I love the wholemeal flour! Genius!