I have been back to my usual bread-making routine for quite some time, you don't get to see much of my homemade bread here as I have trouble trying to keeping up with my blog posting. I definitely bake faster than I could blog! 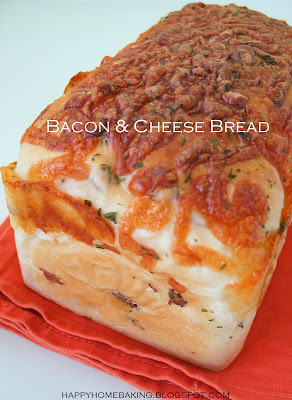 For the past week, I have made mini-polo buns, a wholemeal raisin loaf and the latest is this Bacon & Cheese loaf. 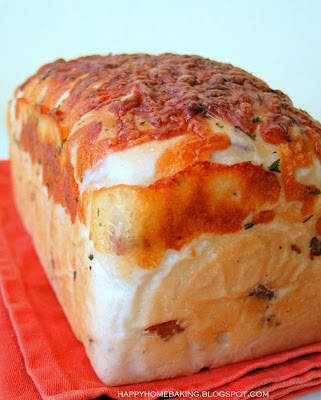 As usual, I used my bread machine to do the kneading...it was almost like making a plain sandwich loaf, except for one little extra step of pan-frying some bacon. It could be due to the 'cold' flour (I stored it in the fridge) or the temperature of the water, this dough took quite a long time to rise, especially during the 2nd proof...it was almost 2 hours later before I could pop it into the oven. Other than a slightly 'shorter' loaf than usual, the end result was very satisfactory. 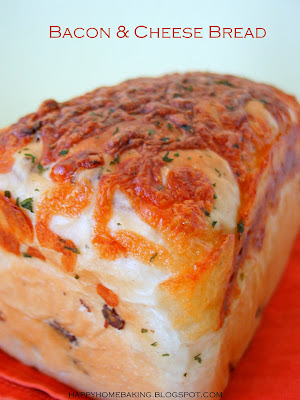 I went weak the moment I unmolded this loaf and removed the parchment paper. It was baked to a gorgeous golden brown all over...the aroma from the loaf freshly out of the oven was simply irresistible! 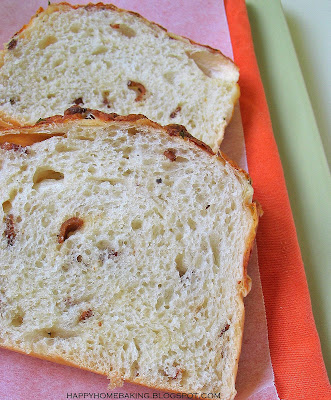 It was a joy eating a slice of this bread...the bacon bits and mild peppery taste from freshly grounded black pepper was a match in heaven...not forgetting the savory melted cheese on the crust. The bread kept well too...which I have stored in a Lock & Lock bread container. Since homemade bread tends to 'age' faster, keeping them in air-tight container is the best solution. The bread was still soft on the 3rd day and I toasted the last slice, which I saved just to test the texture...and it tasted just as good.

May I know where you bought your bread flour from?

I do not like Phoon Huat bread flour as I find its not as good as those from USA or Canada or UK. In fact the texture is disappointing.

Cold Storage used to stock the Made in Canada white bread flour specially for baking bread without need of bread machine, that was the best bread flour ever, unfortunately they no longer carry this brand.

oooh that looks delicious! i've had a recipe for a bacon and cheese loaf i've been wanting to try for a while too, it sounds delicious.

Wow i just finished baking a bread too! my first ever baked bread. but my ctrust is very hard and inside is ok. any tips for this? would love to try with cheese one day too once ive succeeded!

Your bread looks beautiful! I think it's hard to go wrong when it involves bacon.

Mmm, this bread looks fantastic. Cheese and bacon are a match made in heaven. I've been on a bread kick lately, so I can't wait to try this bread. Your pictures were making my mouth water!

Bacon and cheese, perfect match! I can smell the aroma from my computer screen (tee tee).

Btw, I left a comment in your 'sweet bun' post, did u see it? I followed this recipe to make my first bread. :)

Dear HHB,
Your bakes are delicious looking as ever. Your blog was one of the blogs that inspired me to start blogging again.
I was wondering how you make those little categories of brownies, jams, dessert etc. as I would love to add them in my blog.
Thanks for being an inspirator!

The bread looks great, I've the recipe book too. Will try this one once I'm free. I like the way you took those pictures, good job!

I would like to try full cycle in the breadmachine. Is it advisable cos I've not bought my pull man tin.

If so, what function is best... dough or sweet function ?

Thanks for sharing.
Ling

Wahh!! Your bread looks really tasty. I've not tried this recipe yet, your one looks better than the book one, very nice!

Hi Missy, as many factors can affect the outcome of a homemade bread, I am not able to give any comment...but I would think the hard crust is due to your oven or did you bake it using a bread machine?

Hi Let's masak, I read your blog post on your first bread! I typed out the comment but realised that I need to register before I could leave a comment on your blog. I'll rate your sweet buns 99 marks...1 deducted 1 mark coz I can't get to eat your bread ;p

Hi Grub, thanks for your kind comments. I'm happy to hear that you have gone back to blogging again :)
You can add the categories by going to the 'Page Element', then click on the 'Add a Gadget' link, and select 'Link List'. You will have to add in the link for each of your blog post.

Hi Ling, the DOUGH function will only do the kneading and proofing. It will not bake the bread. You can select the BASIC function for this recipe.

Hi Grace, do try it, I am sure you will like it!

Dear HHB,
Thanks for your fast reply!
I really appreciate it. (:

Thank you very much!!

Hello HHB,
I just took out my loaf from the oven. It tasted so goooood.....I replace the bacon slices with ready to eat bacon bits so no pan frying and the results was great...Thanks for sharing :)
Regards
Mayvis

I just found out your blog and loved it :)

Thanks for your encouragement. :)

You are my bread guru. tee tee.

May I check with u what model/brand of bread machine you currently using?

I am thinking if I shall get myself a bread machine or a bigger mixer to do the kneading, what do you think?

I realize you either knead by hand or by bread machine, never use cake mixer to do the kneading.

I'm definitely up for anything involving bacon! Looks great!

Hi Mayvis, thanks for sharing, what a great idea to use bacon bits ")

Hi Manuela, thanks for visiting!

Hi Let's masak, my bread machine is under carrefour's housebrand, Bluesky. I don't have a standing mixer, I only have a hand-me-down, handheld electric mixer, which doesnt come with a dough hook. As such I either use the breadmachine to knead or knead by hand.
It depends on your usage, if you prefer to shape the bread dough and bake it in your normal oven, then it will be better to get a mixer which comes with a dough hook. If you prefer to bake loaves and would always use the full cycle, ie knead, proof, bake; then you can consider a bread machine.

Hi HHB,
can we use cheddar cheese for topping?

Thanks for your advice.

I saw anather blogger using Bluesky brand also. I will check it out.

My mixer comes with dough hook but the capacity is too small, only 180w, not enough strength but bigger mixer (such as Kenwood chef) cost a bomb, in this bad economic got to think twice.

I share your joy juz drooling at your bread. Wonderful one and I am salivating and itching to try it out too :)))
Thanks for sharing the recipe. I love bread and bun...can never resist one :P

i have seen so many yummy bread around, i wanted to be able to bake bread just like you ladies.

I do not have a bread baker machine. Any recommendation where to buy one for home-use. thanks.

yoour bread looks yummy, i m going to buy one from a bakery later for teabreak !!

Hi Jackie, I bought my bread machine from Carrefour, under it's house brand, Bluesky. It is a basic bread machine. You can check the bigger departmental stores like Tangs, Robinsons for other brands.

I also copied this recipe, looks so yummy!
I made three times the honey buns. The first one, I forgot the milk!! Unbelievable! haha Looked like a pebble! terrible!
But I tried again. It was good, but not like yours, so light and soft.
So, I tried the third time and I got it!! The dough is really awesome! The taste is delicious!
Well, here I am, looking for more bread recipes from your blog. hehe
Everything here is gorgeous!

Hi Talita, it must have been a very wonderful experience, you can now try all sorts of bread recipes, happy baking :)

Hi HHB,
can one hand knead this recipe?
Ashanti

Hi Ashanti, yes, you can knead this by hand. As the dough is quite wet, you may take 20-30mins of kneading until the dough becomes smooth and non-sticky.

I made this bread today at my boyfriend's request and it turned out perfect! I added pine nuts, though. Just sprinkled them on the dough before I rolled it up. Love your blog, btw! I'll definitely be making more of your goodies.

I've been following your blog for quite awhile now, and you are truly my inspirational baker. I made the hearty tuna buns couple days ago, and they were fantastic. Am now looking through your blog again to source for more bread recipes.

I wonder if the bacon and cheese bread can be shaped into small bread rolls? I gather I will have to bake them at lower heat and shorter timing, but will the shape change the taste of the bread?

Appreciate your reply. Again, thanks for posting such great recipes, pictures and stories. And keep them coming.

Hi Rach, I have not tried making this into buns. If you were to shape them into small rolls, you can try bake at 180degC for about 15mins or until the surface turns brown. Usually a loaf bread will give a lighter, softer texture as the dough is allowed to expand more, whereas a bread bun will tend to have crumbs that are more compact. So what I usually do is, I will only make bread buns if I want to wrap with fillings, if not, I will make it into a loaf. I will choose a plain slice of bread over a plain roll/bun. Hope you get what I mean?

Fantastic, actually I am a learner of culinary art and getting help from T.V. shows, and internet. I read your blog and really like it very much and feel that it is very helpful for me and every one who want chef education. Thanks a lot for share and keep it up.
Personal Chef Business Plan