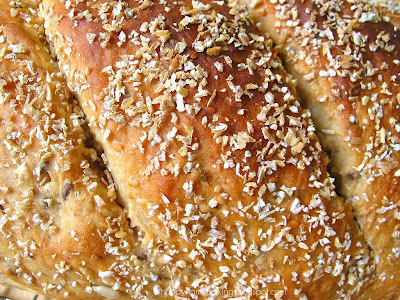 While doing my grocery shopping at the supermarket, I chance upon a shelf packed with different types of premix flour for baking cakes and bread. Out of curiosity, I picked up a pack of mult-grain bread premix and studied the instructions on the back of the package. I was immediately sold by how easy and convenient this bread can be made with a bread machine. All you need to do is to add water, honey, yeast and the pre-mix flour into the bread machine, in 3 hours you can get a fresh loaf of nutritious bread packed with wheat germ and grains such as rye seeds, sunflower seeds, linseed and sesame seeds.

I wasted no time in trying out this premix flour. Instead of using the bread machine to do the work, I decided to make the bread by hand. First of all, it was a great morning, I felt energetic enough to work on my muscles and I always enjoy the therapeutic activity of sinking my fingers into a nice soft dough. I expected the weather to be sunny for the rest of the day, so it would be good to proof the dough under room temperature. Furthermore, without using the bread machine to bake the loaf, I have control over the final shape of the finished loaf. 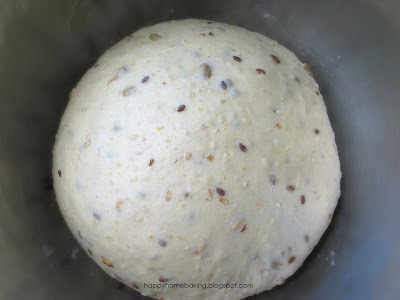 I used only half the portion as we would have a problem finishing a bigger loaf before the bread turns stale. Contrary to what I have expected, the dough was not as dry as those European breads, such as a pizza dough. It took me longer to knead the dough. For the first 10 minutes or so, the dough was rather sticky, I refrained from adding any extra flour, fearing that it would affect the texture of the finished loaf. A dough scraper is a very handy tool when it comes to scrapping up the sticky mess from the table top. I worked hard on the dough for another 10 more minutes...stretching, folding, make a quarter turn, stretch again, fold again, turn again... repeating the same actions over and over again.

To my relief the dough became smoother and my hands slowly came clean from all those sticky mess. At that stage, the dough was still not fully developed, it was not elastic enough as it tore off easily when I try to pull it apart. I continued to knead the dough, working hard to develop the gluten in the flour, repeating the same actions as above. Once it no longer stuck to my table top, occasionally, I would lift up the dough, give it a flip and slab it hard on the table. It gives me sheer pleasure just to do that...maybe that's the most therapeutic part of kneading a dough, this exercise would certainly help to release any stress and strains in your mind.

After 30 minutes of kneading (the maximum time limit I set for myself for kneading Any bread dough), I was finally satisfied with the result. I left the dough to rise, and walk-through the same bread making rituals of knocking down the dough, shape and let it rest for 10 minutes before shaping it again and left if for the final proof before baking* it in my oven. 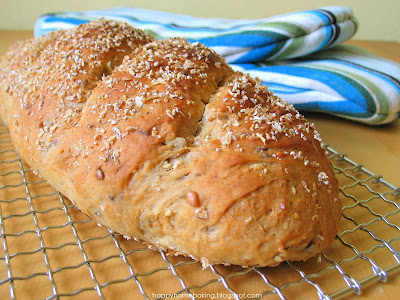 I shaped the dough into a longish loaf, and just before baking, I sprinkled some extra wholemeal flour (not included in the premix) on the crust, to give it a rustic appearance. 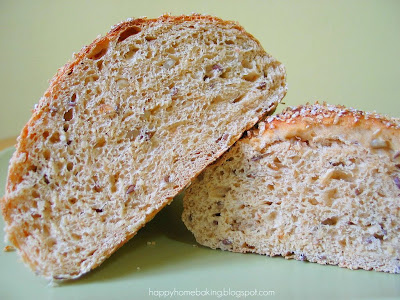 The bread crumbs were soft and not dense or chewy. I find that it tasted best, lightly toasted, before spreading generously with butter and kaya. Even my kids who hardly eat any whole grain breads didn't whine about it. 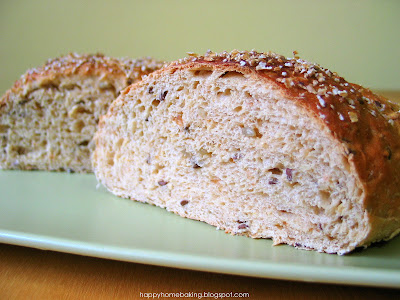 Although I am guilty of cooking off-the-shelf, I don't advocate to using any ready mix cake flour (the only exception is Betty Crocky's brownies premix), it is always better to bake from scratch. However, I think it does make sense to me, to use one of these multi-grain bread premix as I don't have to buy different types of grains and seeds separately, and saved the trouble of using them before they turn rancid. The downside of this premix is that there are other undesirable ingredients such as vegetable shortening, emulsifier (wonder what on earth that is?) included. In any case, I do belief as long as we cultivate the habit of eating everything in moderation, once in a while, out of convenience, I would rely on ready mix and off-the shelf food.

Afternote: It was only after posting this up that I remembered I have posted a video clip of my younger boy kneading away about a year ago. It brings a smile to my face to watch the clip again...the way he tried to stretch and push the dough, and I love those ten little fingers. I am posting the clip here again if you have not seen it before. Do note that this is NOT a demo on how to go about kneading a dough ;)

Hi HMM...see that u are back in ur bread baking action！:D always luv the bread u have made..so far i have tried a couple of ur bread recipes posted here, cos i'm not as skilful as u in bread making so turns out not as fluffy as it should be but still nice to eat:D I do not have a bread machine so have to depend on my handheld whisk to knead...hehehe dun dare to knead by hand though.

The dough looks lovely! I never have the patience to knead dough so I don't bake breads. But I just might bake one soon, since I just made my first pizza crust from dough!

Hi HHB! Your bread looks awesome, it's looks like one of the bakery! I've just enjoyed your last creation honey buns with Nutella... I'm italian after all :)D and I think this new bread looks as good as the other one. So many thanks for sharing with us your fantastic skill and for your terrific precise description of all the steps!
The fat in the mix of the flour (you mention shortening) remains mixed because of the emulsifiers you find in it...could be a good or a bad thing, depends on the origing of it, chemically speaking!
Thanks for the breakfast you inspire me this mornig!!!
Martina

Oooh this makes me hungry for a slice of it and some butter on top! And a video! THANK YOU! I need to conquer my bread phobia!

Hi HHB, I noticed that you do refer to Chinese blogs and recipes. I also refer to Chinese cookbooks when I am finding inspiration but I always encounter ingredients like 低筋面粉 which I do not know what is their English name. Wonder if you can enlighten me on this? Thanks.

I bought some premix sponge cake mix recently too and it's more convenient when I need to bake some quick cakes. :D I believe it's ok since most of the time, we are baking from scratch!

This looks like Gardenia country loaf which has become my favourite loaf lately! :)

Thanks for posting your son's video clip. It brings smile to me too!

I always knead my bread with hand (I do not have BM, btw), and I find the repetitive action of turning and pushing to be terribly therapeutic! My own way of de-stressing!

Peng, with a few more practice, I'm sure you will be able to get fluffy bread. You should try kneading by hand, I am certain that you will love it. Maybe after the initially kneading by your electric whisk, you can hand knead a dough a little to get a hang of it.

Hi Gay, pizza is a good start to bread making!

Martina, thanks so much for your kind words :) Oh I am sure those honey buns go very well with Nutella. Thanks for enlighting me on the chemical thingy :D

Eunice, that video clip is not suppose to be a good demo on how to knead a dough. don't ever follow that! You can check up youtube for professional demos :)

Hi Kym Kym, I refer to Chinese cookbooks (mainly written by Japanese author and translated to Chinese) as I prefer the smaller portions of the cakes and bakes.
低筋面粉refers to low-gluten flour, so I take it as cake flour; where as 高筋面粉 refers to bread flour; and 中筋面粉 I take it as plain or all-purpose flour. Let me know if you are not sure about other terms.

Hi Aimei, yes I saw the sponge cake you make with the premix :)
You can know make your own country loaf with this bread premix :)

Hi Cookie, yes I love kneading by hand...but sometimes if I am short of time, I will let my breadmachine do the work while I slog through the household chores ;p

Hi HHB, thanks for your advice. I have tried the Milo Doggie Cookies last week. Well received by my family. Gone within two days. Haha. Today going to try the Horlicks version.

hi chance upon your blog recently and really inspired by your effort and love put in to cooking and writting the blog. You write really well too. I've been baking some of the delicious bread you have posted,my family have enjoy them thoroughly. Thanks! keep it up.

im so amazed by your baking talent.! u can bake breads and u dont have to buy multi grain breads outside anymore! i always buy the Gardenia ones.. good and nice looking bread u have here.

From what i know emulsifier is an agent to replace the use of real eggs. Lecitin is an emulsifying found in eggyolks. So since its a premix, i think they add emuslifer so that it would help to bind the mixture easily. haha. I hope im not giving out the wrong info. =)

your boy worked really hard for the dough, can tell that he is trying his best. It's such a lovely thing that he shares the same passion as you. hehe...

So cute!! Your son has put in so much effort and yes his hands working on the dough look really sweet - am sure that bread must have been the tastiest!

Am I glad about videocams - I too have some videos of my kids helping me out in the kitchen, the younger one pulling his sister's hair and one of his first very own puppet show! It is such fun to watch, very nostalgic!