Prata in a Bento 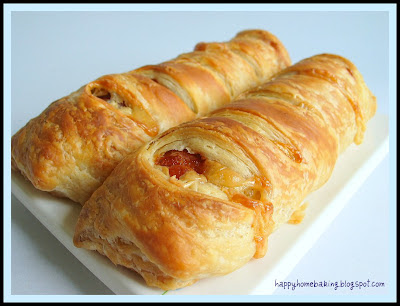 It was many months back when I first saw this prata sausage roll over at baking fiends unite! Ever since then, I have been wanting to try this out. Well, I finally bought a pack of frozen prata and made these rolls for lunch.

I left the frozen prata to thaw for a couple of minutes so that it was soft enough to roll up a cheese sausage in it. If the prata is left to thaw for too long, it will become very sticky and it will be difficult to roll it up. So, if you plan to make this, do watch out on this part. I made the slits on each roll before they were baked at 180degC for about 40mins. The finished rolls didn't look as appealing as those done by Baking Fiend :( 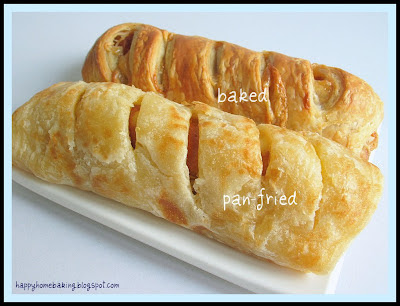 While the rolls were baking in the oven, I made another version of these prata rolls. Instead of baking, I pan-fried a piece of frozen prata with a little oil till it was slightly golden. Removed it from the frying pan, and pan-fried a lightly beaten egg. When the egg was about to set, I placed the ready prata onto to it and continue to pan-fry till both sides were golden browned. I left it to cool off a little before wrapping a sausage (pan-fried earlier) in it. As with the baked version, I make a few slits on the top and place it in the oven for about 5 mins. I guess this step is really not necessary. But it helped in a way to keep the rolls warm in the oven before they were served.

The prata rolls for the pan-fried version were more puffy, while the baked ones were very crispy. Both tasted yummy to me :) 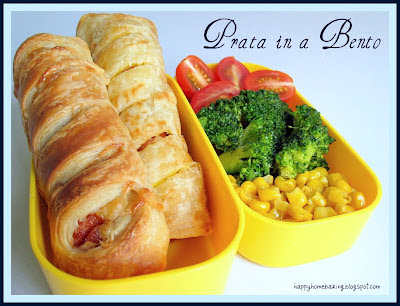 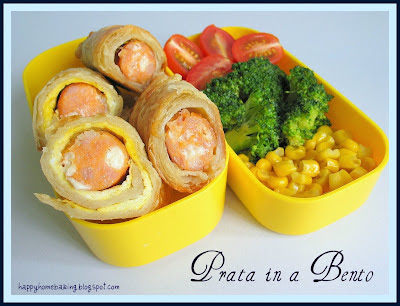 I prepared some vegetables to go along with the rolls and it became an instant bento lunch for the kids!

this would be on our weekend breakfast menu! Whoever first thought of this is brilliant. One question, how do you make the panfried version stay as a roll? do I need to glue them with something or use toothpick?

Hi Mandy, I didn't use any glue ;)
I placed the 'seam-side' or the 'open-end' down on the baking tray and baked it in the oven for about 5 mins. I guess the weight of the sausage somehow kept it sealed.

I've never thought of making a roll out of prata! Now I can come up with more ideas to make a meal with prata. This sausage prata is really a must try! :)

That reminds me of the sausage buns i used to eat as a kid. Yum! What a clever idea!

Lucky kids of yours!

I live in the netherlands and never heard of Prata before...do you think you could use Puff pastry instead? these look so yummie:)

Hi Sonya, yes, you can certainly try this with puff pastry :)

My kids made this in school few weeks and they been asking me to buy Prata & Saugages for them to make it. I was not really keen as I thot is was oily, heaty and unhealthy but the veggie that u added in made it so interesting! Thanks for the idea!

glad u made these! when my kids want the egg pratas, I'll wait for it to "puff up" in the pan, then cut an opening and pour in the egg! requires abit of luck to get it to stay nicely inside tho'... LOL.

I enjoy reading your blog. I’ve bookmarked you in my favorites. I am writing to invite you to join in the fun at the blog my sister-in-law and I keep…The Chocolistas.

We, The Chocolistas, are holding a Name That Chocolate Dessert Contest…August 4 - 16….with prizes! We’d love for you to participate.

Come and join the fun!
Deborah

Hi..i am a silent follower of ur blog..can share wif me how u upload the 'My Photos' onto the task bar?

I'm new here, and i'm very impressed by all your food and photo too. Just one quick question for :sweet bun", do i have to use cake flour?

Hi Life is full of surprises, yes, indeed these prata rolls are not something to eat on a regular basis ;)

Hi Ida, thanks for another great idea!

Hi Deborah, thanks for the inviting me to participate in your contest :) You two have a wonderful blog!

Hi Anonymous, thanks for your compliments...the recipe uses a combination of bread flour and cake flour. You may try to substitute with plain flour, however, I am not sure whether it will affect the texture of the bread.

I'am also in love with baking, and your blog inspired me to "upgrade" from photo-album (http://picasaweb.google.com/majasrdjan/Klopa) to blog. My blog is in Serbian, as my English is not so fluent. I am still working on layout, but already put your blog on my link list, if you don't mind.

I found your recipes interesting and inspiring, photos professional... Horlicks doggies made my day once I found them.

Thank you for being so crative and special thanks for sharing your experience.

hi happyhomebaking, just wanna thank you for posting and sharing so many wonderful recipes with us.

i came across your blog and now i am in love with baking too, even created a blog myself! you and family really inspire lots. haha. thanks!

Hi,
I really love reading your foodblog.Good job!Have you tried making french macarons before? Would like to learn from your blog =)

Hi Mamajac, thanks for your kind words and for linking me up :D

Hi Happy Little Baker, welcome to the blogging world...it's all about sharing and learning from each other. Will be looking forward to learn from you too :)

Hi Anonymous, thanks for your compliments! I have not tried making french macarons, however, there are many bloggers out there who have shared their recipes, I'm sure you will be able to learn from these talented bakers :)

May I know the ingredients of this prata in bento? :) Thanks

Hi Anonymous, I used ready-made frozen prata, and simply wrap it with sausage and bake it.

I tried this out and it was super yummy delicious!

Must say I love the use of roti prata bread in cooking. I've only had it when I've been out to eat! I'll look for it in grocery stores!

Of course this is was delayed since I just popped in. Have bookmarked your blog as I love the recipes! Nope...not a good baker, just enjoy it for special occasions. I wanted to share that I have used frozen prata to make curry puffs. Same idea..defrost the prata a wee bit, put in filling of curried minced beef/potatoes/green peas; then seal with beaten egg white and fry in a pan(will try baking it next time). I have also done appetiser size curry puffs by cutting the parata into half. A bit trickier to handle but a great hit at the party!