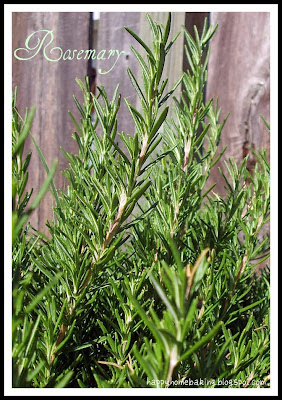 During my recent trip to the San Francisco bay area, I brought home a bunch of home grown fresh rosemary. I was just trying my luck to see whether they would survive the long journey back. I wrapped them with kitchen paper towel before sealing them in a ziplock bag. I was glad that they made it...they even managed to stay fresh for more than 3 weeks. I planted a few sprigs into a pot of soil, I just hope they will root someday. 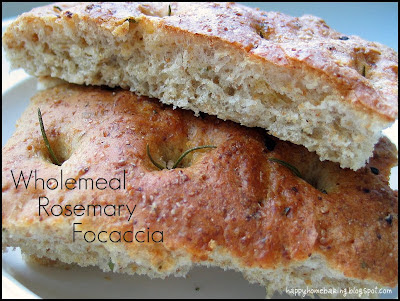 This first thing I made with the rosemary was a loaf of Wholemeal Rosemary Focaccia. I used the same focaccia recipe that I made previously. The only change I made was to replace half of the bread flour with wholemeal flour. This flat bread turned out to be very tasty especially with the enhanced texture from the wholemeal flour. 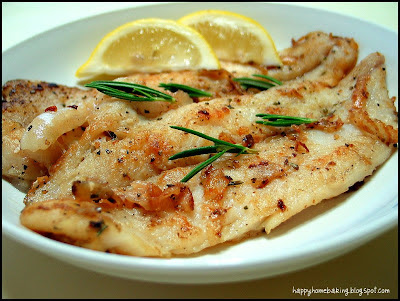 The next dish I tried was pan-fried Lemon & Rosemary Fillets. I seasoned the catfish fillets with some lemon juice, finely chopped garlic and rosemary, some salt and freshly grounded lemon pepper. It was my first attempt at pan-frying a fish fillet. I was real lucky that day, as the fillets didn't break into thousand pieces since I didn't use a non-stick pan, and on top of that I just couldn't kick the bad habit of turning a pan-fried fish several times while it is in the wok ;) 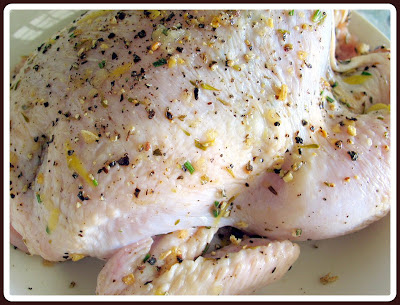 Another of my first attempt with the rosemary...roasting a whole chicken. It was the first time I have ever bought a whole chicken, and that is after 2 years of cooking at home. I find it such a gruesome task having to clean the cavity of the chicken! 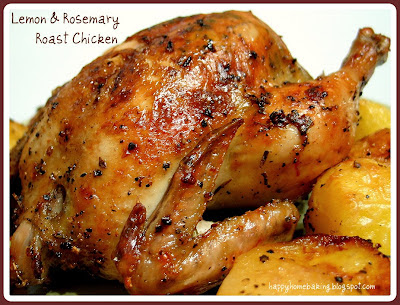 I followed some of the steps as written in Jamie Oliver's Roast chicken and potatoes recipe, however I didn't use exactly the same ingredients to marinate the chicken. Instead I rubbed the whole chicken with a combination of finely chopped rosemary, salt, ground pepper, lemon zest and some mixed herbs. I thoroughly enjoyed the rich aroma from the chicken while it was roasting away...the lovely fragrance of the rosemary and lemon combo was simply awesome. The chicken meat was very flavourful and juicy, even the chicken breast was passable, not too dry as I would expect.

The next thing I will love to try my hands on would be a rosemary potato pizza!

Email ThisBlogThis!Share to TwitterShare to FacebookShare to Pinterest
Labels: Others

I like the rosemary foccacia. Can I ask you how do you add the text on your photo (eg the label on your roast chicken)? Do you have special photo editing software?
Thanks for your advice.

Wow HHB! Your food looks so delicious and tempting! I love the foccacia! I always love that! But I've never tried baking it, thought it's tougher than baking a normal bread. :p

Hi hhb, i've been so busy haven't been baking and only managed to cook laksa fried rice last night. but forgot to take a photo of it :( as usual, your photos and food are well done and captivating *thumbs up*

The rosemary roast chicken looks so delicious! Very tempting to a chicken lover like me. Can I have a piece? :D

Wow, I'm a new reader of your blog and have been clicking on your posts and recipes, hoping to be able to try them some day soon. Thanks for sharing. And that rosemary chicken looks absolutely delish!

Wow, your pics are all so well taken so pretty & tempting ! When I roast chicken, I'll brine the chicken overnight, that is to immerse the whole chicken in a large pot in salt water, for about 12 hrs then drain the chicken & pat dry. This way the chicken especially the breast is so succulent & tender, try it..........

i love the way that bread looks

hi hhb! was missing your regular posts:) good to see your rosemary-spiced dishes..as usual the pics are soo well taken, that even after a heavy brunch..i am feeling quite hungry:P

Rosemary I adore on just about anything! Though I must admit, that focaccia is really calling my name. I make a pizza in the fall with fresh figs, blue cheese, and rosemary you might like too.

Hi Passionate About Baking, you should give foccacia...it's not as difficult.

Thanks Ganache-ganache for your tip. I shall try this method next time.

Hi Nags, whoisneha, thanks for your comments!

Susan, I am sure I will like your pizza!

Sally, rosemary really enhance the taste of the dishes...the taste is acceptable, I'm sure you will like it. You can get it at cold storage.

Hi Sally, I am sorry I do not have a proper recipe for the roast chicken. Do let me know which step you are not sure, I hope I would be able to help explain it.

Hi Sally, no mixed herbs are different from 五香粉. You can check out either NTUC or Cold storage outlets...look for spice bottles labeled as "Mixed Herbs" from either this brand McCormik of MastersFoods. Do not get mixed up with "Mixed Spices", which is totally different thing. Hope this helps :)