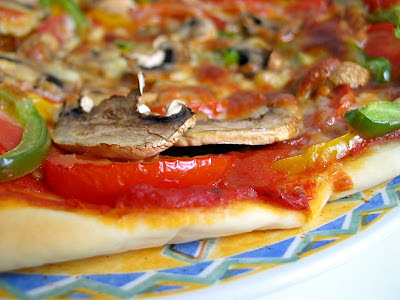 During the recent one week term break, I grabbed the opportunity to play around with another pizza dough recipe. I have always wanted to try my hands on a homemade thin-crust pizza, and this recipe was the answer to my search.

The recipe requires only a few basic ingredients, and the amount is just right for our family. It only requires 250g of flour to make two 12 inches pizza doughs. After comparing the instructions for this recipe and the previous one that I have tried, I noticed that in order to get a thinner crust, the pizza will have to be baked right away after the topping has been added. Allowing the dough to proof for another 15mins or so before baking will create a slightly puff-up crust. 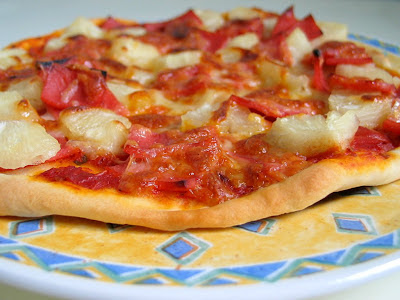 According to the instructions, I was supposed to be able to roll out the dough into two 12" rounds. Somehow, I didn't manage to reach that size...not even with the help of my younger boy...no matter how hard with pulled and tugged...the dough kept shrinking back. The furthest we could go was about 10 inches. It was easier for the 2nd portion though...probably it was left 'relaxing' on the table for almost 15mins while we were wrestling with the first one ;)

For the first pizza, I used the usual Hawaiian toppings which are my kids favourite. 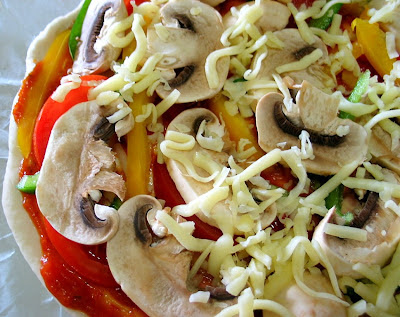 For the second one, I made it into a vegetarian pizza. I added in my favourite fresh button mushrooms, green and yellow bell peppers and some tomatoes. I was totally clueless whether this one would be edible...as it was the first time I tried using these combination of ingredients. 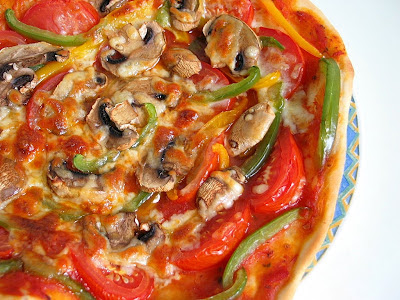 Well, I was glad to hear that my elder boy gave very good ratings for this veggie version :) In fact, he told me he preferred this over the ham & pineapple toppings. I love the natural juices and sweetness from the fresh ingredients...and the these toppings were real simple to prepare as there is no cooking involved. 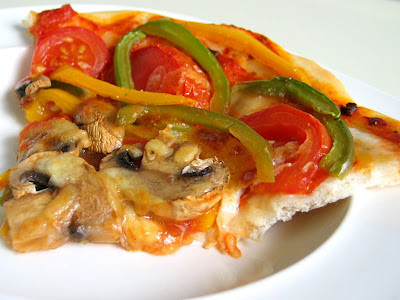 The crust was rather thin...although it was still a far-fetched from those biscuit-like thin pizza crusts. My elder boy told me he still prefers a deep pan pizza...and he declared that "the crust must be crispy on the outside and yet soft on the inside!" ;'(

Looks so delicious! My mum would want me to make this vegetarian pizza for her. :)

Hi, your pizza looks great! I prefer the thin crust pizza but I can't really get it right.

HHB, pizza is on my forever growing to-do-list also. My family prefers the thick crust pizza. Your vegetarian pizza looks heathily great! Thanks for that idea!

Beautiful pizza! ^^ i made pizza a couple of times, those pan crust type though, have yet to try thin crust :X do u face the problem of a slightly soggy center? i do! =( still trying to find out why, though with the slightly wet center, it is popular among friends and family, guess it cos of the tons of ingredients and toppings. I will definitely give this recipe a try :D thanks alot!

Your Pizza looks great. I tried making chiffon using your method in the previous post, but my cake sink in the middle. I used a normal cake pan though. Could you please advise? Also, I'm not quite sure how to see if the beating of egg white is sufficient. Does it mean it should drop when I flip the bowl over?

Hi Small small baker, you should make one for her...the dough is quite easy to knead...no sweat compared to the other soft breads!

Rei, I don't think I get it right as well ;) it's just thinner compared to the thick crust type, lolz!

KWF, you should give it a try! It's actually quite fun, and the dough is real simple to knead by hand. The only thing is unless you have got a oven baking stone, it's quite difficult to get the authentic taste of pizzas made professionally :(

Thanks Amandalwh, I have only made pizza a couple of times...but so far I didn't encounter the problem of soggy centre. I guess your generous use of toppings could be the culprit...but I doubt anyone will complaint, it's a happy problem ;D I read somewhere that you can slide the pizza onto a pre-heated baking tray so that the base gets an extra boost of heat. I tried to do that, but since I don't have the appropriate tools/equipment, what I did was, when the pizza was ready for baking, I removed the pre-heated tray from the oven, and placed the pizza (together with parchment paper) onto the tray and send it into the oven. I doubt this really made any difference though?!

Hi Jazz, for chiffon cake, it's best to use a tube pan. There could be a no. of reasons why your cake sank...it could be due to the oven temperature (not hot enough). Did the cake rise nicely in the oven? and you will have to invert the cake immediately when u remove it from the oven. Too short a baking time may also cause the cake to sink.
Actually I am not too sure about beating egg whites too...I usually check by lifting up the whisk...I have not tried inverting the mixing bowl! Anyway, you may check this site (http://www.baking911.com/howto/egg_whites_beat.htm) for instructions on how to beat the whites.

Hi HHB, Yum2! I have a question here...for pizza dough, do you need to knead until it passes the stretch test as in for breads? Or just a 10 min knead will do?

can i know whether fast-acting dry yeast is the same as active dry yeast? im very keen to try out this pizza! thanks for sharing ;))

Hi, Ohaiyogozaimasu,
I like to say thank you (domo arigatogozaimusu) and to all those girls out there who are so generous to share their recipes with everyone. Once again, thank you very much. I'm also a great lover of baking and am also a crazy cookbooks collector. Know what, come over to Australia or if you have some one who is willing to carry some heavy books in their luggage for you that would be better. There are some charity shops run by the church groups that sell donated second-hand cookbooks or sometime they are brand new ones too, for the price of A$2-A$5. A lot of them are really in good condition too.

Hi Aimei, from my understanding, pizza dough doesnt need to pass the stretch test. I usually knead the dough anytime between 10-15mins. The dough is not sticky and very easy to work with. Give it a try, and I am sure you will love it :) Do remember to put lots of cheese ;D

Hi Anonymous, from what I have read, active dry yeast should be dissolved in water before being used, whereas for fast-acting dry yeast (or Instant yeast) it can be mixed with the the other dry ingredients. If you have active dry yeast, what u can do is, first dissove the yeast in the warm water, leave for about 5mins, before mixing into the rest of the dry ingredients and the oil. Hope this helps.

Hi Airen, thanks for the info :)

mmm~ looks yummy leh!! I like this kind of crust, thin those type!

Shall attempt to do it! :D

Looks really good, esp the veg one! I love the thin crispy crust pizzas too. however, i find preparing pizzas to be such a hassle sometimes 'coz of the many ingredients involved. As i dun cook much, i'll have a hard time finishing the remaining ingredients. :(

You have made some beautiful pizza's here! Love the thin crispy base yum!

Hi Linfoong, thanks! I can't wait to read about it in your blog :D

Hi Ida, yes, I understand. When I was working, it took us ages just to finish up 10 eggs...now I need to get eggs almost every week!

Hi, I love pizza and I usually purchase frozen naan and use them for my pizza base. thanks for the dough recipe! can i make them a day in advance and chill them?

Hi TPL, I have not tried chilling dough...I'm so sorry I can't give any advice on this.

Hi HBB, thanks for sharing the recipe. I try and love it!

Hi Elyn, glad to hear that u like this recipe :)

Hi HHB, love your pizza and thanks for sharing the receip. I try it out tonight but my crust is so thick. How to make it thin like your pizza?

Hi Jo, you will need to stretch and roll out the dough as thinly as possible, and each dough should be about 12" in diameter.

FAO all of the comments about being unable to make a good thin-crust pizza and it often being too soggy.

You really need to stretch it out fully, make sure the base is of even consistancy all over and the biggest mistake everyone makes it ramming it ful of toppings, thats what makes it soggy. When the pizza is cooking the toppings "sweat", this wets through the base making it heavy and not allowing it to go crispy, particularly in the center. Remember pizza's shouldn't be a mountain. Keeping the toppings limited will ensure a crispy pizza

The nicest pizzas only have a few flavours and toppings on so you can truly taste each slice and flavour on the pizza.

Hi, thanks so much for sharing your tips and information :) I have learned not to pile up pizza like a mountain ;)

may i know what sort of pizza sauce you used? thanks! :D

Hi HHB, I just tried your pizza recipe & loved it. Thank you for sharing. =)

Tried this base and perfect results. I Knead the dough really hard for 10 mins and it does the trick. Getting the dough to 2 12inch trays was no problem at at. I found the easiest way was to shape was to roll the pizza base into an small citcle - say 6 inch then expand the base by rubbing it beween the palms of both hands to get it the the right diameter, finally pulling the dough to get it eaxctly round. A pizza stone is probably the best way to cook but I used a pizza tray (round pan with lots of holes in) and it baked perfectly. Would recommend getting a pizza tray if you don't have one.

Hi, thanks for your tips! yes, I have actually planned to get one of those pizza pans....but I dont see them at Phoon Huat after I got my built in oven. Will go look again for it...