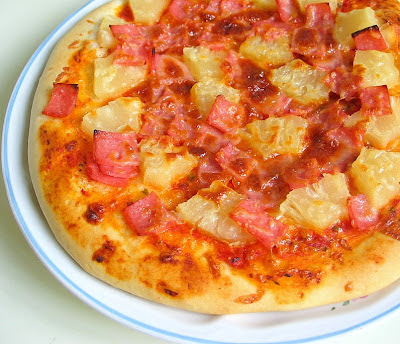 I made this Hawaiian Pizza a couple of days back for lunch. As it was the first time I attempted to make a pizza from scratch, I thought a Hawaiian Pizza would be just simple enough for me to handle. In fact, my kids very much prefer Hawaiian Pizza over other toppings. I used the most basic ingredients...grated cheese, canned pineapples and some ham. As for the tomato sauce, I used some leftover store-bought pasta sauce. I wasn't really sure whether the pizza would turn out edible, so I actually had a plan B in mind...ie to bring the kids to the McDonald's if all else failed. 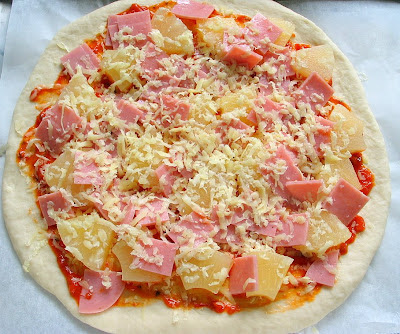 The pizza dough was rather easy to work with as compared to some other bread doughs. There were only basic ingredients such as flour, salt, water, oil and yeast. The dough was not sticky at all, so it was a breeze kneading it. I followed the instructions and knead the dough for about 10 mins by hand. The dough rise beautifully within an hour's time, thanks to the good sunny weather on that morning :) 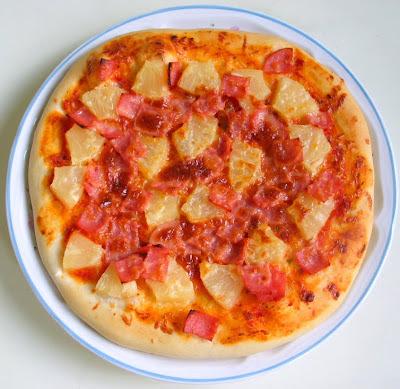 It was only after reading some pizza-making recipes that I learned that the mozzarella cheese has to be added in two layers...that is, after spreading the pizza sauce over the dough, a layer of cheese has to be added, followed by the toppings, before covering the entire surface with another layer of cheese again. I always thought that the cheese is added only on the top most layer. 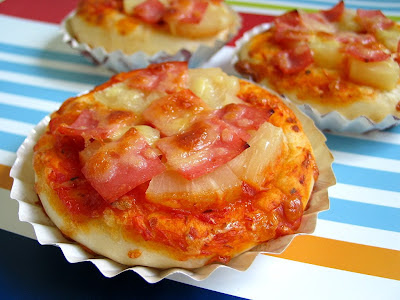 Since the recipe is meant for a 12in pizza pan, I knew that I would have extra dough left as my biggest tray is about 10in. So I took out some dough (without even weighing it!) and made 3 mini-pizza (as I was left with the last 3 paper cases).

The pizza took about 25mins to bake, and it turned out that I didn't add enough sauce and definitely not enough cheese! You see, the tool that I used to grate the cheese, is actually not suitable...the grated cheese were too thin...as compared to those ready-grated ones. Hence, the pizza was not cheesy enough :( 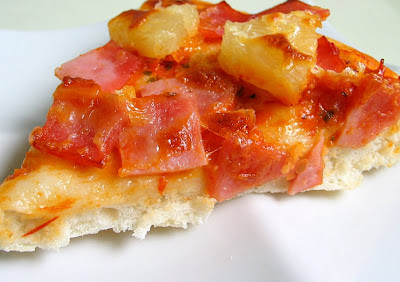 Like I have always mentioned, I am blessed with 2 kids who are not very fussy with food...they usually eat whatever I cook for them. I didn't have to execute plan B at all and they ate the pizza with real gusto! I think they were probably very hungry after school, and my elder boy thought that the pizza tasted better than those he had eaten from pizza outlets, lolz! I will certainly make this again during the school holidays, and they will get to make and design their own personal pizza :)

I have included the pizza dough recipe here, for those who are interested to give it a try. Do take note that the recipe will yield a thick crust, similar to pan-pizza. If you are a fan for thin crust, then this is not for you ;)


Ingredients:
(make one 12in pizza dough)

this wkend i also experimented with pizza but with different goals. don't laugh!

i wanted to make a kosong pizza dough to chew on as i was really hungry and no snacks at home, plus i wanted to make it biscuit like (like those kosong khong guan biscuits) for my girl as snack food. (i dont like those because i donno if they got trans fats!)

this is the recipe:
2 cups plain flour
3teaspoon baking powder
1teaspoon salt
(if u hv self-raising flour, it will replace all 3 ingredients above)
120ml water
4tablespoons oil (i used olive).
mix all into dough.
shape into whatever shape.
bake at preheated 180C for 15 min or so. the thinner the dough u roll out, the crispier it will be. otherwise, it will be a 'chewy dough'.
i let the other dough rest cuz i had to go out, came back a few hours later, pop into oven, and bake.
or u can freeze it, and bake it.
my girl screams for the 'biscuits' now, apparently she likes it!

The pizza looks lovely :) My bf's more a pizza fan than I am, so I'm really glad that you've shared a recipe. Now I just have to find out if he prefers the thick crusted ones or the thin ones. Thanks again, HHB!

I can't remember how many times I said this :your kids are so lucky to have a mum who bake/cook so well! I like the mini pizza idea, looks like those I used to buy from bakeries in Singapore. :)

Hi ovenhaven, you can check this site if your bf prefers a thin crust (http://www.thegutsygourmet.net/piz-napoli.html) and look at how beautiful this talented blogger has made her pizza based on this same recipe. (http://www.wretch.cc/blog/mitong&article_id=18221932).

Aamena, thanks! but I personally think the uncooked pizza looks better before it was cooked ;p

Mandy, thanks! I saved the mini pizza for my hubsand when he came home for dinner...and my boy kept one for breakfast the next day :)

Your pizza looks yummy! I'm sure your kids were thrilled with it. If you want to play around with pizza some more, I did a week of pizza posts on my blog once. Lots of different varieties. Just do a search on pizza and they'll all come up.

Thanks Lynn! I will certainly check out your pizza blog postings =)

Nothing beats homemade pizza - so delicious!

your pizza looks delicious! last christmas my family made a bunch of individual pizzas, but they didn't turn out as well as yours! my brother loves hawaiian pizza..i definitely want to try your recipe for him. do you know any good recipes for whole wheat crusts or premade brands? Thanks, I can't wait to try it!

Hi J.Ho, you know what, last year, we had frozen pizza for xmas. This year, I'll probably be able to make fresh pizza :) I am new to pizza making, as such I have not really looked into pizza recipes. Sorry, I'm afraid I am of not much help in this area :(

Hi, i would love to try out your pizza. Can i use corn oil instead? And what type of ham r u using for this pizza?

Hi Anonymous, in terms of texture of the dough, I don't think it will be a problem is you were to use corn oil. However, I am not too sure about the taste. It seems like most pizza dough recipe recommend the use of olive oil...maybe it will give the crust a better taste? For me, personally I won't be able to tell the difference ;)
I used picinic ham, since this is my first pizza from scratch, I used cheap ingredients as I wasn't sure whether it will turn out well. You can add any toppings of your choice...just remember to add lots & lots of grated cheese!!

very nice
thank you so much =)

Hi. Looks nice. Can I know what oven you use and what mode you use? Thank you.

Hi, I am currently using Bosch HBN331E2J. However, this pizza was baked with my previous table top tefal oven, there is only top and bottom heat function.

I also use top and bottom heat function for my simple electric oven. I put at 200 degree Celsius. But do not how why it is always black on some parts of the pizza, and also the bread is dry.

hey i really like your recipes, I've try it and it was a success
I've also try pizza rolls which I've found tasty and easy to do ;)
Thanks