During our recent trip to Tokyo in June, we had breakfast at one of the western cafe chains, Pronto. The cafe was just one block away from the hotel we stayed. My nephew ordered one such egg toast: 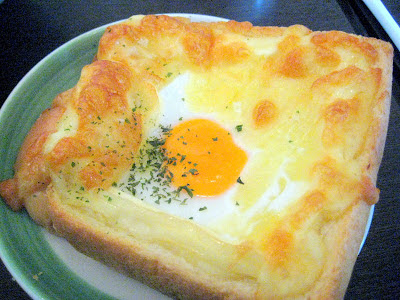 I didn't have a chance to try it, as we were all busy with the individual sets that we ordered for ourselves. After returning from the trip, I have been wanting to try to replicate this...however, I wasn't sure how the egg could set nicely on the bread toast. It remained a mystery to me until I came across a cookbook on the various ways to eat a bread toast. Although there is no specific recipe in that cookbook that teaches you how to make this egg toast, somehow, I got the idea and came up with my own version below: 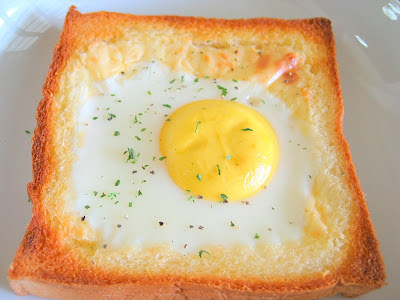 I am not sure about the taste, but it did look quite close to the original version. If you are interested, here's how I went about it: 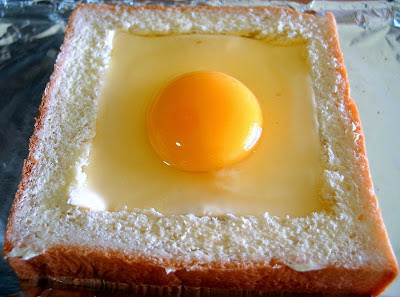 Place a thick toast (I used Breadtalk's thick loaf) on a baking tray, cut the four sides (but don't cut through) to get a square in the middle. With fingers or the back of a spoon, press and flatten the bread in the middle. Place a slice of cheese, press it down a little, and place an egg on it. Bake in a toaster or an oven, until the egg is set...depending on how cooked you like your egg to be. Sprinkle with some pepper and dried parsley's and serve. (To prevent the sides of the toast from getting browned faster than the egg, I spreaded some butter on the sides...it helps.) 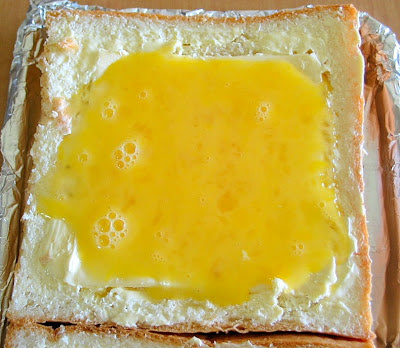 My younger boy doesn't really like sunny-side-up, so I lightly beaten an egg and poured it over. The beaten egg became watery, unlike the sunny-side up since egg white is thicker. As such, I had to be extra careful when transfering the baking tray to the toaster, making sure the egg didn't spill over the sides. 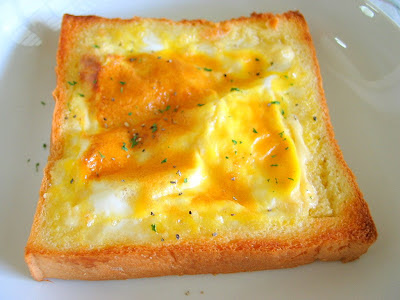 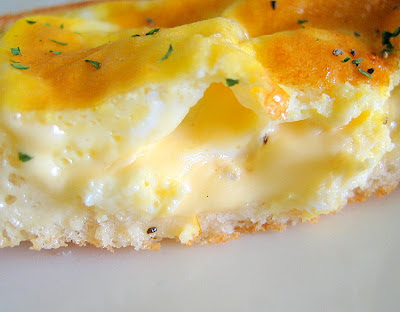 Too bad, my boy didn't like this scramble egg version either...he finds it too eggy and cheesy. 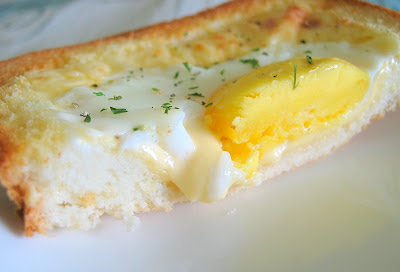 As for me, I prefer the sunny-side-up version better :)

I really love sunshine egg(荷包蛋)!!It seem to be a very 3 in 1 Nutritional breakfast(milk toast + cheese + egg) heee.
Btw, how long did u toast?

I used a toaster which doesn't have a temperature setting...didnt really take note how long it took...probably 5~8 mins.

Waht an interesting way to eat egg toast. Thanks for sharing this :-)

This is so interesting! I love both combination, will give it a try one day!

I have one similar book too! It's hand drawn and the contents are mainly on how to eat your toast in different ways. One of the method's like what you have done here! Looks yummmy! I just flipped through my book yesterday and saw that they squeeze mayo at the 4 edges of the toast, crack the egg and bring to toast.

Great idea for breakfast! I don't have a toaster. What temp do u think I should set if I use an oven and how long?

Ah, I like your recent photos. Gives us a preview of what u going to post next. Bread next time right? ;P

Mrs Kuo, the book that I have on hand should be different from yours. Thanks for telling me that it is possible to use mayo for the edges :)

Hi Lousy Baker (hmmm, I reallu dont like to address u with this. When are you going to change it?!) I think you can try setting it at 180degC should take about 8~10mins for the egg to set.

No, I wasn't using it as a preview! just that I am baking faster than I could post, lolz!

Hey I like this! Melted cheese with egg is my favourite. I didnt know I can toast it this way, usually i would fry my egg and put it on top of a slice of cheese and bread. Thanks for sharing this!

Btw, I bought the egg mould last week and have yet to try. hehe saw your previous post using the egg mould. So cute. Hope I will have success with it. :)

Hi Aimei, me too, only knew how to fry an egg and put it on a slice of bread! This is the first time I tried this.
Do make sure you get the right size eggs for your egg mould. The eggs that I usually use is a bit too small for the mould...on the other hand, if the egg is too big for the mould, it'll burst.

wow! this looks yummy! i sure will try this one day(:

hi there, chanced upon your blog. and yes, i loved this open faced sandwich, the combi is sooooo right (love the jap mayo).

how i wish they have pronto cafe in singapore!! ^-^

Hi! I made egg toast these couple days cos when I tried it the first time it was so GOOD o_o my version is a bit different from yours since I used a different cheese (where I have to cut it into small pieces)
my egg toast doesn't look as nice as yours tho XD
you can see it on flickr here
http://www.flickr.com/photos/puppy52/1739798010/

Ah this is 'egg in a basket', its a very old dish.

This Baked Cheese Egg Toast very delisious, I gonna to made it this weekend ^^

Hi!
This looks sooooo delicious! You're so good at "analysing" this and doing it so nicely. I shall this one of these days. I love cheese & egg, both combined, is really terrific! Bravo!

this is delicious...i would love to try it^^

I used to eat something like this as a kid. called "eggs in a frame."

Just punch a circle in a slice of bread with a cup or biscut cutter, put it in a fry pan, add an egg to the middle, and fry :)

I tried both and I like scramble egg version more. It's a great recipe to me as a big fan of cheese and egg. Oh, I will serve it as a snack for future gathering. Thanks for sharing !

I just tried that out few days ago. Both my mom and I love the scramble egg version better. Thanks for sharing this. (:

Wow. I want to try that! =w=
I think the difference with what you did compared to the orignal was the the cheese they used is different. :) Personally I would use uhm, a mixture of shredded cheddar and mozzerella(sp?). The cheese seemed to have to cook first, ad then the egg cracked into on top and returned to toasting.. or baking. D:
But nice work! I'm so hungry now... :)

I tried it this morn! Its fantastic! I used gardenia bread- 2 slices, top one torn in the middle. As for cheese - just cheesedale ;) Taste really good:)
Thanks so much!

Yummy, I tried this recipe today and it tasted great! 180C wasn't high enough for me, I had to put it to 200C to get it cooking just right. Although I wasn't able to make it perfectly (the yolk was halfway cooked while the egg white was a tad bit runny, only reason I didn't cook it longer was because the edges would have burned too much!) it still tasted delicious :)

Hi jennikim, I hope you have fun making these toasts. Maybe 200degC is too high, so the edges get burnt and the yolk cooked faster than the white.

Hi, This breakfast looks so nice, I am going to try it today. Thank you for the nice idea..xx

I bet this would be awesome with a thick slice of homemade bread! :)
Thanks for sharing, this is going on our 2 week menu this week!

Hi, I tried it and my son love it. I stacked up 2 slice of toasts and shredded Swiss cheese. He prefers the scrambled version. Thanks.

Wao this is cool! I shall try it soon.