The Power of Food

After hearing great reviews by my "cyber friend", vb, I was all geared up to make a French style, Lemon Yoghurt Cake yesterday afternoon. 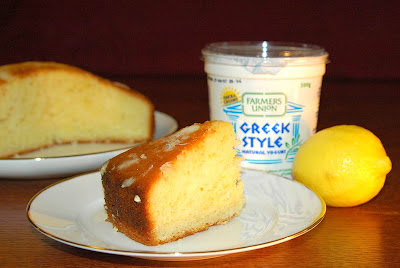 Now, vb has pointed me to two almost similar recipes...and it took me some time deciding which one to use. Both use almost the same ingredients, they are seemingly easy to make and both look equally gorgeous.

I only managed to make the decision after I watched the video clip of Molly of Orangette. The video clip is featured over at Food Network. It's about how her lemon yogurt cake brought her and her husband together, what a lovely story!! It's really amazing how food can bring two total strangers together :)

While I was busy zesting the lemons, my younger one was lured into the kitchen by the nice smell of lemons. He offered to help me when he found out that I was going to bake a lemon cake. This cake is a very simple and straight forward to make...with just a few stirring and mixing, it was all done. After I popped the cake into the oven, I went to send a message to vb, telling her that I had just made the cake...and I was pleasantly surprised to know that she had also just baked hers! Great, I thought, this would be interesting...we would be able to compare notes right after mine was done.

Since both of us made the same cake at about the same time, but over at two locations...me in my little kitchen in Singapore and she in her Hong Kong apartment...I suggested to her that I would love to do a post of both our bakes. I was so glad that she agreed to it right on :)

Ok, here's how our cakes turn out: 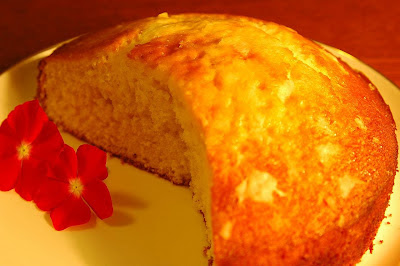 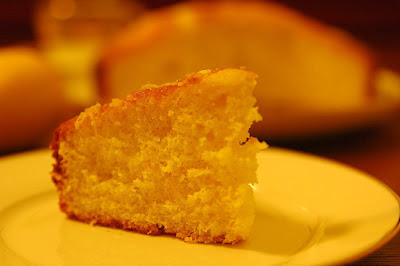 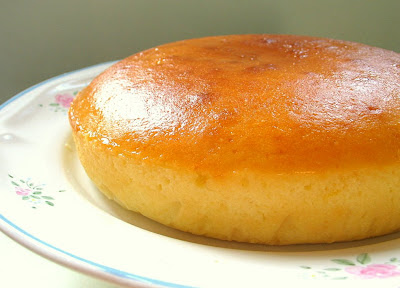 Mine turned out to be a total flop ;p The cake was rather flat and dense...unlike vb's which looked so soft and fluffy! I believe it was due to the low oven temperature, my oven is not giving me the accurate temperature setting. I guess I really have to get an oven thermometer soon. I followed Molly's recipe quite closely, except that I used an 8 inch pan instead of a 9 inch one as recommended. My cake took longer than the time required to bake and I had to cover the cake with foil and bake it for another 15 mins or so before the toothpick inserted into the centre came out clean. Due to my boy's poor mixing/stirring skills (yes, I am blaming him! poor kid!), there were several black dots on the cake surface...I suppose, it was a result of speckles of flour trapped in air bubbles. 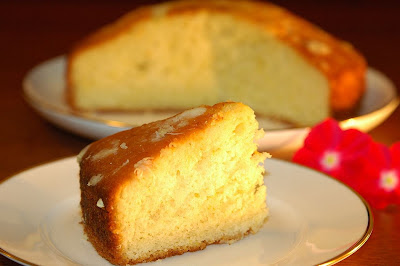 and mine was uncooked in the centre :'( 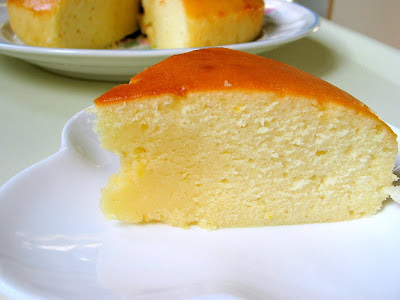 Although my cake didn't turn out well, other than the uncooked centre, it still tasted rather good. The lemon glaze really jazz up the cake a great deal. The cake was half gone by dinner time!

It was fun writing this post...and this marks my 100th post!! I shall dedicate this post to vb, who shares the same craze in baking like me ;) Thank you for sharing all your baking experiences with me...and it always bring a smile to my face whenever I read your messages. I am so glad that you found my food blog, if not I won't be able to know someone like you in my lifetime! See, that's the Power of Food!

Oh this is sweet and fun! Even though the results are not as you want it to be. I find that using different size tins are quite dangerous, my results always flop when I disobey the insturctions.

I tried making a similar yoghurt cake before and like you, I got a dense cake! Don't know why till this day.;p
Congrats on the 100th post mark! May there be more to come!

Hi Little Nutbrown Hare, yes I am aware that we should always follow the pan size...I even prepared two rameskin to standby so that I could use them for any excess batter. But after I poured in the mixture into the cake pan, it was only half filled, so I though there shouldn't be any problem with it :(

Mandy, really you had the same experience? I will try the other yogurt cake recipe soon, hope it will turn up ok :)

Very nice cake. Eventhough it didn't turn out as you expected it to be, at least you liked the end product and most importantly you enjoyed the whole process. Congrats on your 100 post and I'm hoping to read more post from you.

Congrats on your 100th post! It's a fun one - I love the two of you cooking (virtually) together.

Anne, I agreed, it's the process that is more important :)

Hi Lynn, thanks! It was indeed a very enjoyable experience!

Wow.. I love lemon yogurt cake. I do make 1 too which is recomend by my blog pal and it's really nice and moist. Yours do look great too.... Congret on your 100 posts too!!! Jai You.. I love all your bread posts they are so delicous.. :)

hi
you have a lovely blog n I like to read abt your baking adventures, :D

I have something for you to pass on here ...

Hi Ellena, thanks for your sweet comments and encouragement =)

Hi Peony, glad to hear that you like reading about my baking adventures :) and once again thanks for passing me the award, really appreciate it :D

Congrats on your 100th post! I have been visiting your blog everyday ever since I discover your blog and I am always looking forward to read it. Thanks for sharing many nice recipes, together with colourful photos and lively descriptions. Well done! :)

lousy baker, thanks for your kind words :)

beautiful, i love lemon yogurt cake, yours looks very moist and for sure delicious ;)

What a lovely cake! And thanks for visiting my blog! :)

i made similar cake (though not a lemon yogurt) from a recipe in a magazine which you might want to take a look: http://fooddiary.blogsome.com/2007/05/18/simple-and-versatile/

i hope you'll have more success next time!

Hi Eliza, thanks for sharing your recipe. Oh yout cake looks lovely! Will sure love to try it :)

hello! ive been visiting your blog for a really long time. it was your blog that got me baking. well one of the many blogs, along with cookandeat and dessertfirst and cupcakeblog.

thank you! the cakes look wonderful.

hi Sze, it's the first time you leave your comments, so I didn't know you have been visiting! I feel so honoured that my blog has inspired you to start baking :) Will love to hear from you more often =D

hey i just tried this cake and it was really nice and fluffy! we just got a new oven yesterday and i was dying to try something and chanced upon this.. dunno why your's was dense... i wasnt too fussy about the temperature too, still it turned out fine...

Hi Aamena, glad to hear that you yogurt cake turns out well! I attempted another yogurt cake recipe and it also turned out very dense...but I'm not going to give up, will try it out again :)

heyi posted it today... a little late, but i'd like you to check it out!

Hi! Great blog, I love that you post things that don't work out as well as you planned, it's inspiring because it happens to everyone and it's nice to see someone admit it! The best ever lemon yogurt cake that's honestly easy to make and my whole family had had success with, is from the eatpress website. (http://www.eatpress.com/?p=2707)
Promise you won't be disappointed!

I have been using the recipe from The Little Teochew as a base recipe. You might like to check it out =)