After visiting the Sensoji at Asakusa and shopping at the Nakamise street, we decided to have lunch at this cook-it-yourself Okonomiyaki restaurant, as recommended by a travel guide book. The restaurant is called the Rokumonsen - 六文銭, literally, it means Six Cents. Of course the food there cost more than six cents! According to the travel guide, there are two outlets in Asakusa...the main restaurant and a smaller outlet. Both are within walking distance from the Sensoji. Somehow, the map provided was not very detailed, we had to "ask" around before we could locate the main restaurant. As we don't understand or speak Japanese language, we could only used sign language when asking for directions. Hence, it took us a while to finally locate the restaurant. Guess what, it was closed for renovation! We had to make our way to the other smaller outlet...after missing a few turns and stopping to ask for directions, we finally found the outlet which was located on a side street on the second floor of a small building. 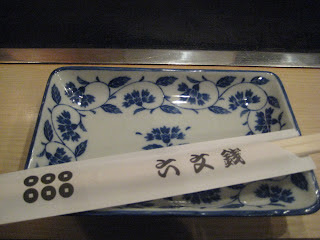 Once we settled down to our table (which was fitted with a hot plate), I ordered a few types of okonomiyaki and Monjayaki to try.

Okonomiyaki is a pancake-like dish that is cooked with batter and various ingredients such as diced seafood, meat and vegetables. The mixture of batter and ingredients is then cooked over a hot plate (teppan). The name of this dish means "cook what you like, the way you like" as okonomi means "what you like" or "what you want", and yaki means "grilled" or "cooked".

Monjayaki is somewhat similar to okonomiyaki, except that the batter is more liquid and runnier than okonomiyaki.

We requested the restaurant staff to show us how to cook the okonomiyaki since we had no idea how to cook it. There's a picture showing the steps, but they were all in Japanese. 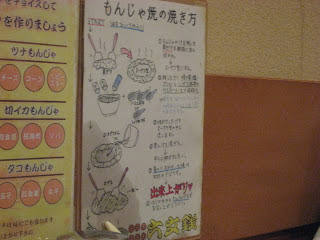 The staff came with bowls of raw ingredients. She first oiled the hot plate with cooking oil and instructed us to mix the raw ingredients in each bowl. She then poured each bowl of raw mixture onto the hot plate. With the help of two metal spatulas, she pushed and shaped the pancakes. 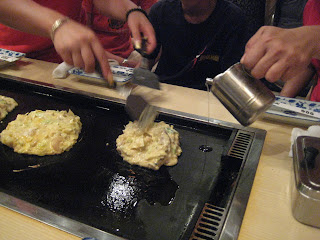 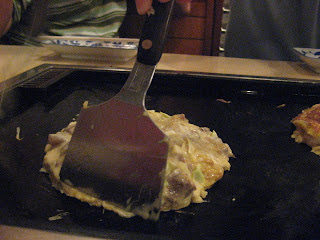 We were left on our own to cook the Okonomiyaki and flipping them over when done. All the while, we were keeping an eye on how the locals at the other tables were cooking their dishes. 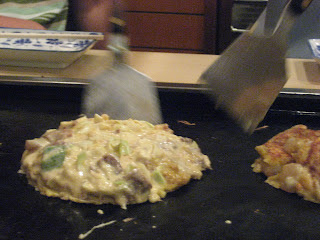 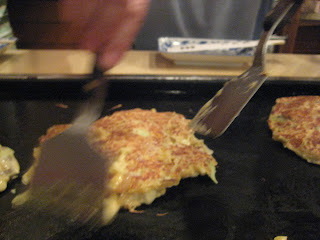 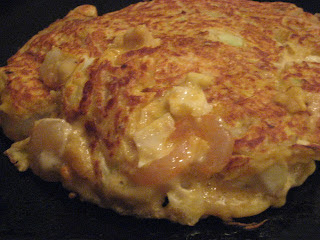 The staff then showed us how to brush the top of the Okonomiyaki with sauce, and finally, served with mayonnaise and topped with lots of dried bonito shavings. 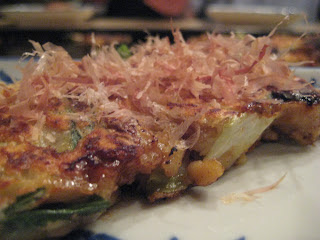 The cooking method for Monjayaki is slightly different. The staff first poured the ingredients onto the hot plate...stir-fry a little, then made a hole in the middle of the ingredients before pouring in the batter. 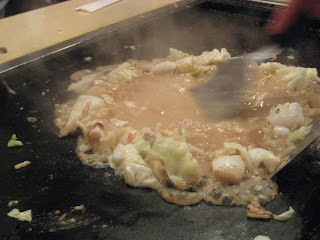 The kids found it very entertaining just watching the cooking done right in front of them...with the sizzling and the confused looks written over their parents ;'p 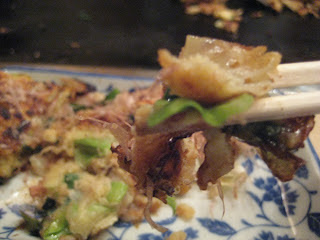 For dessert, we ordered the restaurant's speciality...fruit sherbets. There were lemon, orange, apple flavours to choose from. 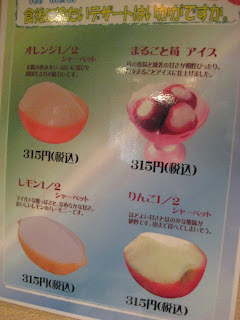 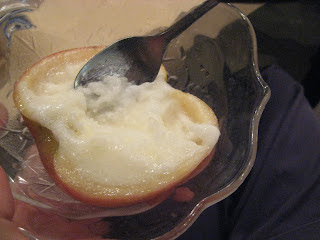 The sherbets certainly cooled down the heat from the hot plate and the Okonomiyaki dish.

This was yet another fun dinning experience we had in Tokyo =)

Email ThisBlogThis!Share to TwitterShare to FacebookShare to Pinterest
Labels: Travel