from Anne's home to mine 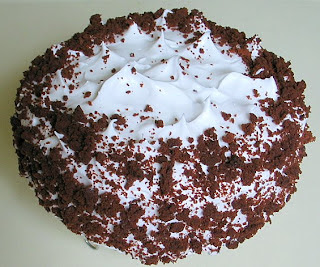 This is my version of Dorie Greenspan's Devil's Food White-Out Cake. Sorry, it didn't do any justice to an otherwise gorgeous cake.

After having seen the recent post by fellow flogger pal, Anne, I couldn't resist the temptation to try it out. I am very impressed with Anne's version of the cake. She has done such a great job in the layering, filling, frosting and decoration! In fact, I am always very inspired by her great cakes, most of the time, I would love to try out her recipes...however, they all look too challenging for me! When I take a closer look at the recipe of this white-out cake, I was quite confident that I could give it a try. The cake looks pretty easy to make, except for the marshmallow frosting. A candy thermometer is needed to ensure you get the right temperature of the syrup. Since I have yet to try whipping egg whites, I thought I should adopt Anne's easier method, that is, to use whipping cream for the frosting instead.

The cake has to be baked in two separate pans. Since my oven is only big enough to accommodate one pan at time, I thought of baking them one after another. However, knowing that baking soda is included in the recipe, I knew that it will not be a good idea to do so. The batter has to be baked immediately, as baking soda will react as soon as it is added to the the batter. To overcome this problem, I decided to bake 3/4 of the batter in one pan and the remaining quarter later. The last quarter is meant to make into crumbs to decorate the cake, as such, I thought it wouldn't matter if it didn't turn out well.

With the necessary ingredients on hand, I went ahead to bake the cake. All went well, until the cake went into the oven. I wasn't quite sure what went wrong, but the cake started to crack all over when it was almost done :( May be the batter was too much for the pan, but it was only about 70% filled. Only after inverting the cake, I realised that most the chocolate chips sank to the bottom of the cake. Hence, after slicing the cake, I flipped the slice over so that the cut side is facing down, and placed the cracked top layer in the middle. I patched up the broken pieces with whipped cream and managed to assemble a decent looking cake :)

I bought a pack of Phoon Huat's house brand non-dairy whipping cream to try. I must say it tastes better than the other brand that I have tried. The whipping cream is much easier to work with and I like the smooth, silky texture and it looks almost pure white. On top of that it is also much cheaper, only S$4 for one litre.

My younger boy offered to help frost the cake for me, too bad his brother was doing his last min. revision for his exam and missed the fun. My boy was very fascinated when the thin cream eventually turned foamy and mousse-like. He tasted the whipped cream and liked the slightly sweet taste. When he finally got the chance to taste the cake, he complained that the whipped cream didn't taste as sweet when eaten with the cake. While the elder boy commented that it was like eating 3 layers of brownies in a go. I was pleasantly surprised with their comments...it showed that they are starting to differentiate the slight differences in tastes and texture of food...something which I won't expect from young kids. :) 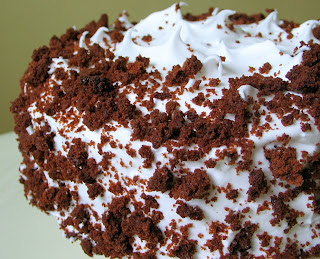 After having taken pictures of the cake, I compared it to the original photo on the bookcover of Dorie Greenspan's cookbook "from my home to yours"...I then realised that I should have filled up the sides of the cake with as much cake crumbs as possible. So, my cake has got lots of white patches here and there :( 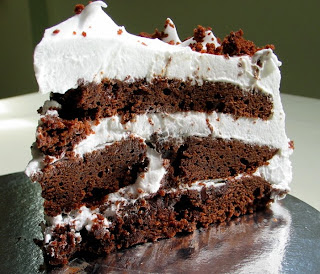 I think my cake looked much better before I filled it with the cake crumbs ;) 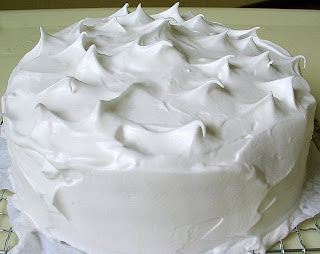 Like I've mentioned before I prefer this cake eaten right after I assembled it. It gets a bit dense while refrigerated. I agree with your little boys, its like eating a super fudgy brownie :) I haven't tried Phoon Huat's whipping cream, but if you say it's better than Avoset, then I think I wanna try it if I do get the chance. I agree the cake without the crumbs is pretty nice especially the peaks you've created on top :)

The cake sure look yummy! I like how u do the "peaks" on top.

hmmm...yummy. i don't mind baking cake but i don't have the audience to help me finish it :)

i've tried the hokkaido milk loaf last week, but didn't take pics yet. my hubby wants me to bake again this week and i'll remember to take pics. it's very delicious!

Hi Anne
I didn't have the chance to eat the cake before it goes into the fridge...but the crumbs tasted good. You should try PH whipping cream, the house brand is "Red man".

Eliza, I will keep a look out for your photos of the Hokkaido milk loaf :) I will also try it again soon...may add in other flavourings such as cranberries or wolfberries.

What's the color of the packaging of the whipping cream you bought? I just whipped up the blue color (diary)and it taste so yulky! It's dairy btw.

Hi Elyn, I bought the non-dairy type. It has got the Red Man logo on the package, and it's produced in Singapore. I threw away the box, so can't really recall the colour of the packaging.

Hi, I think your cake looks absolutely wonderful with or without the cake crumbs.

I have wanted to try it out for the longest time, but like Eliza, I don't have the audience to help me finish it up, and I hate wasting food. :)

Hi Cadenze, thanks for dropping by! It also takes us a few days to finish one cake...I'll only share it with my other family members if the cake is up to standard...but, most of the time, I have to finish the cake myself, hehe ;p

Your posting encouraged me to try the recipe too. My results are at
http://occasionalbaker.blogspot.com

Have a great day!

hi, i would like out this gorgeous cake... Wanna ask for the frosting, i just whip out "non diary whipping" ? Do i need to add anything ?
Btw, how much whipping cream to use ?

Hi Sukkimi, I used about 1.5 cups of non dairy whipping cream. Since the cream is already added with sugar, you just need to whip it, you need not add any sugar to it. Hope this helps :)

i wanna try this soon when i'm free... your site is inspiring me to keep bakin'!