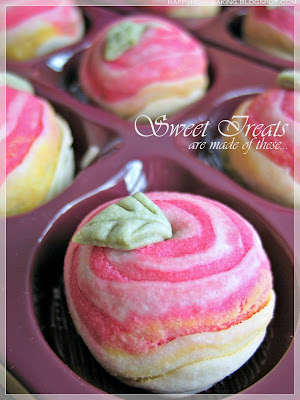 I have never thought that I would venture into making baked mooncakes. I chickened out after going through the ingredient list for making traditional baked mooncakes ^_^" 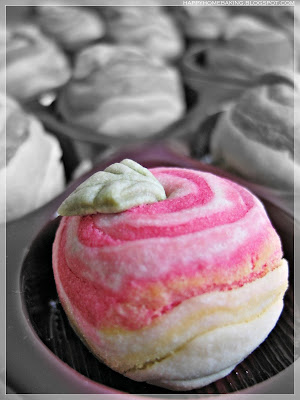 I was glad that I managed to get hold of this "Y3K cookbook, Mooncakes". Besides the snowskin mooncakes, I was happy to learn that I could actually try my hand at making mooncakes with flaky pastry! I nailed down this 'Apple Allure' flaky pastry mooncake recipe since I had all the ingredients on hand. Making the doughs was a breeze, but I had a hard time trying to figure out the correct way of wrapping/rolling the water dough with the coloured oil dough. Even though there are several photos to illustrate the steps, certain parts of the instructions is quite vague. In the end, I went about making it with my gut feel. I am not sure whether I did it right as the finished mooncakes appeared slightly different from those illustrated in the cookbook. 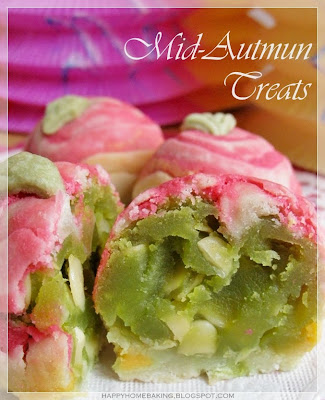 These tiny morsels are no bigger than 2", my tween is able to pop one into his mouth without getting choked. I used ready-made pandan lotus paste but I think it would taste better with yam paste. Since this is my maiden attempt, I am rather satisfied with the taste and texture. On the other hand, I think I could have done better. I probably didn't roll out the dough thin enough so the skin is not as flaky and definitely not comparable to those store-bought Teochew style mooncakes. Nevertheless, I felt a great sense of achievements when I left them to cool on the rack. 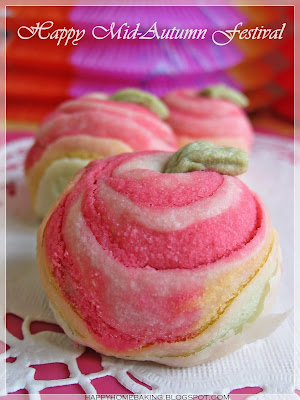 They are very awesome HHB! I'll make this next year, fingers crossed!

they're amazing! so pretty and cute~~ i have to try these out^^ thanks for sharing.

These and your previous mooncake post both look great! Definitely going to bookmark these for future reference.

These apple mooncake really look cute! I've not got the 'guts' to try out baked mooncakes yet. Gotta wait for another year, perhaps?

Oh my! These flaky mooncakes look good! I saw that edition of Y3K at bookstores, too! But, hesitated to get it LOL!

I hope I can make some of these next year ... Thanks for inspiring me to do so.

This are so jumping out at me!! I have never had a mooncake but you certainly have made me want to try one!

Wow, HHB, these are really impressive. I am not a big fan of mooncakes but your effort is really admirable :-)

wah, you really done a good job, Happy Mid-Autumn Festival to you too.

Just too cute to eat!

So so pretty... much nicer than those from 5* hotels!!
Amazing.
U know what, after 3 months, I still couldn't bake a soft bread, my bread is hard as rock the next day and I still couldn't figure out why.
I think I will never gonna dare to try this out.

i love the colours! they are soooo pretty.
love how they resemble fruits!
reminds me of japanese ice cream ;)
havent tried making mooncakes before.
but you make me want to make some next year!

This looks amazing... never tasted a mooncake before but these look really good.

I saw apple lookalike mooncake sold in the market and urs look equally good. Thumb up!! (I hope I can try making this 'apple mookcake' next year).

Hi
i want to bake your pizza recipe but wanted to know if you use the bottled Maggi tomato sauce (those use for dipping with fries) to spread on the pizza dough. Cos buying a special pasta sauce is more costly. Thks :)

Hi, No I don't use tomato sauce (ketchup), I used pizza sauce or sometimes if I have left over tomatoe-based pasta sauce I would use it. Hope this helps :)

All your moooncakes so beautiful! very neat and can see you put alot of patience in making it. :)

They are so pretty. They sure did not look small in the pictures. I hope I have time to make them (actually doesnt need to wait for next mooncake fest, hehe). No need mould (My mother kept all the mould cos she is shifting). 真的很漂亮。

hi hi.. first time here.. was introduced to your blog by a colleague of mine.

since then fall in love to your blog, love the beautiful pictures you taken, and admire your wonderful baking skill.

thanks for all the recipe shared here...

and may i know what (brand/type)of camera are you using?

Hi CARCAR, thanks for visiting :) I am using my 5 yr old Canon Powershot G3, a rather old model, G10 is already out in the market ^_^'

These are so colourful! I don't think I've ever tried these before; maybe I can request my Chinese friends to bake for me next year! :P

Awesome is how I would describe them, may try it out. Thanks for sharing.

These look really cool! Will try to make them next year ;-)

Hi HHB
I tried this yesterday and it is delicious. However, mine looks quite ugly, didn't get the clear line in the 'whirlpool' and the colors are not distinctive like yours. I guess it is because I folded it twice after rolling out as you mentioned yours was not as flaky. I do get a very flaky pastry but ugly. :)

I have never seen such beautiful looking mooncakes. I suppose you can use different fillings and turn them into something else, and have them at anytime of year, not just during Mid-Autumn Festival? :)

Hi, awesome instruction. A couple of question: Did you use liquid food colouring, or the gel form? And did yo use some form of a pan / tray for each mooncake to bake in? How many mooncakes did this recipe yield, and could I double it up? Thanks heaps.

Hi Jovy, I used liquid food colouring. I baked the mooncake on a baking tray line with parchment paper. This recipe yields 16. hope this helps.