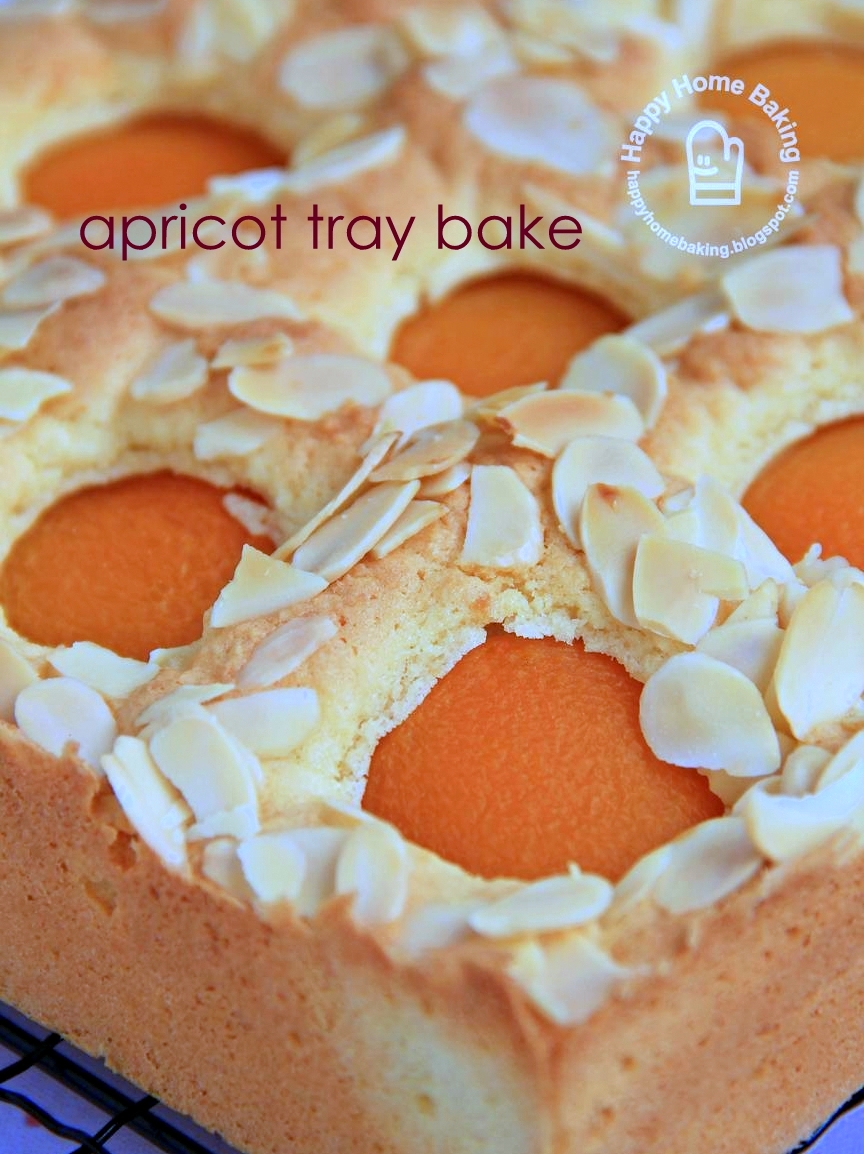 After months of procrastination, I finally gave myself a good kick and got down to bake this beautiful square cake. 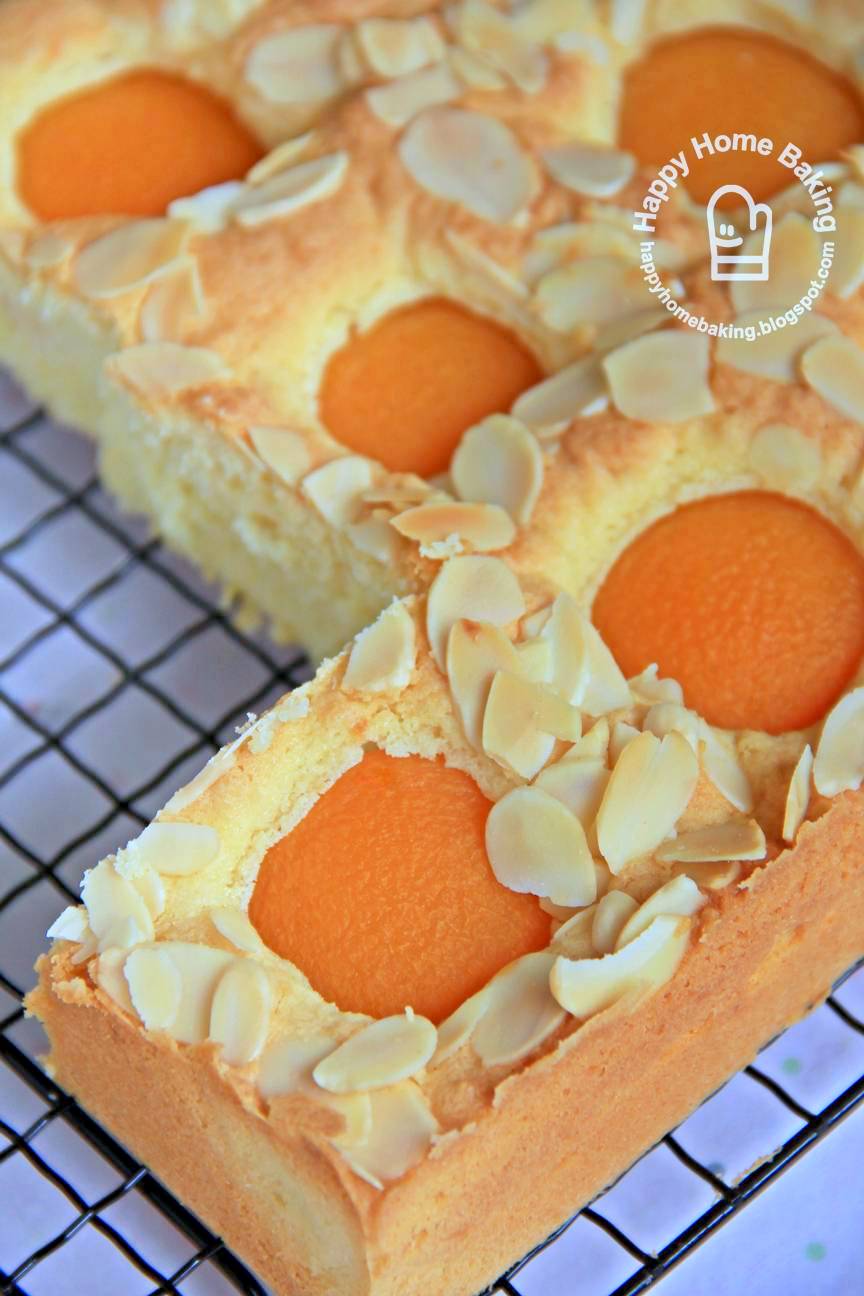 I got hooked when I first saw this almond and apricot tray bake from a cookbook dedicated to baking square cakes. I bookmarked several recipes from this cookbook and even went all out to get a 18cm square pan...that was months ago. The next thing I needed to get was the canned apricots. I didn't manage to get it until several months later when I finally spotted it on the supermarket shelves. 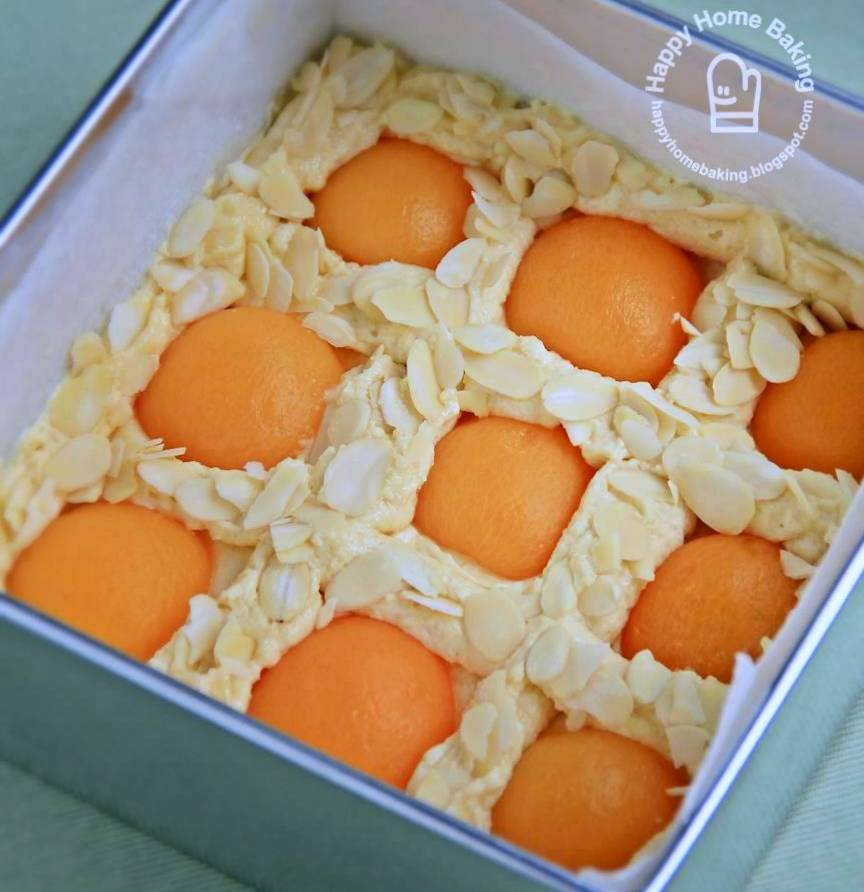 The method of preparing the cake batter is quite unique to me. Instead of the usual creaming of butter and sugar batter, followed by eggs...for this recipe, only the yolks are added to the butter mixture while the whites are beaten separately before the two are combined together. The flour is added last. I felt I was switching from creaming method, to chiffon cake making method then to sponge cake method through out the preparation process. 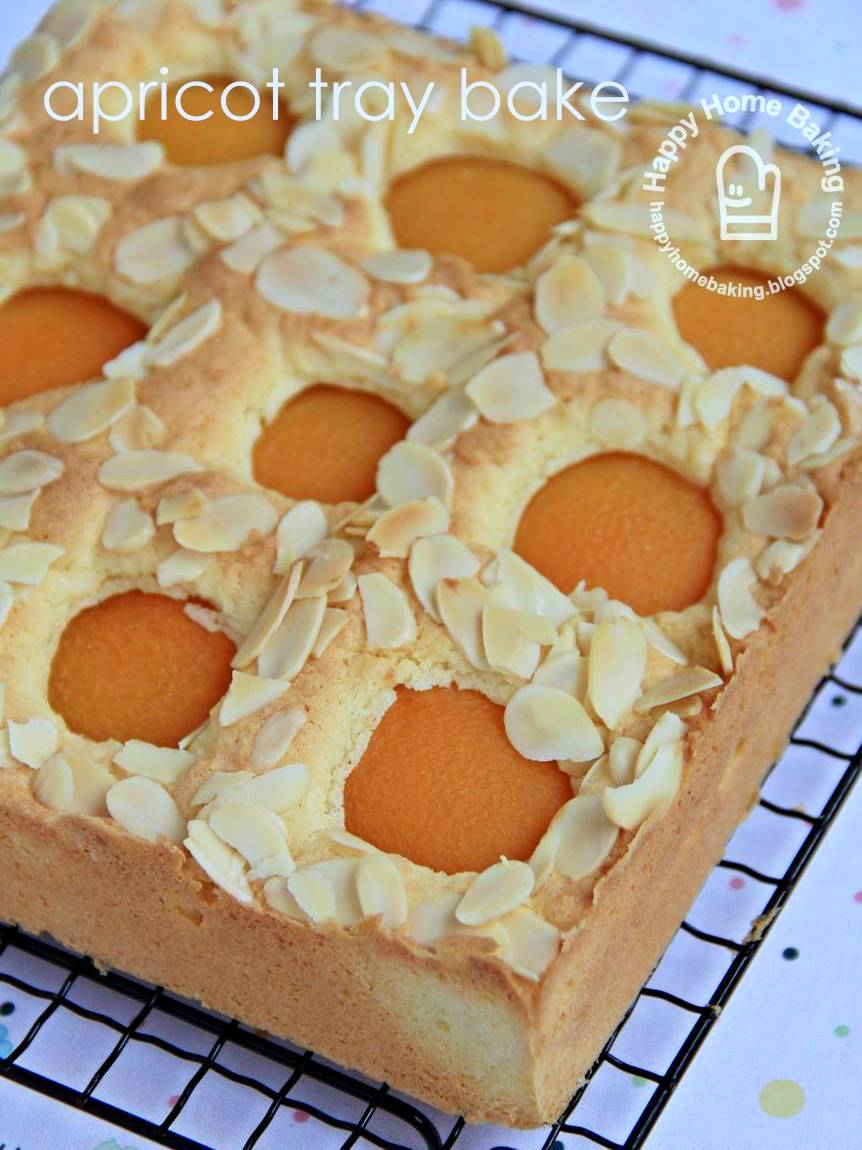 Guess I am too familiar with baking chiffon cakes, instead of adding the flour last, I added in right after mixing the yolks to the butter mixture. I didn't realise my mistake until when I was about to fold the whites to the yolk batter. I was wondering how not to deflate the beaten egg whites if the yolk batter was so dry and thick?

However, it was too late to do anything. I went ahead and surprisingly, I could blend the whites into the batter quite easily. I was expecting the cake to fall flat like a piece of flatbread, but to my delight, it manage to rise and puff up upon baking :) 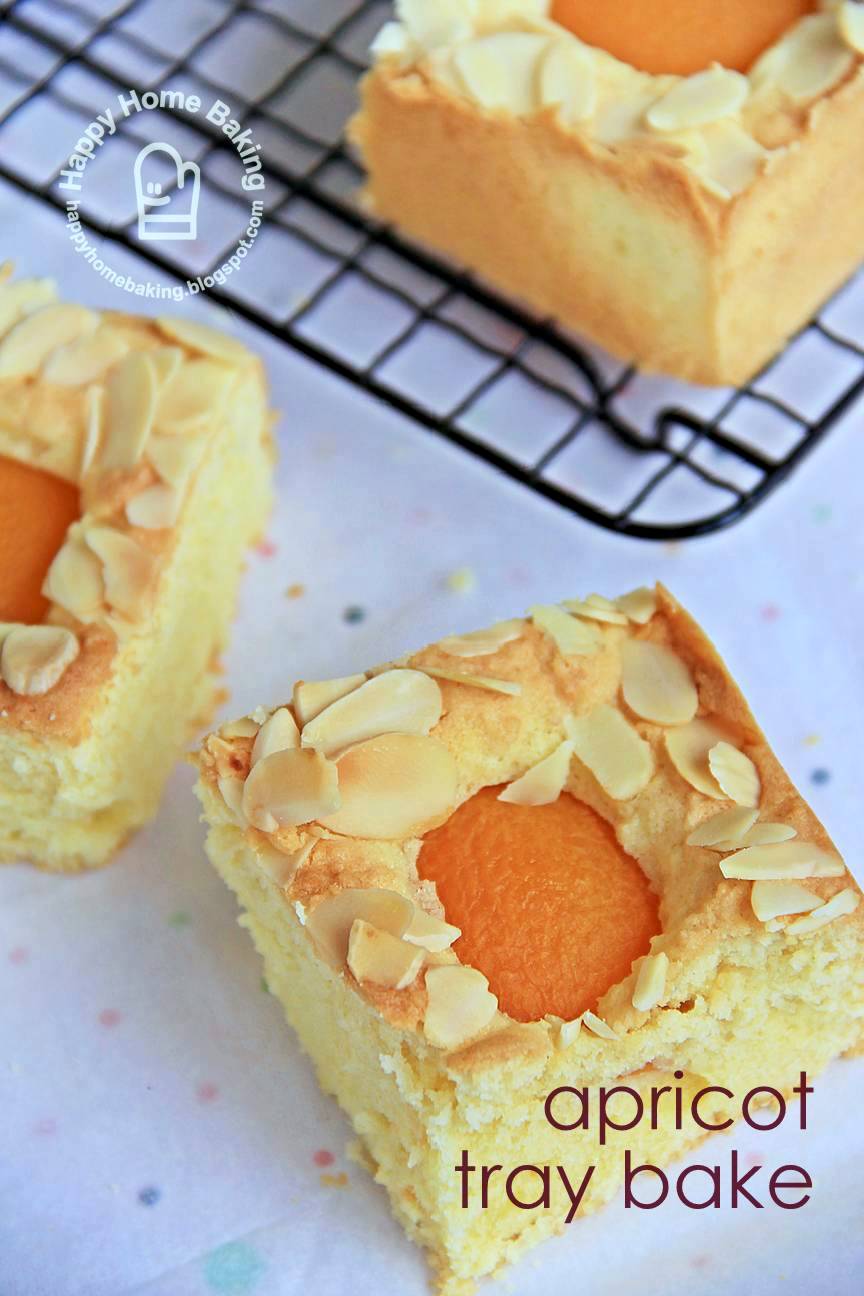 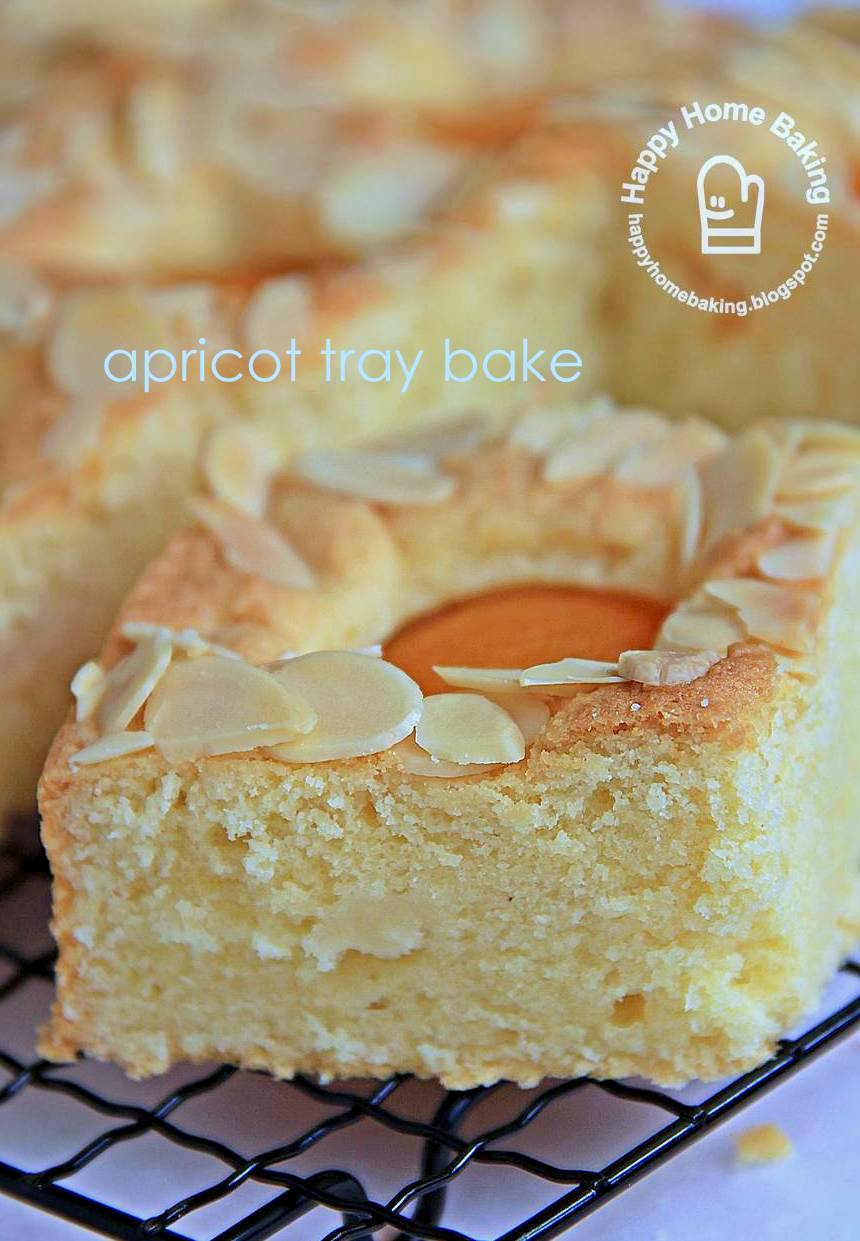 Even with the mistake I made, the cake still tasted soft and tender, although it appeared to be slightly more crumbly than my usual bakes. The texture was light and not dense as pound cake. I find the cake on the sweet side, but it went well with the canned apricots which tasted tangy! The ground almonds and almond flakes greatly enhances both the texture and aroma, making it a delicious and delightful homemade cake which I will bake again and again. 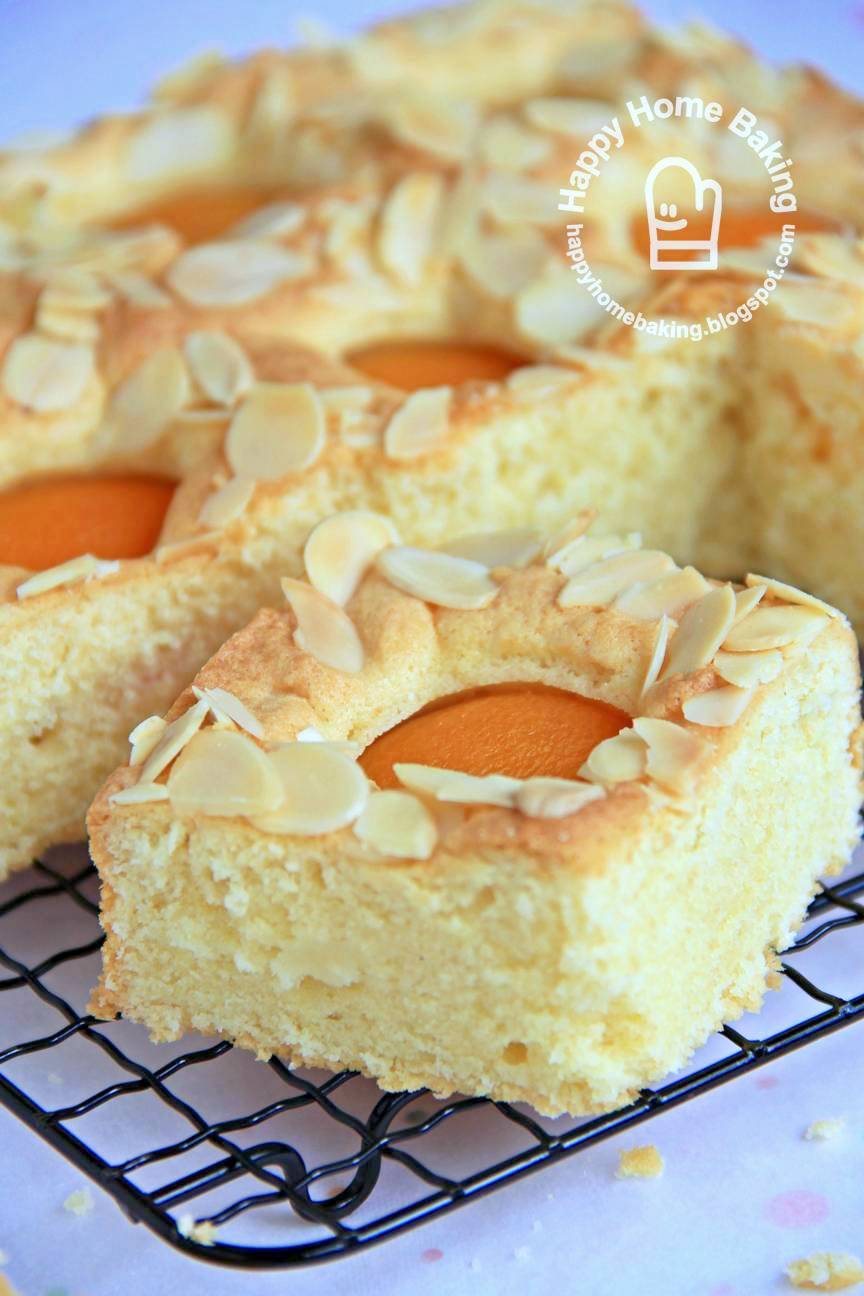 What a beautiful cake! Yeah, it is interesting the way the batter is prepared. I feel scared of adding flour last. I am afraid that I would not be able to fold it in properly.

Hi HHB, very lovely cake. Would love to try this one day.

hi, yeah i must say that square cakes especially when you cut it up looks very pretty and cute too, i also just stumbled upon a nice plum square cake here..just in case you are interested to look at , here's the link
http://zoomyummy.com/2011/01/08/plum-cake/

This cake looks so handsome I am already thinking of baking this to impress my friends at this weekend feast. I never knew there is even a book on square cakes.

This cake looks really beautiful and from the photo it looks like a good cake.

This recipe looks really good.I like cooking with apricots. I can't wait it give it a try.

I have the same cookbook too because the pictures are so pretty but yet to try to bake one, thank you for sharing, now I must make myself to bake one from the cookbook.

Phong Hong, I think for this cake, u don't have to worry about deflating when folding in the flour...unlike sponge cakes which can get tricky. Hope u can give this cake a try!

Kimmy, do let me know if u get the chance to try this :)

Lena, thanks for sharing the link, the plum cake is so lovely!!

The Experiment Cook, this is certainly a simple yet pretty cake to make for friends, great for taking to gatherings since u dont have to worry about refrigerating the cake ;)

Yummy Bakes, the cake is delicious...because of the ground almonds and the almond flakes :)

John, hope u get the chance to try it!

Sem, you have the same cookbook, thats great! I borrowed the book from the library and plan to try out a couple of recipes soon.

Making cake is my favorite. As a beginner before, It's a shame I can't make my cake shape perfect. Doing simple recipes like flourless chocolate cake made me improve my skills. And also thanks to this beautiful recipe.

This cake is so pretty, maybe I will try with canned peach instead since my kids dislike apricot. Thanks for sharing.

Hi Sonia, you can use canned peach but peaches are bigger than apricots so u could probably fit in 9 peaches in a 18cm square pan.

I might give that a go, it looks amazing. Your pics are great too, makes it look very tempting.

Beautiful, being from Georgia, USA (they're famous for their peaches) I will probably try it with some of the smaller peaches my co-workers grow. Thanks for sharing this recipe.

It looks so delicious!