I am not a food snob, and likely will never become one. I do not have a sophisticated palate since my diet is restricted to simple homecooked meals or cheap hawker centre food. I spent my growing up years eating to survive...how to live-to-eat if one's share of the dishes on the table is only one out of ten.


But, when it comes to egg tarts, I have to confess, I am a complete snob! I will never settle for anything that doesn't come anywhere close to those flaky, light and tender crusts with smooth, creamy fillings egg tarts from 金门饼家 Golden Gate Bakery...Chinatown...in San Francisco. I don't have the luxury to fly over 8000 miles whenever I need an egg tart fix. I don't even want to make my own since I know I will never get anywhere close to the ones I had. But, making a batch of egg tarts has always been on my to-do list...for the longest time...probably more than three years. I didn't even blush whenever I tell my elder son (who loves egg tarts of any sort) that someday, I will make him some egg tarts...


I have been gathering recipes since day 1 when I announced to my kid that I would make him some egg tarts. I bought those disposable, aluminum cups/moulds two years ago, thank goodness they don't come with an expiry date! I even took the trouble to bring them along to our recent trip...thinking I would have plenty of time to get down to this eggy business while we were away from home. I had even proudly showed the disposable cups to my kid, declaring to him that finally, we were going to have homemade egg tarts! Of course, the plan didn't fall through (^^')


While unpacking the aluminum cups when we got home, I told myself, this is not going to work. I had to do something about the way I procrastinate, it is almost becoming a habit. So, instead of writing up a list of new year resolution, I created a new to-do list for the year...this time on my iphone Notes app so that I will be constantly reminded to get things done. Top on the list is none other than egg tarts. I have planned to make them in the month of January, but I still gave myself a pat on the back when I finally retrieved a tray of golden tarts from my oven on the first week of February! Yeah!

As expected, my first attempt at making egg tarts was almost a failure. The crust was suppose to be flakey but it looked more like a short crust pastry but didn't taste like one. The recipe calls for making both the water and oil dough, but the crust turned out a bit tough. I don't usually blame my kitchen failures on the recipes, but this time round, the recipe is really at fault. The fat (melted butter) amount was not enough for the oil dough, I couldn't even form the dough, it was just too dry and crumbly. I had too add more melted butter in order to turn it into a smooth dough.

Making the crust was also quite time consuming as it calls for wrapping the oil dough with the water dough for each individual tart crust, and rolling and making the 'envelop folds' one by one! There is also something wrong with the baking instructions...it says, to bake them for 5mins, then cover the top with foil and continue to bake for another 30-35mins. I followed the instructions obediently, but what I got was a tray of tarts with very pale crusts. So, I extended the baking time for another 10mins. Even thought the crust was not golden, I had to removed them from the oven as I know any minute longer would be suicidal for the custard fillings. 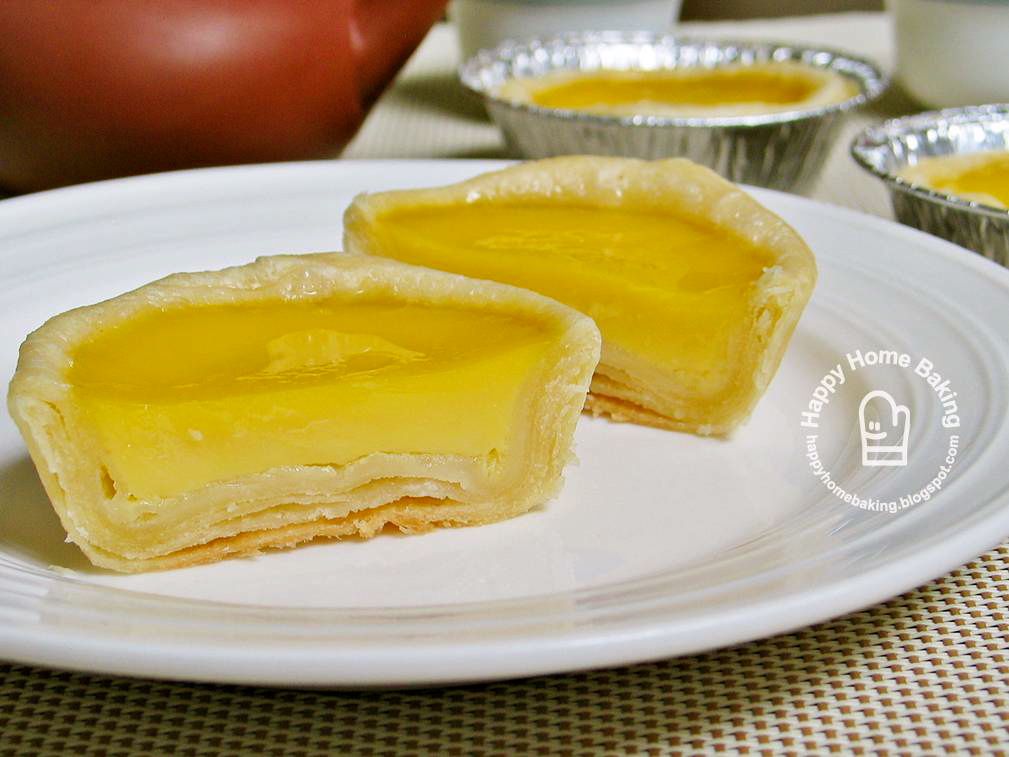 Fortunately, the custard was not badly affected by the prolonged baking. It was not as soft as expected, but taste wise, it was a 'pass'. At least it was not too sweet (I did the right thing to cut down on the sugar amount) and not overly eggy, thanks to the one teaspoon of vanilla extract.

I won't be sharing the recipe but I will be trying out another one, wish me luck! Just in case you are wondering...I had chosen this recipe since it is taken from a book dedicated to Asian delights, local food, snacks and nyonya kuihs. I actually bought the book just for the flaky crust egg tart recipe. What a great let down :(

HHB, I had some easy egg tart recipes over at my blog that you might be interested.

BTW, hop over I have an award for you.

I hear you. I've not had the confidence to try another batch of the tarts due to the difficulty in getting the flaky crust right. So now, I've resigned my egg tarts to a puff pastry base instead .... bad form. But luckily I'm not fussy when it comes to egg tarts. For what it's worth, I think your tarts look very nice and the filling looks beautifully smooth!

HHB,
Don't despair. It happens. What about your son? What did he comment about your egg tarts? Even though you were disappointed, your son probably thinks it's the best! Well, sometimes, we have to learn the "hard way", and after that, we just totally struck it off our list of recipes! :p

I'm eager to hear about all your tryouts about egg tarts. Because, I have to confess, I'm snob like you when it comes to egg tarts. In Paris, the best egg tarts can't compete with the standard egg tarts of Hong Kong...
And like you I told my son (who is fond of these tarts like me) that I'll make them. But after one failure, I quit... Perhaps that if you find the perfect recipe I'll try again...

I always get intimidated by tarts and pie crusts :( it really is too much work and then completely heart-breaking when they dont turn out as envisioned! But dont despair, keep at it and im sure ur very next attempt will be fabulous! must say, even in these tarts the filling looks gorgeous!

I am no egg tart lover (not even Portugese tarts) but if u come over to HK, I will bring u to eat all the supposedly FANTASTIC egg tarts raved by egg tart lovers all over HK and in Macau and u can decide which one is yr personal favourite. Also, don't sweat over them coz there are other much more yummy bakes to eat, way better than egg tarts! And I know it is the recipe's fault for this substandard batch, not yours!

Hi Edith, thanks for the recommendation, and many thanks for sharing the award with me!

Hi ping, thanks for sharing your experience with egg tarts :) I will probably try out 1 or 2 more times before I give up ;)

Jane, thanks for the comforting words! My kids gave the same comment...the crust NG, and the filling 'can do' lol!

clumsyL, thanks for telling me that I am not the one who has bad experience with egg tarts :) I do hope to get it right in the next attempt, wish me luck!

Swati Sapna, tarts are real tricky business! there are always two components to take care of...the crust and the fillings...

VB, I am no egg tart lover too, I only eat egg tarts with flaky crust ;) My elder son will be crazy if he gets to read your offer to bring us to savour all the various types of egg tarts...but then, if I do go HK, I will not waste my calories on egg tarts...there's just too many good food out there!

I tried 3x but failed too. Its never easy in getting the crust texture rite. Jia You and hope to see you recipe up soon.

google "best egg tarts" and there are some awesome ones around. Good luck!

Just hv a bite of each egg tart, and only proceed with another bite if it is worth it. If not, it goes into the bin (don't scold me lah!) In this way, can definately sample them all without filling yourself up unnecessarily!

I'm sure you will post your egg tarts soon!
And your son will love it coz it's the best egg tarts!

Many a time it is not about the taste HHB, but the love that counts in food, so whatever the tart looked or tasted like, i am sure your family would have appreciated your effort.

The tart looks beautiful, at least! Can't wait to read a recipe that you like!

Egg tart is one of my fav, and I go for any type hehehe, thou flaky ones are my most favour! I give you a pat on the back too, cos at least you dare to try the flaky tart skin, for me, I want to stay away from the trouble of folding and folding and folding :)
This attempt is good already. I love the smooth custard.
Jia you, I am sure you will succeed in the 2nd attempt. :)

I absolutely love egg tarts! When I lived in Singapore with my family, I think I ate one everyday because our flat had a bakery at the ground level. I count myself lucky! Good luck on your next attempt! :)

Hi HHB, the egg tarts look sedap! I agreed not easy to find one that's nice, I like those with flaky pastries and the egg fillings soft, like melt in the mounth type with the right sweetness....Good luck to your second attempt, Jia You! :)
Emily

I bought a cookbook from a reputable source only to have ingredients that don't add it, temperature missing and ridiculous portion, so I can understand your frustration.

I will eat the custard, process the tart base as crumbs for crumbled pie and banish the original recipe.

Happybowl, you are always so encouraging! really appreciate your time to leave your kind words and lovely comments here :)

TheChangingHouse, I hope to get down to it soon!

Sherlyn, I dont mind the folding part since I love playing with dough ;)

The Experimental Cook, yes yes, it is very frustrating when the instructions are not clear and the ingredient amount not right!