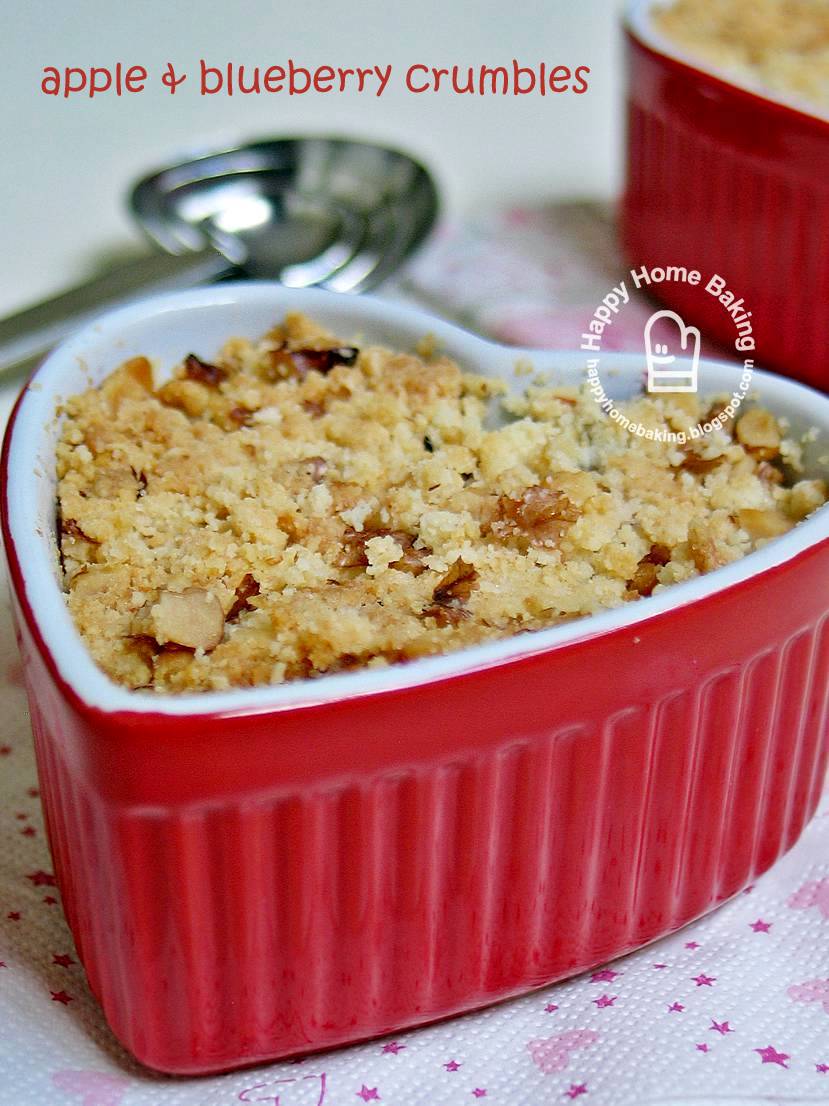 As mentioned in my last post, my digital to-do list is quite effective. My next new bake of the year is Apple Crumble. I tend to shy away with anything that requires cooking over the stove. But at the start of this year, I told myself that I should really really get out of my comfort zone. While going through the recipe, I had envisioned that cooking sugar with just 1 tablespoon of water would definitely cause the mixture to stick to the pot, and to make it worst, you are not suppose to stir the mixture before it caramelized. 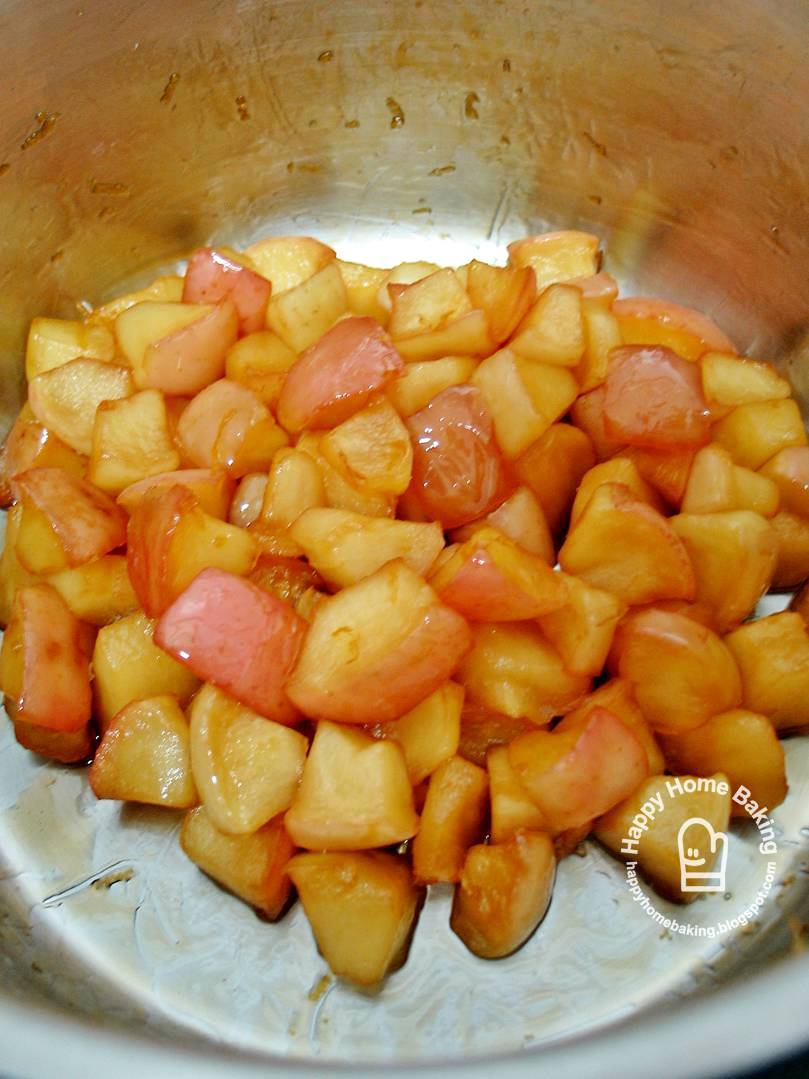 My initially fear of ending up with a pot of burnt apples was rather unfounded. The sugar mixture didn't even stick to the stainless steel pot I used. I have added in lemon zest to cook with the apple fillings even though it is not called for in the recipe I followed. My heart was skipping with joy when the filling was done ;) The cooked apples, lightly accented by the lemon zest, tasted just right...tender but not too soft; sweet but not too sweet. Half the challenge was completed! 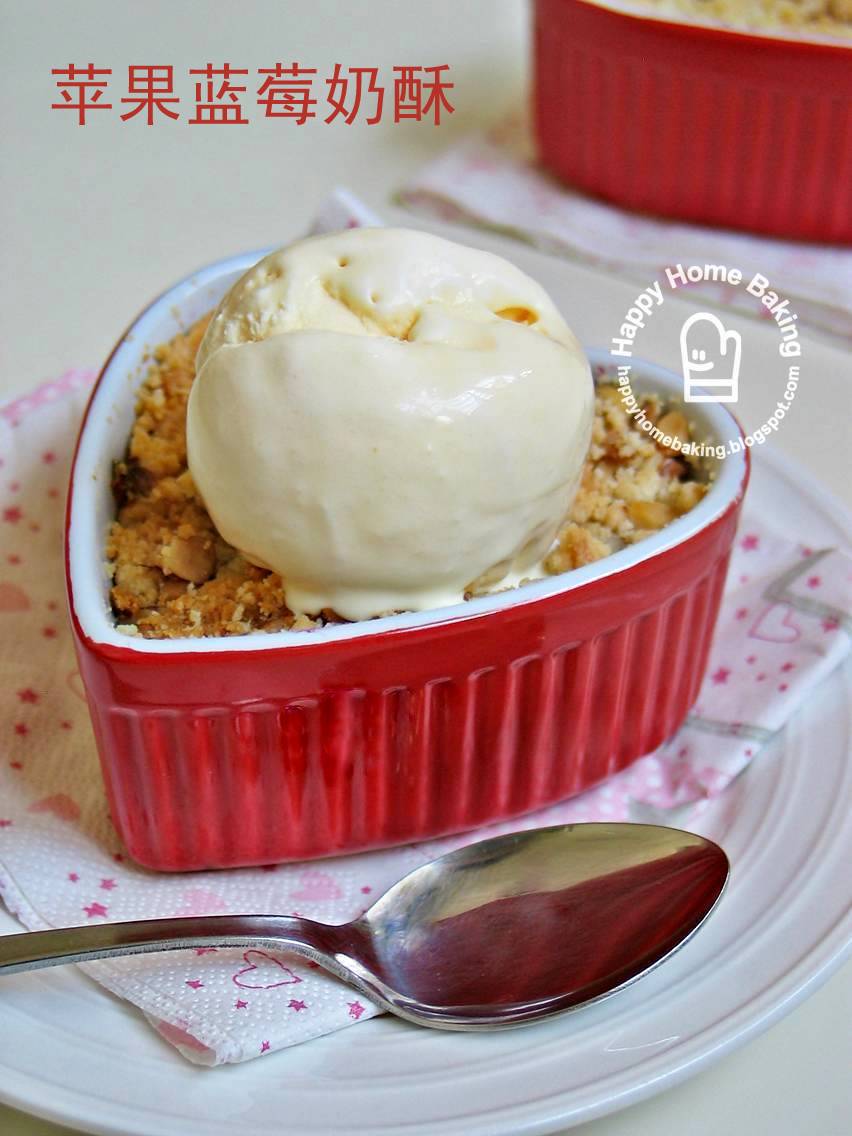 As it was the first time I was baking apple crumbles, not knowing what to expect, I filled the ramekins with the crumble toppings almost to the brim. Imagine my shock when I saw the toppings rised well over the rim upon baking. There was nothing wrong with it, but I needed 'space' for the scoop of ice cream to serve along with the apple crumble. So, once I took the ramekins out of the oven, I pressed the crumble toppings down with the back of a spoon. I would have press it down further, but the toppings started to fall off and I thought it was best to leave it alone. I left it to cool but when I went back to check after 5 mins, I was taken aback by another interesting sight...the crumble toppings sank further down the rim. I felt a little sheepish...I should have left it alone and let nature takes its course?


Believe it or not, this is the first time I have ever tasted apple crumble. What a delicious combo of warm apple fillings, bursting blueberries, light buttery crumbs that was full of flavour and fragrance from the almond powder and nutty walnuts! Needless to say, apple crumble with vanilla ice cream is a perfect match. Another discovery I made...the tangy blueberries became sweet even though it was not cooked with the apple fillings, I wonder what went on under those crumble mix when it was baking in the oven?

This is a certainly a crowd pleaser, great as after dinner desserts when you have guests coming over since the fillings and crumble toppings can be prepared in advance. I am sure you will have guests going gaga over your homemade desserts :)

(*the blueberries are not cooked with the apple fillings)

for the filling
for the crumble
to assemble
Recipe Source: adapted from Smile! 幸福小点心, 山王丸由利绘

It looks yummy!! Makes me hungry looking at it...

Wow, looks yummy, I must bake this! Love the ramekins. It's so pretty. Amy

Amy, I bought the ramekins at the local baking supply store, I almost missed it as it was hidden at a corner of the shelves.

Yvonne, don't worry, the sugar won't burnt...it was on a rolling boiling with so little liquid and yet it didnt stick to the pan. I am sure you can do better than me =)

Love crumble!! What a sweet idea for Valentine's day!!
Thanks for your beautiful blog!!!

I love crumbles. Yours looks fantastic. Thank you!

Look so delicious, esp with the ice cream ..... and I love the heart shape ramekin.

Warm crumble with vanilla ice cream is a favorite dessert! Also good with a pear/raspberry combo, or rhubarb in the spring (needs more sugar though). Here in Canada we often add rolled oats to the crumble mixture.

Ooooh, we love apple crumble! I have seen some short cut recipes that use museli (without fruit) as a topping, just for crunch... The 1st time I made apple crumble I didn't put a tray under the ramekins and the "juice" bubbled over and became a burnt crust on the bottom of my oven. :(

The timing is perfect. A valentine sweet treat..

Hi!I have just received the versatile blogger award and as per the rules i am supposed to pass it on to 15 fellow bloggers I liked. I have been a frequent visitor of your blog and really enjoy reading it.I would like to nominate your blog for "The Versatile Blogger Award" for its great content and versatility. You can find me at http://bake-a-mania.blogspot.com

Hi may I know where did you get the heart-shaped ramkins? It's really beautiful! Im going to bake this apple crumble for my boyfriend for his birthday!

Hi, I got them from Phoon Huat.