It has been a week since the start of the new year. We are happy to be back home and we even welcomed the heat. The kids are back to school and we are all busy adjusting to the new school term and getting ourselves familiar with the new set of routines.

My tween begins the new school term with a great hurdle in front of him. Like all his peers, to mark the end of their sixth year in primary school, he will be taking the national exam later part of this year. Whether a student gets to be posted to the secondary school of his choice would mainly depend on how well he performs at this nationwide examination. It is definitely going to be a tough year, judging from the amount of homework my child had to do on the very first week of school. 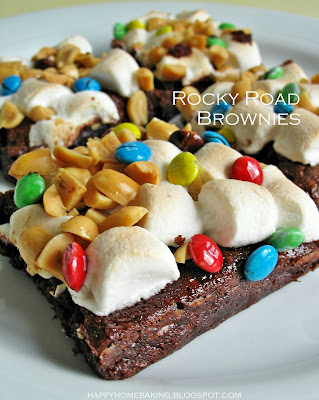 I bought a box of brownies mix when we were in Beijing. I had intended to bake a batch of rocky road brownies on Christmas day. However, I didn't had time to do any baking after a day trip to Simatai, (a section of the Great Wall). So, I brought the ready-mix, together with the marshmallows and M&Ms, all the way home, and now these rainbow brownies became my 1st bake for the year! What a sweet start! 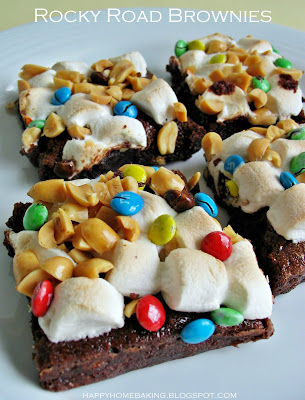 As with all ready-mix, baking out of a box is simple, fast and everything is done in a bowl. Like an obedient student, I followed the instructions to a T...including the part on stirring the ingredients together...with a spoon for about 50 times. I couldn't believe myself that I actually counted the number of strokes! Well at least I proved that the instruction is accurate, by the 50th stroke, the batter was well mixed with no traces of any of the flour mixture.

The brownies was done after 25mins in the oven, I took it out and dotted it with lots of marshmallows (I didn't have mini ones, so I used a kitchen shear to cut them into smaller chunks), followed by a shower of chopped peanuts and a light sprinkling of mini-M&Ms. I popped the pan back into the oven and waited patiently for the marshmallow to melt. I removed the brownies once the marshmallow started to brown. 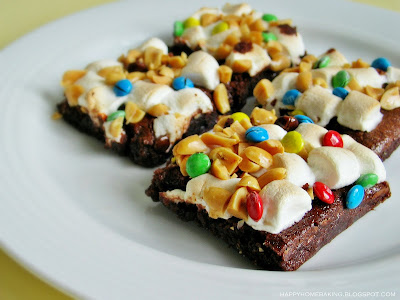 These brownies are terribly fudgy...dense, moist, gooey and a little chewy! My kids love it! I prefer the texture to be firmer so I kept them chilled in the fridge. The chocolate-nuts-marshmallow is a perfect combination of flavours and texture...you get sticky, crunchy, chewy all in one mouthful!

Even though it is going to be a rocky road ahead for me as well...as I would likely be operating like a single parent for most part of the year...I will be holding on to my boys hands and hopefully we are able to cross or maneuver whatever obstacles along the way.

I like your first bake... Even though the path may be rocky, with thought and love from Beijing, it will still be sweet and perfect.

* Hugs from Snowy Madison *
What a sweet start to the new year!
Best wishes to you for 2010 =)
That's Betty Crocker's Brownie Mix, right?

It is not easy being a stay at home mom, especially so when your spouse is not around due to work commitments.
加油哦！

Welcome home! Hope you don't miss too much of chilly Beijing.

Was waiting to see your first post of 2010...great bakes again!

it is not all that rocky. 2010 will be a better year ahead.. and your colourful brownie will defintiely bring smile, colours and excitement to your 2010 :)

Dear HHB,
You have the inner strength, resoucefulness, love for your family and you are not afraid of hard work - all these qualities in you will help to ensure that 2010 will become a good year for you whereby your lovely boys will benefit in the growing up process. I understood your situation well cos i was in the same - just that mine happened when internet, Skype, hp etc were non-existent. Neither was there much support from extented family or friends cos i was an "orphan". Let your mind dwell on things that is noble, right, lovely, excellent or praiseworthy. Staying positive when situations get frustrating/stressful certainly helped me alot.
HHB, your regular readers will also be with you to give you emotional support. If you need additonal help, dont be "paiseh", just ask, we will respond. Just like when we hv questions with the recipes, we will ask you. And you have always help by guiding us or directing to other websites for the answers. Hugsss :)
May

Hi May, thanks so much for your kind words :) Yes, it helps now that we have Skype and we are always a hp away. Your kind comments just come in timely as I had a major meltdown last evening! It is the usual way how my kids drive me up the wall.
It really warm my heart to wake up in the morning to know that I have friends out there :)

Just wanna let you know that you are not alone. I am facing the same situation as you. My hubby is outstation often and I am always alone to manage 2 kids. Not to mention I have to face work stress too. I have faith in you that you will be able to handle what comes may this year. From your blog articles, I can see that you are a great mum! Jia you! We have encouragements all over to help us pull through! :)

i follow your blog recently when i started my baking lesson... i believe readers of this blog start to follow your life and not only your baking...

we are all friend, in the blogsphere...

wish you a blessed year ahead, a wonderful and joyful one.. just like all your baking, full of color, full of love.

Glad to see you back home in Singapore.

I'm sorry to hear that Mr. HHB has to be away from home for the time being for work purpose. It may be for a long time. And, I understand the challenge to be faced without the better half by your side in raising children. And, I do know how it feels like without father by the kids' side. I didn't mean anything negative, I went thru similar situations when I was "alone" in the States. Of course, I was fortunate to be blessed with all forms of support from the beloved land far, far away ... I do believe that with the advent of better communications technology, it's made the world smaller ... We'll be taking to each other in just a few clicks away ... Just like what I'm now doing ... =)

So, no worries! Hang on there! Just let us know if you need any support! I know that you can pull it through with your two little sunshine! We're right behind you!

Happy New Year (though it's a bit too lale).

Ur first bake of the year is so nice and looks yummy!!

Dear HHB,
You have my email, so my 'listening ears'...anything you need, just give me a ring.

Dear all, thanks for stopping by to give your support and kind words of encouragement! I really appreciate it!

Hi lyekuan, yes, it is a betty crockers!

Hi May, thanks again for your 'follow-up' comments.

Hi Mui Mui, it is never easy to take care of kids on your own and still holding on to a full time job, I have been thru that before I became a full time SAHM.

Hi carcar, I know you, how can anyone forget a name 'carcar' ;p All the best to you for the year ahead. btw, I like reading your post especially those written in Chinese :)

Hi Pei-Lin, thanks for your comforting words, it is never easy to alone and thousands of miles away from home!
My hubby has all alone been outstation very frequently, sometimes weeks, sometimes months. I am actually quite used to it, but, this year (and probably the next few years) he would probably be taking up a long term assignment overseas, and due to time difference, it would be harder for the kids to be able to communicate with him.

welcome home! I'm sure yr son will do his PSLE well enough to get into a school of his choice.

Keep your heads up, HHB!

You have been a wonderful baker and mum... The toughest (and thankless) job in this world is being mum 24/7.

We are have our weak moments but it is part and parcel of life... peppered to make us stronger along the way!

Keep up your good work *hugs*

we r in the same boat this year ie our sons will be taking the dreaded psle in 10 months time :( can understand the stress of having to look after the kids on your own most of the time but i am sure u would be okay. judging from your previous posts, your boys seem to be v sensible. mine fight /quarrel the moment they open their eyes:(
anyway, hope you and your family have a great year ahead!
octopusmum

Hi octopusmum, I am not better off, I also have to put up with my kids constant bickering! You take care too, I believe parents with P6 kids are more stressed up than the kids themselves!

What a colourful start to the new year, great job! Really nice.

Hi HHB,
Nice looking blog you have here! It looks fresh, clean and clear! I like it very much! You've a good year ahead!

I seldom fancy brownies, they're just not my kind of choc cake. But yours sure stir some interest in me. :)

I'm sure you can handle it well. Jia you!

Hiya.. I tried bake the rocky road brownie but it's so hard to cut the cake nicely without the mashmarrow especially or cake stick to the knife. The cake is well cooked too. So how?? How to cut it clean n nicely..

Hi, you can clean the knife blade with hot water after each slice to prevent the marshmallow from sticking to the knife.