I love pasta. My family loves pasta. Plus, it is so simple to prepare, especially for a lousy (and lazy) cook like me. I take great advantage of my kids...the fact that they are not fussy eaters, I could feed them with pasta for lunch or dinner, anytime of the week. Sometimes it could be a 'lavish' seafood marinara pasta for dinner, but most of the time, I serve them fusilli with meatballs in tomato sauce, or a simple plate of angel hair with bolognese sauce.

My boys' favourite pasta meal got to be the chicken and mushroom spaghetti in cream sauce. 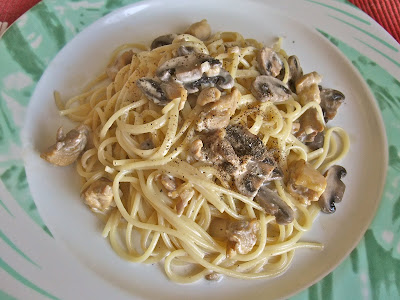 I have cooked this pasta dish using various methods. I have to confess that during those early days when I first started cooking for my family, I used canned mushroom soup as sauce ;) It was much later that I learned from some cookbook the proper way to make the white sauce...stir fry butter with some flour, before adding milk or cream. However, I could never achieve a consistent taste. Sometimes the sauce would be way too thick (and 'floury') and most of the time I had problem trying to dissolve the lumps of butter and flour mixture with the milk. If the sauce ended up too thin, I even tried adding cheese slices to thicken it! The best method I have since adopted is to simply cook the sauce using just dairy cream. Depending on what's available, I may use heavy or thickened cream which will yield a very creamy and rich sauce, but I prefer single cream (eg Nestle pouring cream) which is lighter or rather, closer to our Asian palate. 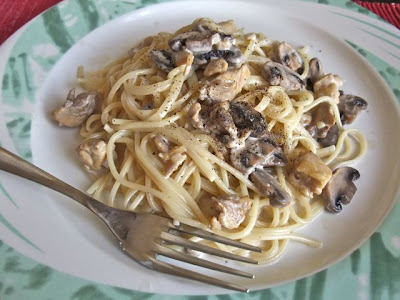 Most cream sauce recipes would only require salt and pepper as seasoning. I am not sure whether it is due to our Chinese way of cooking, I will also add light soya sauce. I know, it sounds like a weird combination, using soya sauce in a western dish. But I thoroughly enjoy that split seconds of my life, when my kitchen is perfumed with this savory, earthy aroma that is released the moment soya sauce hit the pan of sizzling mushrooms. I am also convinced that soya sauce will bring out the rich flavours or umami of the mushrooms. Yes, mushrooms are capable of delivering plenty of umami, or so called the 5th taste. So that is why, I can omit the chicken in this dish but not the mushrooms.

There is no surprise, with a rather sparse pantry, I am still able to whip up this simple everyday meal thousands of miles away from home. So here it is, my easy pasta recipe from this tiny kitchen in Beijing to yours. Bon Appetite!

1. Bring a large pot of lightly salted water to a rolling boil (I use only about 1 teaspoon for 3 ~ 4 ltrs of water). Add pasta and cook for about 8 ~ 10 minutes (or according to the directions on the package) until al dente. Stir occasionally to ensure even cooking and to prevent it from sticking. Check occasionally to see if it's done.

2. While the pasta is cooking, heat the oil in a large frying pan over medium heat. Add garlic, stir fry for a few seconds. Add chicken and stir fry until no longer pink. Add mushrooms to the pan, stir in soya sauce and saute till mushrooms become soft, about 1 ~ 2 mins. Gradually stir in cream. Simmer for about 5 mins, until sauce is slightly thickened and the chicken is cooked through. Season with salt and pepper.

3. By now the pasta should be ready. Drain the pasta. Immediately toss cooked pasta until evenly coated with the chicken and mushroom mixture (add 1 ~ 2 tablespoons of pasta water if the mixture appears too thick). Serve immediately, with a sprinkle of freshly grounded black pepper.

See, I knew it HHB!! You've always said you're bad when it comes to anything stovetop ... In fact, you aren't!!!

YAY! Your family and you can finally have a decent homemade dish!!

mmm That looks quite delicious.

I have all the ingredients for it too, I'll have to make that this week.

I'm going back home for Christmas in less than 2 weeks so I don't really want to buy any unnecessary groceries. I ran out of rice but have a box of pasta. The only thing I usually make is regular spaghetti, sometimes I eat it with chili on top.

love pasta.
especially vongole.
anything with clams!
love cream sauce too.
looking good over there. :)

Hi HHB
Thanks for recipe, now I can try to prepare cream based pasta for my family. I only knew how to use ready made pasta sauce from supermarket!
U seem to have a wonderful time preparing meals in a foreign land... just curious, do you have time for sightseeing then? I don't think I can manage cooking and 'playing' leh. You are so organised.

Hi HHB,
I love pastas too. And I love both the tomato base and cream base. Your cream base pasta looks really good. The way you made it looked so good and easy. Thanks for sharing the recipe. Yummy!

Hi Pei-Lin, that's the exact reason why I can only prepare such simple meals, I cannot handle anything more complicated than this!

Hi Jasmine, I always keep a pack of spaghetti in my pantry, it is so simple and fast to whip up a pasta dish :)

Hi Agapejen, we only go sightseeing during the weekends, we stay at home during the weekdays, other than the cold and dry weather, we spend our weekdays just like what we would do back home. I brought along the assessment books for the kids to do hor!

I love pasta too and I'm not fussy eater too! So can I have this pasta now?!! haha.. It looks delicious! I made them quite often too :P It's truly simple and fast meal to prepare.

HHB,
This is the best kind of recipe for busy mothers who still want homecooked food for the family!
I will topped this pasta dish with thinly sliced carrots and steamed brocoli to make a complete meal :)

I always prefer mushroom cream sauce than the normal tomato pesto. I love this. It looks amazingly good!

Hi HHB, I watched Julie & Julia on the airplane too. It is indeed a good show. I am also happy to see you back in the blogging world. I look forward to your baking entries. In the meantime, enjoy your holidays with your children.

Hello! I am a reader from Boston, USA. I used to study and live in Singapore for a long time. I really love your blog! The food you cook and bake are simply lovely and motivate me to cook (and bake) more :) looking forward to more of your posts!

with much love,
Linda

Hi Linda, thanks for stopping over my blog :)

hey HHB, its great, and lovely, seeing you have so many daring ideas on food, food, on more food, including goodies! but i'm thinking, why don't you ever post your family photo on so we can see you lovely family? HAHA, continue to venture in this foodie world, JIA YOU!

Thanks for this recipe:) i cooked it today following your recipe and it turned out pretty well! But the only feedback was it was not creamy enough. Any idea why is that so?

Hi Anonymous, thanks for trying out the recipe :) Could it be the type of cream you use? You need to use thickened/heavy cream (more than 30% of fat) to get the rich and creamy taste. Hope this helps :)

Thanks for sharing this wonderful recipe! My 2 boys (husband and son) love this and my son hasnt eaten so fast for a long time!This recipe is definately a keeper!

Hi Lilacz, thanks for trying out this recipe, and I am glad to hear that your family loves this :)

Hi HHB, can replace the cream with Yogurt or others? As I find cream is quite fattening but I love creamy pasta!
Rgs, carmen

Hi Carmen, I don't think you can replace it with yoghurt. However, there are recipes that use milk to make the cream sauce (melt some butter in pan, add flour followed by milk), just google and you should be able to find suitable ones.

I never use brown mushroom before.
I bought it ytd, but for the skin, do i need to remove the brown skin?
And when i remove the stems, i notice there is a lot of black black things inside? I should remove that also?

Hi, I am not sure what black things you are referring to...however, for brown mushrooms there is no need to remove the skin.

I just came across your blog an am in love with it!!!!May I know if is it possible if I used the canned mushroom, the Mili or Hosen brand? I'm a lil bit confuse with types of mushroom available at either NTUC or ShengSiong. So canned was the only mushroom that I've been using in my cooking.

Hi Siti, you can use canned button mushrooms. However, those fresh white or brown button mushrooms will give better flavour. The fresh ones are available at ntuc and sheng siong.

When you said brown button mushroom, is it shitake mushroom?
Thanks for your assistance!!!

Hi Siti, no it is not shiitake. You may refer to this link here: https://coldstorage.com.sg/shop-online/fresh/vegetables/mushrooms
Or google swiss button mushrooms. Hope this helps.

Thanks so much that really helps!!! Appreciate it!!!