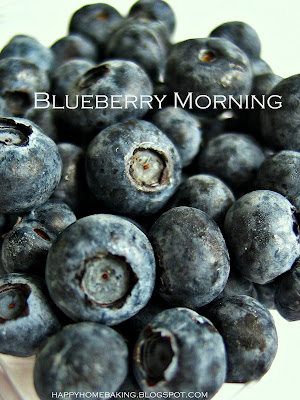 It's yet another blueberry morning. This time, I made blueberry pancakes for a late breakfast on a Saturday morning.

My younger boy woke up around the same time as me, and as usual, he offered to help me with the preparation of the pancake batter, while the other two family members were still reluctant to leave their 'sleeping clubs'. 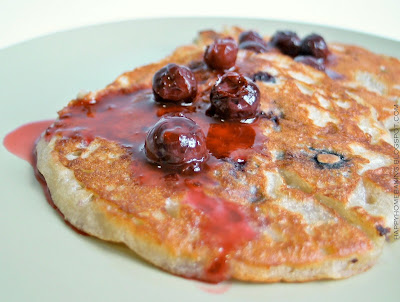 Making the pancake batter is not very much different from making muffins. Nothing too complicated that my seven-year-old cannot handle. He cracked and beat the egg while I measured out the ingredients. Then he got to sieve the flour mixture (one of his favourite tasks), while I get ready the rest of the wet ingredients. I handed the ingredients one by one to my sous chef as he mixed it all up in a bowl. Then it was the grand finale of pouring all the liquid mixture (I couldn't help but to agree with him that the mixture did look terribly awful at this stage) to the dry mixture and with only a few quick stir it was done.

After cleaning up the mess, I was left alone to cook the pancakes. I got lazy this time and didn't bother to brush the frying pan with melted butter. I thought it was really not necessary...what difference would it made? So I took the short cut by pouring some vegetable oil into the pan and simply swirl it around. The cooked pancakes didn't turn out as well compared to those I made on my maiden attempt, the surface was not evenly browned. It could also due to the temperature of my pan...I am just bad at anything that has got to do with the stove! The resulting pancakes looked more like roti pratas to me! 囧 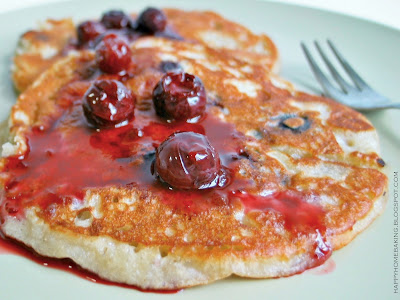 Despite the appearance, these pancakes were actually very delicious, especially with the homemade blueberry sauce which I made the night before. The pancakes were quite light and fluffy, but I would prefer a slightly thicker sauce. Maybe I didn't cook it long enough, or there was just too much water...even though I have already reduced the amount. I do like the hint of tangy flavour of the sauce though, and it was not overly sweet. My family members are a forgiving lot...they enjoyed the pancakes and there wasn't a single word of complaints. Even my tween who doesn't really care for pancakes was nodding with approval over his breakfast.

That night, my boys and I curled up in front of the tv to watch our current favourite Korean drama: Boys over Flowers (花样男子). I was watching with great envy when Ji Hoo (智厚) made some pancakes for Jan Di (丝草). He has finally perfected his pancakes. In the very 1st episode of this drama, Ji Hoo has asked Jan Di if she knows how to make hotcakes. She told him they were made with some flour and eggs, add milk and sugar. In the 2nd episode, he asked her if anything else was left out because his pancakes didn't rise. She told him he needs to add baking powder. I also found it amusing when he added that pancake premixes are actually available. Hmmm...I am not sure whether he used a pancake premix or the pancakes were made from scratch. But his pancakes looked perfect and delicious....urghmm...just before they were drenched with lots of maple syrup! ^^"' 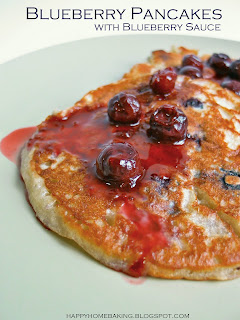 To make blueberry sauce:
Place blueberries, water, sugar, salt, lemon zest (if using) and lemon juice in a saucepan. Bring the mixture to a boil over medium heat. Let the mixture continues to boil for another 5 minutes. Add the cornstarch mixture and continue to boil till the mixture thickens. Set aside to cool, cover and refrigerate.

To make pancakes:
Sieve flour, baking powder, baking soda and salt into a mixing bowl. Toss in the blueberries. In a separate bowl whisk together the egg, sugar, yoghurt, milk, oil and vanilla extract. Add the liquid mixture to the flour mixture, all at once. With a manual whisk, whisk the mixture until just combined (when the flour 'disappears'). The batter may have some small lumps but Do Not over mix the batter or the pancakes will be tough.

Heat a frying pan over medium to low heat. Using a pastry brush, brush the pan with a little melted butter or oil. Pour about 1/4 cup of pancake batter onto the pan. When bubbles start to appear on the top surfaces of the pancakes (2-3 minutes) and the bottom is brown, turn it over. Cook until lightly browned (about 1-2 minutes). Repeat with remaining batter, brushing the pan with melted butter or oil between batches. Serve immediately with blueberry sauce.

Email ThisBlogThis!Share to TwitterShare to FacebookShare to Pinterest
Labels: pancakes

Wow.. this sure look great for a hearty weekend breakfast where i will have some extra time to spend with my boy to make this.. thanks for sharing :)

Your little one is so kind and helpful in the kitchen! :)

BTW, your blueberry sauce looks easy to handle. Is it a jam type or "watery" type?

I wish I could wake up to such a hearty breakfast too! If I want it, I have to DIY... absolutely delicious *slurp*

Hee hee Korean drama serials must be very popular in Singapore at the moment... a friend of mine just sent me an email to tell me how excited she was about getting her new discs from the DVD shop! :P The pancakes look lovely, definitely a weekend breakfast treat!

I can imagine the beautiful picture that a boy helping his mum making pancakes! The pancakes that make from the loves look really yummy!

blueberry sauce, interesting ....... a healthy alternative to maple syrup, i like it. will try it out. thanks for sharing!

Hi Ellena, I hope you and your boy will like these pancakes :D

Hi MH, the sauce is not as thick as jam...it is quite watery. If I were to make the sauce again, I would probably start with only half a cup of water, and add more water if the sauce become too thick.

Yuri, same here, everything is DIY for me, although sometimes I am lucky enough to have 1 or 2 helpers. My younger boy help me with baking, while the elder one help me prepares dinners.

CY, yes yes, K-drama is very popular...some dramas are great for ah soh like me!

Hi Grace, thanks for lovely commens, but it will be faster if I were to make them alone ;)

Hi Skinnymum, this is the first time I have tried making blueberry sauce...I like the taste, it is not sweet, but I am not quite happy with the consistency...I prefer a thicker sauce.

Pancakes looks sooo delicious perfect for a weekend breakfast :)
i made blueberry muffins adapting your blassic blueberry muffins recipe, came out very well, thank you for the wonderful recipe, have posted the same on my blog :)

Hi HHB, you are really a prolific cook... I can't post anything now as I am traveling... no cooking for 2 weeks, torturous. Did you get to bake the blueberry chiffon?

I think the pancakes brown very nicely actually. Look delicious for a great start in the morning :D

Warm homemade blueberry sauce is a real treat. I think the pancakes look great, I like mine just like this -- not too thick, just right :).

Lovely looking pancakes... they look somewhat like American Pancakes. Which, by the way, I absolutely adore! ;)

Is the blueberry yoghurt necessary, or can I substitute with natural yoghurt?

Thanks for another interesting recipe!

Wow, I've been following your blog for a while now and I have seen the Japanese version of Boys Over Flowers (Hana Yori Dango)! It was so good, anyways- those pancakes look delicious, I will definitely try out your recipe...

Hi Fai, yes, you can use plain yoghurt.

HHB, my kids love pancakes too. But to tell the truth, I've never tried making pancakes from scratch. I always eye for those shaker pancakes under Quick Sale in Cold Storage, then the lucky kids will have pancakes for bf...lol... I think one fine day I must really try to make them fr scratch.

I just found another kaki. I love 花样男子 too! Watch it over the TV also though I've finished the whole series. Hyun Joong is so adorable in the show! He is the main reason I'm watching it again. U watch the Jap version? IMHO, that is the best version compared to TW and Korean.

Hi. Have you done waffle before? Did waffle recently but didn't turn out well? Can share the recipe if you have one?

Hi WF, you should try making pancakes from scratch, it is much simplier than making a chiffon cake ;)
I have not watched the Japanese version. Hopefully it will be screened here soon :)

Hi Wendy, I have tried making waffles based on the recipe from this website, www.joyofbaking.com, you may want to give it a try. Hope it turns out well :)

Thanks for your awesome & extremely delicous looking blog, love it! Already tried to make melon pans once after tasting them for the first time in Hong Kong earlier this year and well in love with the result, thanks to your recipes <3 My next mission is try to make something out of durian paste my sis brought from Thailand as a souvenier, can you tell how it goes with cookies dough or/and peanuts or should I try muffins as you did?

Thanks again and happy bakings to you & family! :)

Hi Fan, greetings from Singapore!
I have not tried baking with durian paste. I have only tried baking durian muffins, Maybe you can try it with chiffon cake?

YUMMM! Blueberry pancakes are my favorite kind of pancakes, I'll definitely have to try this recipe!
Great blog :)

Oh, my mistake! It was durian _pulp_ you used for your muffins in this post:
http://happyhomebaking.blogspot.com/2007/04/durian-muffins.html

So meaby I go with the chiffon cake (or at least try my best) for my mum and sis later today. Thank you for advice! :)

Hi Dear,
Can I prepare the pancake mixture a night before in the fridge for use next day?
Or can I leave unfinished mixture in the fridge? Usually how many days can I keep?
Thks

Hi Fi Fi, I don't think you can make the pancake batter the night before...the baking powder/soda will react once it comes in contact with liquid. I also wouldn't advisable to keep the leftover mixture...I am not sure whether it will affect the texture.

Thanks a lot! Btw, I just made the blueberries sauce with 1/2 cup of water( taking note of your remarks). It turned out to be thicker n I am looking forward to make this blueberry pancakes tmr morning....yummy :)