Thanks to the numerous Korean dramas that we have been watching, I have been wanting to learn how to cook Korean dishes like dukboki (spicy rice cake) (this dish is featured in almost every single K-drama!), bibimbab and jajangmyun (black bean paste noodles). My elder son is especially keen to tuck into a bowl of jajangmyun. Just watching the characters in those K-dramas slurping away a bowl of thick, black, noodles would make him hungry!

As I can't even cook a proper Chinese dish, the only Korean dish I have tried to replicate at home was Kimchi Bokkumbap (kimchi fried rice). Since then, I only managed to venture a little 'further' by cooking a pack of Korean instant noodles with kimchi. I also attempted to make Korean pancakes with a pack of premix...but it ended up looking like seafood prata ;') 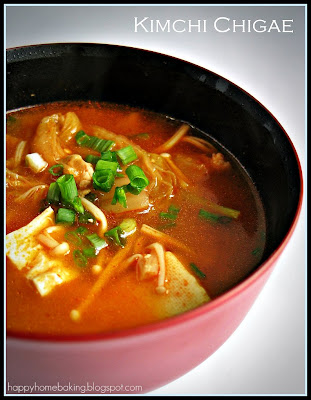 It was by chance that I came across this particular issue of a local magazine. There was this section on Korean food. I looked through the several recipes that were featured, and I was happy to discover that this Kimchi Chigae (or Jjigae) dish seems quite straight forward and easy for me to handle. I almost wanted to make this kimchi stew right away once I bought a pack of kimchi. (For local readers, I get freshly made kimchi from this Korean food stall/restaurant at Wisma Atria's Food Republic). Fortunately, I did a little search on this Korean dish and I realised that it will be better to cook it with older kimchi. So I waited for over a week (I couldn't wait any longer!), before I attempted on this dish. 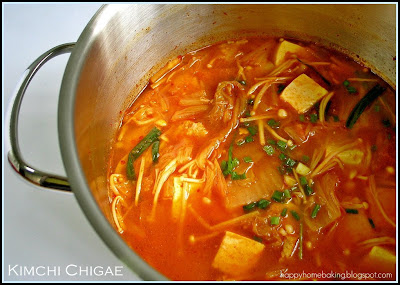 I was very satisfied after I finished cooking this pot of kimchi stew. It looked so appetising and tasted good! I adapted the recipe slightly as the original one doesn't include gochujang or Korean hot pepper paste. Since I have a tube of pepper paste given to me by my friend, I added a tablespoon to the stew. Most kimchi chigae recipes will also require the addition of gochugaru or Korean hot pepper flakes. However, since I didn't have that on hand, I omitted it. 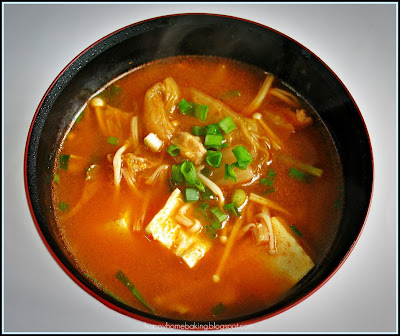 Although it was my maiden attempt, this stew turned out to be very delicious and full of flavours. It tasted much better than the one I had tried at a foodcourt stall which was way too sour for my liking. Even though my kids found the soup a little too spicy, they finished up all the ingredients in the stew. So, before I attempt on other Korean dishes, this is going to be a regular meal on our dinning table!

wow, I am drooling....I like to make this at home too but mine is a simpler version, just cook kimchi with chicken or ikan bilis stock and add in whatever ingredients I like such as fresh cabbage,tofu, chicken, mushroom, glass noodles.....

I feel hungry now, this dish must be very yummy.

Hi, I would like to check with you the pullman tin. Did you buy it from Phoon Huat? They have only 2 sizes and I bought the smaller one. Is that the same one as yours? I measure but it did not fit perfectly to the description that you have put up previously (7.5x4x4 inch). You know something, I borrowed the Baking book by Alex Goh from the library and many of the pages were torn off. Especially the bread section. So disgusting right? Haiz.... I even paid the $1.55 to reserve the book. Maybe I will go and buy from Popular when there is a 20% off then. Sorry to write all these here as I cannot find your email add from the blog.

How to cook Omu Rice?

Hmm...it sure looks yummy and easy to me! :) BTW, where do you get the korean chili paste or other korean products, if you don't mind?

Hi HHB! My bf likes these kind of korean soup! Is it a must to buy Korean chili paste and korean pepper in order to get the taste? Where can we get these korean condiments?

Hi Let's masak, wow your version sounds very exciting! Would love to try it out too :)

Hi Jane, yes, I bought the same size, the smaller one. As the pullman tin is a little tapered, I measured from the top which is about (7.5x4x4)
I understand how frustrated you were, I have borrowed many books that came with many torn pages! I don't reserve books, unless it is meant for my kids, I usually just pick up any books that are on the shelves.

Hi Choo, I may write a post on Omu Rice soon, BUT, I am not a good cook, so don't expect to learn much from me ;p In the mean time, just google for the recipe, I am sure you will be able to find many recipes.

Hi MH, Aimei, there are several Korean shops where you can get the chili paste and pepper. I have also seen some nutc outlets carry some Korean products. I usually go to this Korean grocery store at Burlington Square at Bencoolen Street...there is a Phoon Huat outlet a stone's throw away. There is also another store which I know of at Square 2, known as SOL MART. So far, I think the kimchi at the Korean restaurant located within Food Republic at Wisma is the best I have tried. I recommend that you try it...it's selling for $5 and comes in a plastic disposable container.
Aimei, it is actually a Must to add the Korean chili paste and powder in order to achieve a more authentic taste.

Hi HHB!
Thanks for your valuable infos! :)

Wow! This dish looks so yummy! Seems like you had a great success in making it!

I think you are really a good cook. The kimchi chigae looks very appetizing. I still don't know how to cook Korean food :(

Although i am not familiar with Korea Dish but I am sure this dish taste just a wonderful as it look... How i wish i can have thIs on a raining day weather... shioK shIok hehe... :)

Although it is common to use old kimchi for the stew, it seems like you wouldn't like it because you stated the preference of your stew (made with pretty new kimchi) over the one you tried in the food court (make with real old kimchi since it's sour).
Next time you make it again, it's probably better not to wait for the kimchi to get too old or your stew will be sour like the one found in the food court.

Overall, since you don't like sour stew, you won't want your kimchi to be old = sour kimchi.

oh my goodness! Thank you very much for this post. I LOVE this dish!I haven't tried to make it at home yet. I will give it a try. Thanks again!

we fall in love with Korean food after our holid there, always ordered in foodcourt if there is.

Hi Anonymous, thanks for the info :) I've learned that the older the kimchi the more sour it is. Yes, I certainly prefer less sour stew :)

Hi HHB
I tried this on last Sat, and my elder son asked for another pot on Sunday! Ha ha, he is just a 3 year old boy and to my surprise he likes this Kimchi soup so much! Thanks for the cooking idea. Love your blog, and now, I am addicted to bake and cook!

I am trying to make the Onigiri today.

Hi Min, wow your son loves spicy food?! I am still 'training' my younger son to take more spicy food! He finds this stew way to spicy for him. I am sure you will have fun making the Onigiri :)

These kimchi chigae looks truly succulent. I would love to have some of these. Thanks for this recipe. I an going to try it next weekend for invited guest. thank you for shearing your post.

hi there
i stumbled across this recipe while looking for a good, simple kimchi jigae recipe to use for the big pot of leftover kimchi i have had in my fridge for the last couple weeks.... it seems straightforward, simple, and tasty. i can't wait to try!

Got to thank you for this post. My sil used to bring over a box of Kimchi when visiting us. She bought a box at $8 at Auntie Kim's Korean Restaurant at Upper Thomson Road. I feel quite good and worthwhile buy.

Normally I couldn't finish that big box within two weeks, and they turned sour, I threw away the remaining one, though I do like sour Kimchi soup. What a waste! Now I know how to do with left over Kimchi, and will ask my sil to buy it for me again.

Thanks a lot for sharing! As a working mum, I cook favorite dishes for my kids and husband, clean fridge at weekends. But I haven't paid attention to these fine details. Your blog keep me learning these! Thanks.

Just tried this dish on Saturday. The kimchi I used is one week old only, my husband says that the soup suits his taste exactly.

Tried Lemon and rosemary roasted chicken too. The potatoes were so delicious. I omitted the last 15 minutes, after seeing it well brown. The oil in the plate is almost 1cm high, do you pour away the oil half way in the baking?

Tried Hanbagu too, the look is there, but the taste is ok. Probably because I use store bought minced beef. Did you try mince beef meat?

Thanks a lot for the recipe.

Hi emma's mummy, glad to hear that your husband likes the taste :)
I don't pour away the oil half way. I try to remove as much fat (under the skin, around the base of the neck area) from the chicken before roasting, as such I didn't collect so much oil ;)
I used store bought minced beef too...I don't own a blender or food processor.
Here's wishing you and your family a happy new year!

Thank you very much! Will try to do the same of removing fat around the neck area next time.

Don't know whether it takes much time if mincing beef by hand. All the rest of my family members love eating beef.

Wish that all your new year resolutions come true!