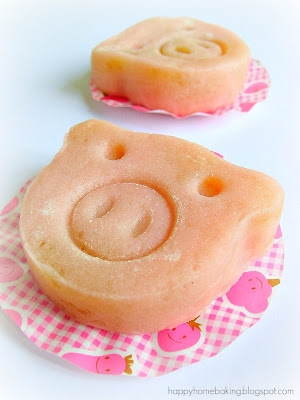 I always have the impression that mooncake-making is something that involves very complicated steps, very time consuming, and any effort to try it would unlikely pay off very well. It was only after reading a recent article featured in the papers that I learned that snowskin mooncakes are actually quite simple to make, especially when baking supply stores here are well-stock with all the necessary ingredients, including ready-made fillings. The recipe which was published alongside the article almost made me wanted to drop everything and rush to the nearest store to get all the items. Well, I got all the items a few days later...except one important tool, that is, a mooncake mold! I didn't quite like the designs of the molds available at the store, and I didn't want to buy one since I wasn't sure how the mooncakes would turn out. So I used a set of cookie cutters instead. This is nothing new, as I have seen several very creative bloggers use their Disney cookie cutters to shape their mooncakes.

When I told my kids that I was going to try making mooncakes for them, they too got very excited, and were very eager to help me out. Both had fun shaping the dough and the fillings into small rounds. I finds it very satisfying to release the finished mooncake from the cutter. It was also a surprise that they tasted really delicious, I certain didn't have any high expectations when I was making them! Everyone commented that the sweetness was just right. The snow skin was soft and a little 'QQ' which means chewy. The ready-made white lotus paste was smooth and not overly sweet. Those who have tried them were all thumbs up. Our first attempt at making mooncakes was a great success.

Before I went on to make the second batch of mooncakes with my remaining ingredients, I searched around the internet for other recipes to try. It was only then that I discovered that fruit juices can be used to replace the water in the recipe. So, for the second batch, I tried with this recipe here. I divided the ingredients into two equal portions...I used mango juice for one portion, and the other I experimented with pomegranate juice...both were what I had in the fridge. The pomegranate gave a pleasant purple tint to the dough. However, without the use of any artificial essence, the flavour was not prominent. I tried moulding the mooncakes with my Pooh cutters, but it was not as easy as I thought. I couldn't achieve a smooth surface, Pooh's face looked all cracked and wrinkled ;') In the end, I had to fall back on the piggy cutter. 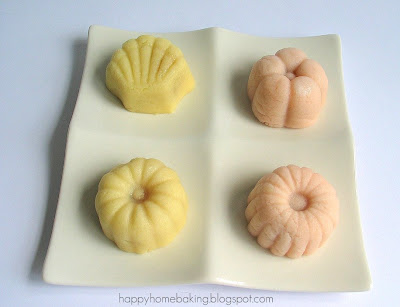 This is the last batch I made yesterday. The yellow snow skins were made with mango juice and I used strawberry milk to made the pink ones. Again, I didn't use a proper moon cake mould, instead, I used a set of improvised moulds...which happens to be my old plastic koniyaku jelly trays. 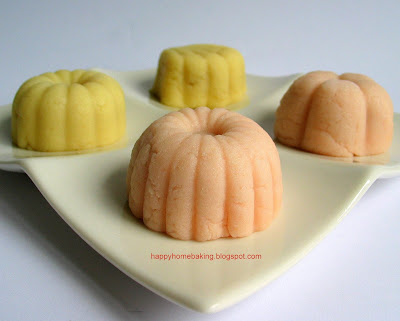 I have pretty much convinced myself that I should get a mooncake mould next year. It's very obvious that the surface of the finished mooncakes were filled with awful cracks. I wondered whether it was the way I mixed and kneaded the dough? Do I have to knead it longer in order to get a very smooth skin?? Furthermore, I read that the proportion of the dough to filling ratio should be roughly 40% : 60%. As such, I used about 20g of dough to 30g of fillings. However, I find that the dough was a little too thin for easy wrapping the fillings. We made this assortment of mooncakes and the kids were very proud to give them to their Granny. It was a good learning experience and I hope I can do a better job next year! 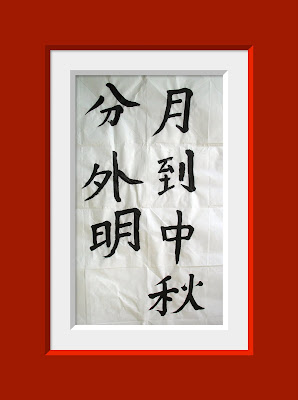 With this set of calligraphy done by my younger boy (yes, he stil has got a long long way to go before he could reach his brother's standard), I wish all of you who will be celebrating the mooncake festive today, 中秋节快乐!

these are gorgeous mooncakes.

Happy Mooncake Festival to you and yr family!

Happy Mooncake Festival to you and your family!

HHB, your mooncakes look really cute. Seeing so many bloggers making mooncakes makes my hands itch. Too bad, I guess it's too late to try them now. Let's make a deal, we must make mooncakes next year. Remind me ok! 中秋节快乐! :)

Get the moulds and try the baked one next year! It's fun! Seeing all your loved ones enjoying your homemade mooncake is well worth your "sweaty" times and effort! :)

Hi Skinnymum, Happy Mooncake Festival to u too!

MH, yes, yes, will buy the moulds next year!

Your little mooncakes are so adorable, HHB! Happy Mooncake Festival to you and your family :)

Happy mid autum festival... cute and nice mooncake. I wish i know where to get cooked glutinous rice, so i can try it....

Hi HHB,
You finally made your mooncakes! I thought you will miss it already. JIT isn't it? Very nice mini mooncakes too! These are more special than the normal moulds. So I don't think it matters if you really get the moulds next year. ;p

Very lovely mooncakes :) I like the color too. After the snowskin, you could move to baked ones next year! Happy Mid-Autumn Festival!

Using your cookie cutters to shape the mooncakes is such a clever idea! I especially love the one of the pig :)

Nice try. Maybe you just buy the mould now (but I think I like your current moulds better) and continue making ... guess since it is good food, everyone will eat it no matter it is mooncake fest or not.

Happy mid autumn to you and family too.

your mooncakes look great. Glad you took the leap in making these. Sure was worth all the effort!

Hey, I came across your blog and were surprised and impressed. You really know how to cook and bake. All looks so de...li...cious!

I've never heard of mooncakes before but these look awesome! So Cute!

oh my! these r really gorgeous and I think granny must be so touched to receive such nice gift! your baking and cooking aways impress me! Have not been spending this festival in spore for a while now but I have never really miss any food. But this year, I esp miss snow skin mooncake and your post is REALLY making me DROOL!
if u don mind, I will like to find out what camera u use? thinking of investing in a better camera.

Wow! Everything looks so cute *O* I love your blog, thank you very much for all the recipes!

dear pals, thanks for your sweet comments and kind words. It is so encouraging reading each of your comments. Even though I didnt do a good job, but your lovely comments really kept me motivated, thanks so much!

Hi libra_goat, thanks for dropping by! Looking forward to having you around :)

dear hayleynichols88, I do hope you get to taste it one of these days. I am sure you will like it :)

hi 4MalMal, sorry to make you drool :'p
All my photos are taken with this coming to 5 yr-'old' Canon Powershot G3 with only 4 mega pixels :( You won't want to get it!
My knowledge in photography is very limited, I dont even know how to use the functions in my camera. My photos are all taken with the auto-mode ;) I only know how to turn on the macro function, and simply point & shoot, under natural lighting, without proper flash, which is very unprofessional!

I always love your photo. Can you share the techniques; what photo editing are you been using.
tq

Would like to check if you reduce the icing sugar when you replace fruit juice with water?

Hi HHB
Nice moonies you hv there...
中秋节快乐
Hope its not too late hhehe
cheers

Hi Anonymous, I dont have any techniques...all my photos are point and shoot. I just set the camera to the Auto-mode...turn on the Macro function, and just take the photo. I have not taken any photography classes, and my knowledge in this area is really limited. As such I wont be able to share anything. However, I do look at cookbooks, and photos posted on flickr, to learn how beautify food photos are taken.

Hi ek, no I didn't redue the icing sugar, I used the same amount. The fruit juice I used is unsweetened.

Thanks My @ddictions! It's never too late :)

love your photos! and these look so delicious! do you happen to have any healthy baking recipes that i could try ? :)