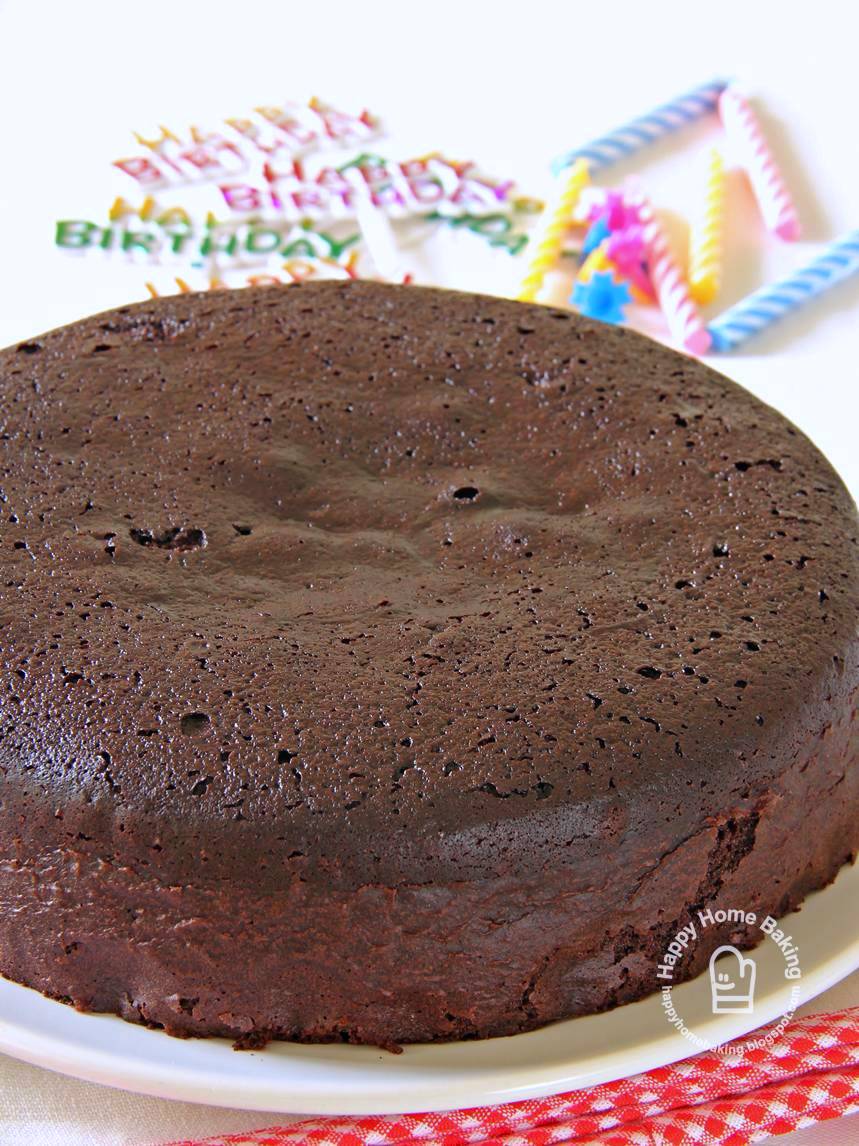 This is a fuss free birthday cake I baked for my teenage child. He didn't want to celebrate the occasion at all, but I thought we should all deserve a homemade treat on this special day. 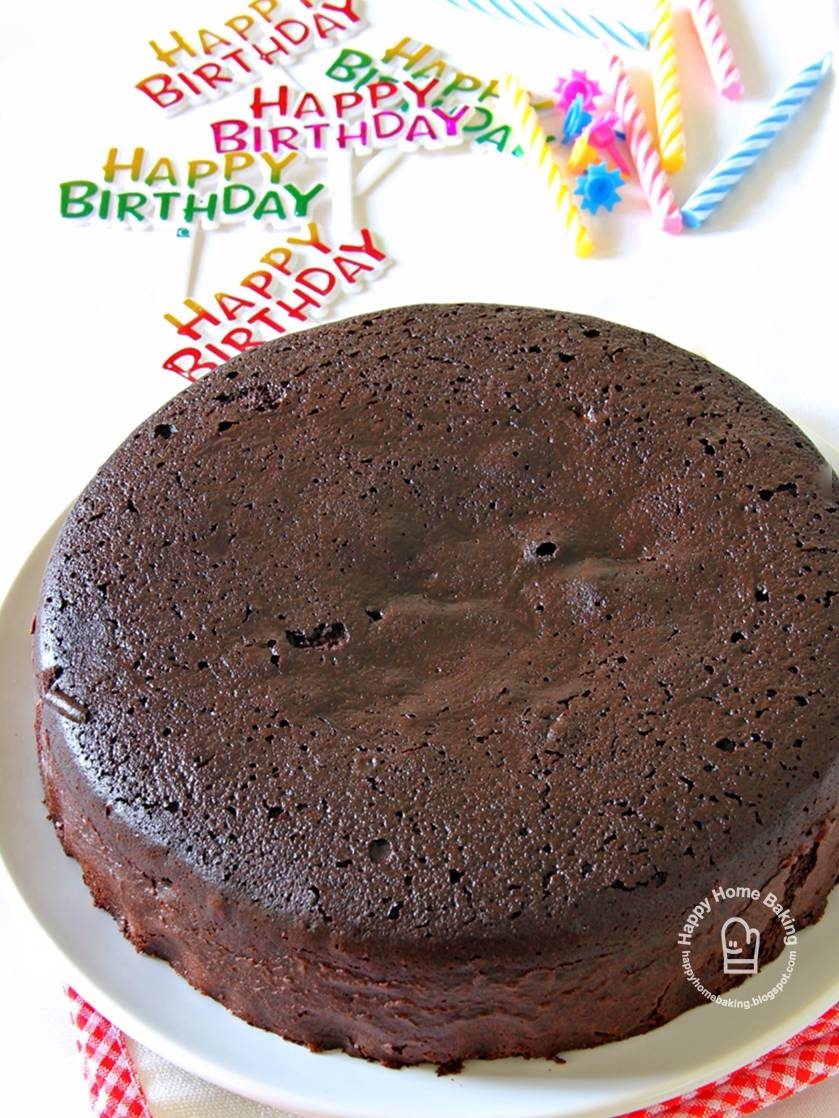 Over the years, I have learned that a birthday cake for any of my family members would always be a chocolate cake. I don't even have to ask. A chocolate cake, in any form, would be well received.

I didn't decorate the cake as my teenager wouldn't care too much. I didn't have to, as the finished cake was sophisticated enough on its own...both in terms of taste and presentation (just my personal opinion). The cake was made with good quality valrhona dark chocolate with 71% cocoa content. It lent the cake a rich and intense bittersweet chocolaty flavour that suit our palates. The top of the cake was brushed with liquor, the recipe recommends brandy, but I experimented with kahlua. The taste was rather mild and no one could detect its presence. I will try with rum when I make this same cake for my baking friend, hope the liquor flavour would be more prominent. The dark and poke marked surface may not look visually appealing to most people, but somehow, I have a weak spot for rustic, crackly looking simple cakes. The photo of the cake caught my eye when I was flipping through the cookbook. I bookmarked the recipe right away, although I must confess my cake was a far cry from the one illustrated in the cookbook. 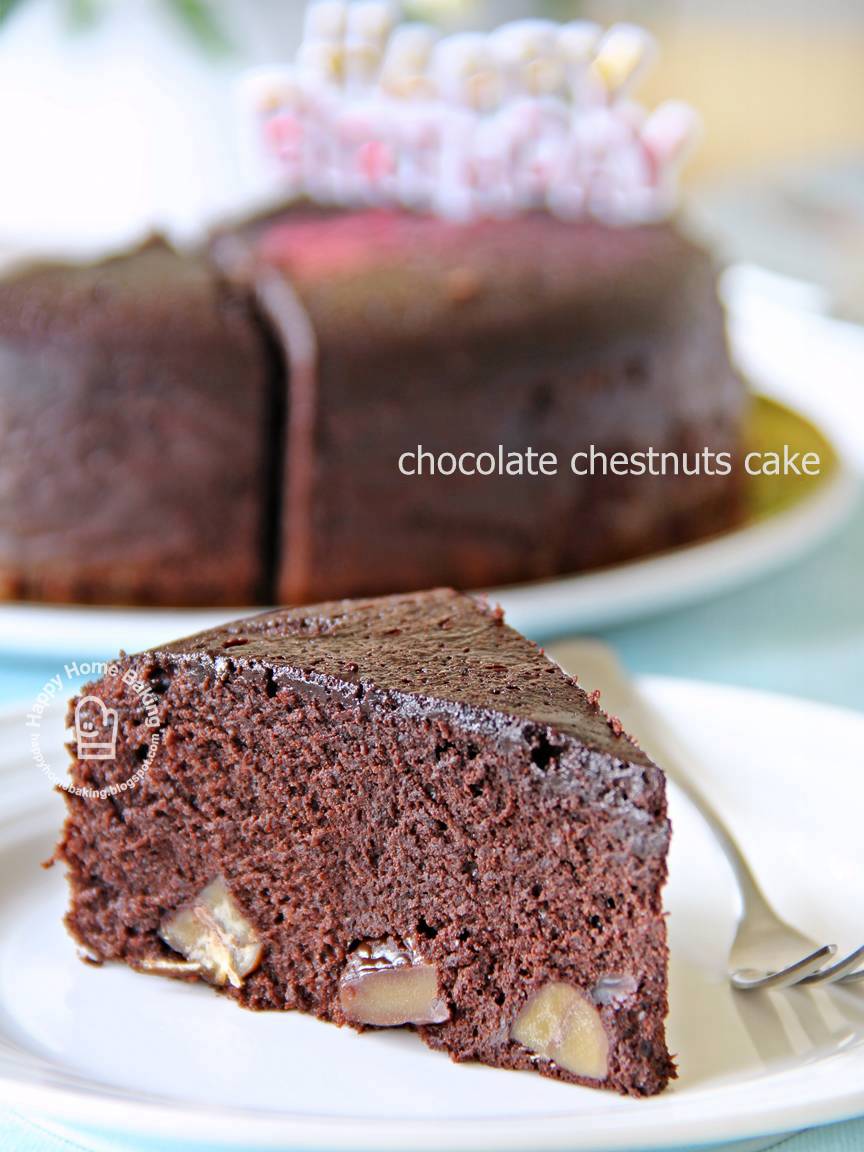 Another interesting ingredient that makes this cake special is the addition of whole chestnuts. I like the chocolate and chestnut combo since I love roasted chestnuts, especially those freshly roasted chestnuts from mobile roadside stalls(which sadly, can hardly be seen nowadays). My younger child who doesn't fancy chestnuts told me it is better to leave them out ^^! Nevertheless, the dense but velvety texture of the cake made everyone craves for a second, bigger slice. My sensible kids practised 'portion control' though...making sure there was enough leftovers for their breakfast the next day ;)

I should do this today - was thinking of salvaging my reputation after a horrible box cake recipe went badly. Maybe you should put the chestnut on one side of the cake so that the little boy who doesn't fancy it will be happy. I do this all the time to cater for my picky eaters on my pizza. It may look strange though. ;)

Hi HHB, can I replace the chestnuts with some other nuts. Will it affect the taste and texture? Would love to try this lovely cake esp. fuss free.

Always happy to see your new posts. Can I check if 20g of cake flour is correct?

Hi, thanks for reading my blog :) 20g of cake flour is correct.

Hi Kimmy, the texture shouldn't be affected if you were to replace with other nuts...however, as most nuts are hard, you may have problem cutting the cake into slices, chestnuts are softer. Otherwise, you may omit the chestnuts, it will be like classic chocolate torte.

What a brilliant idea! Whenever I cook sweet potatoes or pumpkin chunks with rice in the rice cooker, I would put on one side to cater to picky eaters, I've never thot that this is applicable to baking too :p

Hi I fell in love with this cake upon reading your post :)
But I dont quite understand this: make sure the bowl is able to sit above the water and it should cover the pot so that steam will not get inside the bowl. Is this done double-boiler method?

Hi Yummy Bakes, yes it is double boil method. Hope you will like this cake :)

can I check if this cake can be covered with Fondant?

Hi Sunflower, can't comment on this as I have not tried it.

this looks DELICIOUS. thank you for sharing! i'm your new follower, here is my baking blog if you're interested! =)

Hi HHB, I have nominated your blog for the 2015 Versatile Blogger Award. Please look up my post on this for further details. Thanks.

awesome.. Thank you for the information.

Do you think its a good idea to mix some ripe fruits like banana in this recipe "Chocolate and Chestnuts Cake" make it more delicious? I love fruit cakes but found really tough to make it more tasty and airy.

Hi Kirti, the texture of the cake will likely be affected, it will probably be too dense.

Ooo wow . Yr choc cake looks delicious and I do agree w ur teenage so. No need to frost or decorate. Looks great on its own. Wish I can hv a piece. Happy belated b'day to yr son.

Thanks for the kind comments and well wishes :):)

Wow Yummy Cakes... Cakes are always a part of any occasion...
Thanks for sharing this post.
Glorious Food