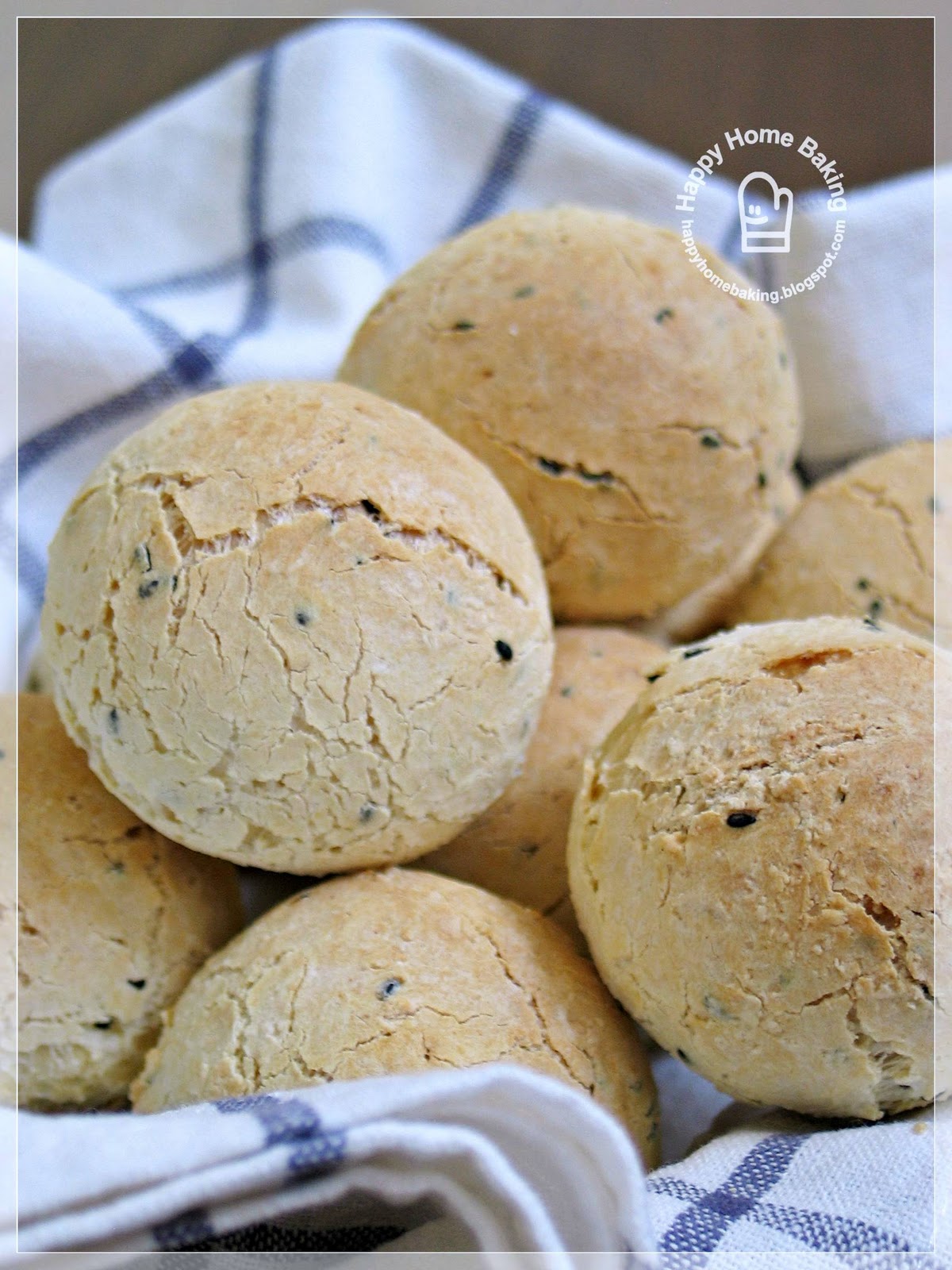 These lovely Korean mochi bread buns came right out of my oven on a late Sunday afternoon.  I wanted to bake something badly, but I didn't have too much time or even the energy to lift up a manual whisk. 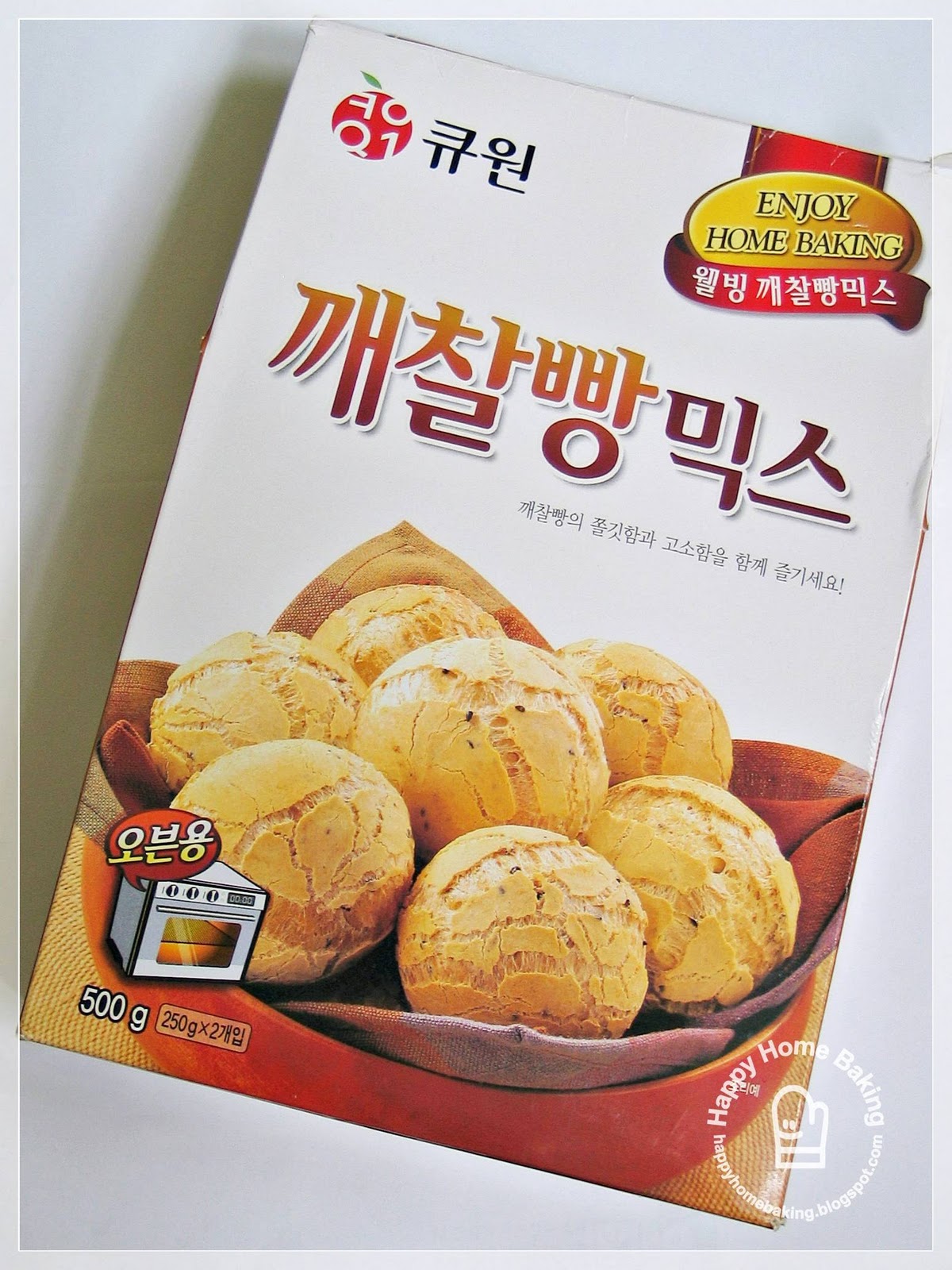 To quench my thirst for baking, I turn to this box of premix I received months ago. I emptied one of the two packets of the flour mixture into my mixing bowl, cracked an egg and added it into the bowl with some water. I mixed the mixture with my hand and I noticed that the dough was quite dry. I was tempted to add some more water but kept working away, and eventually I was able to gather up the mixture to form a nice smooth dough. The dough wasn't sticky or oily, it was so easy to work with. I divided the dough into nine equal portions and shaped them into little round balls. I let them rest, covered with cling wrap, while the oven is preheating. Just before I popped them into the oven, I sprinkled some water all over the dough. I suppose this is to make the crust crispy, just like making French breads. 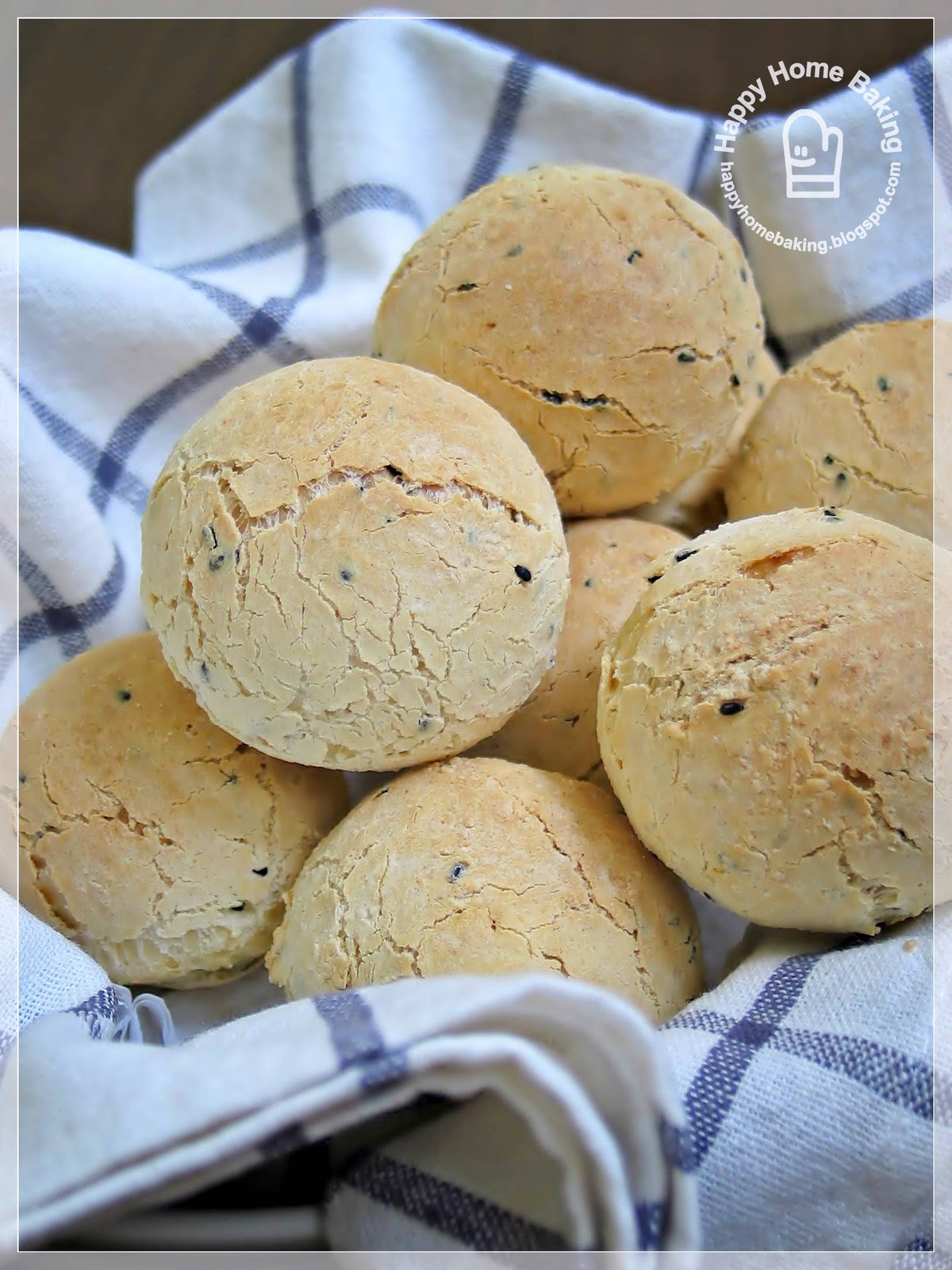 35 minutes later, I was rewarded with a tray of crackly plump balls. Also known as black sesame tapioca rolls (tapioca flour is listed as one of the ingredients), these buns have got a hard but thin crispy crust and the inside was soft and very chewy. 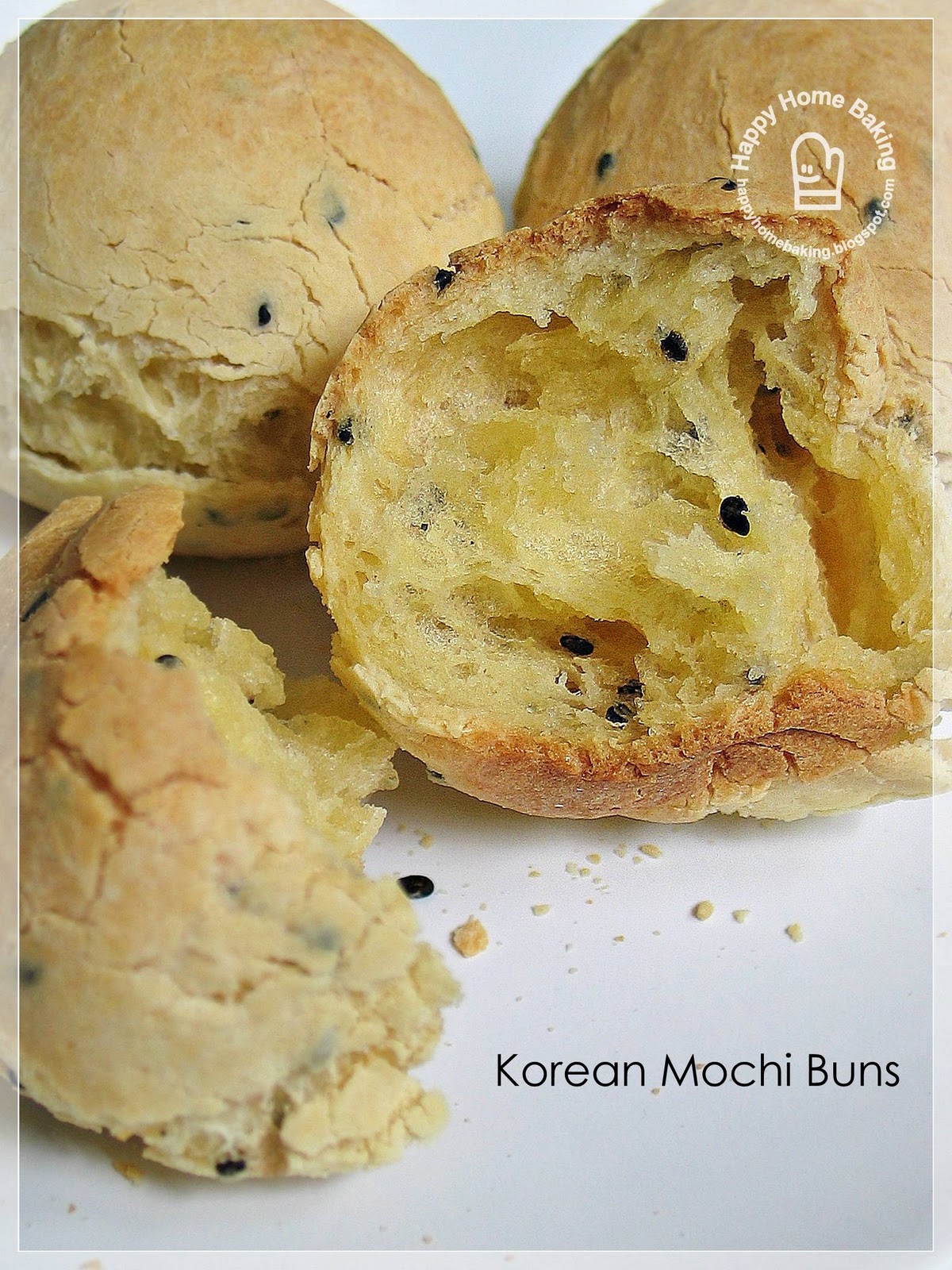 It was the first time I have tasted a Korean mochi bread. The bread is not sweet at all and it doesn't have much flavour except for the black sesame. It is almost like eating a plain but chewy bread roll. They tasted really good when fresh out of the oven, and I would pair it with a cup of latte or something sweet such as hot chocolate or milo.

In case you ask, I have seen similar mochi bread premix ($9+ a box, comes with 2 packs) at the following Korean grocery shops here. To my delight,  I also happened to come across the Korean omija tea (read about it my earlier post here) at these two shops :)

I have also included the recipe here as the instruction printed on the package is in Korean. 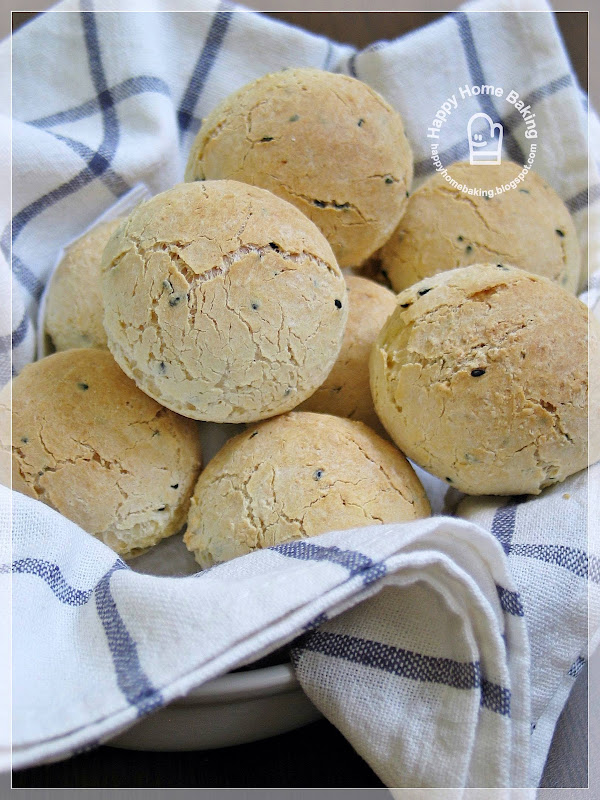 Method:
- Mix flour, egg and water in a mixing bowl. Gather to form a soft dough.
- Divide dough into 8 ~ 10 equal portions. Shape into round balls.
- Place doughs on baking tray lined with parchment paper. Cover with cling wrap or a damp cloth, leave to rest for about 15mins.
- Spray the doughs with some water.
- Bake in preheated oven at 180degC for 30~35mins or until golden brown.
Note: These rolls taste best on the day they are made.

the buns looks fabulous! ah i know where to get the premix now HHB! thanks for sharing!

I have never tasted a korean mochi bun though I heard about it and read some raving about it from some bloggers. Urs look very very good, just like those shown on the box of the premix.

These look very interesting but pretty. bet they are great dunked in coffee.

I have tried the exact mochi bun premix which I bought from parkway parade. They really taste good, especially when they are fresh out of the oven and slathered with butter!

I love these during my korea trip last year and now thanks for sharing and i can try to make some at home le.... :)

I am looking for an oven. Mind to share your new oven performance? Tks!

I have never heard of korean mochi buns, but it sounds interesting and looks very good...! Thanks for sharing :)!

I never try korean mochi buns but saw it from some of the blogs, looks good.

HHB, is this same texture as those in Sun Moulin?

Hi Anonymous, so far my Bosch oven is working well, it is the basic range of build-in oven. The temperature is quite constant and the muffins I made were evenly browned, I do not have to turn the tray around half way into baking.


Hi Edith, pardon my ignorant, I have not been to Sun Moulin, and I have not tried any store bought mochi bread, these homemade ones are the first time I have tasted such buns.

hi HHB, it's my first time seeing these koean mochi buns..they look lovely and i thought those were fillings inside..must be good!

Hi HHB,
Thanks for your advice on the oven. Have you tried the 3D hot air function for multiple trays baking? How is it? Is there a digital temperature display? Appreciate your feedback as I am very tempted to buy the same model too:) By the way, in which country is this model manufactured in?
Tks,
CF

Hi CF, there is no digital temperature display. There is only a digital clock and a digital timer. You can set the oven to turn it on and/or off at specific time. Yesterday, I tried the 3D hot air function to bake two pizzas. Both were able to brown evenly at the same time (although one pizza was baked at a upper rack, and the other was at the lower drip tray). It also takes a shorter time for the oven to preheat when using the 3D hot air function(basically it is just top and bottom heat plus fan to circulate the heat). I have also tried the fast heating function, it is good if you just want to warm up your food. I use it to warm up my muffins before serving. I have yet to try the grill function. It is not stated anywhere in the manual, but I think it is made in Germany (I recalled seeing it on the display set at Harvey Norman, Millennium Walk). Hope this helps :)

Hi HHB,
Thanks again for sharing the information :)

Thank you so much or sharing where to get this! i had been searching high and low for the bread premix for YEARS! altho i had to admit that I'm not very persistent in looking. :P

Hi there. I'm a new fan of your blog. I particularly enjoy reading your bread recipes. I came across this recipe sometime back and bookmarked it. Thought u might want to explore doing those mochi-like buns from scratch. From what I read online, these Korean and Japanese mochi cheese buns are south American influenced (from the Japanese migrants who settled in brazil and went back to japan thereafter). I'm not sure if it's the same but here's the link http://theindolentcook.blogspot.com/2010/09/pao-de-queijo-brazilian-cheese-bread.html - shaz

Baking Fiend, I am not sure whether this is the type you are looking for...apparently there is another type of mochi bread.

Shaz, thanks for the information, really appreciate that :) They look similar to me, probably the texture are slightly different.

hi i've seen these mochi buns in a bakery in hong kong. However their buns were cheese and green tea flavored. I was wondering for your recipe is it okay to add cheese or green tea powder in it? By the way, they look amazing~~

I have been looking for the recipe for a while. Thanks for sharing it. -tien

Hi Onko, it was a gift I received.