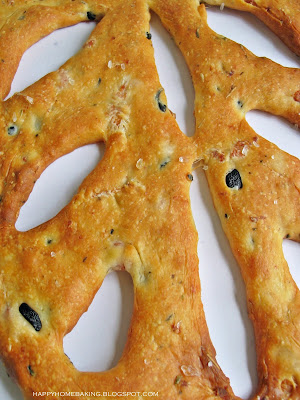 Although it is almost close to two months since I last wrote a post on bread-making, I had actually been baking bread on a regular basis. I keep going back to the usual recipes that I am familiar with. The ever tasty and soft Hokkaido Milky loaf, the very versatile Milk loaf, and the savoury Bacon and Cheese loafare some of the few regulars on our breakfast table. 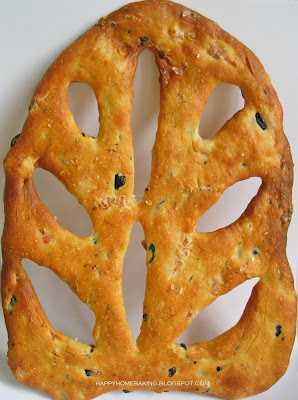 After taking a short hiatus from baking, I thought I should get out of my comfort zone to try something new. I have been keeping this fougasse recipe since I borrowed this book from the library. I have seen this pretty bread from several cookbooks, but as it is a French bread, most of the recipes I came across require it to be made with a starter. I was happy to be able to find a recipe that uses a straight dough method. 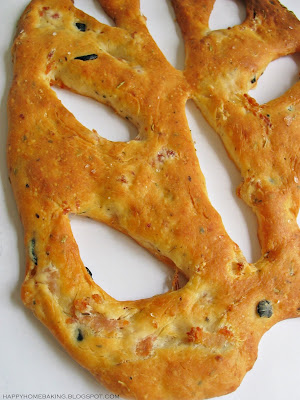 Fougasse, originated from Provence, is a type of flat bread filled with olives, bacon, onion or herbs, not very different from the Italian Focaccia. It can also be made like a calzone, with fillings stuff inside the pockets made by folding over the dough. For the flat bread version, it is often shaped and slashed to resemble a leaf or the tree of life. 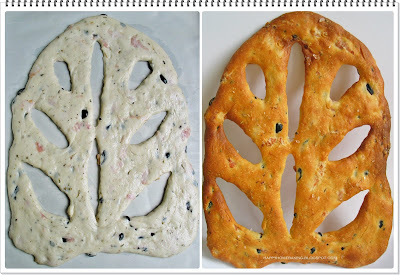 Base on the cookbook, the same dough recipe can be used for making focaccia or pizza. Since we have only 1A2C at home, I halved the original recipe and also added some dried mixed herbs to give it more flavour. I followed the instructions to roll out the dough into 5mm thickness. As a result, the fougasse turn out to be very thin and crispy. I was expecting something much thicker :( 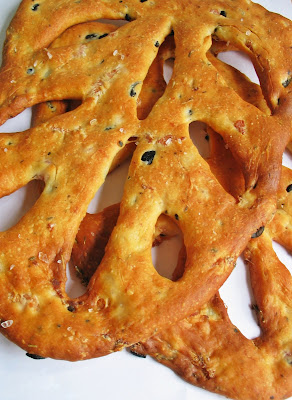 I do not know how fougasse should taste like since this is the first time I have ever tasted it. Although I like the flavourful savoury taste, I would prefer a thicker bread instead of a crunchy texture, it was almost like eating some bread sticks! Well, at least I was compensated with the lovely and distinctive aroma emitting from the black olives and bacon when the bread was baking in the oven.

To enjoy the bread, I served it with cream of mushroom soup. Upon cooling, the bread hardened and it was so crispy that my kids broke it into pieces and drop them into their soup, just like croutons ^_^"'

I have posted the recipe here for those who are intersted to give a try. However, I would remind myself not to roll the dough too thin the next I were to make them again.

I've never heard of this bread either, but good on you for trying it anyway! Are there many french bakeries in Singapore? Maybe you could pop in and compare yours to theirs!

This is sth new to me too but I am sure I will like the savory taste.

Hi!!Your fougasse looks delicious...I've never tried it yet, so I couldn't help!! I don't keep a blog, this is why you couldn't access my profile!It seems to me I don't have anything to blog about...I use gmail and the account to leave comment!! cheers Martina

Thanks for the reminder! I've got the book and yet, I missed it! I'm so going to look out for it! Thanks for sharing!! =)

I've just heard about a new hearthquake just out of Sumatra.It's been said that it's been felt in Singapore, too. Hope everything is allright and everyone near to you is safe. A warm hug to you (and to all the people affected)
Martina

wow, I see somebody loves playing around with the dough.. LOL. Nice bread..

dear Martina, yes, the tremors from the earthquake off Sumatra island were felt by many people here. My place was not affected and there were no injury reported. Thanks so much for your concern :)

what a lovey piece of bread, it really looks delicious, good job!

Hi HHB
Out of curiosity, have you ever try using the breadmaker to do Pau? Do you think it's possible to use it to do the kneading part?

Hi, I'm sorry I have not tried making pau so I am unable to comment on this.

Fougasse actually meant "leaf." So technically speaking, any bread shaped in the same form can be callws fougasse. The most common fougasse is cheese (Gruyere or hard swiss, VERY tasty).

Even though the 2nd proof time is listed as 20-30 min, let it proof until is is elastic to the touch. To keep it soft & fluff texture, pad the dough down w/ your hand, roll out lightly so it is rectangular, cut, pull the opening apart, proof, bake & enjoy!

If you can find Peter Reinhart's The Bread Baker's Apprentice, it has a pretty good recipe for Fougasse. My old chef was an apprentice of him, many of recipes are the modification of his. It works wonderfully! Strongly recommended!

Hi Sugar Temptress, thanks so much for the useful information :)
I have read Peter Reinhart's book, and have been keeping several of his recipes but I have yet to pick up the courage to try it!

I know some of Peter Reinhart's recipes can be very intimidating when look at. Give it a shot, it is not too bad, it is still basic steps w/ modification. You had made some very nice breads, I am sure you can do it w/o any major issues! :)

Tested the recipe last week. It is very crispy like a biscuit. My mistake was I put the dice cheddar cheese in the dough making it hard to roll. Thanks for the tips of pulling the slits apart. I got nice leaf shape. Next round must roll thicker and put grated cheese.