Ever since I started cooking for my family, I have been cooking dishes 'anyway' I like. I don't usually follow recipes closely and I have a tendency to take short cuts. Things started to change after I read a Japanese-Chinese cookbook. It is a great book, with many step-by-step photos to illustrate how to go about preparing the ingredients for cooking. It provides many useful tips and explains why certain steps have to be adhered to. It even includes details on when to turn up or turn down the heat while you are cooking the dish. For the first time, I was very disciplined and followed the recipe of a hamburger patty to a T. 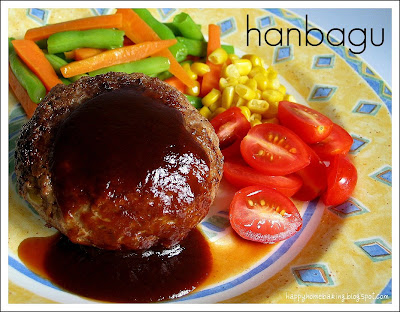 This Hanbagu, the Japanese version of a hamburger, is served on a plate and not sandwiched between a bun. Besides the basic salt & pepper seasonings, eggs, onions, and bread crumbs are also added to the ground beef. Unlike most beef patty recipes I have seen, the minced onions are first sauteed before mixing with the meat. Although it seems like an extra step, I thought it is a good idea as I believe my kids would find the taste of the sauteed onions more bearable ;) For a quick and simple weekday lunch, I served the hanbagu with some blanched french beans, carrots and cherry tomatoes. Thanks to the clear cooking instructions in the book, the meat patties turned out to be very juicy. The patties were 'steam-cooked' midway...this helped to retain the juice and yet ensured the patties were cooked through. I was quite skeptical about the instructions for making the sauce though. There was no cooking involved, the sauce was made simply by mixing some ketchup with Worcestershire sauce...it was too simple to be true. I tasted the mixture and it gave a real yucky taste! Nevertheless, I trusted the cookbook and went ahead to serve it with the hanbagu. To my amazement, the sauce actually went quite well with the meat patty! It tasted as if it was prepared with red wine?! As expected, my kids love the hanbagu, but made noise about the sauce :( I guess it would take sometime for them to acquire the taste, so in the mean time, I would have to look for another recipe for the sauce.

hi...this is the first time i am posting a comment on your blog although i am an avid reader :)

this looks delicious...very simple yet mouthwatering. can't wait to try it too :)

haha, follow the recipe closely, sounds like the advice given by dear cyber fren of ours, vb :) i'm also learning it cos i'm so used to "anyhow" cook ... good job with hanbagu!

Hi, I made these last week as well!! Maybe you would take a look at my recipe based on another japanese cookbook. I am happy with my recipe as the worcestershire sauce taste isn't very overpowering. Cheers

hi rheag, I'm so glad that you left a comment...otherwise I would not have discovered your blog :)

Ellena, do give it a try, but it would be better if you make your own sauce.

Hi Yuri, I've never really liked cooking...I have no one to learn from and so I have to rely on books, and you would probably know that most cook books are not really meant for beginners :(

Thanks Happy Belly, I'll certainly try your recipe the next time I made these!

this looks very tempting especially with the sauce on the top, yum!

don't know where else to ask, but do you butter the sides of your chiffon tin before baking and unmold the cake from the tin once it's cooled?

Hi Jenny, do not grease the chiffon tin before baking. The batter needs to cling on to the side of the ungreased pan to rise. Once the cake is removed from the oven, invert it immediately. Let if cool off completely before unmolding.

hmmm...that looks very tasty indeed! i'm sure cooked onions were more palatable to children as they're not as strong as the raw ones.

i gave you an award if you want to take a peek in my blog!

I tried this recipe and it was delicious! The patties were really moist and juicy. I find the sauce to be a little strong, so I added some water and sugar.

Thanks a lot for the recipe!

thank you for the advice.
i'm excited to try one of your chiffon cakes and hope for the good results!

Mouthwatering indeed. Thanks for sharing such a nice burger.

can u share where u got the book from?

wow...i might just give this a try! it looks simple and delicious. definitely something i can handle. is it possible that I can make it medium rare?

Hi Eliza, thanks for the awards!!

Hi Yossita, glad to hear that you like this recipe too :)

Hi Jenny, I look forward to hearing great news from you :D

Hi Twistlyn, I borrowed the book from the library.

hi, i've tried your recipe and it was really great. can't wait to try the other recipes posted here in your site.

May I ask wat is the bread crumbs to use? Is it normal bread broken into some little crumbs or something tt's specially made for cooking? Kindly enlighten me, thanks

Hi Anonymous, bread crumbs are usually use for coating meat before deep frying. You can take a look of the description over here: http://en.wikipedia.org/wiki/Panko
Hope this helps :)

Thanks for letting me know abt the bread crumbs. I cook this for lunch today and it is SO YUMMY :) My husband who normally doesnt like beef ate a big patty by himself. Thanks for sharing the joy of cooking!

Hi Anonymous, I'm glad to hear that you like this recipe too :)

If you make them at meatballs size you will get the traditionall Swedish meatball, same as they sell in IKEA.
The sauce for swedish meatballs (Köttbullar) called brown sauce.Do Becahmel, put some meat fondue + soja sauce, mix a small amount of wheat flour with cream until solve and add to sauce. Putt the rest of cream and season with salt & black pepper.

Hi cyber kitchen, thanks so much for the info! Your tips will certainly help me when I try make Swedish meatballs on of these days :)

just want to say a big thank you to you for sharing this recipe...i tried it last Sat and the patty was really very juicy and not dry at all. Mine is a bit salty though as i have added more salt than required...The sauce is great and my kids like them. will make them again!

Hi Octopusmum, glad to hear that your kids like these :) This recipe is indeed a keeper, I have use it to make hamburger patties and recently I made meatballs pasta with this recipe. It was really delicious!

I made this over the weekend, and my hubby and kids love it - two thumbs up from them. My elder daughter thinks that it is much better than those from Hard Rock. Thanks for making me feel like a super duper mummy!

Do have a great day ahead!

i agree it's a bit tempting but i don't think i'll trry it though.

This is a really great recipe, I've never made burgers so tasty before. It's definitely a keeper. I used 500g of beef mince, dried onion flakes since I didn't have any fresh onion on hand, used 2 small eggs and more salt. I microwaved a small amount to taste test so I could get the flavour just right before frying. Thank you so much for sharing!

Hi Maiko, thanks for sharing how you have made your burgers :) You can try mixture of beef and pork...as pork has got more fat, and that extra fat will make the burgers even more tasty ;p

i am going to make this again this sat. but from previous experience, the qty was too much. may i know if it is okay to make the rest into meat balls, then freeze them?
tks
regards
octopusmum

Hi Octopusmum, although I have not tried it, I think there shouldn't be any problem freezing them. If not, you can reduce the amount by half. Nowadays, I will mix half portion of ground beef with half portion of ground pork (from meat with some fat, not lean meat). The taste is even better as the fat from the pork will make the meat balls even more juicy.

wow, you are really fast with your replies! thks for the advice

HI HHB
i mixed half beef half pork and yes, the patty was juicier but not sure why, we were v thirsty the whole day after that. it wasn't salty at all so i really don't know the reason. it was okay the first time i cooked this...do u happen to know why?
thks
regards
octopusmum

Hi Octopusmum, I don't know the reason why, but I don't think it is due to the mixture of half pork and half beef. Could it be due to the sauce?

HI HHB
i didn't make the sauce this time round..it is okay, thks for the reply!
regards
octopusmum

Hi, I'm writing from the Netherlands. i've discoverd your blog yesterday. I like it very much! Btw, we have the same plate :) Check my blog! What a coincidence :))

Wow! this hanbagu looks delicious....easy to make, this tasty juicy meat dish can perfectly accompany a juicy gossip at any party. I am going to make this on my anneversary.

Hi. Thanks for all the wonderful recipes. Can I replace breadcrumbs with oats ? Tks.

Hi Jen, no, I don't think you can replace the breadcrumbs with oats.